A cannabis factory containing 500 plants was discovered by police officers who smelt it from the street.

Every room, apart from the kitchen, in the rented house in Wallisdown, Bournemouth, had been adapted for the cultivation of the drug.


Officers became suspicious before even entering the property on Monday because of the strong smell coming from it.

Dorset Police are urging landlords and the public to report any suspicious activity after the discovery.

Det Con Billy Bulloch said: "Around 500 plants were being watered by hand and no doubt the man who we're looking for was the gardener.

"Looking at what we've found here it's quite apparent that someone was living in the kitchen area where we found a camp bed and other personal items. I suspect that a man of oriental appearance may have been looking after the plants."

Police believe the factory may have links to similar finds uncovered in the south of England. 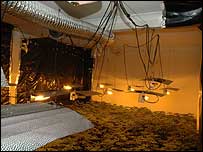 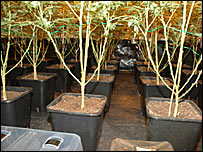 Beautiful Scrog there. Shame to see it go.
T

Wow thats alot of weed gone to waist. What a bummer.