Not much luck germinating but got 3 to take. They are now 5 weeks from seed. Used paper towel method of starting one batch, had to soak the second bath then use paper towels. They seemed to bust open and then stop growing.
But these three remain. Now in FoxFarms Ocean Forest. Using PH down since my water even rainwater is between 7.8 and 8.0 ph. Used some slight amount of Cal Mag and Root Grow. Under 400MH in a 20 x 36 inch Virtual Sun tent.
Using a fan on constantly and an output fan to pull cool air through. Using an AC unit in the window next to the tent for cool air which then pulls through the tent flap opening. Trying to keep temps at 75 degrees plus or minus a few degrees. Here they are... 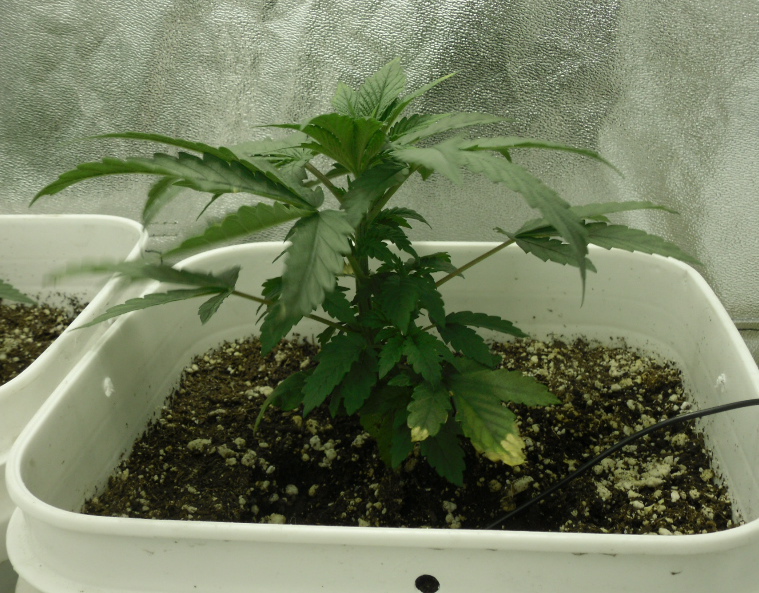 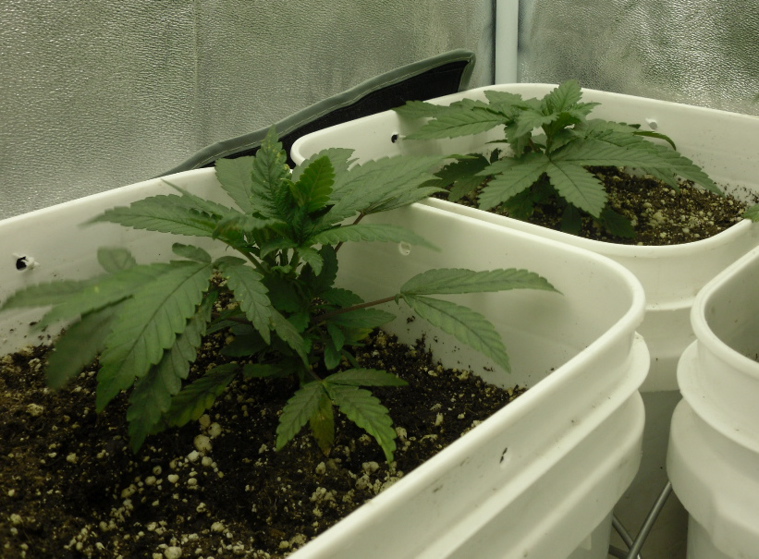 Oh yeah. Using 18/6 lighting. Have been reading many use 24/0. Thinking about switching, what do you think?
R

Definitely switch, no good comes from lights out in veg!

Thanks LeftHand. This is my first AI grow and I never had a problem germinating seeds until this time. But I am looking forward to the finished product. Next grow, Eight Miles High.

6 weeks from seed, 3 weeks since transplanted. A few yellow spots on the leaves , maybe a little deficiency? But waiting until the soil dries out before adding any water. Huge adjustment to PH of the water is required. Forgot to measure ph AFTER I put in the cal mag and 1-1-1 root grow last time...oops. I am growing in Ocean Forest so debating whether to add Grow Big this time...the chart says yes. I think maybe the yellow on the plants and the light colored leaf with dark veins is telling me yes. 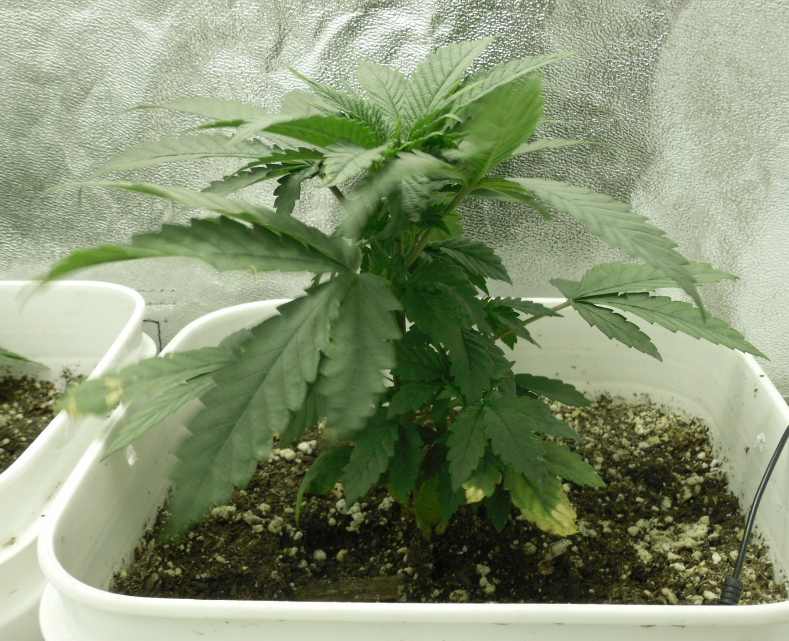 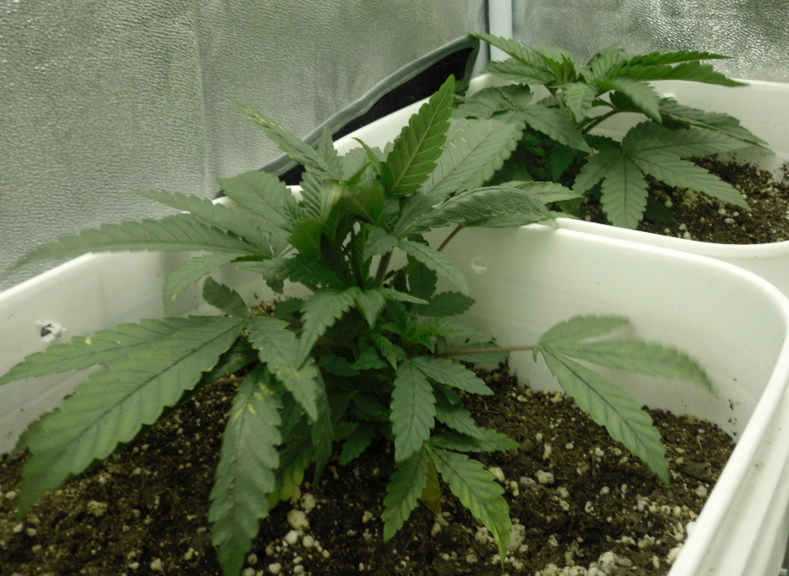 6 weeks from seed? Kids are taking their time growing up, it seems! I thought maybe the bottom leaf yellowing was due to spilling water onto it....but can't tell and can't see too much else in the pics. They look healthy, though!

Thanks Roddy. Yes, they took a very very long time as seedlings. The yellow was just on a couple of leaves originally, and now is on a couple more. Might be water spilling. I will watch it when I water next time. First time growing and Indica strain, and I used a weak cfl for seeding until my led's came in and they stretched so I repotted when I put them under the led's. No more stretch under the led's but wonder if that was why they took so long or if it is the strain. They seem to be moving along now.
More yellow showed up under 24/0. Wonder if forcing them to grow faster with a nutrient deficiency was impacting them so put them back to 18/6. I figured it would just take them longer but didn't want to take any more chances.
Is it possible they need more nutrients when doing 24/0 because it forces them to grow quicker?

I have a couple of AIs going now. I had a few seeds lying around and decided to "experiment" with them for my first organic grow. Even though they were old, all 3 popped and 2 ended up being girls. They are about 1/2 way through flowering now. Mine grew quite normally, so I do not think that it is the strain that caused the slower growth.

Also, the yellowing most likely has nothing at all to do with the 24/7 lighting schedule. I would put them back on it and try to find out the real reason why they are yellowing. I think that they are probably getting hungry. What is the "chart" you are talking about?

I think that you are really going to like the 8 Miles High.

Thank you Hemp Goddess. The chart is the feeding chart from Fox Farms. Since I used their soil (Ocean Forest) I figured I would follow their chart for feeding, although originally when I planed them in Ocean Forest I waited a week and then used a 1-1-1 organic root feed and some cal mag. Next watering I was going to feed the Fox Farms Grow Big but at half strength. They are taking a long time to dry out between waterings though and don't want to over water just to feed.

Do you have holes in the bottom of your pots for drainage?

I think that you should be giving them some food by now, especially if the nute schedule recommends it. What exactly is the nute recommendations for 6 week old plants?

I just love that quote by Eleanor Roosevelt in your sig.

Holes in the bottom and about 3/4 inch from the bottom on the sides in the pots for drainage. I just gave them 1 teaspoon per gallon of Grow Big. Should be giving them 2 to 3 teaspoons per gallon every other week at this time. I want to start slower but with an eye toward a possible deficiency. They were seedlings for a very long time which was most of their slow growth. They are picking up in growth now. Next watering I will give them 2 teaspoons per gallon.

Thanks about the quote. Your quote is one of my favorites.
R

Also, the yellowing most likely has nothing at all to do with the 24/7 lighting schedule. I would put them back on it and try to find out the real reason why they are yellowing. I think that they are probably getting hungry. What is the "chart" you are talking about?

I think that you should be giving them some food by now,

Thanks Hemp Goddess and Roddy ...I will put them back on 24/0. The chart I speak of is the nutrient chart that Fox Farms puts out with their nutrients. I used Fox Farm soil and I use Grow Big in veg stage. A week after I transplanted them I used 1-1-1 Root Booster and Cal Mag, but nothing prior and just today used a light dose (1/3) of Grow Big. Next watering, if all looks good I will use a 2/3 dose of Grow Big.

Here are this week's pics. Starting to pick up on the growth. On full strength nutrients now. 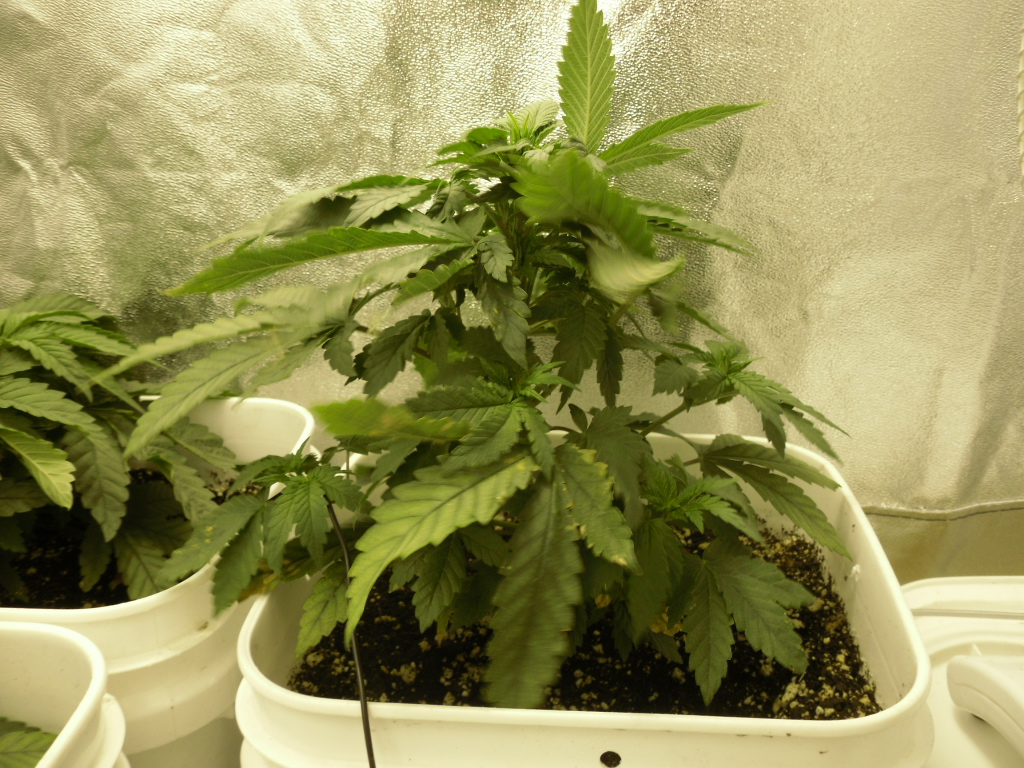 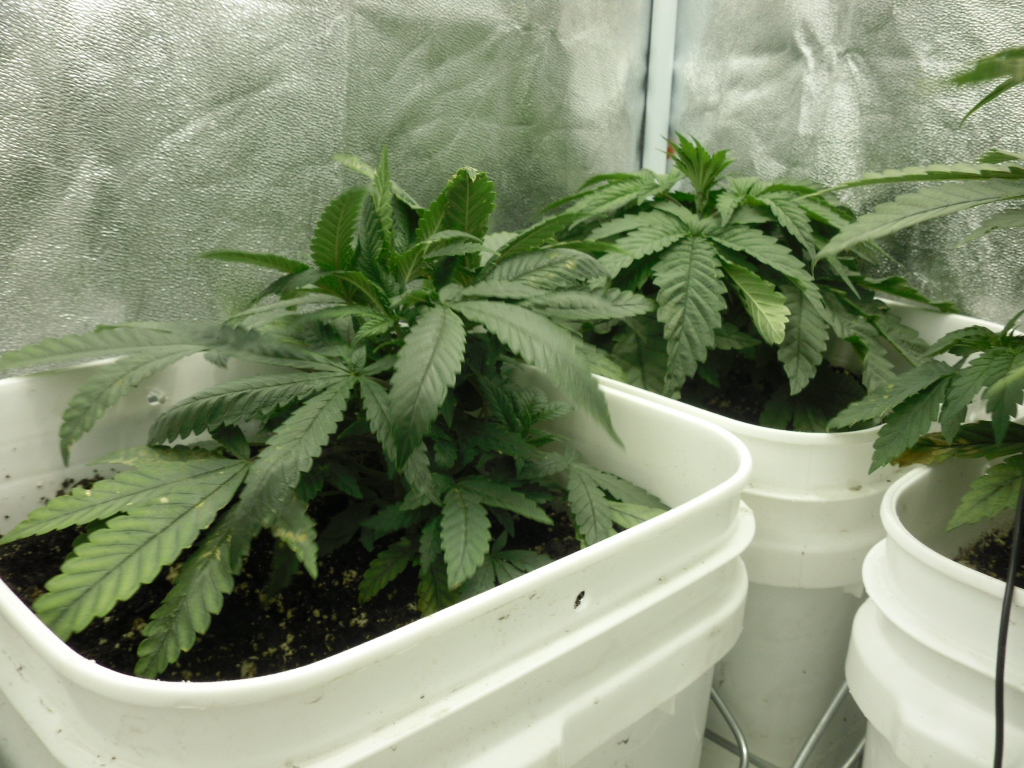 AI was my first real serious grow... its good smoke.. the first time i ended up growing her i ended up with a real good yeild n decent sized nugs...
keep up the good work...
LH 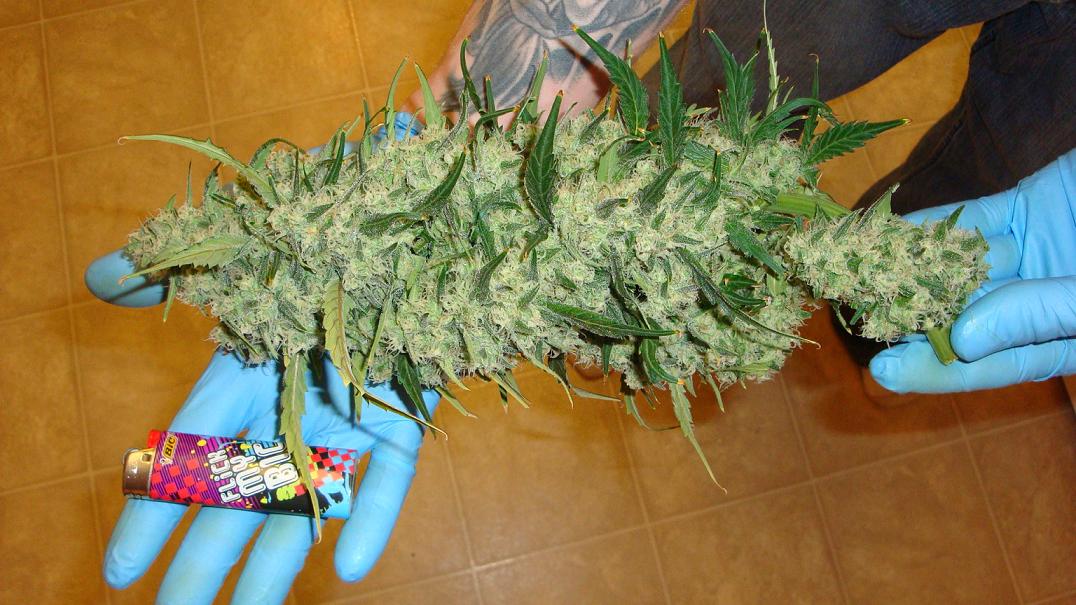 Thanks Lefthand. Looks like your bud is longer than my plants are right now (lol). If I get half that size I will be very pleased. This will be my first indica grow so I am getting antsy.

give er time.. they will grow...
my P.E an blueberry are slower going at the moment than my 2 AI i got running in same tent..
but in due time they will catch up..

good chance i have a dif pheno.. but ive noticed that the AI i got will take nutes pretty good...
generally i usually toss 1/4 strength nutes at em as soon as roots show when cloning..
and in wks time there up to 1/2 an soon after full..

i love indicas.. and would much rather grow an indi than a sativa..
take care play safe..
LH

My last grow was mid 2010 I think and I put away the setup. Ran out of smoke but then was knowing I would be laid off and would likely have to test for any new job so been dry a loooooong time. At my new job (and I was right, I did have to test). So looking forward to this grow and hoping like mad I get at least one lady. Making me a little antsy for the outcome. Like the vulture said, "Patience, ****. I want to kill something."
You must log in or register to reply here.
Share:
Facebook Twitter Reddit Pinterest Tumblr WhatsApp Email Link