Away for the weekend

So I am currently growing my plants next to my window which gets lots of sun light. I currently have the plants in flowering stage so I leave them next to the window for 12 hours then I shut the room and the blinds to create complete darkness for another 12 hours.

The problem is that during the weekends we go to the beach house and I cannot control the amount of light they receive . So in general I have 2 options

2. Leave them next to the window without shutting the blinds this means the plants will receive approx 14 hours of daylight plus ambient light from the street lights.

I don't want to interrupt the flowering process could anyone tell me what's best to do in this situation? Will they survive in complete darkness for 48 hours?

Thank you in advance.

feck the beach , you can go have fun after the harvest

welcome to the green tether
R

Who picks the beach over their plants?

ROSTERMAN said:
Who picks the beach over their plants?
Click to expand... 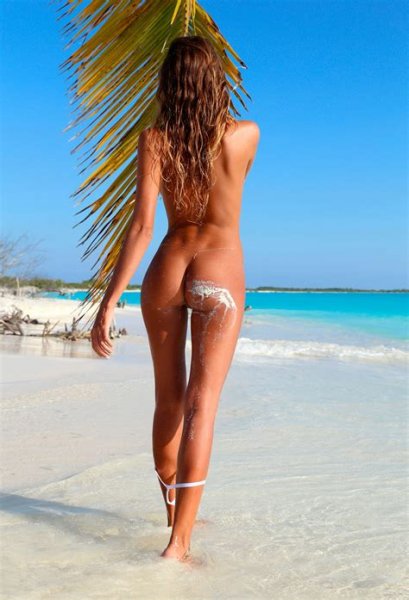 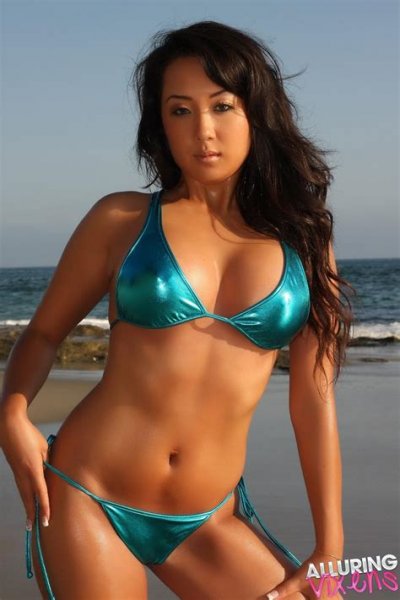 you guys...no but seriously I have to go my girlfriend is making me go and I don't want my plants to suffer.
R

I have left plants in total darkness for 48hrs with no apparent harm.
But nothing is guaranteed.

But 1st are they in vegetative state or into flower mode with buds showing?
If Vegging I would like them ride it out on the windowsill . Again My opinion /

Leave them in the window. Sorry Jim these guys don't know how to be serious.
J

putembk said:
Leave them in the window. Sorry Jim these guys don't know how to be serious.
Click to expand...

) thanks for the advice...like rosterman said at current they are still in vegetative state...I am trying to force them into flowering but still no signs of buds. I will leave them in the window like you said, I think..at worst It will delay the flowering stage.

putembk said:
Leave them in the window. Sorry Jim these guys don't know how to be serious.
Click to expand...


Adverse effects of cannabis
No authors listed
Cite
Abstract
Cannabis, Cannabis sativa L., is used to produce a resin that contains high levels of cannabinoids, particularly delta9-tetrahydrocannabinol (THC), which are psychoactive substances. Although cannabis use is illegal in France and in many other countries, it is widely used for its relaxing or euphoric effects, especially by adolescents and young adults. What are the adverse effects of cannabis on health? During consumption? And in the long term? Does cannabis predispose users to the development of psychotic disorders? To answer these questions, we reviewed the available evidence using the standard Prescrire methodology. The long-term adverse effects of cannabis are difficult to evaluate. Since and associated substances, with or without the user's knowledge. Tobacco and alcohol consumption, and particular lifestyles and behaviours are often associated with cannabis use. Some traits predispose individuals to the use of psychoactive substances in general. The effects of cannabis are dosedependent.The most frequently report-ed adverse effects are mental slowness, impaired reaction times, and sometimes accentuation of anxiety. Serious psychological disorders have been reported with high levels of intoxication. The relationship between poor school performance and early, regular, and frequent cannabis use seems to be a vicious circle, in which each sustains the other. Many studies have focused on the long-term effects of cannabis on memory, but their results have been inconclusive. There do not * About fifteen longitudinal cohort studies that examined the influence of cannabis on depressive thoughts or suicidal ideation have yielded conflicting results and are inconclusive. Several longitudinal cohort studies have shown a statistical association between psychotic illness and self-reported cannabis use. However, the results are difficult to interpret due to methodological problems, particularly the unknown reliability of self-reported data. It has not been possible to establish a causal relationship in either direction, because of these methodological limitations. In Australia, the marked increase in cannabis use has not been accompanied by an increased incidence of schizophrenia. On the basis of the available data, we cannot reach firm conclusions on whether or not cannabis use causes psychosis. It seems prudent to inform apparently vulnerable individuals that cannabis may cause acute psychotic decompensation, especially at high doses. Users can feel dependent on cannabis, but this dependence is usually psychological. Withdrawal symptoms tend to occur within 48 hours following cessation of regular cannabis use, and include increased irritability, anxiety, nervousness, restlessness, sleep difficulties and aggression. Symptoms subside within 2 to 12 weeks. Driving under the influence of cannabis doubles the risk of causing a fatal road accident. Alcohol consumption plays an even greater role. A few studies and a number of isolated reports suggest that cannabis has a role in the occurrence of cardiovascular adverse effects, especially in patients with coronary heart disease. Numerous case-control studies have investigated the role of cannabis in the incidence of some types of cancer. Its role has not been ruled out, but it is not possible to determine whether the risk is distinct from that of the tobacco with which it is often smoked. Studies that have examined the influence of cannabis use on the clinical course of hepatitis C are inconclusive. Alcohol remains the main toxic agent that hepatitis C patients should avoid. In practice, the adverse effects of low-level, recreational cannabis use are generally minor, although they can apparently be serious in vulnerable individuals. The adverse effects of cannabis appear overall to be less serious than those of alcohol, in terms of neuropsychological and somatic effects, accidents and violence.
Similar articles
See all similar articles
Cited by 3 articles


LIGHT DEPRIVATION TECHNIQUE FOR CANNABIS GROW
A must-read for outdoor growers wanting to have more cycles per year! 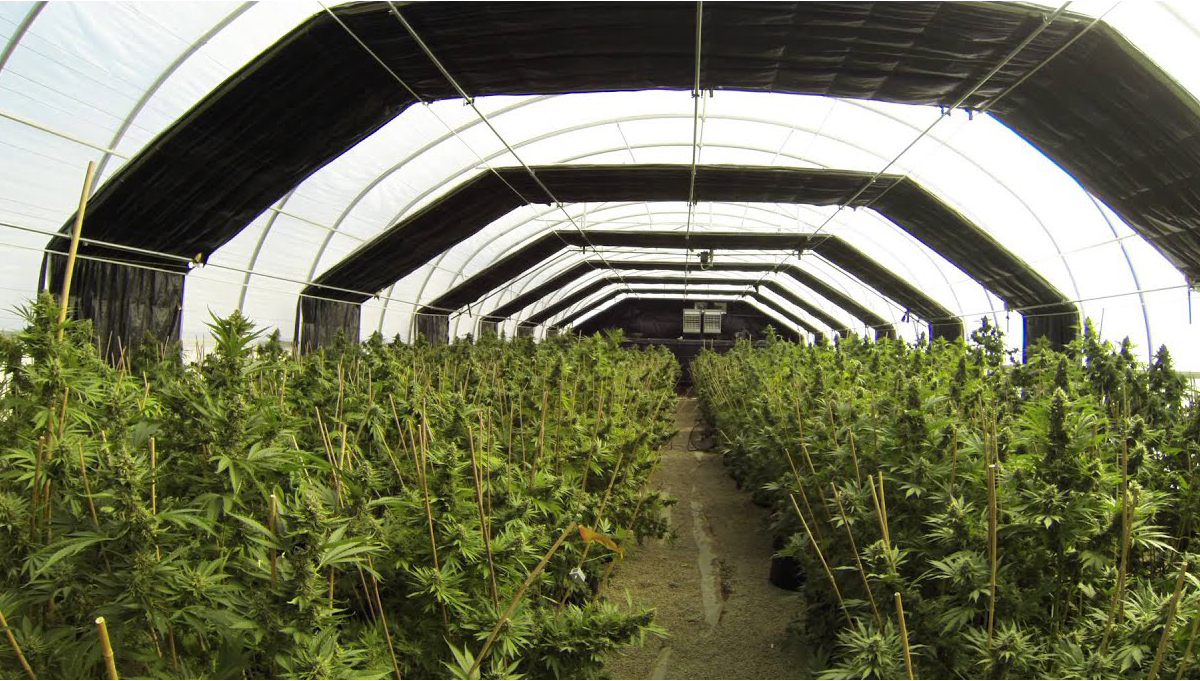 CONTENTS:
As you may know, when growing cannabis outdoors there’s a growing season, this means that you will have to start and end your growing cycle according to the weather.
This season starts at the beginning of the spring equinox and ends in the final weeks of fall before winter starts. Some growers may want to have more harvests per year and this is when the light deprivation technique comes in.
Light deprivation consists of covering your plants with a tarp to control the amount of light/darkness they get, allowing growers to grow more than once a year.
1. WHAT IS LIGHT DEPRIVATION?
Light deprivation is a technique used in agriculture and nowadays, in cannabis crops to control the amount of light and darkness your cannabis gets, simulating seasonal changes. 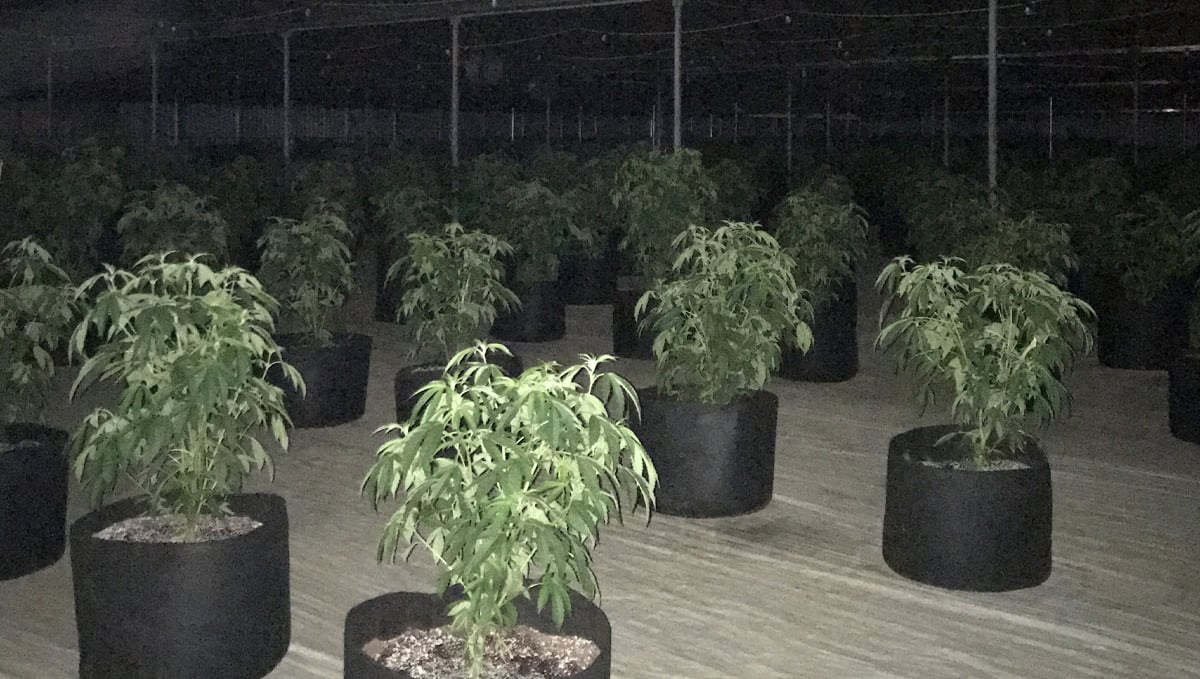 This technique allows you to control the light cycle outdoors.


This allows growers to flower when they need to and reduce the time necessary for plants to fully mature, also making it possible to have multiple harvests per year like you would when growing indoors.
To make this possible, growers often used automated greenhouses that can blackout their plants but there’s no need to buy expensive equipment, you can make your own blackout tentand enjoy the same benefits.
2. HOW TO BLACKOUT CANNABIS PLANTS
Before even talking about how to use light deprivation, you need to have the appropriate structure and materials. 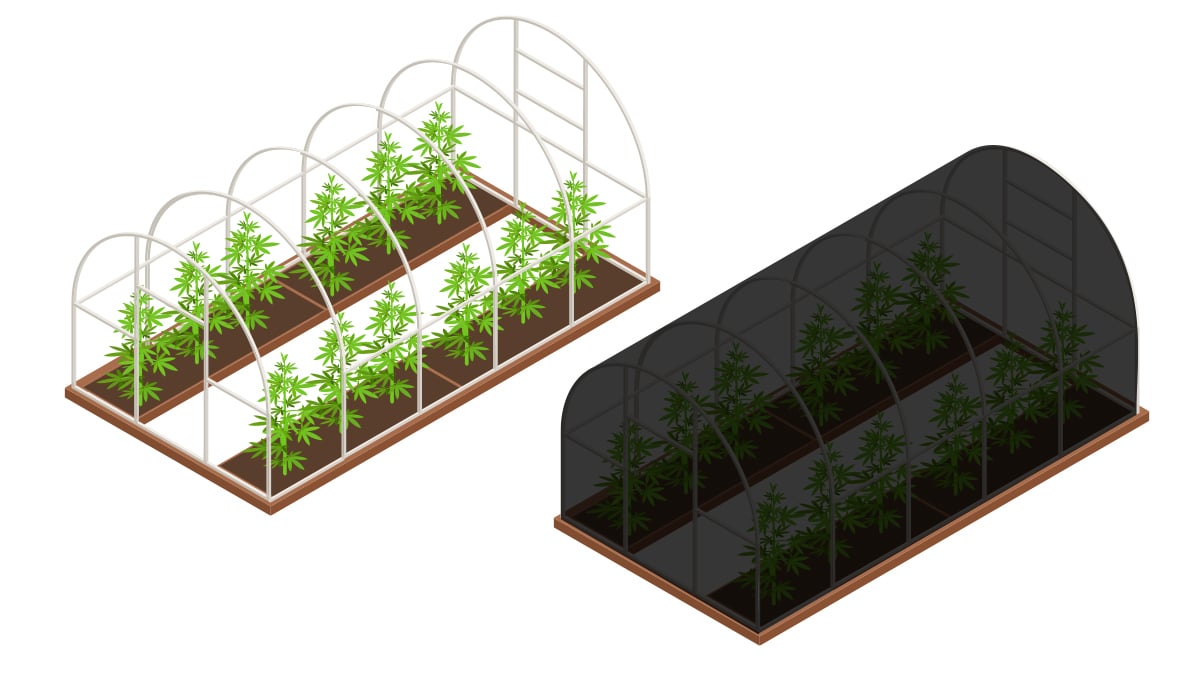 A blackout tent is basically a greenhouse covered with a material to provide complete darkness. 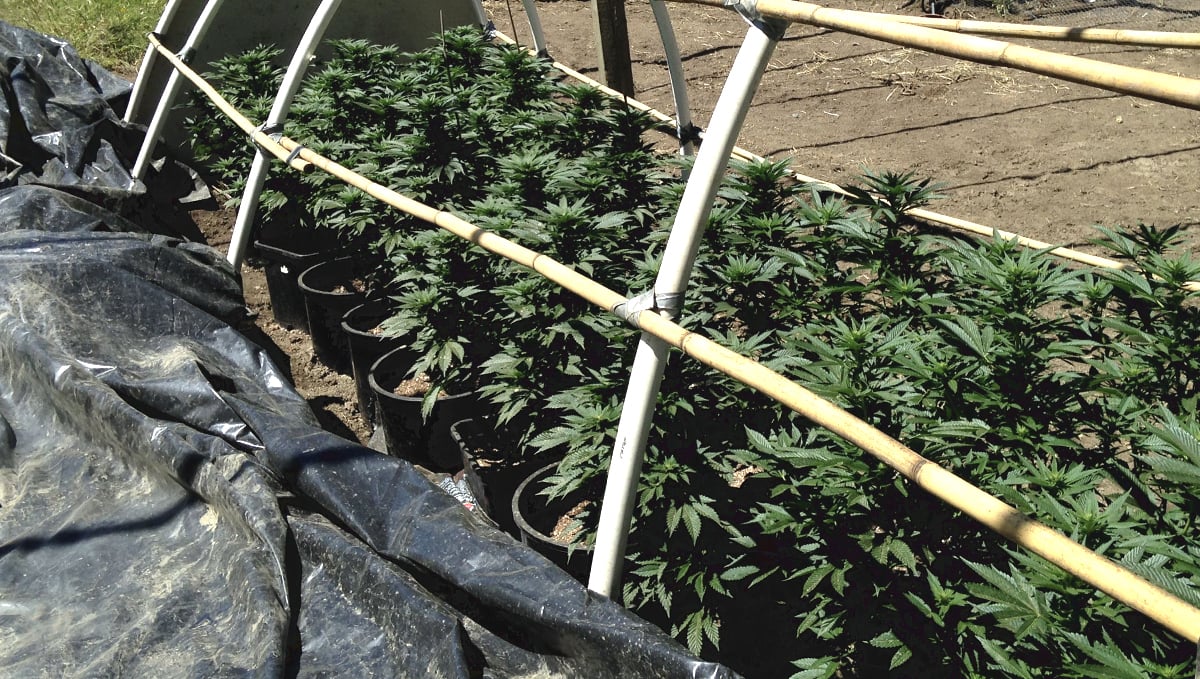 No different than growing outside. Pay no attention to BigSur. He has smoked so much wax his mind hasn't been himself for a long time.

putembk said:
No different than growing outside. Pay no attention to BigSur. He has smoked so much wax his mind hasn't been himself for a long time.
Click to expand...

does this look like a man who has lost his mind? 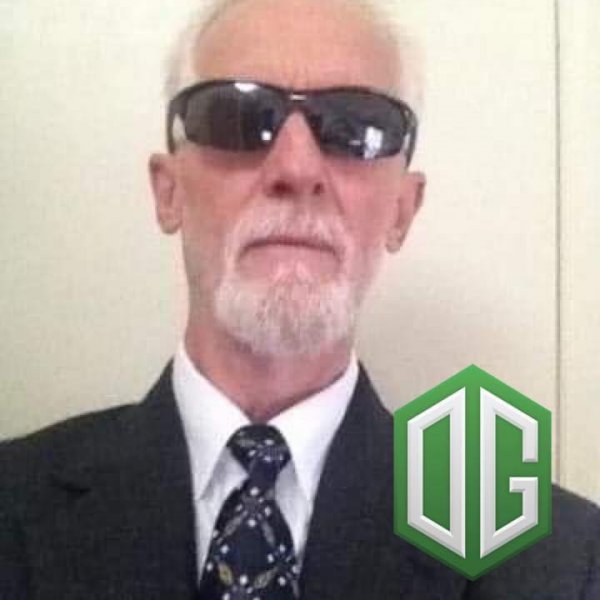 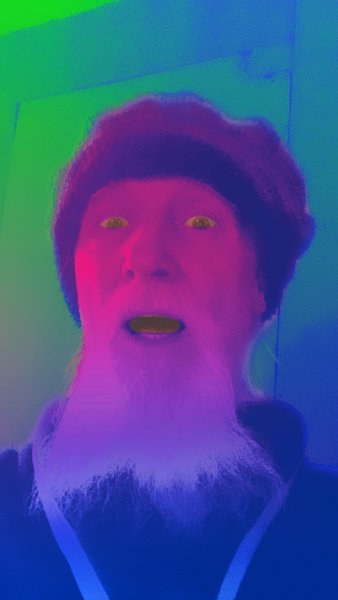 I like the 2nd picture better. Actually that is the only way I have ever seen you. Besides that is a clip on tie. You don't know how to tie a Double Windsor. This is more your speed. 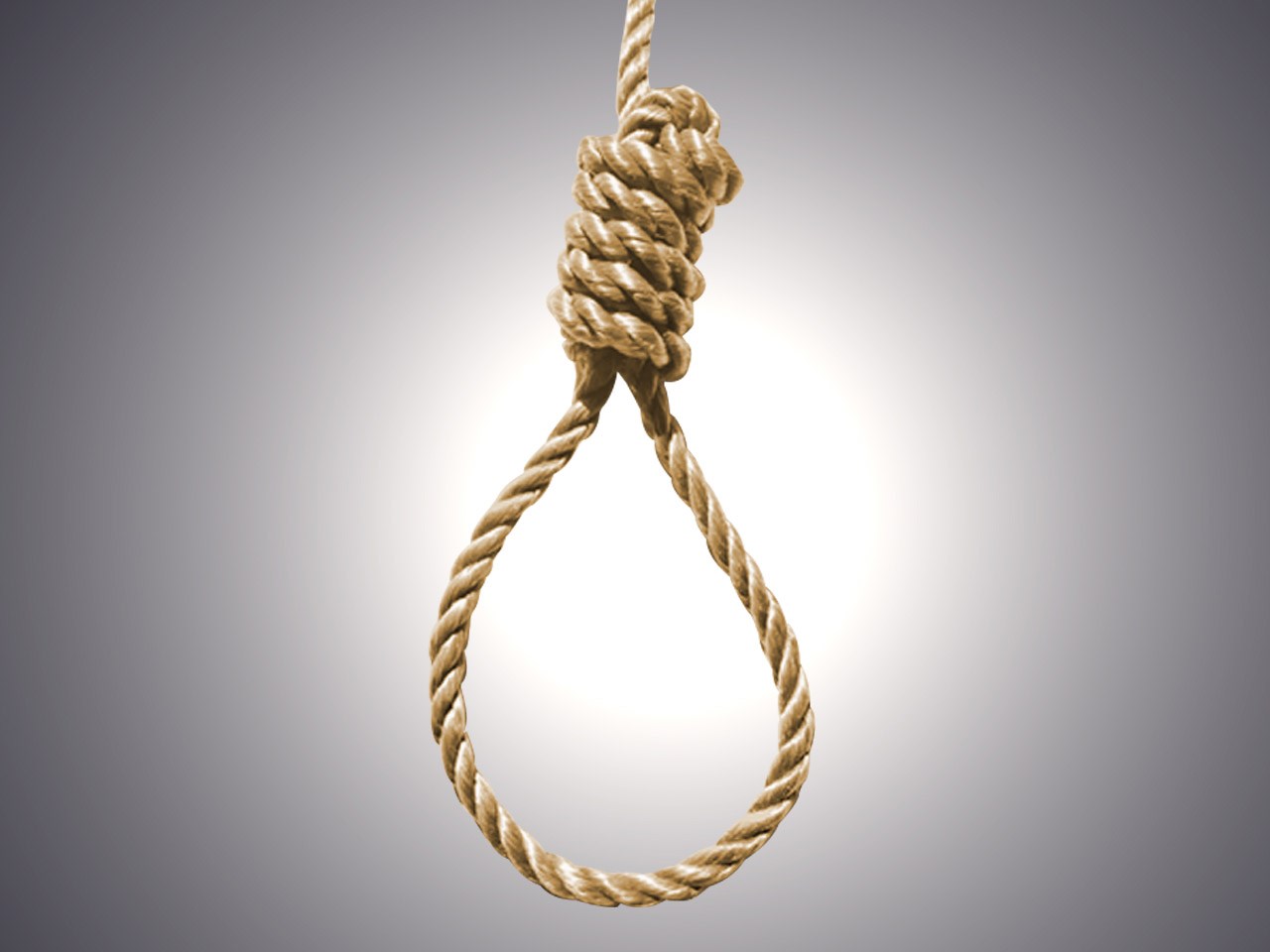 Next time Bro grow Autos. That way it doesnt matter if they are left in the window.

Do you still switch autos to 12/12 or keep then heavy light?

No. Autos Automatically start flowering regardless of your light hours. They do best under 18/6 or 20/4. I personally start them under 24/0 and when i see pistols i go to 20/4 and when she starts budding really nice i switch to 18/6 to finish. But to each his own.
The cool thing is they will flower no matter what. I have found they like to eat. They are little pigs.

S
Will lights off hurt the plant?

My electricity went out in veg stage