Been A Lurker For A While And Now It's Time To Say HELLO!!!

Hello guys and gals all the way from rainy Yorkshire in the UK. I'll start by saying what a great and helpful site this is with some great information. I'm a complete newbie and am currently on my second only grow.

My first grow was a huge fail and although I did end up with some bud I also ended up with seeds because my girls hermied on me due to over pruning them and they were autos. I think I made every mistake in the book and after a load of bud that tasted like grass and had little to no effect I left very disheartened.

I decided to give it another go about a year later and here I am. I currently have a Blue Cheese Auto

in one section of my tent with three seedlings which are White Widow XXL Auto, Zombie Death **** and Critical and the Blue Cheese has been under a cheap 200w twenty pound LED light from Ebay which is probably drawing about 40w in reality but I have to say she is doing great and hasn't had a single problem so far and she is now seven weeks from sprouting and growing some great buds and smelling lovely. Also any day now I have another of the same light arriving to finish her off and I have added two smart CO2 packs.

and a Strawberry Eclair

which I flipped to flower just yesterday and after a slow start in my cupboard under minimal lights and less than optimal conditions they are now doing great and exploding with growth and I have also just added an airbomz kit. They are under a 300w Meizhi Cob light and a 2000w Vander Life LED light. I decided to go all organic this time so I'm using canna terra pro soil and biobizz nutrients and my temps and humidity have been bang on the whole time without needing to do any adjusting.

I'm hoping since these are not autos and are growing under much better conditions than my first lot I shouldn't have any hermie business and I am not over pruning either or taking advice from arrogant people who last time diagnosed a nitrogen deficiency which was actually nitrogen excess so that set my autos on the road to fail very early on.

Well that is me and my girls and I so look forward to them finishing and not having to shell out money making dealers rich and getting bud that chokes the life out of me due to being pumped full of synthetic nutrients and not being dried properly.

Hi DaddiD......Congratulations on gaining your cannabis independence. So glad you decided to drop in on the boards and looking forward to you being a regular here. 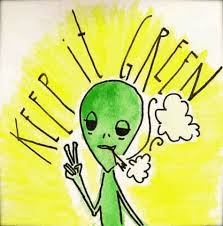 Thank you guys, I'm loving it so far. I just heard the airbomz device do its thing in the tent from downstairs and it gave me a little thrill. :-D
L

The benefits of things like CO2 packs are very questionable. CO2 enhancement really needs to follow certain parameters to actually be effective--higher temps, controlled and regulated to 1200-1500 ppm, coordinated with your exhaust, more light, etc. I think you would be ahead if you saved the money from the CO2 packs and bought more light. Light more than anything is going to affect your yield.

Welcome Daddii! Did you say cupboard? That is some creative use of spaces : ) this sounds like a good time ahead ! Cheers!
You must log in or register to reply here.