Just wondering what the upper limits of plant yield is for large outdoor plants. My largest plant yield was 2.5 lbs. I was told by a California outdoor grower that yields can be above 5 lbs. I’d like to hear if anyone has witnessed any mega crops.

Why wouldn't they. They are growing freaking trees in perfect conditions for marijuana.
I personally wouldn't want to deal with 5 pounds of weed because i dont sale weed. Thats a lot of fking work trimming that much weed.

Exactly bro. When my love of growing becomes to much hard work its not fun anymore. I have a fking job i dont need another one. Ill grow my personal shit and thats all i need. For those that have made it their job,,cool,,whatever floats your boat. I love growing and cloning all kinds of plants. My garden makes me happy. But if that garden was big and a pain in the ass it wouldnt be fun anymore,, nor a hobby anymore. It would be a job,,which i dont want or need.

You just described my life except that is my job!! I'm behind on things .....gotta go to work.

we had some snow leopards that were close to 5 lbs

but trimming is not a difficult task here because we process everything into concentrates , keef , rosin , resin , oleoresin ,RSO , and edibles , we only remove the larger fan leaves and feed those to the chickens

when I first moved to Colorado back in the gold rush days of $4000 a pound , we were doing 30-50 lbs a season outdoors and we used 3 of those spinner hand cranked trimmers and very little scissor work

but I’ve trimmed my shar with fiskars until I went insane...since then it’s only concentrates with an occasion joint or two

so we only grow and trim once a year which is a fun hobby now...I’m a retired bootlegger lol
R

Had loads of fun Thks , Peace All

Few yrs back when I was able to do outside I ran only one plant after culling the rest, it was a bute .The stem was a trunk and was as big around as a beer can (truth) it had 4 main branches until a storm came in and broke half of it off 4 weeks or so into flower, I was still able to harvest 3.5 elbows give or take a zip.
Still have some of the bad boy. LOL

Just google Mendo Dope, you'll see how big of plants you can actually get.

oh hek, I did it for you From the Mountains: Growing Massive Marijuana Plants with Mendo Dope | Cannabis Now

10lbs per plant is their minimum to keep it in the line-up.

RosterTheCog said:
Few yrs back when I was able to do outside I ran only one plant after culling the rest, it was a brute .The stem was a trunk and was as big around as a beer can (truth)
Click to expand...

that brings back an amazing memory for me.
Years ago, living in Albuquerque, NM.
I was young buck renting a guest house on a large hacienda down by the Rio Grande River.

I used to park my second vehicle at the edge of a pasture. One day I was cleaning the interior and tossed the contents of the truck ashtray - contained a few small roaches & seeds.

I parked my truck and noticed a large pot plant sticking up above the weed line. Holy crap – one of the seeds I tossed months earlier took hold. I investigated and noticed how healthy the plant was and that the ground around it was moist. I recall the landlord telling me not to park on that spot because there is a septic tank with a leak problem there. Holy crap – that plant tapped into 24/7 water/fertilizer source.

By the end of Sept I felt like an expectant father. Problem was that the weeds/grasses surrounding and concealing part of the eight foot Monster were turning brown, while the plant was neon green. I swear – I think the pilots in jetliners could have spotted it while on their approach to ABQ airport!!!.

I was traveling for work then. So I made a deal with young guy next door. That he keep an eye on it, park his vehicle back there for the next couple weeks to prevent anyone else from using spot and we'll split the take 50-50..

At mid October the trichs were getting rosy. We then made a midnight mission to harvest. I had to use a handsaw to cut the trunk. Don’t know how many lbs we got – but I know I did not buy herb for two years!!

and it was KILLER weed..

All that from a randomly tossed seed!!
V

Thanks Chad/Westport for that link to Mendo Dope. Impressive plants! Looks like their drip irrigation boosts growth for those stratospheric yields. My natural intermittent Vermont rains are sufficient for good enough growth for me. Kudos to you West Coast growers with your long season!
R

Had loads of fun Thks , Peace All

I agree LOL, I am lucky to get 3-4 bud zips from my indoor , but indoor bud just tastes better and you never have to get wet or cold.

If I can average 3 1/2 zips per plant I am happy. Some strains yield over 4 and some give up less than 3. If I try and get more they grow to tall for the tent which leads to more work and other issues.
J

I haven't been growing that long only on my 3rd grow but I been averaging 8-10 oz of dried bud per plant. Looking for more yield always but happy with my results so far. My plants have only been growing 3 - 4 feet tall in 20 gal pots.

The most I've gotten is 7 zips from one indoors but 4 to 5 zips is average. 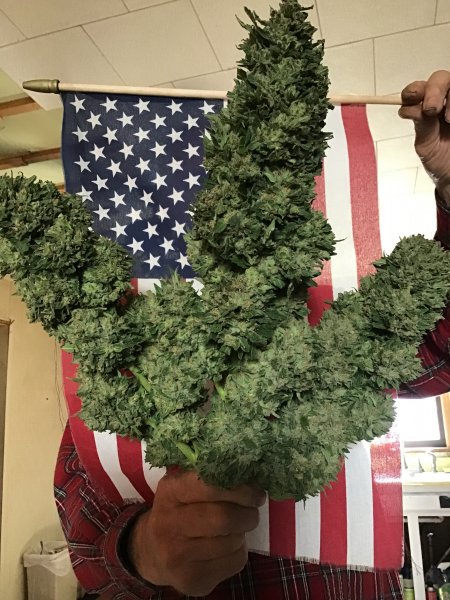 How patriotatic, makes indoor look like a waste of time.