Lets just call now zero hour of day one. It is 3 "00 Seeds" Do-Si-Do cookies, Fems... Hydro with huge double air stones and a recirculating set up in hydroton, 60 gal rese. But I only filled it up to the 10 gallon mark, righted PH and mixed solution based on 7 gal that way it was a little weak. PH still good running 5.9 for now. All under 2 1200 watt and 2 1400 LED's. I plan on ordering seeds through one of our sponsors between now and Christmas. I know this will sound crazy to some people but... I am searching for the unsettling, something that actually causes panic attacks. The Cinderella 99 or something similar or worse. I will get pictures up after lunchtime tomorrow. Like the old Willie Nelson song... "I'll never smoke weed with Bugus Monkey again"

Room is 4 foot 4 X 7 foot 6 with 8 and a half foot ceiling. De bugged and super cleaned, bleached, finished, painted, sealed and vinyl floor down. I know my lighting could use major improvement but I also have seen journals using the Viparspectra's. They will work, maybe not the best.. Room is only meant for personal use as my days of being in the business so-to-speak are way behind me now. I have my medical card which in Illinois allows up to 5 plants. This is only 3. I really don't know or can find out much about the non-VS lights as far as journals. Last run I ended up cutting everything down and ran it over with the push mower with bagger. (That was the last of the scary, unsettling Cinderella 99) The hard core old timers here would have appreciated that buzz. Not most newbies. Similar to the old school Red Point or Columbian Gold of yesteryear. Only thing I remember close was when the original G 13 made it's first appearance. Ended up with about 3/4 of a mower bag full last run. Sprayed, bombed, sprayed, bombed repeat several times. Hopefully it was enough. Located in stick built construction, elevated one cinder/concrete block over a pad only 3 years old. The bugs were absolutely crazy. Been at it since 1984, some years very good, some not and never, ever had the problems like I had last run. It has been a wonderful hobby and made for some very good random Christmas's for my kids who are now grown and moved on. Because (I stole this from an old local grower) "Money Does Grow On Trees... If You Plant The Right Ones" Again my days of buying and selling are way behind me. I have a great wife who is not 420 and never was. She is nice enough to allow me the space I have which is more than enough. Picts of set up.. Next will be picts of monsters from last run. Anyone had horror stories abut mixing and matching nutrient manufacturers? (Considering Technafloral as the Fox Farm is not available at the Local grow store) At least everything needed for a full run wasn't. That thought is crossing my mind. A little this / a little that. Probably another proven No-No. "And don't forget the Cal-Mag" haha - Joke for Rosterman.

The Bad Guys... (Bugs - not the people) - I just felt like the people I had made friends at the last place I was at sort of abandon me. Place went completely silent at my end when I asked for help. I was having a hard time simply googling this stuff because I didn't know what to put in the search engine. I never asked my local grow shop too much because I didn't have my medical card yet. I do now. I did get a couple of responses but it felt kind of weird after all the prior rapport established. Anyhow. I am here, I like it, and everyone seems helpful and supportive. The white crap between the trichs and bugs is DE. Never slowed them down a bit.

Thank You - Looking forward to your knowledge/help if and when the time comes. Hopefully it doesn't

The Passion is a great Forum. Glad your here.

Off to a great start monkey. Feels good eh! Keep on trucking.

I plan on using this here thread for time reference and things related to my grow closet. The former thread New guy from Illinois or something along those lines can be closed or deleted, if that's something that is done. Very long road ahead. Looking forward to completing this mission with you all as co-pilots.
Shot of your favorite Bourbon later tonight around darktime. - Here's to a new Beginning. - Peace.
- Peeking out..

Pulling up a chair.
R

WeedHopper said:
Pulling up a chair.
Click to expand...

Pulls out a chair for you

Note to Self..
PH adjusted slightly down.. Now at 6.1 - Cut watering cycle back from 3 to 2 cycles per 24 hrs. Rese needs filled already - after lunch if I can stay away from here - Fresh water only - no mix.

Mrs. Monkey will be happy with me today because... "You can get a whole bunch of stuff done when you don't spend all day screwing around with your new friends on the weed website". - Missed giving you guys trouble today, real work not completely done yet, see some of you here later tonight. I did actually do that Bourbon shot from above listed last night though. Peace...

Bugus_Monkey said:
Note to Self..
PH adjusted slightly down.. Now at 6.1 - Cut watering cycle back from 3 to 2 cycles per 24 hrs. Rese needs filled already - after lunch if I can stay away from here - Fresh water only - no mix.
Click to expand...

you are on the right track

my runoff was still in the high 6’s so don’t be afraid to lower the Ph........your plants will tell you what’s up by being healthy or locking a nutrient out which will affect the plant and a keen eye will see what the plant is saying

Note to self = NTS
PH down again back to 6 - Hopefully fill rese in the AM with straight H2O.
Pict with no filter.
Pict with my LED lens cover over phone.
Pict of LED Les cover.
You guys who don't have one of these or something similar need to eventually get one same as getting a decent Loupe/Magnifier, Electronic PH Tester along with a PPM meter. - - I am still working on my PAR meter or App.. - - The whole PAR thing is new to me too and I have been studying up on it.
13 Hr work day - Real Job.

NTS - Raised all and turned on second set of non adjustable (Non Vipraspectra) lights. - Everything running full blast on veg only - Bloom off for quite awhile still. At this point - The future's so bright - I gotta wear shades. ha ha ha
As Andrew Dice Clay would say - - "Lets Not Start S*&ck*&g Each Others D&*ks Just Yet" - (JOKING!) - Mrs. Monkey doesn't have one of those - I wouldn't if she did - Hmmm.. hahaha Giving you guys trouble - (More Cal-Mag) - Miss screwing off here all day - One whole heck of a long way to go. Regular work, putting in about a straight 20 to 24 hour day... Sleep a couple hours when I finally get home Saturday.

NTS-Filled Res. Nothing added but PH down to 5.8. Essentials - Besides a loupe. I have been online with the stick and I understood before that what it reads. I am not sure which column of numbers vertically to use on the stick? I will be off regular work for several days straight and get to hang out here this week coming up.

Roots peeking through the bottom. That didn't take too long. 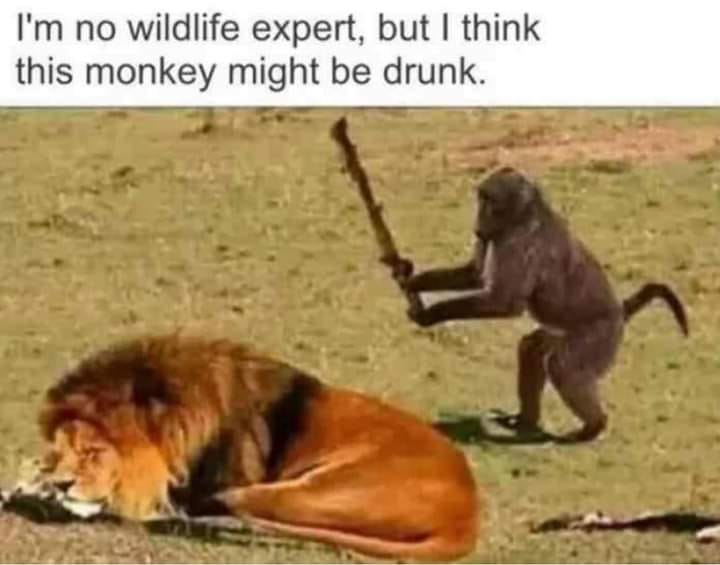 It's weird because the picture shows him doing that to a male Lion but the video he actually hits a female and she catches him, tears him apart and eats him. Photo shopped before I stole it.
R

Post that video LOL I never saw that one
I found it
You must log in or register to reply here.

C
Rapid die off at day 35 of flower... desperate for help