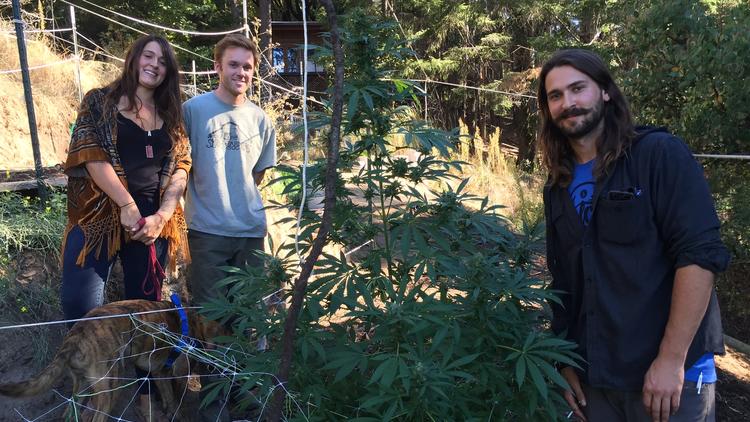 
Its not every day you get invited to a Mendocino County pot farm. For so long, the folks who grow medical marijuana have lived in the legal shadows, caught in a squeeze between local officials who say they can grow and sell the stuff, and the feds, who say they are drug dealers if they do.

But the four 20-somethings who run PolyKulture Farms want out of the cannabis closet. Like any organic farmers, they are proud of what they grow, proud of their methods and proud of their respect for the land.


Its been in everyones best interest to be quiet about what we do, said Micah Flause, 27, who owns the farm with his 25-year-old brother Zach; his girlfriend, Johanna Mortz, 28; and her 26-year-old brother Andrew. But now we feel that we should introduce California to where this high-quality medicine is actually coming from. It comes from small farmers, not these big warehouses in the city.

Micah, Zach and Johanna had been growing marijuana near Chico, where Micah was studying soil science. They moved to Mendocino because the county is friendly to small growers, and is known for the highest quality cannabis. Andrew, a former commercial fisherman, joined them six months ago.

They have not come to this terraced hillside to get rich. They speak reverently about the medicine they produce, and about the patients whom they are helping. Right now, per county law, they are allowed to grow only 25 plants (or trees, in the local parlance). A plants yield can vary widely. Last year, Micah told me, one of his plants produced nine pounds of manicured flowers, though most of his plants yielded four to six pounds. Lately, the per-pound price has ranged from $1,200 to $1,500.

Even if the first wave of corporate takeover is devastating, the small farmer will be back, and the finest cannabis will always come from small farms. I do have faith.- Micah Flause, 27, co-owner of PolyKulture Farms in Mendocino County

A few years ago, Mendocino County allowed growers to have 99 plants per lot, but the federal government threatened to sue the county, and the program was scaled back. However, with the prospect of legalized recreational marijuana on the horizon, Mendocino supervisors are reconsidering the 25-plant limit.

The PolyKulture farmers worry constantly about financial viability. A mortgage for their five-acre parcel was out of the question, so their families spotted them the $405,000 purchase price. They moved in last May, which means they got a late start on this seasons crop. They planted clones, or cuttings, instead of seeds, and had to yank out their entire grow after it became infested with mites.

They work 12 hours a day, six days a week. On Sunday, they attend Hash Church, an online broadcast about the business.

If they can grow the kind of high-quality, organic cannabis they envision  pesticide-free, outdoors, in soil (not containers), with homebrewed compost tea (not fertilizer)  they will be able to make a living.

Marijuana has allowed this county to exist, said Julia Carrera, who picked me up in Ukiah and drove me to PolyKulture Farms. It would be like Appalachia without marijuana. Economically, it would be dead.

Carrera is founder of the Small Farmers Assn., a group of about 650 marijuana growers in Northern California who are committed to sustainable, bio-dynamic farming. The SFA certifies its growers, educates them about the ever-changing legal landscape, and works to ensure that the voice of the small farmer is heard in Sacramento, where lawmakers have just begun to create a regulatory framework for the medical marijuana industry, nearly two decades after California voters legalized it.

Carrera, 52, believes that many thousands of farmers are growing pot in North Coast counties, some legally licensed, many more not, but that most families use the proceeds as patch income to help them buy clothes for children and put food on the table.

It seems increasingly likely that recreational marijuana will be legalized in California. Small growers are worried, as well they should be, that moneyed interests are poised to wrest the business away from them.

There are going to be battles, said Hilary Bricken, a Seattle-based attorney who specializes in marijuana law and has been advising California farmers and dispensaries about the new state laws, set to take effect in 2016. People are not used to the typical political machine that accompanies rule making. I have had numerous conversations with people, and when I ask them if they know a good lobbyist that can gain access in Sacramento, they go, Why?

Plenty of reasons. Already, the state has created a preposterously complex system of 17 licenses related to the pot industry, as well as a scheme that would make it virtually impossible for growers like PolyKulture to retain control over the processing and distribution of the cannabis they have sweated to grow into those perfect, resiny buds with names like Lemon Chunk, Clementine and Blue Lime Pie.

Bricken said legislators are taking a page from the tied-house rules that govern the alcohol industry, where producers sell to distributors who sell to wholesalers and retailers.

Theres got to be a middle man somewhere in the chain, Bricken said, and a lot of time that is done to create taxable events at the state level for revenue capture.

The New Marijuana Age has led, inevitably, to some unintended consequences.

Mendocino growers must surround their property with 6-foot-tall fences, and plants may not be visible from any roadway. Yet as Carrera and I drove away from PolyKulture Farms, hundreds of linear feet of undulating wood fences on dozens of properties virtually screamed, Were growing pot here!

I rolled down my window and the skunky smell of ripe marijuana blasted me in the face, a pervasive odor that, to some sensitive noses, is as noxious as pesticide.

To others, it's the smell of success.

Even if the first wave of corporate takeover is devastating, Micah told me, the small farmer will be back, and the finest cannabis will always come from small farms. I do have faith.

That's good, because I think hes going to need it.


http://www.latimes.com/local/abcarian/la-me-ra-abcarian-pot-harvest-20151103-column.html
You must log in or register to reply here.