SALT LAKE CITY  A deadly booby trap rigged along a popular Utah trail could have killed someone if they had tripped a ground wire set up to send a 20-pound, spiked boulder swinging into an unsuspecting hiker, authorities said Monday.

Another trap was designed to trip a passer-by into a bed of sharpened wooden stakes, authorities said.

Two men arrested over the weekend on suspicion of misdemeanor reckless endangerment told authorities the traps were intended for wildlife, but investigators didn't believe the story.

The suspects built a dead-wood shelter as a possible lure for hikers who could step inside only through the two booby-trapped entrances, Utah County sheriff's Sgt. Spencer Cannon said.

"This is a shelter put together by people, visited by people  anything that would be impacted by their device would have to be humans," Cannon said. "It took some time to build these traps. They took rope, heavy-duty fishing line, and they intended what the traps were going to do."

The structure was easy to see, Cannon said, but the booby traps could have been overlooked by everyone except a military-trained officer like James Schoeffler of the U.S. Forest Service, who was on a routine patrol along Big Springs Trail last week when he noticed the trip wires.

"A lot of people go up there after dark, as well," Cannon said. "We're very, very fortunate that it was Officer Schoeffler who found it."

The U.S. Forest Service has not made Schoeffler available for an interview. Authorities said he disabled the traps after taking photos and video of the site.

The area is located in Provo Canyon, a popular hiking spot a few miles from downtown Provo. Cannon said the traps were just a half-mile from a busy trailhead.

"Who goes up this trail thinking, I'm going to have to look out for booby traps?" Cannon said. "A kid could say, `Oh cool, a shelter,' and run right across the trip line."

Days after Schoeffler made the discovery, a tipster alerted authorities about comments on Facebook that mentioned the traps and the shelter. Detectives then tracked down the suspects, Cannon said.

Benjamin Steven Rutkowski, 19, of Orem and Kai Matthew Christensen, 21, of Provo were booked in the Utah County Jail on Saturday and released on bail.

Prosecutors believed the misdemeanor reckless endangerment allegations were the strongest claims they could pursue without anyone being injured. Charges have not yet been filed.

Rutkowski's father, Steven, declined comment. No phone number was listed for Christensen, and it wasn't immediately clear if either suspect had an attorney.

They got these yoyo's, but possible copycat action could follow, those who use the trails...please be careful!

They was hunting themselves a bigfoot.
T

There are some real sickos on this planet for sure.
T4
R

Charges shoulda been attempted assault with a deadly weapon, then maybe fools like these would actually THINK. Truly, it's nothing short of attempted murder...imho

its an act of terrorism.....and These are serious fools and should be made examples of

take care and be safe

Roddy said:
Charges shoulda been attempted assault with a deadly weapon, then maybe fools like these would actually THINK. Truly, it's nothing short of attempted murder...imho
Click to expand...

yyyyyyyyep........
every once in awhile, we've had members talk about booby trapping their grows here.
I'm always in the woods accompanied by kids, and I've always tried to convey a simple message to those folks.. "Any harm that came to one of my grandkids from stumbling into your stupid trap, would look like a hangnail, in comparison to the pain 'you' will endure when (not IF) I get my hands on you"... had some pretty 'creative' ideas about barbed wire and urine...:hubba:

you sound like you know how to get miedeval hick! har har har...hey, if the sign says private, no trespassing, i'm certain that still means keep out...i prefer to look a thief straight in the eye, but some fish treble hooks wrapped on you, on thief tube, is a pretty good reminder of what you did too! a little pain and discomfort goes a long ways, and i hear it helps you read better too!

pig stickers on a public trail is a whole 'nother breed of idiot thats still playing world of warcraft in thier mind. what do you do with a kid like that? :hubba: 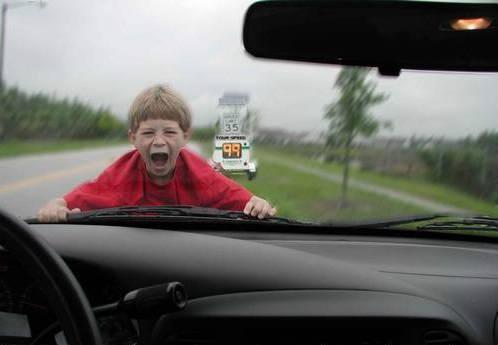 I trap my trails but for food and warmth never to be catchin folk I have my skinnin tool attached to me belt that I use face to face and up front ifin I need to and I always give the other fella first draw been me ways since I was young. Dont see many folk my trails anyways and when I do they dont sees me just keeps hikin walkin joggin or bikin by.