Hey guys I am having a problem that I have not had before. I keep losing seedlings. I have had all of my MKUltra seedlings die after germenating. I planted them in my normal coco/pearlite mixture and only watered with fresh water that has a PH6.0-6.5 and no nutes. The first 3 showed good root growth after germing them in the paper towel method. I planted them in my fresh coco mixture in the regular finishing pots and within a couple days I had sprouts coming up nicely and even showing the first set of real leaves. Then they suddenly started yellowing and wilted and died.

I initially thought heat was the issue and tried again with the last 3 beans. This time I put them in plastic cups with holes in the bottom, and I brought them home and put under a "home aeroponics" light which is good for veggy growth. They came up great and were doing fine then yesterday they started yellowing and then within 24hrs wilted and died just like the first 3. I made sure that the coco was moist but not soaked, the lights aren't too bright and only a little warm beneath them.

I noticed there were quite a few gnats that showed up, from where I don't know unless they were already in the coco. I also noticed that the roots when I pulled them out, were looking very good while the stem of the seedlings seemed to colapse above the medium and the leaves had yellowed from the inside going out. heres some pics of 2 of the seedlings. I have 1 left that is still hanging on but I don't know if it will survive.

I need some opinions as I am stumped 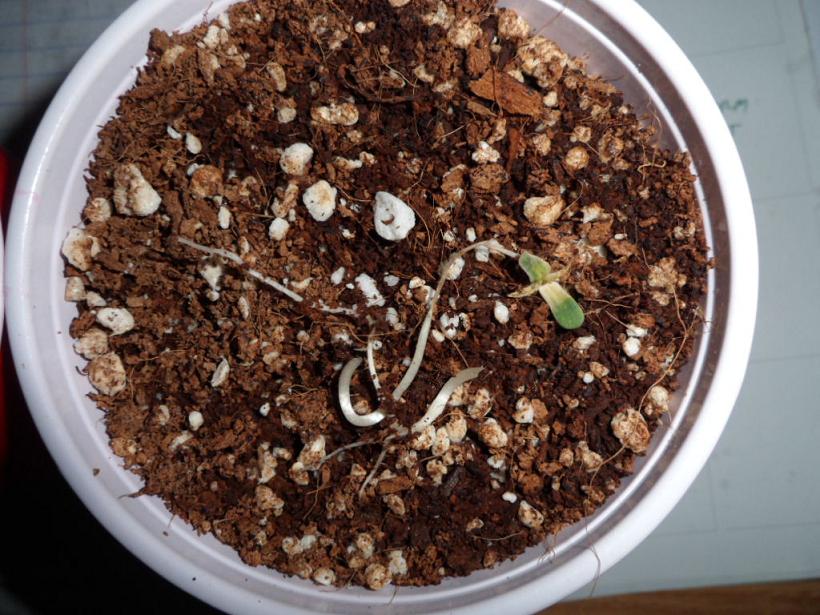 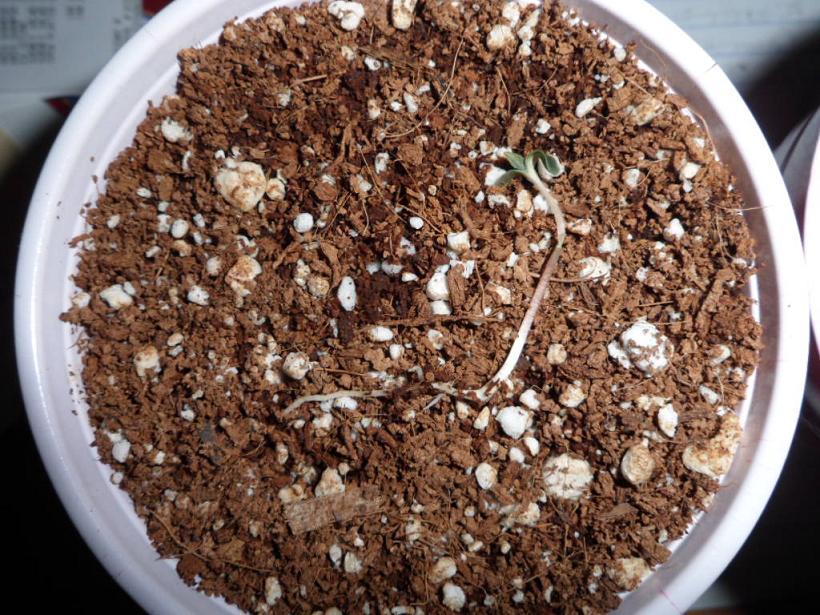 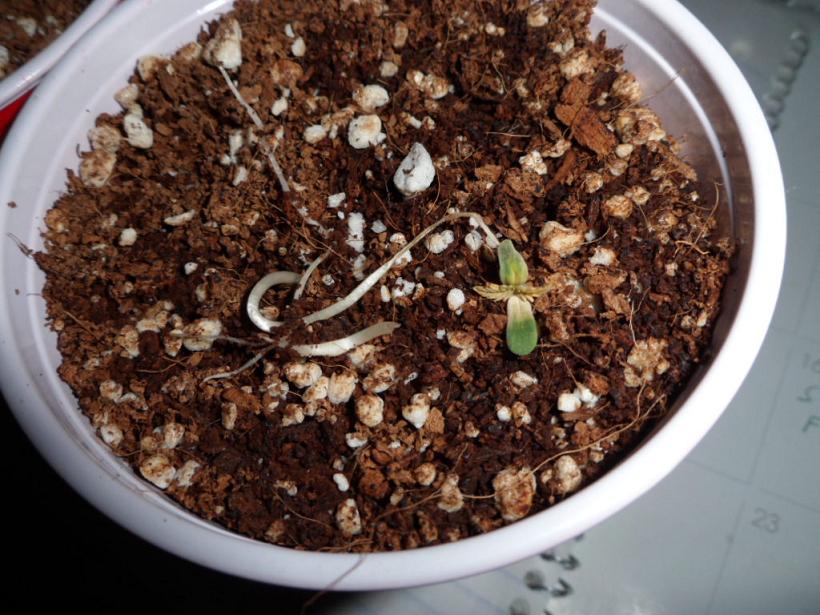 Looks like stem rot, is where the stem collapased right where it emerged from the soil/coco?

Ive seen where if the medium held too much water the stem died right above the medium.

If so just add a bunch of pearlite and leave it loose around the stem.
D

i have had a few of these happen to me recently after never losing a plant that made it above ground, even a MK ultra freebie i had did it, coincidence?
i think so, it also happened with 2-3 other seeds from different banks, i chaulked it up to the conditions in the room, maybe too humid and soil wouldnt dry fast enough. jmo

How old are the seeds? This is exactly what happens to me with old, inviable seed.

It is called "damping off" and can be caused by different things. One of those things that can cause damping off is a fungus infection, which could be in your medium. I would start over with sterile everything.

Here is a bit of info on damping off from Wiki: hXXp://en.wikipedia.org/wiki/Damping_off

THG, Are you secretly and Ancient Alien in disguise? Comming back to progress man kind with your superior knowledge and insight!?!?!? OMG!!! THAT SHOW ON THE HISTORY CHANNEL IS TRUE!!!!

When I've seen damping off its always been at the soil line. His pics look like they died out a few inches above the soil.

Hey Hushpuppy - were they standing up before dying, or died lying down as they are pictured?

Staring at those pics I gotta say that THG is right. I wasn't paying attention to the brown/blackness on the stems. When I try old seed it grows to 1"-3" then just stops - frozen in time. No damping off browness, no falling over, etc.

Yeah I had pulled those seedlings out of the medium before I took the pics so that I could see the roots because I had a lot of gnats suddenly appear and was wondering if I had fungus gnats eating the roots. These seedlings were less than 2" tall. They came up and were standing well, then yellowed from the inside of the leaves and fell over as the stems withered before the tops.

Thank you guys, I will check the info Thg posted and see if that is the case. My medium was freshly made coco/pearlite so I am suprised that I would have a pathogen in it but I wouldn't rule out anything at this point.

These seeds were purchased from the sijngle seed center and were not old to my knowledge. When I germed them, they popped within 2 days

I mixed up my coco mixture and had it sitting in a bucket with a lid on it for several weeks. Is it possible for it to get/develop pathogens in that kind of scenario?

I am going to try some seeds that came from inadvertant herm pollination and see if these fail the same way as well. If it is a pathogen in my coco then I am thinking Pythium and will have to see about innoculating my coco. The interesting thing is that this has happened in 2 different locations, under different conditions. The only constant is in the medium (and the seeds) as I used the same coco/pearlite mixture that I have had in a bucket for several weeks. All else was different.

The first failures I attributed to heat and just reused the coco from the first run. We will see in a week or two and I will let everyone know the results

EsC420PoT said:
THG, Are you secretly and Ancient Alien in disguise? Comming back to progress man kind with your superior knowledge and insight!?!?!? OMG!!! THAT SHOW ON THE HISTORY CHANNEL IS TRUE!!!!
Click to expand...

LOL--Thanks, it is nice to start the day out with a laugh. When you've done something for over 30 years, you just pick up a lot of tidbits of knowledge along the way.

Hushpuppy--I don't think this is the kind of thing that pythium or innoculation will take care of. If the coco was the only common denominator, I would be for getting new coco or picking up some kind of seed starting soil and try that instead. Seedlings that die from heat stress do not get that brown at the base of the stem.

Hey Goddess; (or anyone with this experience) I had my coco mixed up with some water and pearlite in a bucket for about 2 months, but with a lid on tight. I had made it up for getting ready for setting my last clones and had extra. I ended up adding more to it and then set up some pots with it for my next set of plants which died (I thought from heat but am wondering now as 3 sets of seedlings have died in it).

Do you think it's possible that it has some kind of pathogen from being in the bucket with just enough water to keep it damp, even with a lid on it tight?
R

Did it have a sour smell?
R

I don't think that damping off is caused by mold per se, even though fungus is a cause. Yes, I do believe that pathogens can get into soil mixtures. It is not like it was in a sterile environment from start to finish. Wet stuff left for months even with a lid can grow some nasties.

Why not just pick up a small bag of some seed starting mix and try some more? Your seedlings do not look like they got heat stressed. The rotting of the stem at soil level is pretty much a confirmation of damping off.

The cocodoesn't have any kind of sour smell, or much of any smell. I am trying some seeds that are herm seeds and if they don't die from the same cause then I will kill them off anyway. I have some new beans coming in a week so I think I will make up new mix for them anyway as Goddess says. but I figure I can use the herm beans for testers. I have 3 that I just popped and pu in today. I have 2 in the same coco as the others were in and 1 is in a starter cube. I wish I had several of these seed to use for this as better control group, but it should tell me something.
You must log in or register to reply here.
Share:
Facebook Twitter Reddit Pinterest Tumblr WhatsApp Email Link