do we have any mt bikers here?

i've been off the bike for 6 wks now due to double foot surgery and i'm going eff'ing bonkers riding the recliner. so enough about that. what i want to know are some details about your passion?

i've been riding since mid 90's and currently on a 2013 canfield nimble 9. i ride about 75-100 miles a week when healthy. i've been waiting to get a canfield riot for 2 plus years and then at release covid happened. i thought JAAM or kaotic rode but i don't think they come around anymore
Last edited: Sep 1, 2020

Doc i haven't ridden any bikes but a Harley in yrs. Probably need to ride a bike though.

OK I will share one childhood memory with a bike
I was about 10 and I was riding my Mothers' old balloner (tires ) and was going down asphalt roadway as fast as my lil feet would go. My friends were being all cool and doing wheelies on their cool bikes and I was on the old womans bike feeling left out, so......... What did I do but tried to pull a wheelie and I did bike lifted and I was up only to have the darn front wheel pop off as I was 4 feet in the air in front. I knew I was going have to come back down and I did with a bang, hit a bump down went the front forks and they burried themselves were they landed, I went from 20mph to zero and my boys slammed into the area undrer the handlebars, Fookin OUCH , I was swollen and blk and blue for months. Never rode a female bike again.

Hi everyone! Sorry for my absence, we've been working on our off grid system. Our generator (brand new, of course) had a faulty part, so we've been jammin', hoping to beat the faulty part, lol. 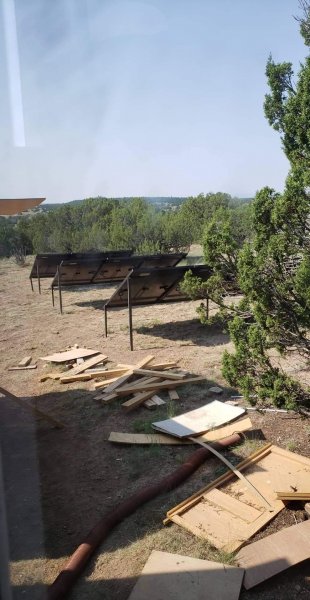 Missing you all though!

Are you a Homesteader?

Well, I guess officially that's what we are becoming, lol

OK another Riding bike slid out on coral roadway way back when Key West had coral roadways
Went down hard right on my face, I was picking coral and scabs for months from the good side of my face
You think my dog is ugly LOL

Cannagrammy said:
Ouch!!! I think i wouldn't get back on, ever!
Click to expand...

That one hurt, Do you have a battery bank with inverters also
Always wanted to give the power comps the shaft and go off grid Myself

oh yes! Let me get you a picture. But! Remember, this is the first set of 2 deliveries. We have double everything yet to install. Brb!

Doc Im sorry I took your thread on a tangent
OK Back on Track
Nope never rode Mt bikes, I would be the guy doing this

But this might cure your itch for a bit

Cannagrammy said:
oh yes! Let me get you a picture. But! Remember, this is the first set of 2 deliveries. We have double everything yet to install. Brb!
Click to expand...

Cool Does the solar aray follow the sun or fixed position?

Doing it up right
Nice Job

I kick myself in the azs , 25yrs ago I was dismantling repeater huts for the phone company and they had generator with all power back ups in place with very special wet cell batteries that never went bad
I was offered the whole setup for free , but at the time I did not have time to play with it.
I wish I had . was worth $1000's of dollars gone .

These are stationary by our next set might move (let's see how much money we have then, lol)

My son mountain bikes and is going to start coming to our land to do it, we have 40 acres, lots of space to get hurt, or I mean, have fun! Lol

Doc wont care. He is probably loving it. Got ppl talking.