Growing your own Mycorrhizae and recycled mix

I first posted this about this time last year, but it got lost in the crash. Here it is again.

Maybe, this little project isn't finished yet, but I'll outline what I've done.

Well over a year ago, I read a short Rodale article where leeks were used to grow mycorrhizae. Mycos need roots to propagate and they love the Allium family (Onions, garlic, shallots, leeks ...). Apparently, they would get a good colony of mycos going on the leek roots, dig them up, cut off most of the roots to inoculate other plants/plots and replant the leeks to grow more.

I grow garlic and shallots anyway, but usually use old mix to grow them in. This time, I decided to use fresh mix and amended with an eye towards the recycle.

My mix is somewhere between LC's #1 and NC's mix, but not quite as hot. Garlic doesn't like a heavy N anyway. I did go about 2x as heavy with my slow release 'rock' stuff. Like Azomite, rock phosphate, greensand and so on. I also added gypsum, just for the garlic. I mixed a total of 12cf.

With this, I did 17-5 gallon buckets.12 of garlic and 5 of shallots, all planted the end of Oct.,2010. All the bulbs/cloves were dunked in MycoGrow Soluble before planting and everything got a soil drench of the same about a week later.

The garlic was harvested the last week of June,2011. All the buckets were full of fine roots. I left ~3" of roots on the bulbs and left the rest in the mix. I've since put all this in 30 gal trash cans, but have added no amendments or anything to 'recharge' the used mix. There is ~6cf of this. BTW, this used mix looks, feels and smells great! Doesn't seem 'tired' in the least, if that makes any sense. The shallots aren't done yet and haven't been harvested.

This *should* be full of mycos from the roots and plenty of BB from the EWC and so on, but I'm still debating on how to use it. Like use it straight up, after re amending of course, or, mix it 1/2&1/2 with fresh mix? I guess it depends on how much I need, because I'm going to do 2 things. One, I will mix up another fresh batch for this Fall's garlic and shallots. Two, all my old used mix will be going on my gardens. Some of it is 3 years old and time to retire. I'll do this after the first frost kills the veggies that are growing in it now.

What I plan to do for the future is nothing but recycled mix that has had Alliums grown in it for the first cycle. But, with a 8 month+ grow time, this takes a bit of long range planning. LOL

If anyone has any suggestions or ideas, I'm open.

that is just so cool WD. Is there such a thing as too many mycos? Doesn't seem like there could be. This is very interesting.
W

I don't see how you could have too much. I would guess they would self adjust to whatever balance works.

It dawned on me recently, that those 2 seedlings that so totally out grew all the others was planted in this very mix, a bucket of shallots that was harvested much later than the garlic and was just sitting there till I could get to it.

Wasn't even thinking of that when I planted the seeds. They were just in my hand and I pulled a bit of mix away, dropped them in and covered them up, without a second thought.

I'd like to say it was the mycos and I think it was, but being 2 different mixes keeps me from saying it.

I'll do a side by side with inoculated and un inoculated mix of the same make up to make things even.

Was heading out to pick up a few amendments I was low on so I could start my fresh mix. Took a bad fall in the garage and fractured my pelvis.

This was on the 7th and I was in the hospital till the 12th. Thank God no surgery or pins/screws, whatever were needed. Just LOTS of pain pills, like 2 Norco's every 4 hrs, lots.

Anyway, hope to be able to use a cane sometime next week, for right now it's a walker only. My wife has been 'sorta' taking care of everything, since stairs are involved getting to my plants, worms, everything.

Never did get the amendments I need, but the big question is mixing up 12cf of mix or so before it freezes. I can plant the Alliums a bit late, perhaps Dec 1st, but that's really going to be pushing it.

Guess I'll find out about short 'cooking' times, but I will be adding some of the used mix and the microbes in it.

Oh no Wetdog, that is terrible. I am glad you are alright. Geez that sounds way to painful.. Get better everything else can wait till you are.

Sorry to hear about the fall Wet. Hope the recovery is quick for you.

Great post about the soil. Great read. My question to you would be: What were you going to amend it with, not the new batch, the "cooked" batch? Something for a fresh source of N? Lime maybe? And how would you use it? As a layered (ala supersoil) or straight media?

Get better Wet.....sorry to hear about the fall. I broke both my arms in 3 places on each arm in a bad fall off a rope swing over a cliff. I can remember that pain and don't wish it on anybody. Enjoy the pain meds....

I also broke my ankle ... so broken things that do not allow you to move are a PITA.

Thanks to all of you.:heart:

The last couple of days was like turning a corner. I was able to take a few steps without the walker or cane.:clap: Not much, but way more than where I thought I'd be at this point. Figured that would be 2-3 weeks off.

Still have to take it slow, but I'm very heartened by the healing speed. Won't be doing any :dancing: anytime soon, but if I can get propped up in front of a wheelbarrow with a shovel .... :icon_smile:

BBFan said:
Sorry to hear about the fall Wet. Hope the recovery is quick for you.

Great post about the soil. Great read. My question to you would be: What were you going to amend it with, not the new batch, the "cooked" batch? Something for a fresh source of N? Lime maybe? And how would you use it? As a layered (ala supersoil) or straight media?
Click to expand...

For sure some N, but I'm still debating on the others. I did add quite a bit of very slow release stuff, like the kelp meal, greensand, rock phosphate, gypsum and Azomite. Those are probably just starting to get broken down good and I was thinking perhaps 1/2 the original amounts on these and full amounts of N (alfalfa and soy meal), and the bone meal and of course, the EWC.

I have right at 45-50 gallons of the 'inoculated' mix with the majority of the Allium roots left in. What I plan on doing is mixing this with the fresh mix. More than likely at ~25%. I mix up 2cf at a pop in the wheelbarrow (15gal), and was thinking of adding 5 gal of the recycled mix for a total of 20.

It will be more to inoculate the fresh mix than anything. It really looks and feels good, like it was fresh mix rather than used/recycled.

I do want to keep some separate in a small trash can (15 gal). NC is more than correct about un-amended recycled mix for fresh clones and seedlings.

Glad you're making progress Wet. I can offer no advice, but I wish you well.

I'm doing some testing right now with straight recycle. Didn't add anything other than a top dressing of ewc (love that stuff) for N. I started with kelp and cottonseed meal in the initial run. Cotton seed meal is 6-2-1 and very slow to break down (can't find soy locally but I think the cottonseed is similar). We'll see.

The other thing I'm thinking about is lime. My tapwater runs about 8.2 so I don't think I need much when using it, but I've been collecting and using rainwater as much as possible which is below 5.0. Plants have been loving it but I may have used up all the lime that I had put in the first batch. Not sure, something to watch.

Thanks for your thoughts, let me know how things go.
R

I have alium the flower variety growing, can i just grab some of the soil around the roots and toss it in my new soil? Not very scientific I know.
W

Rosebud said:
I have alium the flower variety growing, can i just grab some of the soil around the roots and toss it in my new soil? Not very scientific I know.
Click to expand...

Is the flowering type like onions or leeks where you can trim the roots and replant the bulb?

That's what the Rodale group did. Trimmed roots from leeks with the myco growing on them to inoculate other patches and replanted the leeks to grow more roots, repeat.

Yes, and they look kinda funky at the root level, now that you mention it. Can you see the myco growing? Is it white?
W

Haven't done it yet, but I guess I should check the pH of the old mix to see about the lime and if more is needed.

I did add gypsum to this mix, recommended for the garlic, mainly for the sulfur. I'll be adding it again. Doesn't do much for pH, but does have a ton of Cal. Gotta balance the 2 to avoid lockout. BTW, garlic likes the same pH range as mj.

Anyway, with the 'old' mix, I had used about 1 1/2 cups of lime/cf (1 cup powdered and ~1/2cup of pellets) and 1 cup gypsum/cf. No idea how much was depleted during the 8 month grow., but everything grew great with these amounts.

I guess I could make the fresh mix a touch hotter and add nothing to the recycled mix, using it to bring everything down a touch. Like mixing 15gal or, even 20 of the fresh 'hotter' mix, with 5 gal of the un amended old mix.

I really need to see where the old mix's pH is at. That would give me some sort of idea.

Rosebud said:
Yes, and they look kinda funky at the root level, now that you mention it. Can you see the myco growing? Is it white?
Click to expand...

Sorta, most of it is microscopic, but white fuzzy looking stuff is what you're looking for, towards the ends of the roots, the finer ones.

CHOCOLATE IS A VITAMIN

take it slow and easy, my friend.
good thread, good info. we couldn't find the soy, either, and used cottonseed.
W

I can't find it here either.

Surprising with all the livestock around here. Finally found some when I visited relatives who have a dairy. Got it at the local Feed&Seed for $18.50/50lb bag.

Took a year, but that 50lb bag should last a looooong time using 1-2 cups at the time.

Rosebud said:
I have alium the flower variety growing, can i just grab some of the soil around the roots and toss it in my new soil? Not very scientific I know.
Click to expand...

Hey Rose, The instructuions say add a tablespoon per plant in the clone hole,or around the seed. seems to do the trick.It's 2.50 and does 6 to 8 plants, by the time I transplant the clone to the bigger pot, the mykos are doin there job i figure. It only cost me 30 cents a plant. Plants are smileing right now!! 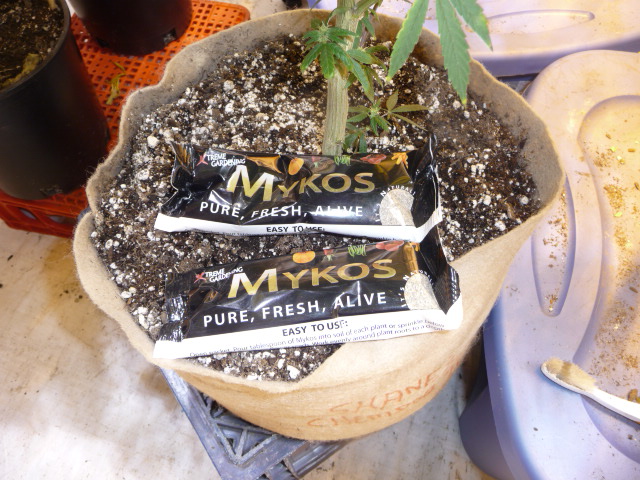