Houston we have a PROBLEM

I'm a little confused by your wording. Do you mean you put them into a flowering light cycle two days ago? Or are you re-vegging your plants?
W

wireman15 said:
no they just came out an only two of the eight are having this problem
Click to expand...

When plants come out of flower, they are harvested.

ok ok they just came off of the 12/12 light cycle. I would post pics but file is to large when i try an upload it.
S

wireman15 said:
ok ok they just came off of the 12/12 light cycle. I would post pics but file is to large when i try an upload it.
Click to expand...

Lets get on the same page.

Plants are under either a 24/7 or a 18/6 lighting schedule for the time they are in the vegetative cycle.

Then they are put into flowering by giving them only 12 hours of light each day.

Then you harvest the plants, dry the bud and cure it.

Exactly what are you doing? Please explain.
W 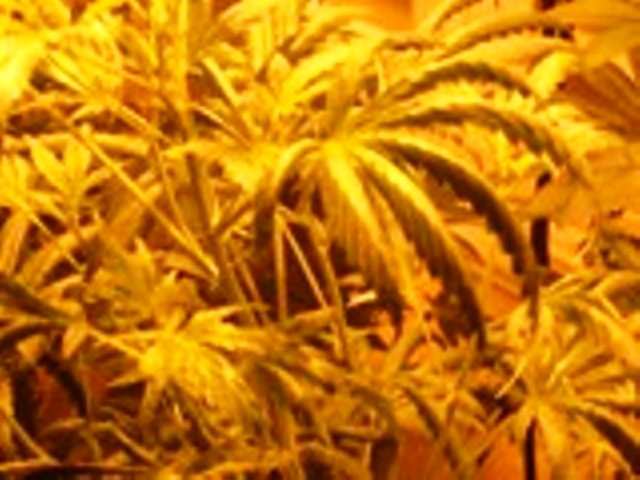 Ok, NOW I know what you're doing. You've just sexed your plants with a 12/12 flower long enough to tell their sex.

Now you're back on an 6/18 lighting schedule to revert the flowering plants back into a vegetative state. You should put the lights on a 24/7 schedule. It'll make the plants return to vegging faster.

The problem you're having sounds like nute burn to me, and the pics sure look like it. When plants are switched between cycles as you've done, the plants go into a dormant period that can last a day or a week. This is the plants reaction to the shock of it's "seasons" being reversed. During that dormant period, while the plant is recovering from that shock, very little nutrition is needed by the plant because it's really not doing anything. The nutrients that it is absorbing with it's needed water is over kill for now and is hurting the plant.

Of course, if all of your other plants are doing fine with NO trace of this problem, then that would lead to another whole set of possibles. Did those two plants have reason to stress more than the others? Damage to the root system?

If all of the plants were treated equally, then I would suggest the following:

Cut your nute strength in half for a week or so and watch the plants for recovery. It may take as long as a month to reveg the plants. When an obvious new growth is happening, increase the amount of ferts to 3/4 strength and then a few days later, full strength. Watch the plants for any sign of burn again and if it becomes apparent, back off on the strength of the nutes again.

This is a common game played among MJ growers. The nute game. There are so many strains out there now that there simply isn't a common nutrient for all of them. You have to watch your grow very closely until you find the correct strength for the crop you're growing. The manufacturers suggested mix is just a starting point. It's not written in stone.

When referring to the stage your plants are in, you can say that you've just sexed your entire grow and are re-vegging the plants. That way, everyone will know exactly where you're at.

You might think about using clones for each of your new crops. It's a real time saver. Lots of people here can get you going on cloning. It's not as hard as it sounds.

Good luck to you man.
W

thank you Stoney Bud I will monitor them an keep you in the loop if something changes.
C