Cops shut down one of Alberta's largest marijuana grow-ops yesterday, seizing more than $5 million worth of weed.
The RCMP-Edmonton police Green Team, supported by a cadre of colleagues, moved in on two remote properties near Evansburg - a village about 100 km west of Edmonton - yesterday at about 8 a.m.
They found 12 greenhouse-like buildings, housing 5,523 plants in various stages of growth, and 11 kg of processed weed.
That translates to more than $5.5-million of dope, say cops. A plant ready for harvest is worth about $1,000. "It's definitely in the Top 10 (busts)," said the Green Team's Det. Darren Derko, who had been to the site where cops were destroying the crop by burning it.


Because most of the plants weren't mature, Derko said, smoke from the fire wouldn't get anyone high.
"You just stand back and let it burn," he said.

Mountie spokesman Cpl. Wayne Oakes said they figured the plants, if they'd all grown to harvest, would have produced three million joints, or marijuana cigarettes.

"That's almost enough for everyone in the province of Alberta," said Oakes, stressing the size of the operation.

Police wouldn't say whether the grow-op was tied to organized crime, or where the dope was to be shipped.

Nor were they certain yesterday how long the operation had been there.

No weapons were found at the site, which was well concealed on properties skirting Chip Lake.

"Natural vegetation provided a natural camouflage. You would not have seen them simply driving by," said Oakes.

And the nearest neighbour to the rural property was a fair distance away, he added.

Police arrested four men at the grow-op when they moved in. One fled, but was tracked down by a police dog. Later, another man and a woman were arrested.

"They ended up showing up at the grow-op while we were out there," said Derko.

There was a cabin at the operation for people to rest, Derko added.
While the bust was a big one, it will likely have a negligible affect on the marijuana trade in and around Edmonton, said Derko.

"The marijuana business is funny, because there's such a supply coming out of B.C.

"So I don't think it will effect the price in Edmonton. You can get it anywhere, anytime."

Derko said he'd like to think the big bust is a message to those considering setting up a grow-op of their own, "but it seems like if there's money to be made, there'll be people to grow it."

Police didn't disclose the charges the six people arrested were facing, saying more charges were anticipated.
The two-week investigation into the operation was sparked by a tip from a concerned citizen, said Oakes, who praised the tipster for coming forward.


I know they're just doing there job, but damn, why burn it!!!
Aparently it's the largest drug bust in Alberta ever. 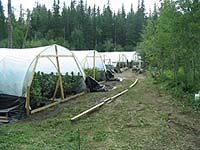