HYDROPONICS : Getting Rid Of Slimy Roots

Oxygen is written as O2 when there are two oxygen atoms in the molecule. Pure oxygen doesn't generally exist as individual atoms, two oxygen atoms bond together to form an oxygen molecule. This is because oxygen is highly reactive, disconnected atoms have a very strong tendency to form bonds.
B

My home is already smelling real good this morning &#8211; you all have a great Thanksgiving feast and be especially thankful today if you live in America, the land of opulence and plenty FREE food.
G

Hey Grunt Brothers! I hope you call yourself that because of all the great SEX you’re having and not from a lack of intelligence and the fact that you just learned to speak and type! Your post here was very smart and helpful to new hydroponics growers. I just wanted to add something to your words of wisdom. I hope anyone who has a “slimy root problem” follows your remedy to clear away the slime. After the slime is gone and you’ve flushed your system, start following some preventative measures to make sure this killer problem never raises its ugly head again.

Slimy roots may be a sign of algae growth but this is just a symptom of a handful of problems a new hydro grower can easily correct. There’s a really cool new hydro system I got just to experiment with called, “Current Culture-Under Current”. You don’t have to buy it, but if you go to their website they’ll teach you the basic good practices of hydro growing so you won’t ever have this problem again. (You can copy it and build your own system for real cheap!) Slimy roots and algae growth are caused by several factors you can easily prevent from ever happening in the first place. It’s called “Preventative Medicine”.

Thanks to simple technology, a healthy hydro system has these things happening:

*Your water/nut solution is always 10°F LOWER than the ambient air temp of your grow room.

* Your water/nut solution at the correct pH is always circulating through your system at a brisk pace like a clear mountain stream.

* Your water/nut solution is always bubbling with fresh air by putting ample air stones in your nute reservoir.

* Your grow room AIR is always fresh with good ventilation and at the correct temperature and humidity levels.

* And last but most importantly, your entire system under your plants where all the water is, is completely and I mean COMPLETELY sealed off from your light source. Your plants should be the only thing getting light.

30 years ago when I got my first hydro system I was stupid and didn’t know all this because I didn’t read and learn first and got MAJOR slime! It was so bad it killed off my plants and I ended up taking that system to the dump (thinking it was the system’s fault)! Luckily I realized I didn’t know what the **** I was doing and started reading how to grow right. The shock of my hydro failure was so bad I completely switched to growing in soil and that’s what I use now in my commercial operation and even with soil those same principles I listed above still apply.

New growers also screw up in the harvesting process. After spending good money on super seed strains with high THC and CBD values and they’ve grown an amazing crop, they think they’re in the clear when it comes time to trim their Buds. They either hand-trim or get a trimming machine with blades to make the trimming job go faster. Either way, they end up stripping those beautiful Buds they’ve grown of a lot of their potency by touching up their Buds like crazy, or pulling a lot of the resin and trichomes off as it sticks to their blades, either on their gloves and scissors or to the big bad blades on those bladed auto-trimmers.

As a large commercial organic medicinal grower now, I can’t afford to make these simple mistakes and that’s why I use my auto-trimmer of choice. It’s called a, “Tom’s Tumble Trimmer”--TTT for short. What makes it so special is that all my valuable resin and trichomes never stick to it. The TTT tumbles the Buds with a solid patented food/medical grade mesh that allows the Buds and trim to KEEP their good shit. The properties of the mesh doesn’t wear off onto my Buds either, so they’re always clean medical-grade certified. We got 5 of them to trim our 5000 plants every harvest (4 times a year!) and they never need cleaning or maintenance cause nothing sticks to them. So my whole operation is solid, healthy and organic from beginning to end thanks to Tom’s simple but powerful technology.

If you’re reading this and you’re just new to hydroponic growing please do your research first to learn the basics so you don’t get slime ever. Slime build up will kill your plants and all that light power energy money will have gone to waste. You’ll not only have wasted 3 months of time but your valuable plants too. Growing healthy means your plants will be huge in yield and as potent as the best pro growers' stuff out there. But it all depends on you with what ever hydroponic system you chose, to learn the simple technology behind it first, so your results will always be kick-ass powerful and potent!
J

Useless said:
Just a quick heads up for everyone -

It should be noted the dilution ratios above are for basic 3% hydrogen peroxide. The same stuff you buy at the pharmacy.

However, if you buy your H2O2 at your hydroponics store, most of them sell food grade H2O2 which is 35%. If you use the dilution ratios above i.e. 10 mil/gallon, with the food grade H2O2 you will fry your roots. Might as well try hydroponics with pure bleach for a nutrient solution.
So, if using food grade/35% H2O2 to cure pythium or other bacteria and fungii that can plague a hydro grow, use only 10-15 DROPS (from an eyedropper) per gallon. As a preventative add 5 drops per gallon of solution each week.
Click to expand...

JJ -- Welcome to MP I don't get out much but these guys won't steer U wrong !-- I'm in the process of shutting down for awhile but I run Aero under LEDS with a live res -- I saw peroxide and hydroguard and had to comment -- peroxide is for a chemical Res -- I use some stuff called Voodoo Juice that has all kinds of beneficial microbes- -If I remember right hydroguard has beneficials in it so it would not be compatible with using peroxide -- The voodoo juice is expensive but U can get the same results with Richie Riches Hydro tea !--Do the research and don't take my advice on hydroguard -- I smoke a little weed and have been wrong before !-- Best Wishes and again Welcome to MP !

This is what's left of 8 BC big bud seeds that popped at least 2 weeks ago. The roots got slimey and i cut them off and cleaned the tub. I've also been battling thripps and sprayed these, the 2nd spray did them in i think (soap). Maybe the soap caused the slimey roots. In any case, I'm about ready to give up on these. I assume they are in shock. I do see some new roots but I'm thinking they will never recover now....
latest battle has been Ph.... keeps rising fast, I assumed more nutes, still no eating or drinking and pH up again!! I've dumped 30 mil down into a 60L rez in 2 days, something is way wrong. 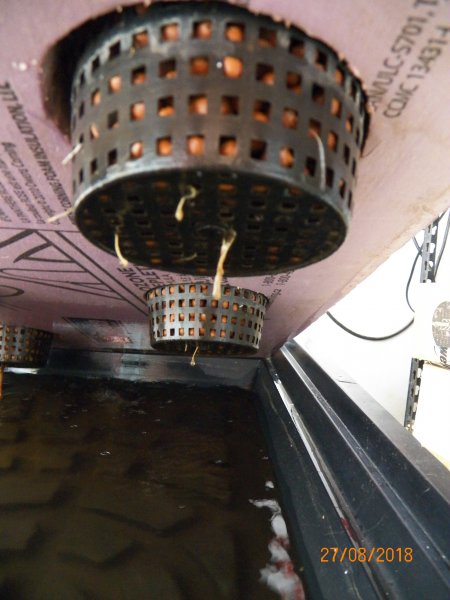 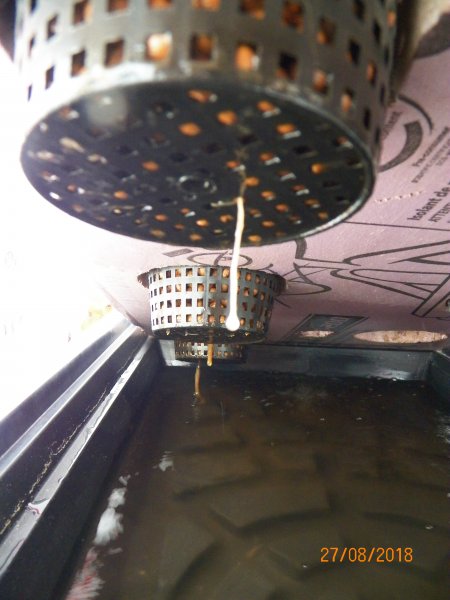 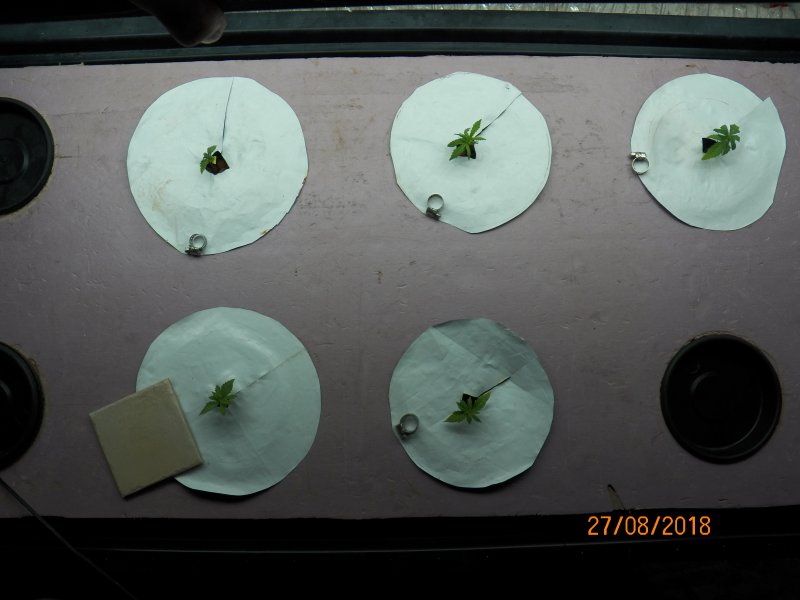 Useless said:
Just a quick heads up for everyone -

It should be noted the dilution ratios above are for basic 3% hydrogen peroxide. The same stuff you buy at the pharmacy.

However, if you buy your H2O2 at your hydroponics store, most of them sell food grade H2O2 which is 35%. If you use the dilution ratios above i.e. 10 mil/gallon, with the food grade H2O2 you will fry your roots. Might as well try hydroponics with pure bleach for a nutrient solution.
So, if using food grade/35% H2O2 to cure pythium or other bacteria and fungii that can plague a hydro grow, use only 10-15 DROPS (from an eyedropper) per gallon. As a preventative add 5 drops per gallon of solution each week.
Click to expand...

ANYBODY?
I read the first sticky post as cleaning infected equipment with the 35%
He mentions a net pot but nothing about plants or medium...
Is 10mL per gallon okay to run through an empty system (to clean it)

There is a 60L tank under this tray and you can see the fountain at one end and the drain at the other where it falls and splashes. It seems to me that's plenty of oxygen and I'd rather not add bubblers but I got slime to form on the drain and pump (gross)... I'll clean again and rinse with H2O2 for a few days.

Is this enough oxygen ?

@sopappy what is you reservoir temp?

pcduck said:
@sopappy what is you reservoir temp?
Click to expand...

I didn't want to overdo it with the H2O2 either, I use 10mL per 40L (10) initially and no maintenance doses. It's a 40-60L ebb and flow tub that I use as re-circulating, water level usually half inch below the pot.

The title of this thread always reminds me of Calvin and Hobbes.
You must log in or register to reply here.

K
root rot? I am sure this has been answered before lol

Step-by-step Guide on Shipping Clones and Clippings (with pictures!)