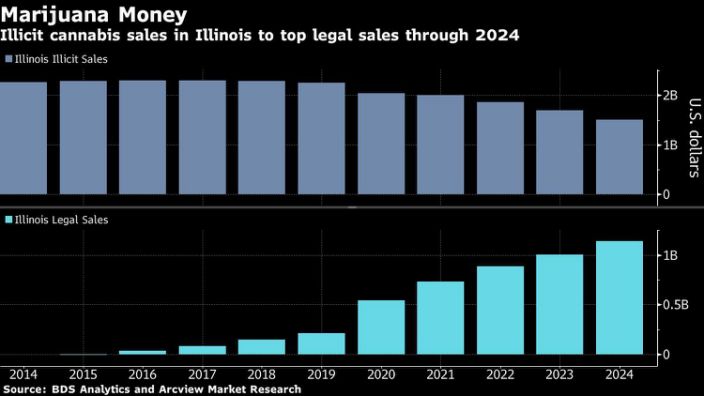 Coming off a dismal year for the industry, the launch of adult-use sales in Illinois is considered a harbinger of better things to come in 2020. The state is the sixth most populous in the U.S., is surrounded by potential customers in states where sales are still illegal, and will likely pressure others to follow suit.

“The idea of a domino effect should not be discounted,” Cantor Fitzgerald analyst Pablo Zuanic said in a note published Thursday.

Illinois is the 11th state to legalize recreational use of the drug, which remains illegal at the federal level. Expectations are that Illinois can generate between $2 billion to $4 billion in annual legal sales at maturity, well above the less than $300 million spent on medical cannabis in the state in 2019, according to Compass Point analyst Rommel Dionisio, who believes Cresco Labs Inc. and Green Thumb Industries Inc. are best positioned to benefit.

However, illicit sales are expected to continue to outpace legal sales through 2024, according to research from BDS Analytics and Arcview Market Research.

Cresco served 3,145 customers on New Year’s Day at its five Sunnyside dispensaries in Illinois, selling 9,258 cannabis products at an average ticket price of $135, the company said in a statement.

“The number of people who waited in line in Chicago in cold winter weather and then left with smiling faces after waiting upwards of seven hours was very reassuring that the acceptance of cannabis is real,” Cresco President Joe Caltabiano said in a phone interview.

Caltabiano believes the Illinois market could generate as much as $4 billion in sales at maturity, and intends to increase Cresco’s market share above the 25% it achieved in the medical market.

Green Thumb, meanwhile, “served thousands of people” on New Year’s Day from its four stores selling recreational marijuana, it said in a press release. It opened its sixth Illinois store on Jan. 1 and plans to expand to 10 in the state.

“There’s a lot going on in Illinois,” Ben Kovler, founder and chief executive officer of Chicago-based Green Thumb, said in a December interview.

The company, which has cultivation and manufacturing facilities in Rock Island and Oglesby in Illinois, is adding flower rooms, growing capacity, automated production, staff and hours. It expects to spend more than $20 million to scale up “as quickly as possible,” Kovler said.

However, Kovler said he expects supply to fall short amid a “tidal wave” of demand given the limited time companies had to grow and process products since the legislation was signed this past summer.

Chicago-based Revolution Enterprises Inc. in August began expanding its facility near Peoria, Illinois to meet new demand. The current supply chain and growing area may not be enough given the demand for medical and recreational use, said Mark de Souza, chief executive officer of Revolution.

The legalization of adult use marijuana has many complexities and layers in Illinois. It’s put a brighter spotlight on long-lingering concerns about who has suffered from the war on drugs, how to bring equity to the emerging industry and how to meet projected demand.

Illinois Governor J.B. Pritzker has granted 11,017 pardons for those with low-level cannabis convictions and more than 700,000 arrest records may be eligible for relief because of the state’s new Cannabis Regulation and Tax Act, according to a statement on Dec. 31.

“Every state that has legalized cannabis has seen high demand and long lines in its earliest weeks, and to be sure, our state will too,” Pritzker said in the statement. “But unlike other states, in Illinois, we purposely built a system where the market has room to grow, so that entrepreneurs, including especially those from the communities devastated by the war on drugs, will have real opportunities in this industry.”

I'm sure many are excited about the law change and I agree those with marijuana possession charges need to be pardoned.

My problem lies with the cannabis Suppliers!
Every producers product I've tried in Illinois has been SubPar.
Dispo's are charging premium dollars for inferior products and getting away with it.

People of Illinois:
DEMAND to get what you are paying for!
Quality products will be produced when we stop buying Garbage!
You must log in or register to reply here.