hello all..finally after anticipation some of these stupid seeds decided to sprout..not all, but some (if they all sprouted, i'd have my own personal cannabis army)..sooo, i got 4 thus far..had some complications with the first initial 2..but we'll see how that goes..the other two cracked, and i put them in those plastic dixie cups..poked holes in the bottom, for drainage..placed in some soil..like a scoop..took a spray bottle and squirted it up a bit to get it moisty..added another layer..squirted that up..then added a top layer and poked a hole down the middle and placed the seed root down..that way, the tap root knows where to find the water and will hopefully go straight down..done this for all of 'em..now we just gotta wait..and yes it is bagseed..but, to flip it up a bit..i do get kinda envious when i read about you guys and your "lowriders," "white widow" and other various super crossbred super THC crystalized strains, as opposed to my dumb 'ol bagseed..don't get me wrong, i'm not hatin'..i'm just envious...soo, i'm gonna just make up my own strain..so it's no longer bagseed that i'm growing, it's "Euphoric Acoma"..(sounds alot better than bagseed doesn't it?..

"hey what kind of plant is that?".."oh that? it's Euphoric Acoma generation 1, which is only found on the Galapagos Islands..it has been genetically crossbred with Summer Love and Monkey Toe Nail, to give it that out of body experience high..." (lol..went a little crazy with scenario 2 there..)

so hopefully these will make it, unlike my first grow..errr..plant rather..that didn't last 2 weeks..lol..i'll post more if they make it..
P

"hey what kind of plant is that?".."oh that? it's Euphoric Acoma generation 1, which is only found on the Galapagos Islands..it has been genetically crossbred with Summer Love and Monkey Toe Nail, to give it that out of body experience high..." (lol..went a little crazy with scenario 2 there..)
Click to expand...

hahah funny! I just completed my grow cabinet...sheesh it was a lot of work culking, sealing and building but FUN--now I get my turn at growing some of these Euphoric Acoma's in hydro, the right way!
C

thanks pranic and thanks sicnarf..way to go 'sic on the hydro! you gotta tell me how that thing works out for ya..make sure and post some pics man..i wanna go 'dro, but damn that set up looks like rocket science..

chong420 said:
which is only found on the Galapagos Islands..
Click to expand...

So thats why all those iguanas are just layin out in the sun fat and lazy. you just figured out that Darwin had it all wrong. hahahahaha. It was all in the bud.

Dude, The strains do make a difference, but nobody will knock you for bagseed. ****, I got two "designer" strains and still growing a couple of bagseed. Just for Shits-n-Giggles.

Good luck with the hydro. Can't wait to see those pics.
C

thanks mutt..i'm hopin this time around it goes well..if not, third time is always a charm..
S

Dude, The strains do make a difference, but nobody will knock you for bagseed. ****, I got two "designer" strains and still growing a couple of bagseed. Just for Shits-n-Giggles.
Click to expand...

hehe. Mutt that was almost nice...until

alright..i finally got her growing..i had two, but lost the other one..i stuck some worms in the cups, and like an hour later the sprout started wilting (damn worms!) and the other cup with the other worm, wiggled its way to the top and was flopping on the countertop..so i threw him back outside..thank goodness, cuz that ones lookin' like a champ! plus i think i may have overwatered the other one..but anyways..i'm back to one..and it's doing grreeaat! tomorrow it'll be a week old and it's already has it's second node..(dunno if this is good or bad..do males generally grow faster than females?)..been watering it everyday, not to the point where the soil is soaked or anything, but just enough to quench it's thirst..plus i've been using superthrive..so i dunno if this stuff really works or what..but i do know, when i started growing the first plant (dirt)..and was just using tap water, it wasn't growing this fast! weird..but so far so good..i'll try and get some pics happening..thanks for your help guys! i also went ahead and ordered some bubbilicious..said **** it and get some real seeds..so hopefully those will arrive without any problems..
C

one week today..plus i got a suprise in the mail today..my blue meanies spores came..pretty psyched..now i jus gotta wait for the set up to arrive!..hopefully my seeds will be as smooth as the spores... 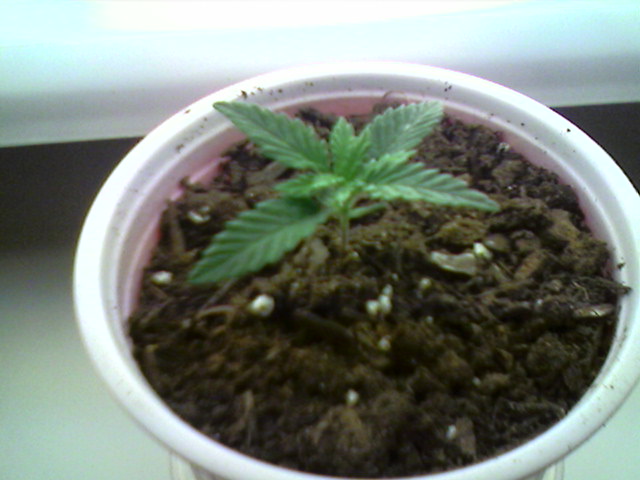 looks good chong420. your baby looks nice and healthy. keep it up.

i'm trying bro grunt, i'm trying..hopefully this one won't die on me..lol..thanks for the words..
S

I've gotta ask. Why did you put the worms in your plant containers? They're a good idea in an outdoor vegetable garden for adding Nitrogen to the soil, but don't use them in any indoor growing ever.

looks nice chong420....fingers crossed for a girl for you
C

Stoney Bud said:
I've gotta ask. Why did you put the worms in your plant containers? They're a good idea in an outdoor vegetable garden for adding Nitrogen to the soil, but don't use them in any indoor growing ever.
Click to expand...

lol..i think i read it somewhere, stoney..like for aeration of the soil..sounded like a good idea at the time..my friend asked me the same question..lol..
C

LdyLunatic said:
looks nice chong420....fingers crossed for a girl for you
Click to expand...

straight! thanks lady..i hope she's a female to..but if not, like my previous plant that died after 7 days of sprouting..i'll smoke it anyways..lol
C

aaaaaaaand YES it died..AGAIN..damnit..i thought i was doing soo good this time too..didnt' make the 7 leave stage like i wanted..major bummer, but oh well..i think the result time was over watering..AGAIN..plus waaay too much superthrive..lol..i dunno guys that stuff kinda kicks ass..but thats my opinion..she was lookin' kinda healthy right before she died..and in two weeks too..(beats my last plant that lasted a week)..compared to the first plant with no superthrive..wierd..she kinda looked crazy for a minute before she kicked the bucket..her third node was stuck in reaching for the light move, like "is she gonna make it? that's right live DAMNIT, LIVE!! STRETCH FOR THE GOD DAMN LIGHT!!"..leaves weren't really fully sprouted, so it was kinda stuck in slow motion...then slowly but surely the body began to die..and so i left the light on, hoping..just hoping..but nope..next morning she keeled over all sickly..plus for a moment, just a moment..i thought i smelled mj in the closet..like, "man she was starting to smell! alright!"..but no..it was superthrive..lol..damn you superthrive!! lol..i think she liked it..all in all i lost another plant, BUT my seeds did make it ok..righteous..so hopefully, i can start growing this Bubblicious..after i figure out how to keep bag seed alive..lol..plus my myco kit came..so i'll probably give that a go..who know's maybe i'll be better at this then horticulture..plus i'm thinking about getting an Emily's Garden..anyone had any luck with one of those? can't be that hard..looks pretty simple..maybe i'll go hydro..cuz organic for me is suckin dude! lol

When using superthrive you should only use about 1 single drop of it per litre of water, or 4 or 5 drops per gallon. Also, when I say "drop" I mean like a little rain drop, not much at all, superthrive is very potent stuff full of hormones and vitamins that your plant cannot handle to have too much of all at once. Also, when it comes to watering, poke your finger an inch or two into the soil, when that is dry, then it needs water. Only then. Good luck with the next one, we've all been there
C

thanks insane..yeah, i did put the one drop of superthrive in the gallon..but i was like feeding it to it everyday..not to where i was completely soaking or anything but enough to quench her..like a tablesoon or more..just enough where i'd see it go down near the stem..i dunno, but i think it took to it cuz she was "way" bigger than the first one i had..and i'm growin under 80w flouros..by the first week of my first plant it was barely growing out of it's first set of leaves..by the first week of my second plant, it was starting to grow its third set from the stem..i was like "DAMMMN!, it's growing!!" but then she bit it..it's not only after the fact that it died, that i actually smelled how strong superthrive is, cuz it reaked in the closet..so i dunno, i think i may have somehow fried her/overwater..lol..i was like "DAMMMN YOU SUPERTHRIVE!! and your craazy secret of how to grow big ass tomatoes and help trees and shrubs to look more greaner..DAMN YOU TO ****!!" so i dunno..maybe i'll try hydro..but i'd like to experiment with that superthrive..can you use that in hydro? got my girlfriend putting it in all the houseplants..says she can't see any difference..wierd..

Superthrive I add one drop per gallon. every feeding. no more. I don't even use the whole gallon. I have had great results, but like insane said that stuff is potent. 1-2 drops per gallon with my fert. thats all. I only feed once a week.
You must log in or register to reply here.
Share:
Facebook Twitter Reddit Pinterest Tumblr WhatsApp Email Link