RosterMan said:
I have had my share of dancers , air heads , druggies, and most losers.
But I never bragged or was proud of it.
Click to expand...

I just liked hippie chicks. Those gals were fun, knew what they wanted, and knew how to please. ☮

RosterMan said:
Must be Nice for a while having a Trophy Wife, but the novelty wears fast if she has nothing but looks.
I prefer a woman with a brain, decent looks , and able to carry an intelligent conversation myself.
Click to expand...

Hear, hear, as well as a pleasing personality and nice tits and ass

So did I. You lost me there.

This is my kind of woman. A little hippie.....a little redneck. Never a dancer and tits are real. Took one look at her and have spent my whole adult life with her. 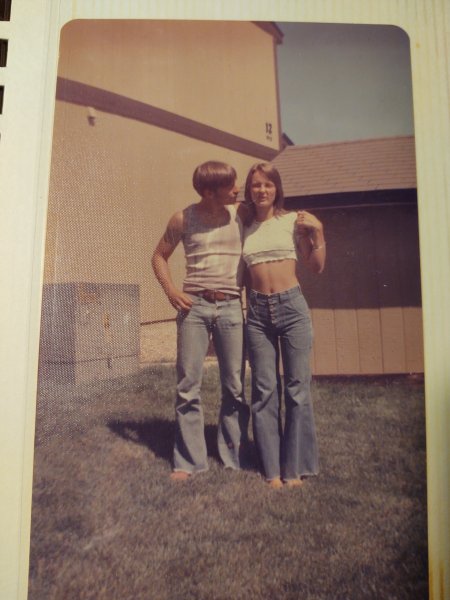 Starting off at 55F and 85% humidity with 5 mph breeze, cloudy morning with gorgeous afternoon and predicted to reach 74F.

Breakfast out with friend who has prostate cancer and whose last scan continues to show high PSA and appears to show it may be in one of his ribs as well. He is recovering from surgery and has worked rigorously hard at exercise to regain his continence and doesn't want to undergo radiation to address the latest issues, because the side effects will take him back closer to square one again.

He has decided not have radiation and to wait and see. His surgery could still be affecting his PSA and his rib could be from a previous injury that he doesn't remember. If it is bone cancer, it means it has metastasized, so radiation of his prostate and his rib will have little effect. He would rather have a short quality life than an extended one with side effects and discomfort.

He is of course doing a lot of introspection and he was actually in such a combative argumentative mood that we crashed head on almost immediately, but to his credit after I called him on it, he relaxed some and we had a pleasant visit and breakfast. I'm guessing my social consciousness may suffer as well when it falls upon me to face the same sorts of issues.

My second batch of Miso soup turned out splendid too, so looks like I've finally got my Dashi dialed in.

My young neighbor to the north graciously came over and dug out the rest of the bamboo in my back yard that we could get to. He also gave me the OK to pour Caseron in the crack between his contoured block wall and my poured retaining wall where the bamboo is squeezing through and tilting the retaining wall over. Technically that is on his side, but under a planter and patio so he can't get to it, and I wanted his permission before moving to Operation Scorched Earth to save my wall.

Well my tamaters and peppers are doing well, but none of my beans I had on to soak sprouted and it has been long enough after I added the rest of Uni's seeds, that it is clear they are no longer viable. Ohmmmmmmmmmmmmmmmmmmmmm!!!!!!!!!!!1 Rip Uni and thanks for the ones from the same batch last year, where 100% sprouted, with half being luxurious females.

Got some new beans enroute from over the hill and far away that I may pop a couple of, even though it is now late enough I will have to build a plastic cover for them to ever stand a chance of finishing outdoors before the rains bring on the powdery mildew and botrytis.

pute said:
This is my kind of woman. A little hippie.....a little redneck. Never a dancer and tits are real. Took one look at her and have spent my whole adult life with her.

Whoo, doggie! Gotcha a keeper there.

Tell the truth; did you see her commit murder and blackmailed her into marrying you?

RosterMan said:
Thats what I said but it just keeps going and going LOL
Click to expand...

Sometimes fun can get out of hand ..... History is our best teacher.

pute said:
Sometimes fun can get out of hand ..... History is our best teacher.
Click to expand...

Like I said all in good fun
But we do go right to edge .

Sometimes it gets out of hand and you regret it later.

Not me! I'm just a big ole sweetheart!

Happy 4th people , and remember be careful out there
I have seen hands and even heads blown off by these fireworks available today.
The best was a 12inch mortar failed to ignite, guy looks down the tube and blam-o head was gone.

pute said:
Sometimes it gets out of hand and you regret it later.
Click to expand...

Already did , I called in a clean room crew

Hippie420 said:
Not me! I'm just a big ole sweetheart!

You are the dangerous one Im sure

Hippie420 said:
Not me! I'm just a big ole sweetheart!

It's all good. We can fk with each other and have fun. But we do need to keep our families out of it because that can go bad really fast. Especially our Wife's.
You must log in or register to reply here.

S
First ever MJ grow on the balcony
2

My Frankenstein!!! Sharing my world with u guys.let me know what you think please
2 3 4