More than 4,000 pounds of pot seized near the border
Tuesday, October 24, 2006
U.S. Customs and Border Protection seized more than a ton of marijuana October 23rd and 24th. They estimate the street value at more than $3.5 million. The pot was loaded into three SUV's, which were stashed beneath some brush off the main road on the Tohono O'ohdam Indian Reservation. The drugs and vehicles will be turned over to the DEA for further investigation.

Jesus Rodriguez with the Border Patrol says it is not unusual to find large amounts of marijuana this time of year. He says pot growers are now harvesting their fall crops and trying to sneak them across the border. 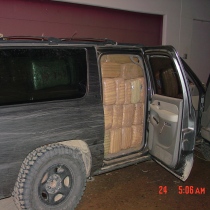 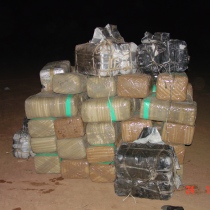 swag, but still a shame

They stashed 3 Black SUV's? and expected them not to get found? Oh well.
S

thats what the idiots get? i personally feel like thats just less weed kids can get there hands on to sell and get there butts in trouble with at school and home.
S

Oh man, that would have lasted me 10 lifetimes!!!!

((ROFLMAO)) Where I live the best weed on the street is sold by our cops after being "confiscated". It's been in the paper a few times... supposedly they found oh say 200 pounds, but strangely only 150 of it made it to the evidence room.
D

Where I live the last big shipment was found in a UPS Truck. It sucked the price of weed went up about $100 an ounce that was if you could even find eny. Thats when I started growing a Propetuel Harvest for the secent time. Last time i had to stop as the people next store told the poleice that they suspected I was a drug dealer since I had people driving to my house at 2 or 3am. I was not selling drugs. Thow I was growing so when some one else told use that the police where asking about my famale so to be safe we got rid of of all the weed and cleand every thang. Nothing ever came of it but better safe to do that then to be in jail!
M

damn 100 an oz that is still cheap as **** for where I live. we are payin over three for good stuff. its wacked

i agree with skunk, even though i am sure i have bought some of that myself its better then it ending up in kids hands. still a shame to see it go the "the man" though.
J

cmon that wasnt really so stupid. it was on indian reservation,guarenteed they have been using for a while. that was a snitch at work. no 1 is just going to leave that much herb not know the area and ppl.

this summer in north canton ohio there where 55 gallon trashbags littering the median on route 8. a state highway patrol man looked into one of the bags and it was stuffed with buds.
i think the last count was 45 trashbags of buds.

Mutt said:
They stashed 3 Black SUV's? and expected them not to get found? Oh well.
Click to expand...

Ravishing,a similar situation happens in my country except it's more than 1/4 of the raid.lol

they could have made those trucks obivous so they would get busted while the 3 semi trucks went through with no suspicion... each of those semi's having newhere from 50,000 lbs to 100,000 lbs? wouldnt that be a better strategy... lol just thinking...lol

it's called paying dues. The drug cartels need to sacrifice a pig to the political deities to ensure a future. It's pretty much just showing the masses the war on drugs is working. While they sacrifice a few pounds of ditch weed they probably snuck 100 million dollars worth of Coke into the U.S. Makes a few headlines and makes the tax payers feel good.
You must log in or register to reply here.
Share:
Facebook Twitter Reddit Pinterest Tumblr WhatsApp Email Link