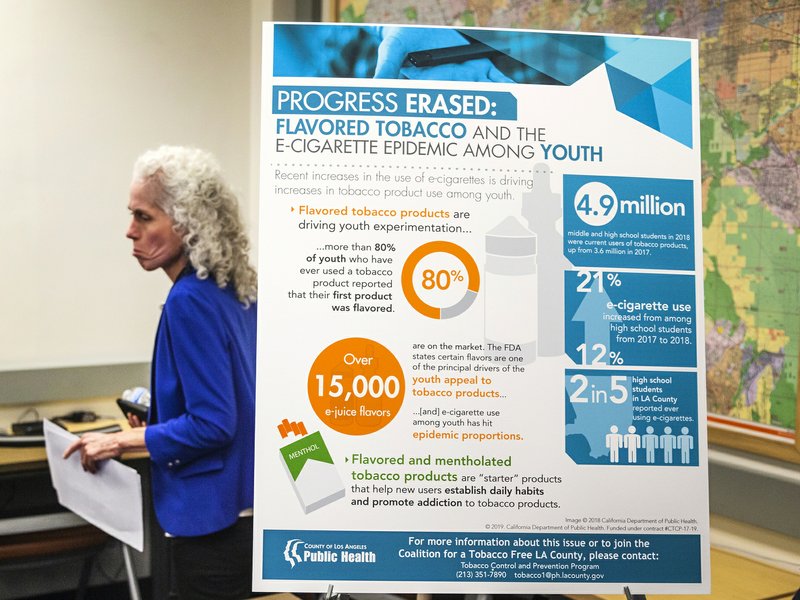 LOS ANGELES (AP) — Health authorities announced Friday they are investigating Los Angeles County’s first known death associated with vaping a marijuana product, and 10 other cases of lung injury have been reported that are potentially linked to the use of cannabis vapes.

The disclosure came on the same day that U.S. health officials renewed calls for people to avoid vaping until they figure out why some users are suffering serious breathing illnesses. Officials have identified about 450 possible cases, including as many as five deaths, in 33 states.

In California, health officials have identified 57 potential cases of acute lung disease among people with a recent history of vaping, beginning in late June. Some of cases involve people who vaped cannabis products purchased from unlicensed sources, though the agency has not provided a specific number.

In Los Angeles County, officials did not disclose the name of the deceased patient, who was described as an older adult, at least 55 years old, with chronic health conditions who was vaping a product containing THC, the high-inducing ingredient in marijuana.

“Vaping was a probable, potential cause of death in this person,” said Dr. Muntu Davis, the county’s health officer.

Overall, the county has received 12 reports of hospitalizations for pulmonary injuries related to vaping, all but one of those involving marijuana products.

For now, county health investigators have a puzzle.

No specific device, brand or ingredient has been implicated in the health problems. The known cases cut across all age groups, and people in varying health conditions. The cases are not concentrated in a specific area within the county, the nation’s most populous. It’s not clear if the problems are linked to a chemical irritation, an allergic reaction or something else.

There are “a lot of unknowns,” Davis told reporters at the county Department of Public Health.

The county began receiving the reports of illnesses in mid-August. In some cases, smokers were using cannabis products as well as nicotine vapes.

source::: https://www.marijuanapassion.com/forums/marijuana-news.15/create-thread
You must log in or register to reply here.