besides needing 55L/sf and 9 CFL's to cover the same area..

my question is whats the differents
Click to expand...

IMHO, it would be in your "penetration" of usefull light. CFL's lose intensity fast as you increase the distance away from the source.
I think mutt has a post somewhere here, probably in the lighting section, on the effects of distance on intensity of various lamps.

Well Hick your opinion was the only intelligent one I recieved on this subject (same question five other forums)..I couldn't find any difference except for the penetration issue also....I have 3 42w(150w equiv each) with 2750 lumens each and a temp of 2700kelvin..I'll be using these to light 1 square foot~(flowering) so I have 126W(450w equiv)with a total of 8250lumens....I'm well over the 50w/sf min and closer to the 10000lumens than the 5000lumens min needed...I have 4 strains started...NorthernLights #5,Skunk#1,BigBud and WhiteWidow...I also have 3 unknowns and 5 "MysteryMix".....I know the 3 unknowns are a southernQuebec indoor/outdoor strain but as of yet,unidentified...

I havent decided which strain will "volenteer" for the experiment but I'm sure one of the girls will be more than willing...the rest will be under my faithful 400's...

yep have that one in my library also...I found no charts for the spiral cfl's but did for a couple of t5's and 8's..since everyone loves bringing up the PAR issue,and almost none of the manufacturers provide that specific for their cfl's I was lucky enough to come across this little piece of info..hope its useful to ya...http://www.aquabotanic.com/lightcompare.htm

I think the reason you can't find and probably will not find any real documentation on spiral florous, is that they are "intended and marketed" for replacing incadescents. Every package with spiral florous pushes the "incadescent equivelent" and Lumen output. Most of the time I even have to flip the package over just to find the "actual" wattage. So when I'm designing my veg. box. the Wattage rule went flying out the window and just paid attention to the Lumen total needed. (Which is a royal PITA w/ spiral florous).
I have also noticed that the Heat output is higher with the spirals than regular tube florous. They've torched a top on me more than once.

Mutt , what are you using as a base line for the lumens off your spirals? I havent found good ones for veg yet but i'm still looking...I have noticed the heat is a bit much for such a small place but i'm sure i'll be able to rig up a suitable hood for them..the side lights might be a problem tho...

I have (4) 42W. Can be obtained at wal-mart. I think there around 2700+ lumens per bulb. (can't remember off the top of my head). Its written on the package. 42W is the biggest I seen there. BTW thats 42 "actual" watts. NOT THE INCADESCENT EQUIV.

This plant attached was grown in the veg. box. so it works. just gotta be on top of things with it. I'm about due for some root trimming though. 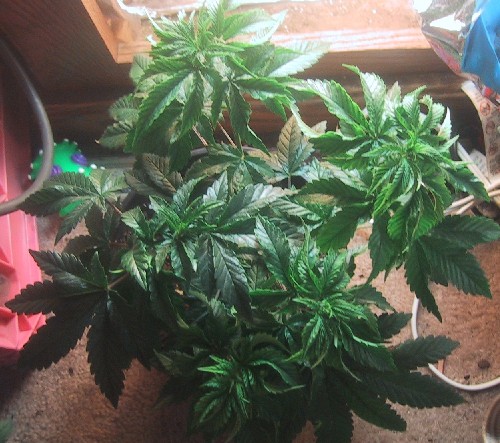 On a further note:
There is no way on Earth I could flower in that box. Esp. that plant. hehehehe. This is for Veg. Only.
Flower in a different cab. with a 250W HPS.
S

aren't the walmart bulbs(the 42w) in the 2700K temp range? I know it will do the job (i've used my 400w hps's in the veg room for years)but i was hoping it would make a better contribution in the flower room...beautiful girl BTW..what family is she from?

I'm not using cabs this time( except for the mom's) just using 1 square foot out of a 64SF room..I might just add the spirals to one of the 400's and track the progress....

They have both. They call em "cool white" and also "soft white". Not sure of the actual temps though can't find a listing. but the "Cool" or "Daylight" I'd have to look at the package again. They are more white/blue spectrum than the Soft white which is more yellow/red spectrum. Just gotta look at the package.

edit: The only "cool" white spiral I could find was tapered wider at the base than the end. The Soft white came both ways.

Oh yeah: Blue Mystic from Nirvana. (BlueberryxSkunk #1). Pheno types were all over the place though not a consistant strain IMO. just a heads up.

the 2 walmarts in my area didnt have the cools instock just the soft ones..correction..they did carry the small cools (11w~14w)something like 500~600Lumen each

This batch is from Nirvana also...but who knows....with a little luck and near perfect growing conditions i might find a keeper..er's...hopefully

have u guys checked at lowes i was there today and i think i saw the 40 and 60 w cfl spiral bulbs and they we pretty cool..... i also saw some cool white tubes r these the bulbs i need i think they where 40 watts also... i have two lamps for a spiral cfl and two 18'' tube, a 24'' tube and a shop light 48''... the 18'' and 24'' they r just fixtures and i am only plannig on putting them in the flowering stage unless u guys think i should go ahead and put them in about 2 weeks in veg

So I just got in with of the 100 watt flood light fixtures. Was needing to see the guts of the thing, hopefully I won't have too much of a problem finding and or making ballasts for several more bulbs.

A nice thing about getting these at a Home Depot, or Lowe's...Soon as I build something...I'll be taking the flood light fixture back...and swapping it in for it's price in bulbs. 4 btw.

I said that before ya?

Yes yes....I'm a big fan of vegging under CFL. MH is just too too hot. Nor anywhere near as cost effective and productive as vegging with gobs of CFLs crammed into a tight space and or focused just right on a plant. Emitting all the right colors that clear the way for reaching true, maximum vegetative growth.

i was at wal-mart today and i think i saw a 135 watt and 125watt when i got my 100watt but i am not sure if it is what yall r talking about.... it is not spiral it has a couple or horse shoe type tubes and it says it gives of natural glare free light and i hooked it up and yeah its bright it is call a sunlight bulb and it is a cfl so if u guys have and comments on this pls reply cause if they will work then i am going a getting a couple more...................... i also have a tube fixture that is 48'' what is a good farly cheap bulb i can use for sufficient results

stoner 420 said:
i was at wal-mart today and i think i saw a 135 watt and 125watt when i got my 100watt but i am not sure if it is what yall r talking about.... it is not spiral it has a couple or horse shoe type tubes and it says it gives of natural glare free light and i hooked it up and yeah its bright it is call a sunlight bulb and it is a cfl so if u guys have and comments on this pls reply cause if they will work then i am going a getting a couple more.
Click to expand...

Thats the Lights of America 25 watt you mentioned. 6500K...good bulb for the first two stages of growth. A better bulb is down the isle in the form of a 2-pack GE spiral...they're the same for less...and they operate quite a bit cooler than the LOA bulbs.

no i was talking about the compact fluros but it is not in the spiral design it is the same thing but just different i think it is a ge but any ways it is a 100 watt cfl i was just woundering if this is a good buy or if i messed up if so i am going to get anothr one............. also i have a dual fixture for the tubes what would b a good light for that like a kitchen\bath or the regular fluro shop light or maybe even the residiental bulb the plant\aquirium one just did not give the amount of lumens the others did plus they were only 25 watt.............. and how many cfls r ideal for about 4 plants maybe three..... and the watts that most of u use..................
You must log in or register to reply here.
Share:
Facebook Twitter Reddit Pinterest Tumblr WhatsApp Email Link