As most of you know, I love being able to re-purpose things. I had a friend that had one of those temporary carports that collapsed last winter. He thought I might be able to utilize some of the tubular steel. After I got the pieces to my place, I realized that the flanges that attached the carport to the ground would be ideal for the center axis for my compost barrel. I am still working on it, but this is where I have gotten so far.

I attached one flange on each end of the barrel in the center. The flange had a stop at the end, so it had to be drilled out. I attached the flange to the barrel and used a 2" hole saw to drill through the stop on the flange and the barrel. The bar was cut so that the ends would rest on the posts I already had set. The tapered end of the center bar will have a crank to turn the barrel. The other 2 holes that I have drilled will have 1" Sch 40 PVC put through them. The PVC will have a lot of holes drilled in them and serve a dual purpose--to break up the compost and to aerate the compost.

This will be mounted on some 4 x 4 fence posts that I already have concreted into the ground. They were posts for a fence I had in front of a propane tank that is no longer there. I was trying to figure out whether I should pull them this next spring. Well, now they will serve as the support posts for the barrel axis.

I will update as I get more done. I need some materials that I don't have and can't get up here to finish off the door. 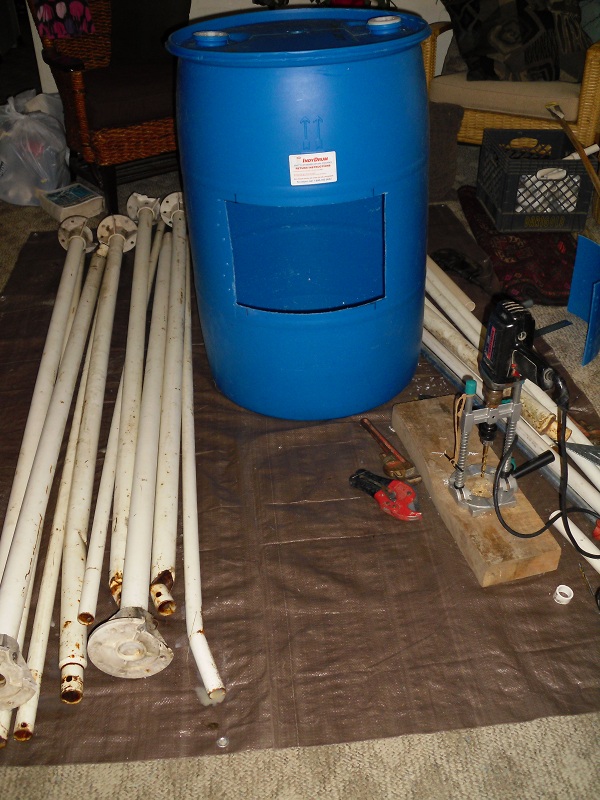 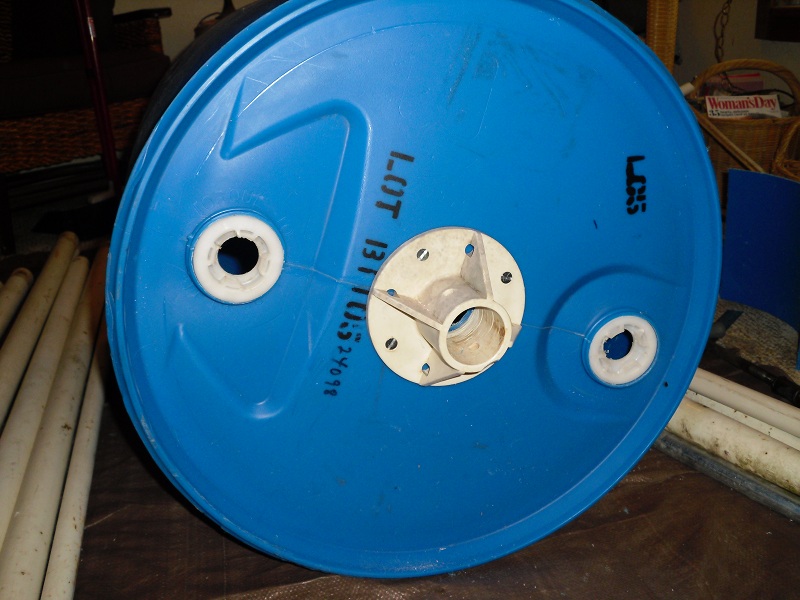 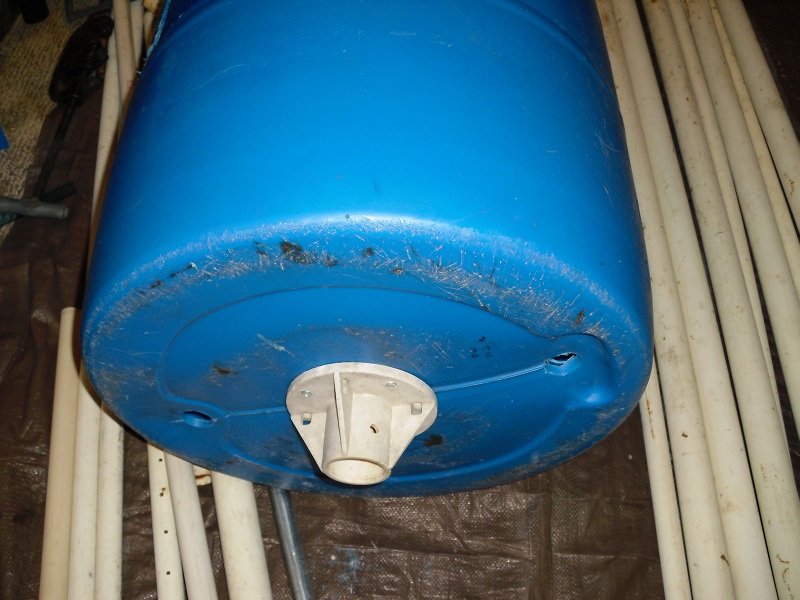 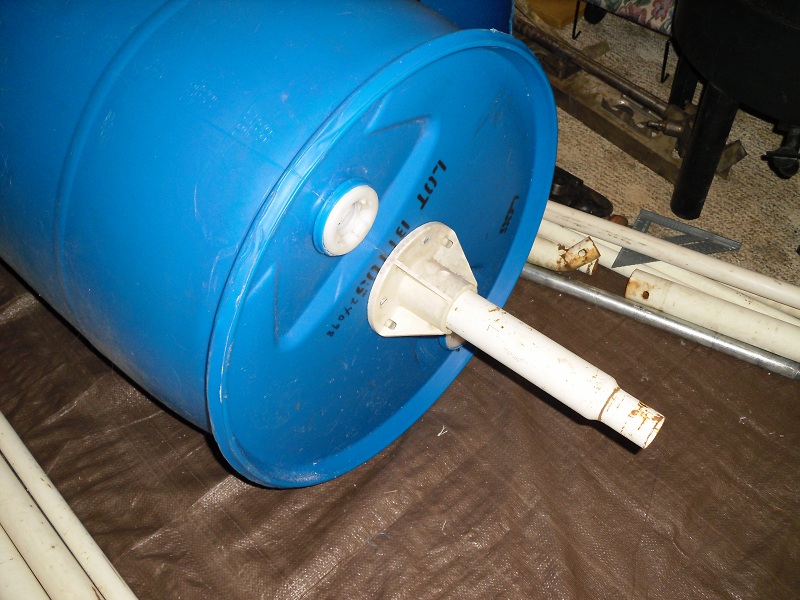 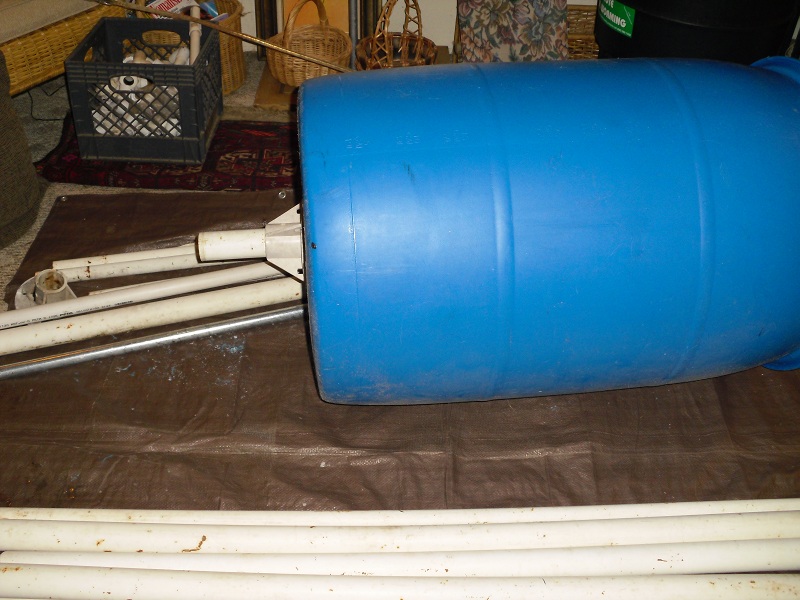 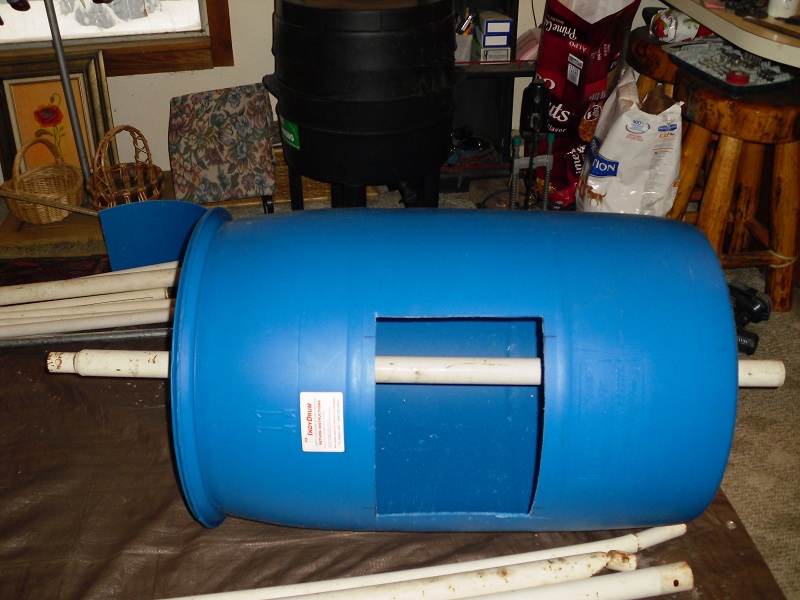 :aok:Great idea and way too make it.

This is just my thinking I wouls cap them and uncap them only when you turn it. The cold fresh air flowing thru the pipe would not let the microbes generate the heat they do, so it would slow down the composting. In the summer month I think you could leave it uncapped all the time.

I am thinking that I am going to have to wait until spring to get this going. I was a little hopeful that I might get it going, but we really quite a bit of snow. I think it is a good observation about the cold air and the aeration tubes--thanks.

Looks very nice THG...What ya useing for the door?...and in that last oic is that a worm bin (the black stacks?...you allways have great DIY threads...thanks for sharing

You are for sure my hero now. I want one.

I put a handle on today (LOL--PVC primer is so messy). It is pinned and removable. I drilled the axle so that it can be pinned to the flanges. The aeration tubes (1" sch 40 PVC)were drilled out and put through the barrel and also pinned for easy removal and cleaning. I believe that I am going to put a drain on the bottom of the barrel--probably a small PVC ball valve. The door is the only thing remaining. It is going to be a while before I can get this thing going unless I take it to my sis's in the valley. It has been quite easy to put together. 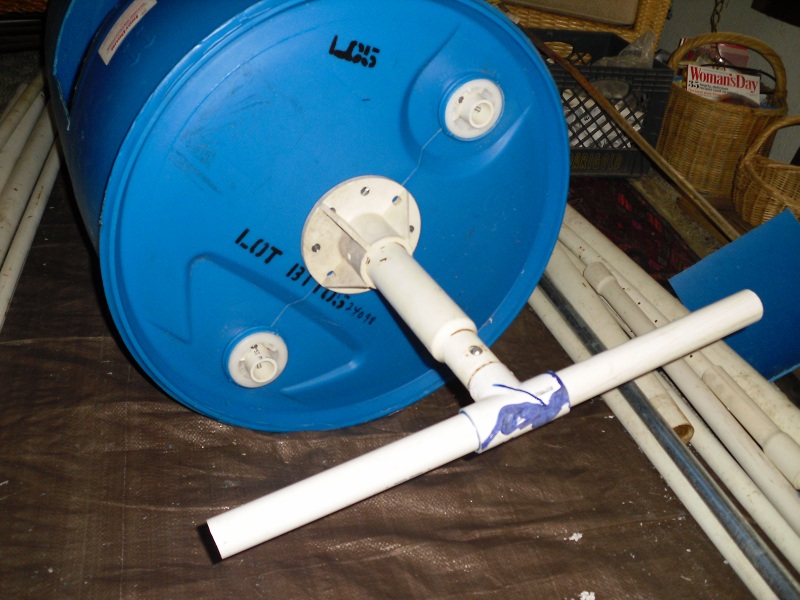 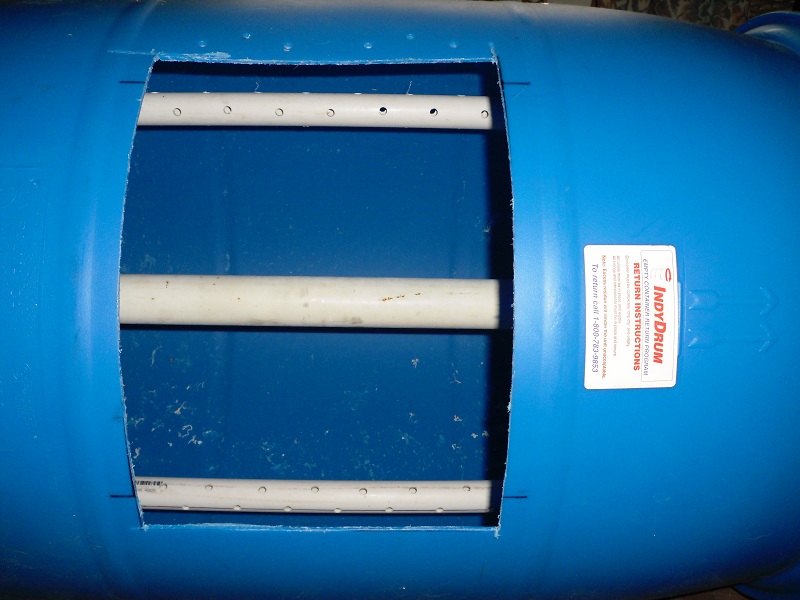 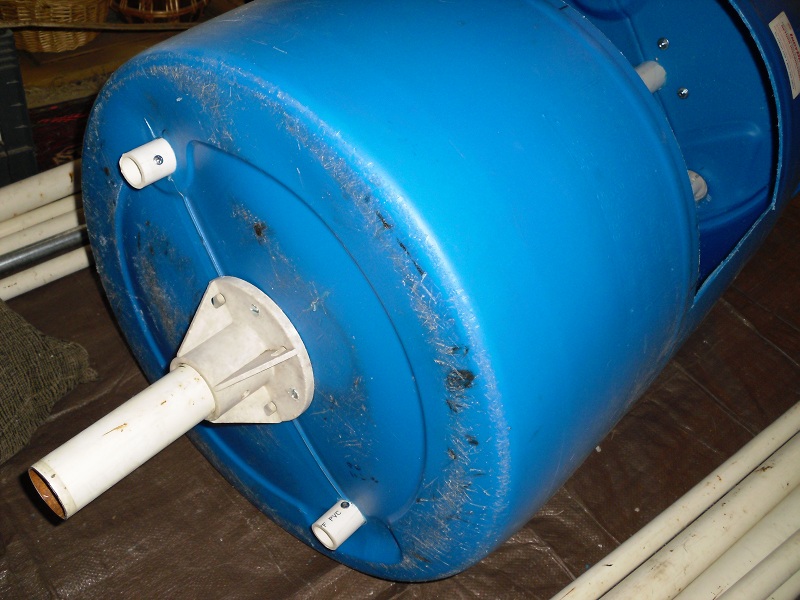 Very clean...Im a book mark this one for fallow up....I vote ...you take to siss

I'll be building one like it soon. Very nicely done THG

Hi THG! Glad to see you getting dirty. Good luck with it.

IMO you'll want to drill a bunch of small (1/4" or less) holes in the sides of the barrel. I don't think the tubes will provide enough aeration and the small holes will also help to add some moisture (from rain) which will help things cook quicker.

When I built my tumbler, i put 4 casters under the barrel to make turning easier- really makes turning much easier- can get tough to turn as it fills up. If you're interested I could do up a quick sketch to show you what I mean.

Things won't happen till ambient temps get to around 55 F.

Thanks BB--I looked at that type of tumblers and decided to go this way. This will be mounted so that I can get my gardening wagon under it to dump finished compost into. I believe that I won't have any trouble turning it with the handle. However, this one is the prototype, so I could well have to make some changes on the next one. I actually worry about rain adding too much moisture. When it rains here, the sky opens up and just dumps. LOL--and then when it doesn't rain the RH is like 21%.

I am probably going to end up building a prototype stand to put it on and put it into my outdoor shed and try to get a jump on things until I can get it outside in the spring. We won't have 55 degree temps until March sometime, most likely.

BBFan, after giving it some more thought....I bought some furniture (mover) dollies and am going to experiment with them a bit for ideas on rollers. I found it was cheaper to buy the dollies than just buy casters. I'll just JB weld them to keep them from swiveling.
You must log in or register to reply here.
Share:
Facebook Twitter Reddit Pinterest Tumblr WhatsApp Email Link