My plant is outgrowing my room height. What do I do? I only have four inches left? I figure tomorrow at noon. I am 2.5 weeks into flowering. I am guessing I veg it too tall...30 inches. Anyways any ideas. Here is an updated pic of my little mutant. Her younger pics were all removed for gps, but she has come a long way. 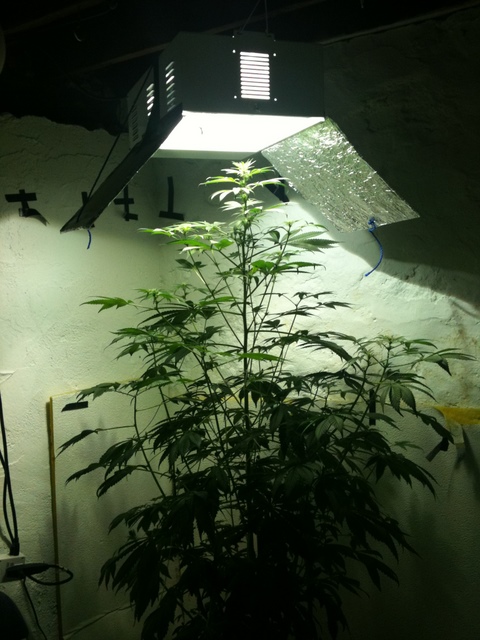 What size light do you have.

its under lit, internodal gap is big.

your gonna have to bend her over.

they can double or triple in flower so if you dont have multiple lights, 30 inchs is way to much veg.

You need a little bondage..Can u get an adjustable shower curtin rod in there?

your gonna have to bend her over.
Click to expand...

take some string and gently pull her down a little every day for a week or more...I use coffee cup hooks tristed into the Wood wall...not sure if your walls are wood..But this I think is best option...Now ya know ya have to throw that strain in earlier..But Learn how to LST (Low Stress Training)

take care and be safe:bolt::bong:

I would reccomend a mix of supercropping and LST. Do a little googling on supercropping, you basically pinch the stalk at the place where you want to bend, I like to rub it between my fingers a bit to warm it up, they pinch easier and bend easier without snapping this way. You pinch and bend at the same time, being careful not to snap her, she will basically lay over at the pinch 90 degrees, then I would tie that down (they tend to pick themselves right back up until they rebound and form a knot where you bend them. I would then look at LST the rest of her branches.

I actually think you will do quite well this way and if you do it right you can keep her to where she'll max out at about the height she is now at finish. I'm going to hop back and take a look at the pic again and tell you which node I would choose to super crop at then edit this post.

edit: looked at the pic again. I would do a super crop a little more than a foot down from the top and tied that down. Then I would take the surrounding branches and LST those out to the sides. It doesn't look like you have a very intense light, maybe the pic is decieving, but it looks really dark down low. You could also prune some of those low stretchy branches off as they won't produce enough to warrant the energy they are taking away from the rest of the plant that is getting good light. Your n ot too far in to flower to prune or supercrop so I would do that now and try to reign her back into control.

Do a little googling on supercropping,
Click to expand...

no need for google on this site...lots of great stuff in the resources Page

Used Iphone and had to take wierd angle to get shot that wasn't all glare. Lighting is fine Ordered second light May 10 from GCHYDRO.com still waiting. Pulled top to side. Supercropping sounds scary. First grow. Just did it on a fluke.

4u2sm0ke said:
no need for google on this site...lots of great stuff in the resources Page :aok:
Click to expand...

This forum has the worst "search" i have ever seen. I can't imagine what u r talking about. Finding anything is search here go to Google and get actual info from another site.
L

In the future top and or train your plants in veg....not sure what type of light you vegged with but HO T5's tend to give tighter growth and less stretch. Your plant looks like at some point it was under lit....all you can do now is bend her over a lil more each day. Good luck....
D

I agree as well dman....one look at that pic and you can see that plant cld use more light

What size is your grow space and how many lumens are you kicking around in there GG?

Get more light or make your grow room smaller:aok:
and is that aluminum foil that you are using for a reflector?

This forum has the worst "search" i have ever seen. I can't imagine what u r talking about. Finding anything is search here go to Google and get actual info from another site.
Click to expand...

We have a wonderful resource page maybe just an operator error is occurring:confused2:

Wow great comments. Running a 400 Halide been trying to get a second but ...don't even want to get into it. Again first plant, I'm just happy it lived and was female. I'm going to play with some of your ideas and hope I don't kill her.
You must log in or register to reply here.
Share:
Facebook Twitter Reddit Pinterest Tumblr WhatsApp Email Link