My favorite plant turned purple overnight. Why? Here are some pics please let me know if this is normal. Her sister died young and turned purple before she was harvested. Is this a sign of death? Is she telling me it is time to harvest? She has been fed with just tap water and rain. She lives in MG. She still seems pretty healthy except she isn't bright green anymore. Any comments or advise is greatly appreciated. 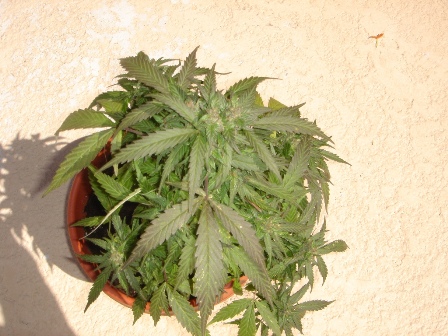 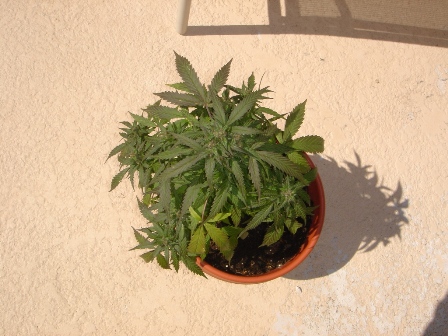 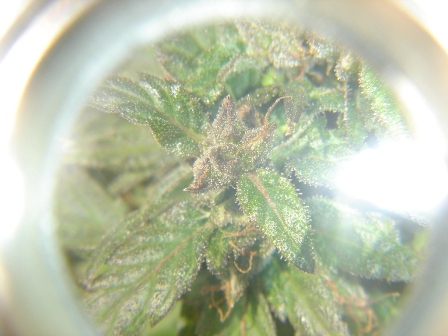 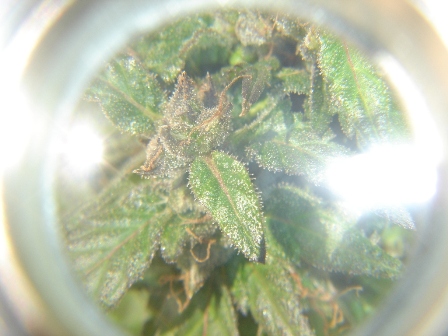 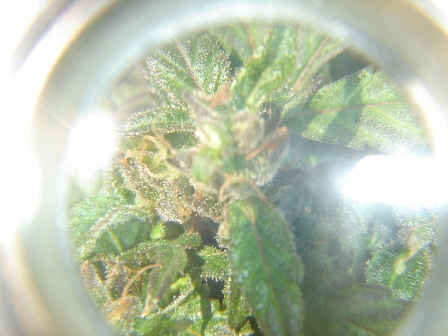 Do you grow her outside?

Purple colors could be caused by low temps at night(or lights off). You're plant looks healthy so i'd say thats what happened...got cold at night.
M

She is Grown at outdoors. -- thanks DLtoker.

Bombbudpuffa--
Thank you. We did in fact get a cold snap the night before I noticed the color change. This is definitely the reason why I decided to post on this forum.

Q: how long after the temps have gone back to normal does it take for the plant to respond, or go green?

Thanks again. If you have time check out my other question here: http://www.marijuanapassion.com/forum/showthread.php?t=9816

Uh...I don't think they change back to green. The purple won't hurt anything, to my understanding.

what strain is that ??
look very normal to me , but check with Hick he nows about outdoors
S

Some strains have a tendency to do this when temps. get low. If it's otherwise healthy I wouldn't worry.

Looks nice and funky to me.

Damages typically don't fix themselves... only the new growth will be better.
G

Outdoors many strains of Indica and fewer of Sativa will turn a purple color when the temperature drops below 55F. This can literally occur overnight, however it usually takes a few days. This is also a good indicator that its time to harvest. Cold weather can cause rapid deterioration of thc and cananaboids, the resin glands (trichromes) can become brittle and break off more easily. Also cold weather causes chemical breakdown of these structures (as does excessively hot weather).

Purple stems can be a sign of magnesium and calcium deficiency.

A new product is being marketed in the US formerly known as "Stacker" now as "Purple Maxx" by the people who brought us Gravity and Bush Master. This is carefully hinted but not guaranteed to cause color change to purple on many strains, if used foliar (2 ml / G H2O) starting 3 weeks before harvest and adding to reservior (no air stone) with a reduced level of nutrients (EC around 1.2 or so if used in last 3 weeks, if used last week just H2O is reccomended, so its like a flush / resin booster). I talked to the staff who makes it and they say it adds "more crystally appearance and increased resin production with associated increases in both medicinal levels and increased flavor without harsh chemical taste and greater weight levels."

Im certain its just synchronicity that "purple" has become the most over-rated and over-hyped flavor of the month (thanks to MtV and Snoop, et. al). I know people who simply use the same strains they always used but during the 12 off they plug in two or more air conditioners in the grow room to reduce temp below 55F for 3 days resulting in "the KILLER PURPLE" and a price increase of roughly 30% doing NOTHING different, same nutes, same lights, same strains, same curing process, they just lower the temp and can take advantage of this ridiculous emphasis on Purple. Now you dont even need to lower the temp. just buy Purple Maxx, $25 for a bottle.

Just a side note on stacker. I've been using that for a while now. While I do not grow a purple strain my trich count has gone through the roof. Seeing that this was the original name for this produce trichomax it's no surprise that this is happening. This product to my knowledge was originally invented to increase the quantity of trichs it was also found out that it gives brighter hues to the plants thus the change of the name to purplemax. This color density doesn't happen to all strains just the purple ones.
G

I have heard only pretty good things about this small company. Apparently its basically one guy started in his 'greenhouse' in Humboldt (or so the story goes) and he really only developed Gravity to increase density of flowers (and weight) because he found that all the crap marketed for that was pretty harsh chemistry (KoolBloom being like 20-45-40 or something ridiculous) and others jumped on that bandwagon (Cha Ching by Foxfarm and their whole strain of flower boosters they make like 4 that are all not organic and are like 35-40-35 minimum) and burn plants at the drop of a hat. So he made Gravity which (if you read the ingredients) is basically just Sea Kelp (ascophyllum Nodosum) which has also been sold by Bio-Bizz under the name "Alg-A-Mic" for around $35 for a 1 liter bottle or 32 oz which makes it about 1/4 the cost of Gravity, and BioBiz is OMRI certified Organic, the Euro-Dutch standard which is the toughest and most accurate and honest organic rating system in the world (try googling the USDA "organic" standards, but not on a full stomach. I called Emerald Triangle / the guys who make Gravity, Purple Maxx and Bushmaster and spoke to a young man (phone USA (866-872-9434) who didnt know that Gravity's only listed active ingredient was the Kelp which was also sold by BioBizz for years prior to Gravity. He was very helpful, as far as he could be, but was no chemical / horticultural engineer. Forest was his name.

Bush Master now has a competitor called Dr Nodes made by the same parent company that makes Sun Master bulbs (MH and HPS). It is also about 1/4 the cost, for which you get a quart ($40 compared to $130 for a gallon of Bushmaster) *however* a quart of Dr Nodes treates over 100 gallons of water. I believe it is 2ml / G in the nutrient solution or soil, rockwool, coir whatever you use, and can be used foliar as well. It stops vertical growth by over 95% within 3 days and the hormone / enzyme acts to focus growth on side branches increasing nodal development by over 50% and overall node growth is closer, greater in number and stretch is eliminated as well so that you dont get that annoying 'nice flowers on top, too bad the bottom 1/3 of the plant isnt getting any light so no flowers down there" syndrome.

As for Purple Maxx, it has non-plantfood ingredients only. This is described as 'organic acids and amino acids'. Everyone I have talked to says it works like a charm, however, and that one great thing about this product line is "MORE IS LITERALLY NOT BETTER" and that generally a half-teaspoon per gallon is the maximum levels needed, beyond that you risk burn and your return on the additional ammount is negligable.

It also appears that Purple Maxx is sort of being marketed as a final rinse / nute buildup cleaner-upper. I am using a bastardized variation of their instructions because I use House & Garden from Holland nutes, and for the last 2 weeks they reccomend reducing nute levels back to the ammount found in the first week after clones are rooted. It prevents the damage caused by using only pure water to rinse with (which shocks plants and causes further damage by dangerously reducing levels of nutes which in turn cause a sort of dehydration (bad analogy but I am tired) in the plants. Instead if you do rinse / whatever before harvest, it is always reccomended to use a very low level of your nutes, roughly 1/6 to 1/8 of what you were using prior to final flushing for taste improvement and chemical salt removal.

Hope this helps, will post some photos of the flowers both "with" Purple Maxx and "without" - same strain, Grand-dad and HP-13 and MK Ultra, so with those variables there should be no problem seeing how the Purple Maxx effected appearances, both color-wise and trichromey sparkly.