PLEASE HELP,I just made clones and they're dieing

Made about 50 cuttings on sunday and they look like shit. I moistened the cubes, cut them with a sterile knife, dipped the clones in clonex and put them in their greenhouse, and watered. What am I doing wrong. If I lose these clones I have to start all over and Im going to cry like a little ***** If I have to do that. PLEASE HELP. 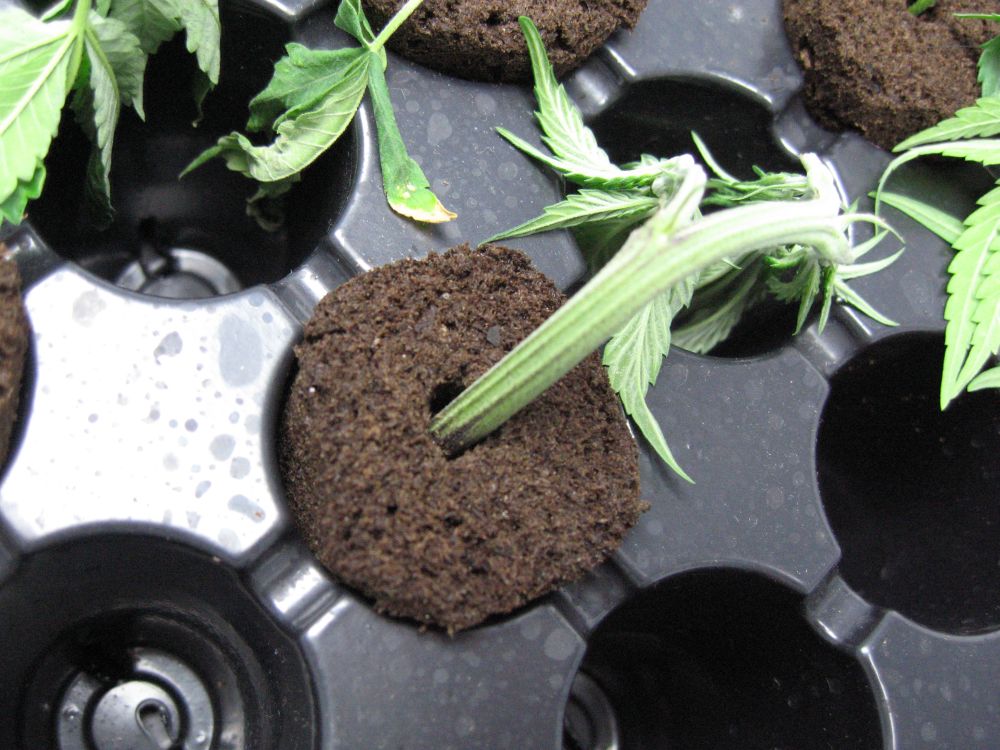 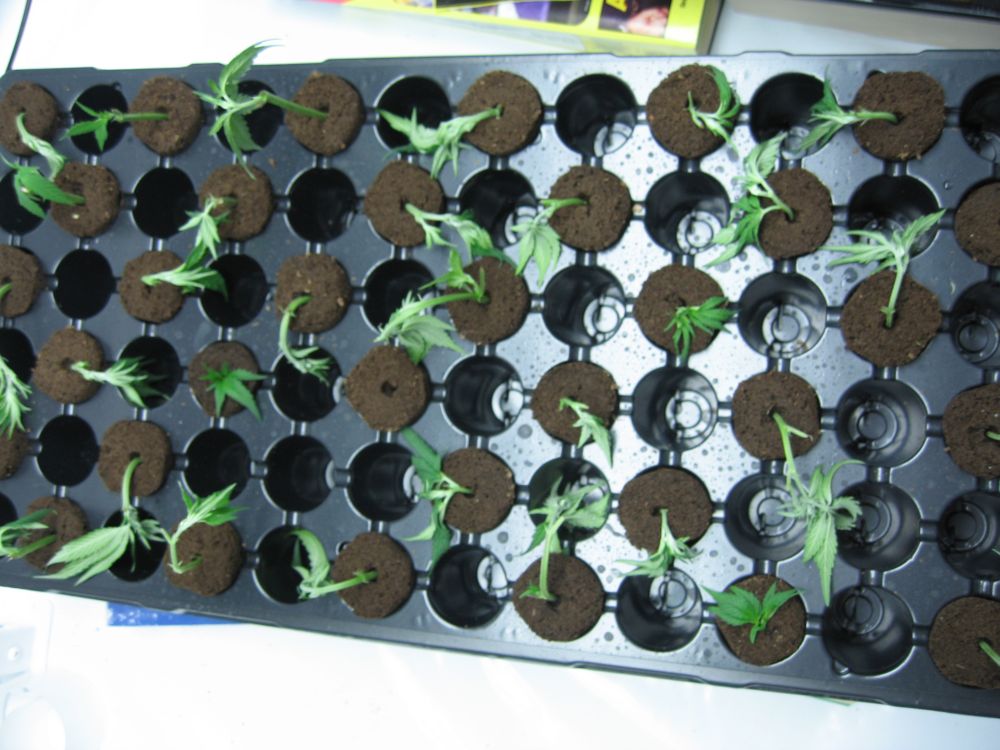 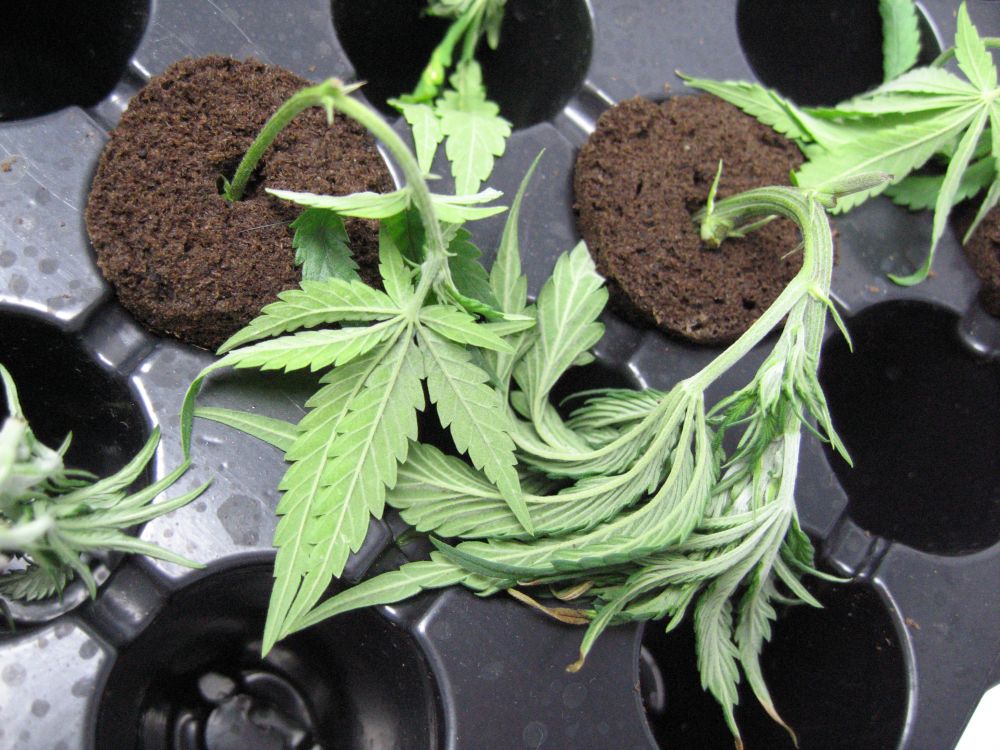 I'm betting that they've had too much sun. Clones need very little light. Take them inside or at least into Indirect light and put a flourescent light over them. About 12 inches away is good.

It may also be heat stress. Getting them inside will solve both.

how many hrs a day, the light is about 2ft, going at about 24hrs day
S

GREENTEAMGROW said:
how many hrs a day, the light is about 2ft, going at about 24hrs day
Click to expand...

What type of light?

They should pick back up in as little as 3 to 4 hours. By tomorrow, they should be fine again.
S

Come into the chat room. It's the blue button at the top of the screen that says "Chat Now!"

Whas up greenteam? Juss wonderin did they ever recover? goodluck man.

Well, I think they're fucked. Im going to go to my growshop today to see if there's anything else I can get. But the only thing I can think of is that my roomie and I werent careful enough when we made the clones and underestimated their sensitivity needs. Thanks stoney bud for walking me through everything yesterday. Worst comes to worst, I will try to make more clones in the next few days. 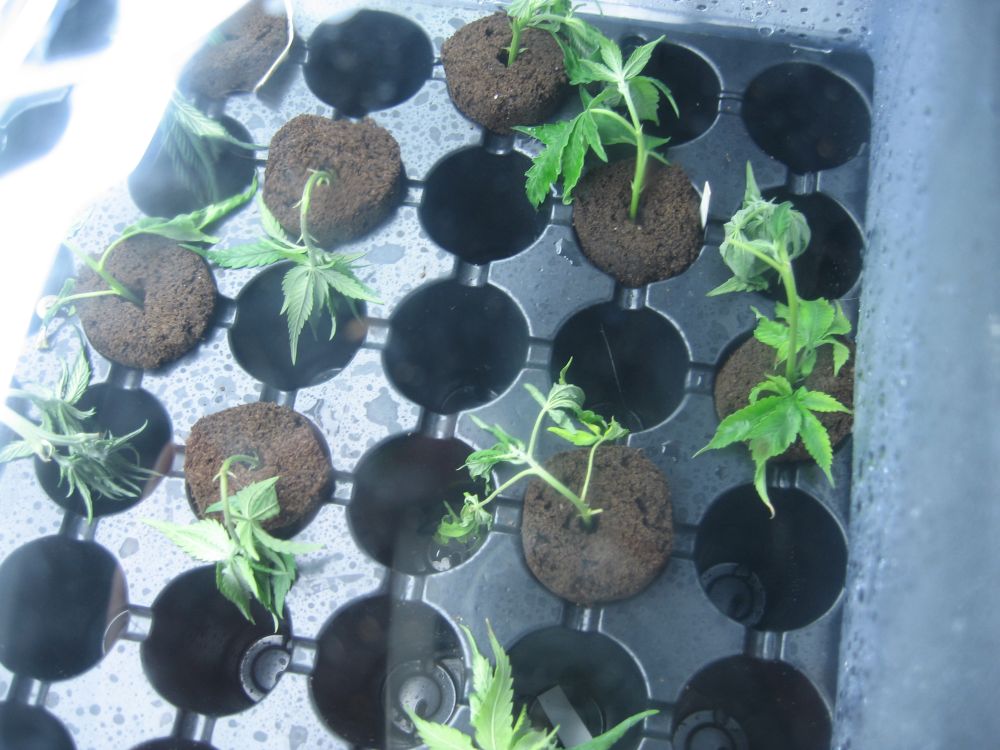 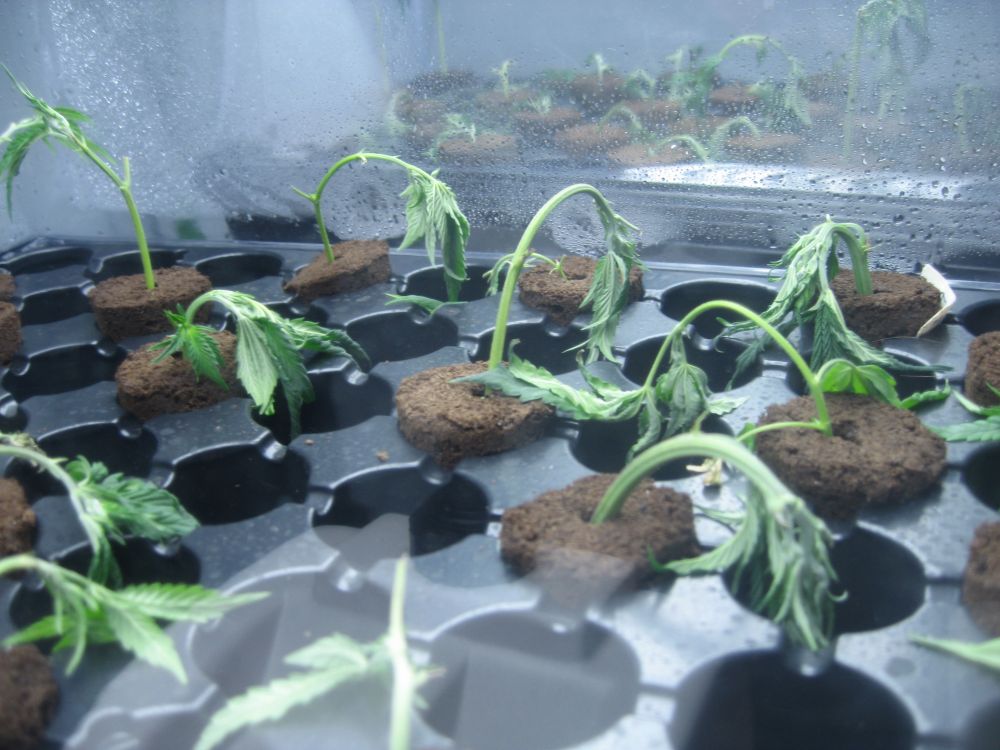 did you mist em a couple of times a day and take the dome off to let em breathe for a little bit and get fresh air?

I take my dome off about 1 hr. 2X a day. and keep it well misted with store bought spring water.

I was told by my growing master to not even crack the opening for at least 6 days because they're too sensitive. I have been misting though.
S

GREENTEAMGROW said:
I was told by my growing master to not even crack the opening for at least 6 days because they're too sensitive. I have been misting though.
Click to expand...

I think I see the problem in your pics.

Those are what I call peat pellets I think. What are they exactly? The hole you've stuck the clone into should be squeezed against the stalks of the clones. I see in some of the pics what seems to be a hole still around the stalk of the clone. If that's the case, then not enough plant material is in contact with the moist, dark, media. No moisture is touching the stalk much and light is hitting it. Resolve both of those problems and your clones will perk back up. They still had good life in them in the last pics.

Wet the pellets good. Gently squeeze the pellets until you've sealed them good around the stem and squeezed out half the water. Set them into the growing spots, wet them real good again and don't touch them again for two days while the dome is shut. They will perk almost immediately. In a matter of a few hours. Your misting is what has been keeping them alive probably.

If I'm right in what I'm seeing.

If you want, just risk two and try it. If they perk, then do the rest.

your knowledge is profound sir, I will follow the ways of the stoneybud. Ill post an update in 48hrs. thanks alot
S

It shouldn't get any warmer than 90 inside that dome. If it does, then the plants are better off in the open air. No fans. No movement of any kind. That's most of the secret. That and plenty of moisture, a good anti-bacterial and a good rooting hormone. Ten to twenty days and you should have viable clones.

Don't mist the clones while they're weak. It hurts more than it helps. The weight of the water on them can hurt them more. After they have perked up real good in a few days, mist them lightly once a day. Give them some fresh air for 10 minutes or so.

Good luck to you man.

Those are soiless organic plugs. I replanted them all. We'll see what happens. You wouldn't happen to know anything about c02 would you.If you do ill be on the chat room, mine keeps leaking gas. Regardless, thanks again. 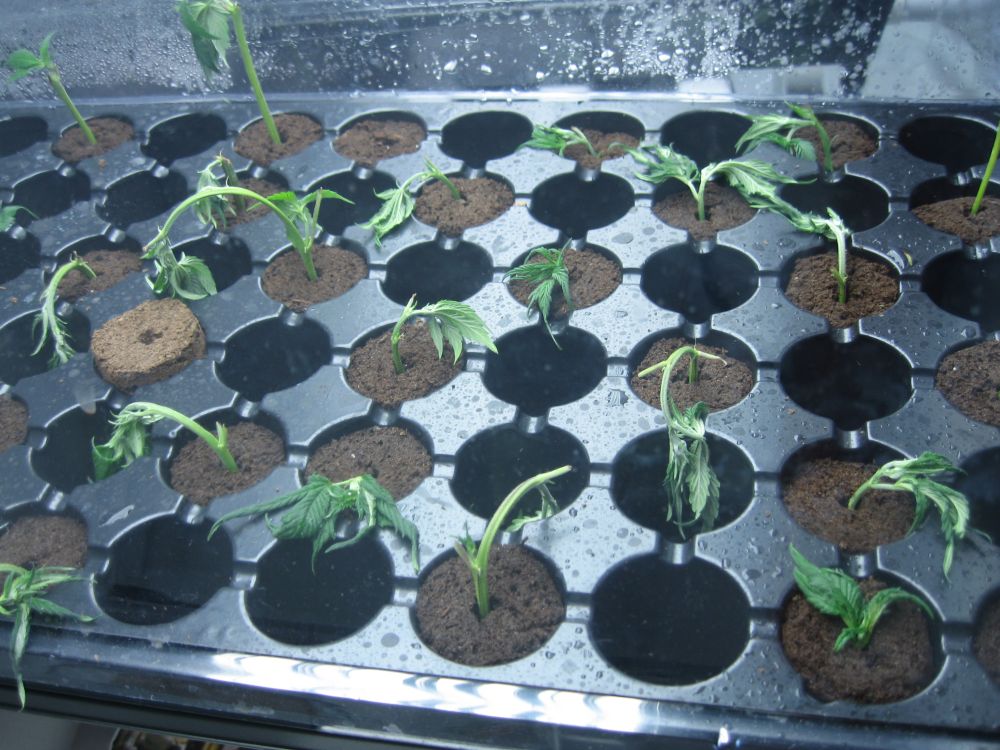 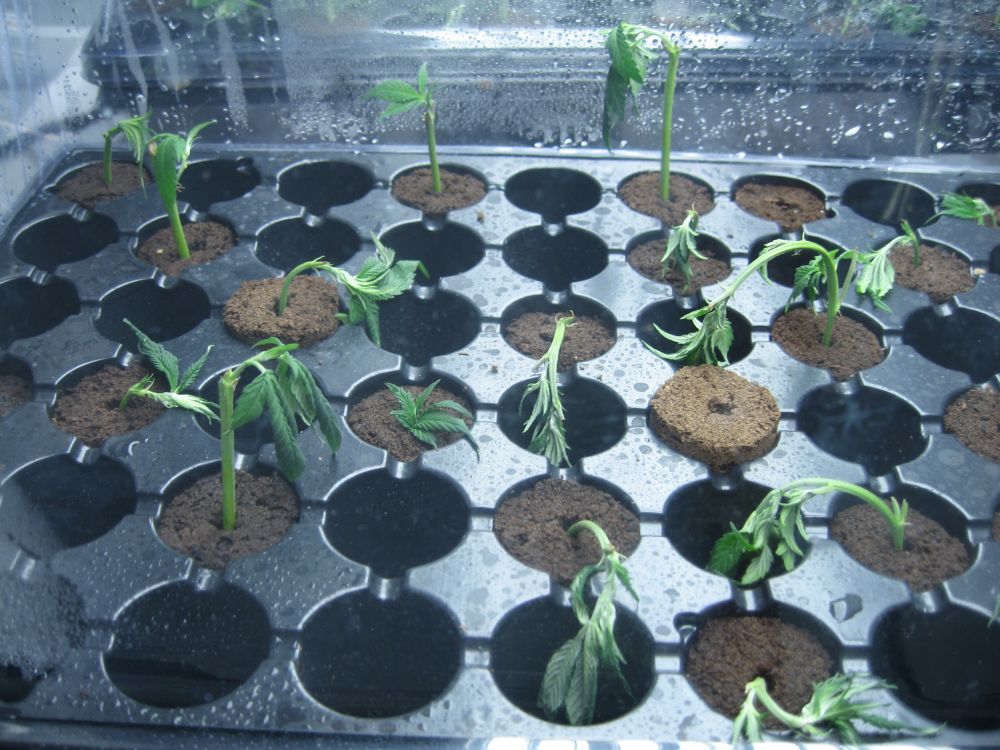 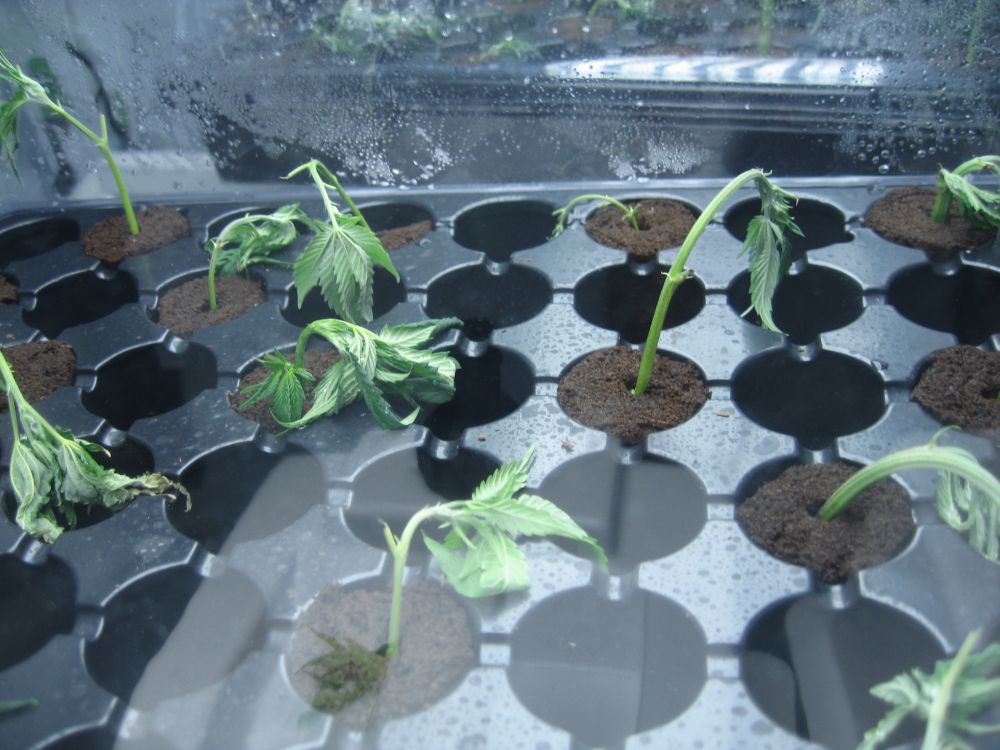 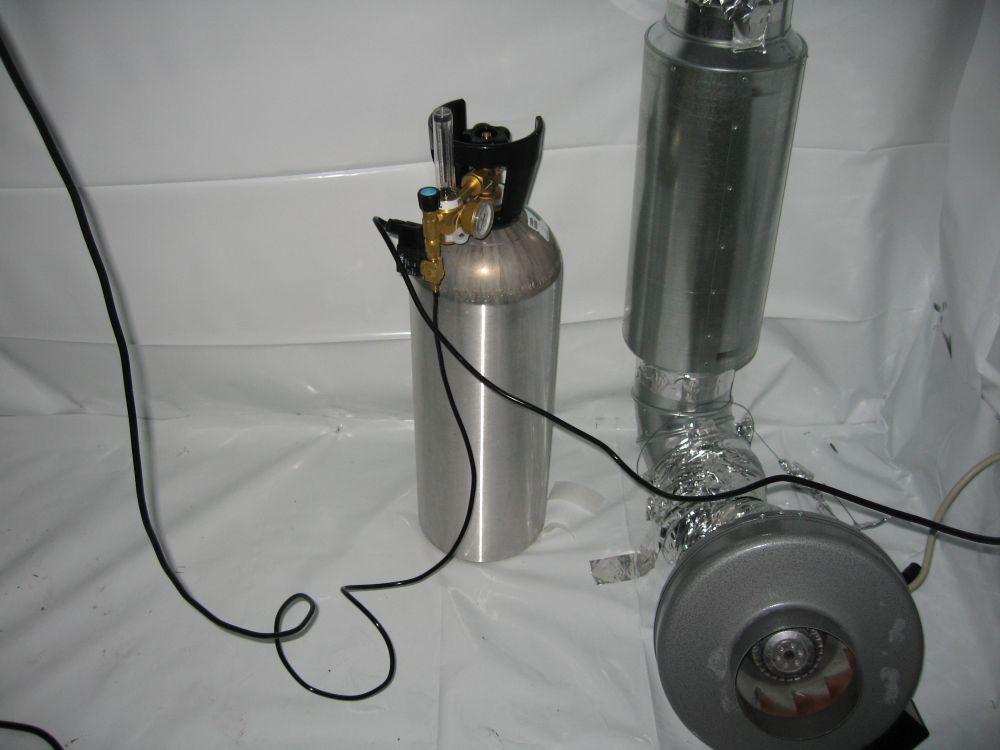 stoney , they're doing alright, we lost a few, but out of 40, who's give's a shite. I posted updated pics on my grow journal, thanks bro
S

GREENTEAMGROW said:
stoney , they're doing alright, we lost a few, but out of 40, who's give's a shite. I posted updated pics on my grow journal, thanks bro
Click to expand...

Man! Am I glad to hear that!

Around 25-30, It actually doesn't even matter now, im about to go over my legal limit anywayz with the seeds im getting in, LOL. Nah, im definetly glad my trainwreck survived, because thats one of the best sativa's Ive ever smoked. Thank you sir!
S

GREENTEAMGROW said:
Around 25-30, It actually doesn't even matter now, im about to go over my legal limit anywayz with the seeds im getting in, LOL. Nah, im definetly glad my trainwreck survived, because thats one of the best sativa's Ive ever smoked. Thank you sir!
Click to expand...

Hahahahaa! Train wreck! Man, it did look pretty rough in those pics. I saw some life in them and I'm glad you could get that many growing good again. You're very welcome for anything I could do to help. I've learned most of my lessons the hard way.

One thing you'll have to look for in the mature plants. Severe stress like that sometimes causes hermies. You'll need to look each of your plants over very well after they get preflowers or you could flower some cuttings as soon as the plants are large enough to take clones from safely. The cuttings would tell you the males anyway. The identification of any hermies would have to be later.

The preflowers on the mature plant are you best indicator after a large stress. A cutting may only show female, where the entire plant may have flowers of both sex.

Good luck to you man, and when you notice preflowers on your plants, look them over well. Hermies can be a real problem in a grow room full of ladies.
C

first off....18 hrs/day for clones. 2nd....should be under a dome for at least a week. keep dome raised by some sticks to create air flow and spray inner dome w/ superthrive at least 2 times/day. Also, a great product i've found is liquid "stim-root". This shit rocks! I'm pulling 48 outta 50 clones
Try this......
You must log in or register to reply here.
Share:
Facebook Twitter Reddit Pinterest Tumblr WhatsApp Email Link