Who all is taking the Covid19 Vax?

patwi said:
He be abit queer
Click to expand...

Sure seems like the more boosters you get the more likely to get sick......Fauci, and the commander in chief are perfect examples.

Zero jabs, zero Covid… that I know of. If I don’t feel sick, am I sick? I think not…

oldfogey8 said:
Zero jabs, zero Covid… that I know of. If I don’t feel sick, am I sick? I think not…
Click to expand...

I bet both of us have had it Fogey we just didn't know it. Some aren't effected by it. And now we don't have to worry about growing a third eye....this is what my next door neighbor looks like. He can't wait until the next booster comes out to see what he looks like then.

^^^no he isn't a hockey player

pute said:
^^^no he isn't a hockey player
Click to expand...

^^^Don't you know Pawti.....everything is covid now. If Tiger would have died in that car crash a year or so ago ..... it would have been a direct result of covid.....nobody is stupid enough to drive like that.

pute said:
I bet both of us have had it Fogey we just didn't know it. Some aren't effected by it. And now we don't have to worry about growing a third eye....this is what my next door neighbor looks like. He can't wait until the next booster comes out to see what he looks like then.

I think I bought her a drink one night at last call, but I think she had one more eye......

Yeah even a Fking sinus infection is Covid now. That god damn test is full of shit. I bet you that mother fker was made to pick up any protein Cold Related and call it Covid. Lying assholes.

Pretty sure my 24 year old son has the ‘Vid. He has told me he hasn’t gotten the jab but he knows my thoughts on the jab so he may just be avoiding friction. He works at a Y here where the jab and mask mandates are heavily pushed and interacts with a lot of people daily. He came home early from work the other day and said he just couldn’t get any work done allegedly because too many people need his help there. Holed up in his room that night. Coughing up a lung all night. The next day he could barely get out of bed. He hasn’t been sick in years and is healthy and strong which is why I think he got the jab and it has compromised his bodies ability to fight infection. We have given him ivermectin, hydroxychloroquine, zinc and vitamin D. We will see how he is today. Hasn’t been coughing so that is a good sign… FAF.
P 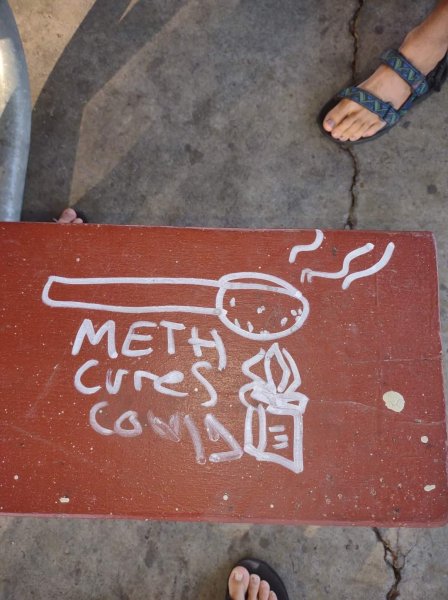 Yep Meth cures dumbasses from living to long too. And you won't need a dentist because you will loose your teeth all by yourself.

Fentanyl can cure it as well

RosterMan said:
So does a 45 cal to the head
Click to expand...

Wasn't the CDC reporting COVID deaths with that very injury not long ago??
P

So what am I good friends works for the state like I told you in a previous post I don't know I don't know who reads the post that I put up so I apologize if this sounds really vague or out of a Twilight Zone episode to some of you I was mentioning in an earlier thread a couple of days ago that I had a friend that started to work for the state ironically loves this plant just as much of all of us do it's just hard seeing somebody that was a gorilla like me pumping out what we were pumping out coming full circle and working for the state assuming that people are going to be on the up and up and that it's going to be legit but they are giving him $100,000 a year to run the Cannabis control board so I see that and I understand why I think it was last year he got the backs both boosters almost killed him had three people that were very close family members of mine that are 15 years my senior all tell me they wouldn't come anywhere around me or anywhere near me because I refuse to get the vaccination, my rationalization for not wanting the vaccine was that I did not trust the people that were pushing it. End of story for me. As much as Big Sur ragged on me for my ongoing rambling tangential vernacular when I'm posting here 1/3 of it is due to the fact that I'm using a microphone and I sometimes get lazy and don't go back and proofread all of my postings the second part of it is that I have a head injury and I'm prone to tangential talking it doesn't mean that what I'm saying is wrong or outlandish it's not that acute I just I'll start talking and I'll just go and I apologize if that's overwhelming to some of you cuz it's not meant to be disruptive in any way, it's just something I deal with on a daily basis.
I now look at these people one of which is still alive and ask myself how are people that like have college degrees gone through the red tape b******* for 20-30 years so easily led into a job that they know nothing about it scares me and then I look back in history at all the people that were brainwashed and sent to do s*** that they may not have they may or may not I just human beings in some regards are way too f****** gullible and that terrifies me the most out of everything is how gullible people can be and that they be willing to take their family and their own health and just roll the f****** dice like that I wonder what's worse with your life the vaccine or fentanyl? And now they're talking about monkey pox and all of that so just don't us older dudes that had chickenpox when we were kids that have to deal with shingles later in life the Opera the opportunity for shingles to come back tenfold I guess when you're later in life it's a lot worse last thing we need to deal with over here is f****** monkey pox my gosh.
You must log in or register to reply here.

R
Who here has had The Covid Virus already?
2 3