been angry & depressed all day

"so i don't know the ins and outs of this, but if this passes, i'm going to break the law on principle alone... hitler used genocide, africa has had genocidal wars... and everyone is up in arms about about the evil of it... how much less a breed of dog, "man's best freind", that if poorly trained or abused becomes temperamental... serial killers are often abused growing up, and we hold them, as individuals, not the whole human race, accountable... pitbulls are not human-aggressive by nature, it takes improper training, aggressive training for them to be people-eating-monsters... who the F is the government OF DEMOCRACY!!! to tell you that you dog isn't fit to live because someone else can't keep a leash on theirs... i'm angry about this one...

a California legislation being passed to exterminate all pitbulls. If it passes in California it will pass just spread."
-girl I know who wishes to stay anonymous


I own 2 pitbulls myself and they would never hurt anyone unless my fiance was being attacked as they are very protective over her. We need to find a way to stop this.

i agree, my pit is only aggressive towards others only if they try to hurt me. 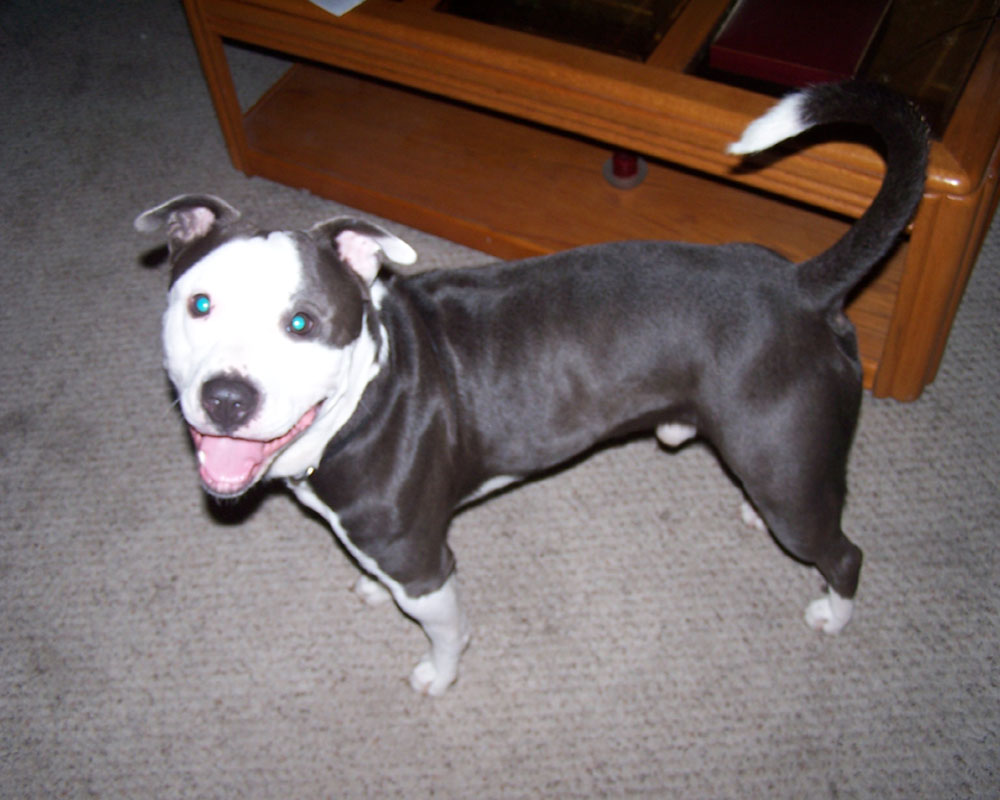 beautiful dog you got there.
G

thankx, i would be pissed if they tried that crap in my state!!!

here in canada our laws are based on the actual actions of a pet.... a report is made of a dog attacking someone and this is filed....i do believe that the animal owners get 2 or 3 warnings before the pet will be put to sleep

I just dont understand how they can stereotype a whole breed. Then again that aspect of the US Government is horrible, just look at the stereotype they created for pot smokers. I love my dogs and nothing makes me happier than having them rest their big heads on my chest asking to be petted. I dont live in California, but I see it taking effect here if it passes there.

I own a 1/2 pit 1/2 boxer breed. The breeder I got mine from said that by mixing the two breeds it makes a mellower dog. (I'll have to agree lazy ass mutt. )
but I have to say he is a mixed breed and not specify the mix O'wise my homeowners will not cover him.
I feel for you man. Pits and Boxers have such a bad rep. because of improper handling and care. While most are actually very good dogs.
W

The goverment dosent see it as the owners fault but the dogs when its not. On my street these people just let there pit bull walk around. It got into a fight with another dog one day and the owners still let it out. Its funny tho the dog is scared of my cat but it will fight a different pit

People definetly prejudge them, but I've never heard of an innocent dog gettin put down. But if a pitbull does attack someone and is dangerous, what can you do with it?? Lock it up for the rest of its life, or put it
down?
You must log in or register to reply here.
Share:
Facebook Twitter Reddit Pinterest Tumblr WhatsApp Email Link