Sept 22 2005
UP
Washington insiders were shocked to-day when President Bush, during a press conference to discuss terrorism and disaster relief for gulf coast states suddenly broke into a rousing rendition of "Tomorrow" from the hit broadway musical Annie (see photo).
As soon as he was finished he was quickly whisked off stage by Secret Service agents dressed in white coats, with nets, while thunderous applause was heard from 6 Republicans and a janitor named Earl.
Earlier, Bush claimed Osama Bin-laden was responsible for Hurricane Katrina and therefore we must bomb Paraguay "back into the stone age" to keep Americans safe from terrorist hurricanes and to preserve democracy in the People's Republic Of Santa Monica California. 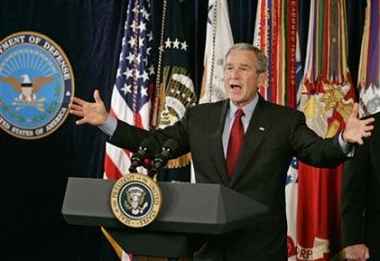 Yes He Needs To Go, But Think About It. He Would Only Be Replaced By A Carbon Copy In A Different Suit.

Here's the thing, Gange... I can't figure out if you are kidding or not. This story is believable, given who it is we're talkin' about.