'No toking' signs for cannabis crackdown banned in Amsterdam

Introduced in 2007 as part of a crackdown on marijuana-smoking youth, the unusual signs proved to be a hit among tourists.

The signs  which portray a cannabis joint, with little marijuana leaves in the background  were stolen so often the city eventually decided to sell them for £80 each through its own merchandise line, but they will soon have to be taken down.

Although possession of small amounts of cannabis is allowed  and the drug is sold openly in designated shops  marijuana is theoretically illegal in the Netherlands.

In light of this, the Dutch governments top legal adviser has ruled that the city cannot outlaw cannabis smoking in certain areas as it replicates the existing ban.

City spokeswoman Irish Reshef conceded that the ruling probably means the signs will have to go, but said they will still be able to find young smokers causing problems. 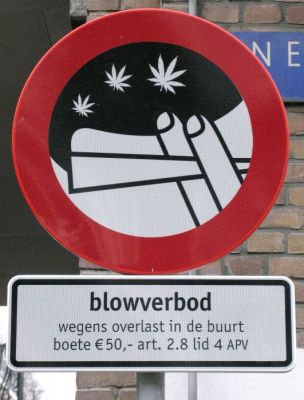