[FONT=&quot]ChiefChaz, is a Retired 15 year decorated former Texas Peace Officer. During his 15 year tenure he served in many aspects of Law Enforcement; Police Officer, Police Corporal, Police Sergeant, Field Training Officer, Police Instructor, S.W.A.T. Operator, Criminal Investigator, Accident Investigator, K9 unit, K9 trainer, Undercover Narcotics and narcotics interdiction. Chief has received many awards in the past. He has been Officer of the year twice, received a Governors recognition award for Texas Governor Rick Perry, Lifesaving award, above and beyond the call of duty award, safe driving award and had received the expert marksman pin for expert law enforcement marksmanship with 4 different hand guns, as well as the AR-15 assault rifle. Chief is also a graduate of the Bill Blackwood Institute at Sam Houston State University, Police Chief Development Program and the Police Chief Leadership series, two schools mandated for all police chiefs in the State of Texas. In his 15 year career working patrol, accident investigations and serving as a Board member on the Tarrant County Narcotics Task Force Governors Board, Chief had noticed the lack of accidents, death, domestic violence, assaults and many other crimes that according to our government a percentage of them were being caused by Marijuana use. The more chief researched the criminal history statistics, and government documentation for the illegalization of Marijuana, he found that the real reason for the government&#8217;s prohibition of marijuana was actually based on lies, propaganda, political gain as well as defaming and belittling minority races. Chief then began researching the medicinal aspect of marijuana, speaking with several veteran physicians, surgeons, nurses and caregivers. Chief found that the benefit of marijuana for medicinal use is not a myth, in fact Chief learned that it&#8217;s a valuable medicine for those who suffer from many diseases such as; Cancer, AIDS, Crones Disease, Multiple Sclerosis, severe anxiety, severe migraines, severe arthritis etc.Chief is now retired and is an activist for civil rights and the legalization of marijuana. Check out xxx.ChiefChaz.com
[/FONT] 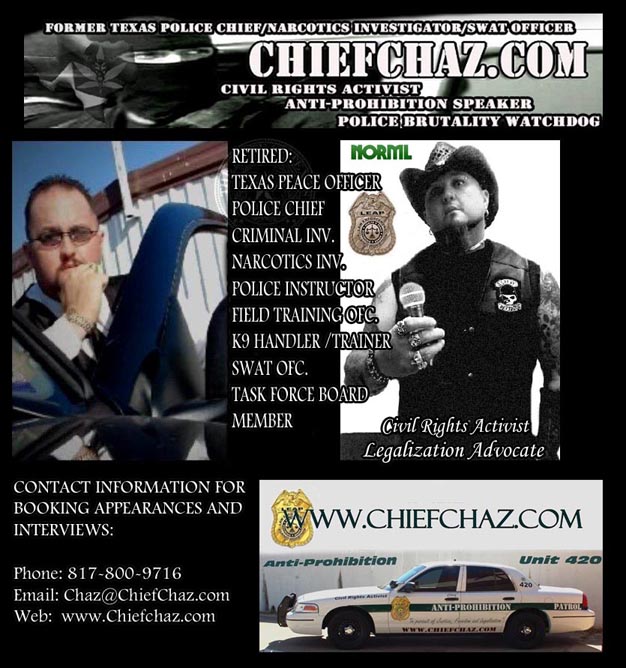 Is Chief a stoner also ? :welcome: