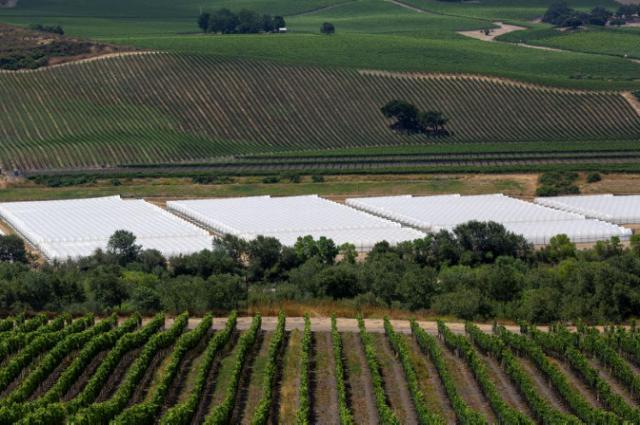 The white plastic greenhouses of a cannabis-growing operation built in March are seen between the Fiddlestix (top) and Sea Smoke (bottom) vineyards in the Santa Ynez Valley northwest of Santa Barbara, California on August 6, 2019 (AFP Photo/DAVID MCNEW)

Lompoc (United States) (AFP) - A bitter war has erupted between pot growers and vintners in one of California's famed wine regions where cannabis farms are proliferating, leading critics to denounce a "green rush" they fear could prove disastrous.

The battle, which began shaping up after California voters legalized recreational marijuana in November 2016, has pitted wine growers in Santa Barbara County and residents of the picturesque beach town of Carpinteria against a new neighbor they say literally stinks and threatens their livelihood and way of life.

"I think this is the single greatest threat to the wine industry that I have seen in my 25 years here," said Stephen Janes, general manager at Pence Vineyards, located in the Santa Rita Hills.

At issue is the vast expansion of the cannabis market in the county in the last two years, thanks partly to loose licensing regulations at the local level that opened the door to a rush of growers keen to cash in on the lucrative crop.

Almost overnight, critics say, millions of flowering cannabis plants popped up in the Santa Ynez and Santa Maria valleys, a vast wine-growing area made famous internationally by the movie "Sideways."

Further south in Carpinteria, greenhouses once used to grow flowers and located near residential areas have been repurposed to grow weed, much to the chagrin of some local residents irate over the pungent and pervasive odor that emanates from the plants.

"I have to wear a mask now when I go out to my garden, and my grandchildren won't visit anymore because of the smell," sighed Joan Esposito, who has lived in the town for 36 years.

In the Santa Rita Hills area, known for its Pinot Noir production and located about two hours north of Los Angeles, white plastic hoop houses for pot growing extend in places as far as the eye can see and sit near vineyards and avocado farms.

"It's not like any farming neighbor we've ever had, and this is all happening very quickly," said Kathy Joseph, owner of Fiddlehead Cellars and Fiddlestix Vineyard. "No one anticipated the visual impact, nobody in the region had ever experienced cannabis in this quantity.

"In many ways, cannabis is ruling the roost right now."

Vintners, avocado growers and other farmers say they are having to adapt their farming practices -- including by using organic pesticides often less effective than conventional ones -- lest the newcomers sue them for inadvertently contaminating their high-value crop.

Wine growers add that they, in turn, fear that their grapes could be contaminated by particles from pot plants.

"This has turned into a living nightmare," said Joseph, whose neighbor has filed a complaint against her over fears that the pesticides she uses on her vines may have contaminated his cannabis.

"I have committed over 40 years to making wine ... and as wine growers we operate under strict controls," she added. "But this year, I am probably going to lose my crop of Chardonnay, worth $50,000, because I had to switch to a pesticide that was not as effective for mildew."

The cannabis association that represents pot farmers in the area did not respond to AFP requests for comment.

Members of the Santa Barbara County Board of Supervisors, which is responsible for setting policies on cannabis, acknowledged that the county should have anticipated the unintended consequences of pot farms on existing agriculture and residents in the region.

"I am very concerned about the impacts of outdoor cannabis operations concentrated in the Santa Ynez Valley and am working vigorously to protect existing vineyards and agricultural operations from the negative impacts of this new industry," said board member Joan Hartmann.

She said the county had limited cannabis cultivation in the region to under 2,000 acres (800 hectares) and was exploring ways to defuse the escalating conflict.

Graham Farrar, CEO of Glass House Farms in Carpinteria and president of the local Cannabis Association for Responsible Producers, said pot growers have gone out of their way to be good neighbors, installing odor control systems and injecting much-needed tax dollars into the community.

He also dismissed complaints about odor, saying that while there may still be an occasional whiff of the skunk-like smell, it was hardly overwhelming.

"I think that many of the people who talk about the odor don't like it because it reminds them that there is cannabis growing there and they think cannabis is a moral failing and society would be better without it," Farrar said.

His argument, however, doesn't sit well with everyone.

"For an industry that has been here for 40-45 years ... and contributes $1.8 billion to the local economy, to have another industry come in and cause us to change our ways, affect our grape growing, I don't think is right or fair," Janes said.

He said he and other vintners were not opposed to marijuana but are pushing for stricter controls to preserve their livelihood and not have the smell of cannabis compete with the aroma of wine in tasting rooms.

Some locals, like Maureen Foley Claffey, are not waiting to see how the conflict plays out. She is packing her bags and moving her family out of the Carpinteria neighborhood where she grew up.

"It's like having 500 liquor stores within three blocks," she said, referring to the pot farms.

"This has pitted neighbor against neighbor, and I have lost friends over this," Claffey said.

The thing I ffind most interesting about this article is that cannabis growers are limited to organic pesticides, but growers of other things we imbibe are not limited to this....why? Why is it okay to spray other ingestables with poisons?

1st thing that caught my eye too.
U

In the wine industry, it is regulated by the FDA as it is considered food. The production of wine is required to meet FDA and GMP manufacturing processes. It is exceedingly strict.
T

Two things regarding Cannabis is that it's not easily washed, grapes can be ( Most Pesticides are water soluble) and certain pesticides
change when burned. ( Myclobutanil can convert to Hydrogen Cyanide, prohibited in most countries, but not in the US). Also pesticide drift from non organics can be an issue.

Doh! And nobody mentions that CA grows tens of millions of tons of pot than it could ever ingest itself. Because everyone is growing huge out there due to the seemingly limitless personal production. And where do you think these overages wind up? I can't remember exactly how much, but I heard that 68 million pounds of surplus is exported to other states from CA alone. Which in turn completely crashes the market in the other states. What a screwed up situation. States have sued legal states for not controlling this crap. All states that have legalized cannabis are doing the same thing. It seems like the feds know exactly what's going on, but are just turning their head, and allowing it to continue. Doesn't that make you wonder why?

I dont like anything but black market. I support the little guy and always will.
Dont need the bullshit that comes with weed being legal unless the Gov stays out of it

Uncle Sugar keep his nose out of everyone's business???

WeedHopper said:
I dont like anything but black market. I support the little guy and always will.
Dont need the bullshit that comes with weed being legal unless the Gov stays out of it
Click to expand...

I agree wholeheartedly! It's been legal in my state since Dec 2017. I live in a very progressive college city, and there is still zero dispensaries open in this town. Legalization has done nothing for me. It hasn't changed my life one iota. It's just business as usual. Our governor even made it legal for caregivers with the medical program to be able to sell overages to dispensaries. Because the swag the giant licensed recreational growers were growing was so bad, and prices were way too high. Boy you wanna talk about a bunch of pissed off 1%ers! They spent millions on licensing, warehouses, and equipment, and nobody wants their shit! I love it! Black market rules here still.

Exactly. I live in Texas and have been smoking and growing personal for many yrs. I dont want nor need weed to become legal where the freaking industry takes over and kills the small black market dealers,,who by the way, grow some killer Dank.
Kinda like Walmart and Amazon has destroyed so many mom and pop stores and businesses,,which screwed Them and their children's future.And those asshats could give two shits. Some people will elect morons just because they are for legal weed. Look what has happen to California. 1000s of pounds of weed and nobody to buy it because the market has been saturated.
If they want to make it legal,,make it legal only to grow your own personal weed and sale your overages to ppl who cant or dont want to grow. Not to sale to dispensaries who have to tax your ass to sale it.
Last edited: Aug 31, 2020
You must log in or register to reply here.