How Will Small Marijuana Growers Stay Competitive if California Legalizes It?

How Will Small Marijuana Growers Stay Competitive if California Legalizes It?

For decades, small growers in Humboldt County have made a living cultivating and selling cannabis. But over the last 10 years or so, outsiders have been pouring in to the region trying to cash in on the green rush for commercial cannabis.

The medical marijuana industry has certainly sparked a cannabis boon, but if Californians vote for Proposition 64 and allow adults to smoke cannabis purely for recreation, it will be a game changer for the industry.

Its not hard to find local farmers who worry that larger corporations will eventually squeeze out their smaller operations.

Farmers like Chrystal Ortiz-Beck and her husband, Noah Beck. Chrystal and Noah currently cultivate medical marijuana for dispensaries. Their farm, or grow, as it is known around here, is in Holmes, an unincorporated town right off Highway 101.


Holmes is a remote and rugged place. The South Fork of the Eel River drifts through the valley in which the tiny town sits. Its sparsely populated and laced with redwood trees.

Like in much of Humboldt County, marijuana cultivation has replaced logging as the main livelihood. Chrystal says most of the people here have grown marijuana for decades. But theyve hidden it. And for good reason.

Chrystal is a second-generation grower and says pot farmers used to live a much more fearful existence. She starts to tell me about her family, who lived in Mendocino County. But she stops herself before getting into the details. Growers from her parents generation still dont like to talk about their business. All she will say is that her familys operation was raided. 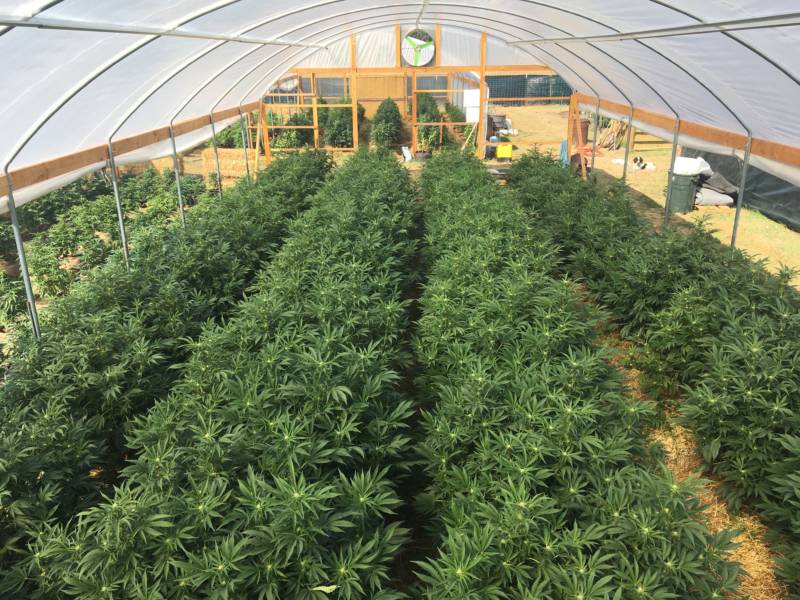 
Up until a few months ago, Chrystal wouldnt have been so public about her marijuana grow either. She wouldnt have cultivated plants out in the open and she definitely wouldnt have invited an outsider like me to visit the farm. But times have changed.

Were moving into the full sun, Chrystal says, out of the trees and out of the shadows and into full sun.

Today, Chrystal isnt shy about showing me her farm. As we walk through the greenhouses, she points out the different cannabis strains, with names like OG Kush, Girl Scout Cookies and Blue Dream.

Chrystal and Noahs farm is small, less than an acre and fenced off from the road. The couple obtained permits from the county to grow legally under regulations Humboldt County established last February.

These permits are a big deal in Humboldt County. Over 300 growers have signed up for them.

Chrystal says that while young growers are embracing the new openness, the old-time growers are still suspicious. She says they remember the pot wars in the 80s when law enforcement ripped up plants and put people behind bars.

Chrystal Ortiz-Beck believes there will always be a market for high-grade organic cannabis. (Sam Harnett/KQED)

Chrystal says many older growers actually oppose Proposition 64, fearing it will bring costly regulations. And, if larger corporations eventually get into the business, the farmers worry it will drive down the price of marijuana. Chrystal says prices are already dropping. Over 15 years, she says, cannabis dipped from $4,000 a pound to around $1,500 a pound.

Chrystal says many growers in Humboldt County feel like Budweiser and Coors and Big Tobacco and Big Alcohol and Big Ag are going to come in and wipe us off the map.

Chrystal and Noah are making plans for how to survive if Proposition 64 is approved. Theyre staking their success on small-batch, organic, high-grade marijuana  or as they call it, connoisseur cannabis.

Noah oversees much of the couples cannabis cultivation. He takes painstaking care of each individual plant. He doesnt use pesticides, but instead sprays them down with seed oil and Dr. Bronners soap.

Noah points out the tiny hairy flowers on a healthy 6-foot plant. He says, If these hairs are really looking lush and white and full and thick and sticking up toward the sun, and these leaves are sticking way up and stoked, then I know they are fat and healthy and the crystal formation is coming on.

Noah Beck pays painstaking attention to each of his plants. (Sam Harnett/KQED)

To make a living with marijuana these days, Noah says you need to do more than sell great weed. He and Chrystal want their farm to be a tourist destination  like a vineyard, but for cannabis. A place, Noah says, where you can sit down, have a nice lunch and enjoy a smoke, a glass of wine, maybe stay the night in a little house.

A bud-and-breakfast, Chrystal chimes in.

If California voters do agree to legalize recreational marijuana, then tourists could stop in at Noah and Chrystals bud-and-breakfast. Yet, Chrystal cant help worrying about the local cannabis culture turning corporate.

Chrystal says older growers are used to life off the grid. They arent good at following regulations and working with the law. She thinks many of them wont have the business sense, the money or the inclination to compete on a larger scale.

I ask Chrystal if she plans to vote to legalize. She pauses a moment before answering. I would say no, she says, because of how it could impact small growers. Then, she adds, I will probably vote for it only because I feel like some lightning bolt will come down and strike me out of the sky if I vote against legalization.

At night Chrystal, Noah, their kids and a few helpers from the farm gather around a big picnic table for dinner. They relax, banter and share news of the day. Later, around a campfire, Noah and Chrystal pack a bowl and smoke. Some day soon, they hope tourists will be pulling off the highway to join them.

This story is part of our California Counts collaboration with four California public media organizations to cover the 2016 election. The partners include KPCC in Los Angeles,KQED in San Francisco, Capital Public Radio in SacramentoandKPBS in San Diego.

I just want to grow my own personal meds,,,could give a crap about the rest. I have a job.
T

LOL--I find it amusing that that is a small grow....
You must log in or register to reply here.

The 3rd Country to Legalize Marijuana Is... Going to Have to Wait Up to 8 More Months

Small Growers In California Getting Squeezed By Big Business