still the borgs??...or a deficiency?

I posted a thread awhile back about brown spots on one of my girls and a lot of people told me I had mites or a cal/mag deficiency.

I had two plants in one closet and the problem one turned out to be a hermi so I pulled her...leaving the better one which only showed slightly similar signs of the problem one. The first pic posted is of the better plants fan leaf right when I pulled the hermi so you can see the progression compared to the rest of the pics that I took today.

Let me know what you think. Is this mites moving from one plant to another or do I have some deficiency?...To me it looks more like bleach marks than mites sucking the life out of the plant and the edges of my fan leaves are sticking up like a sharade knife blade.

...some of the pics are with the lights on, and some were taken with just some cfls so you can hopefully see them better 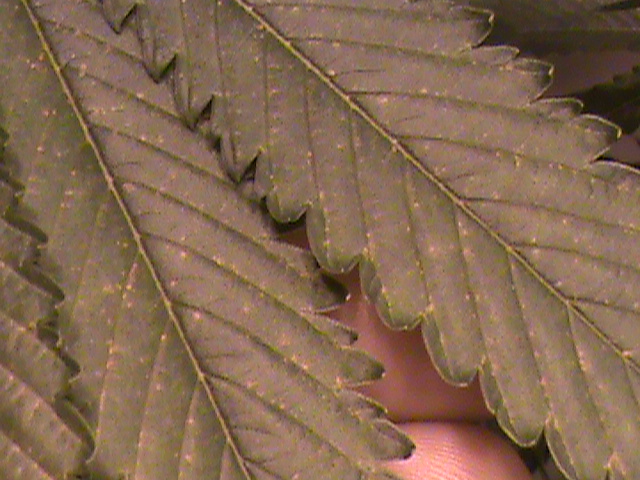 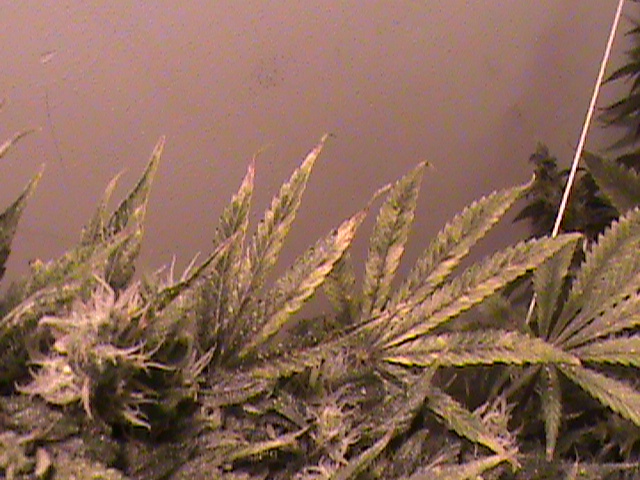 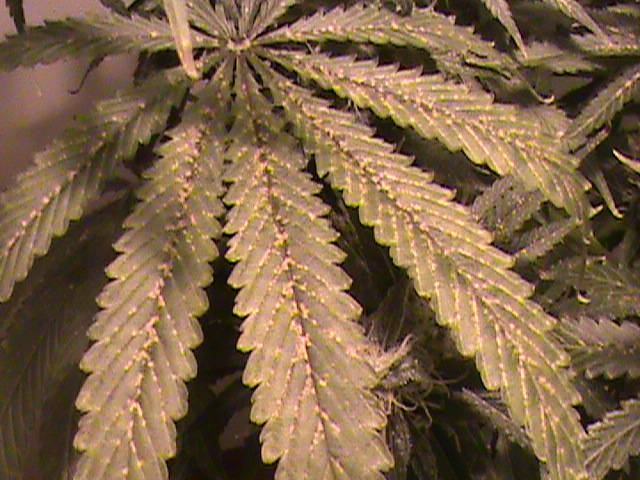 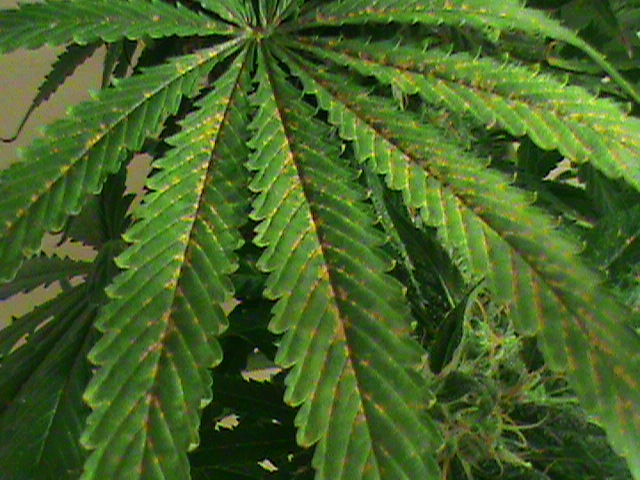 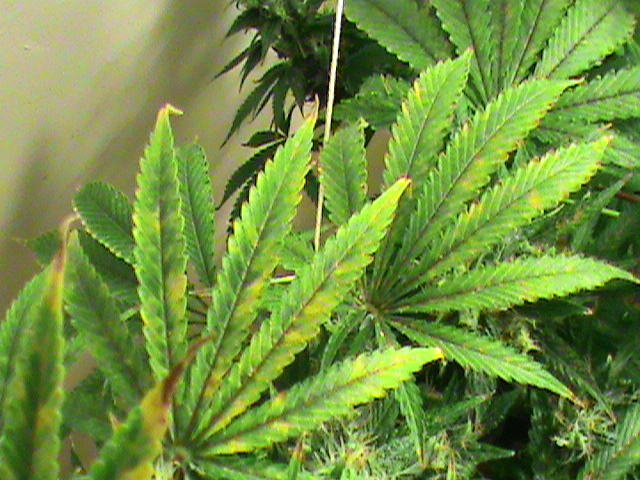 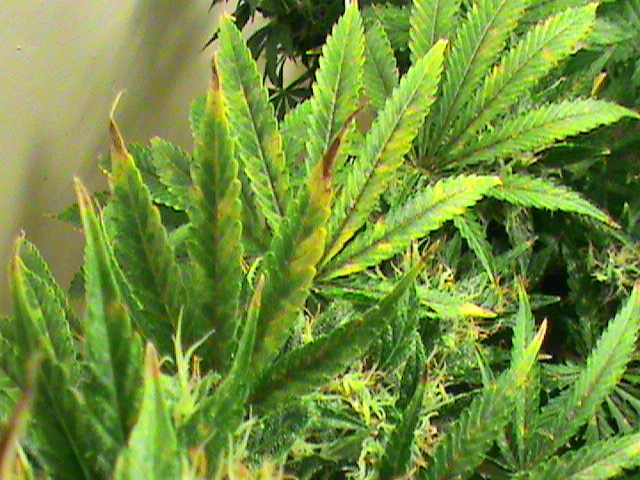 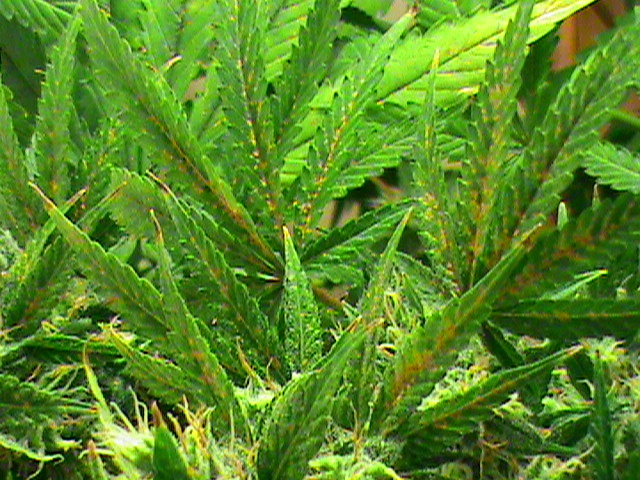 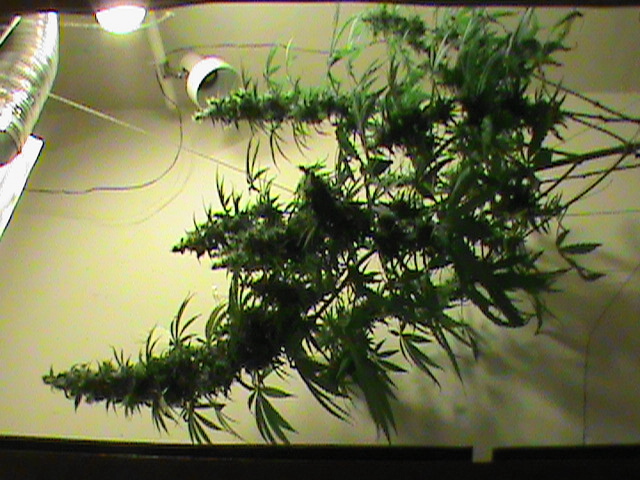 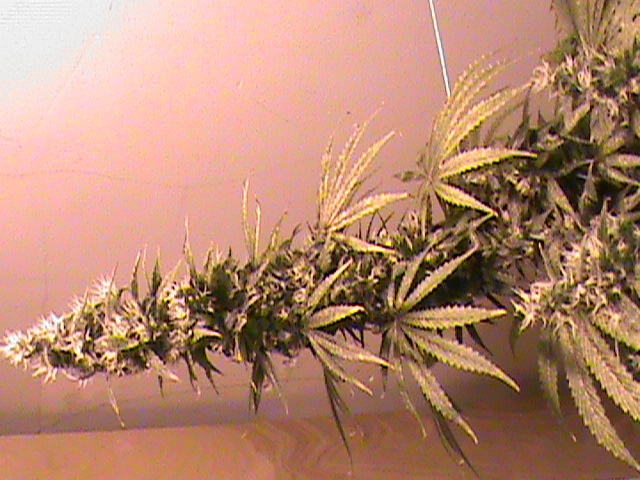 do you have an ozone generator?

and how do you check your pH, and what is it?


mites are 100% impossible to miss. Turn a leaf over in bright light and use finger nail to touch any "spots" that protrude from the leaf. Stare closely. Are they moving? Mites are very hard to miss on the back of a leaf.

I thought we already determined that it wasnt mites?

maineharvest said:
I thought we already determined that it wasnt mites?
Click to expand...

If he has mites that bad you would see webbing by now.

The ph runoff is 6.3 and I don't have an ozone generator, whatever that is.

I've had mites before and when I did I could find them but on this one I can't find any...just those damn spots. I've fed her some cal/mag plus but it hasn't shown signs of improvement.

About two to three more weeks until harvest so is it really even worth it at this point to try and correct whatever problem I have?
R

cal/mag Yes, try to correct, I bet it takes longer than that since she's been set back with fighting this.

Its obviously not mites but it looks like your first set of pictures is a completely different problem than the second set of pics. Your new pics look like a lot of yellowing with burning tips and your old pics have the browning of the veins. Couple different problems maybe????

Growdude said:
If he has mites that bad you would see webbing by now.
Click to expand...

With it being that close I would just keep hitting her with cal/Mg when watering.

Thanks Maine, and your right I most likely do have multiple problems. I guess I'll just keep with the cal/mag and then flush.

and I really need a better camera...or at least take the pics in better lighting