They'll get better, I took these but my photographic genius soon to be wife will be taking the rest. Just wanted to get them on here. I'll smoke tonight and give you guys an "in the moment" review. will be getting brighter lights to take pics with as well...


I will be doing this over time so bear with me. First to get the pics. I grew out 4 femmed , 2 pheno's:

This one was named after very special friend of mine. Moose (the sativa-leaning phenotype). This one began to purple up on the tips but cured to a red green brownish. I'll refine my descriptions as I go...lol. If you have any ?'s please feel free to ask away.

Growers Tilt: (9/10) other then my mess up on a seed not taking, this was a very solid and easy grow. It loved the FFOF in the later stages of their life and bloomed w/o any problems. These feminized seeds expressed no mixed sex and budded huge early on and poured out the resin like it was a stuck pig from Day One of the flip. Must say a pleasure to grow and to still grow. There were two pheno's expressed. Pheno#1 was about equivalent density of a skunk plant with med. hard buds that we're so sticky and the other was Pheno#2 which expressed nugs dense enough to beat baby seals to death with but just didn't mature quick enough imo/e. Much Love to Sweetseeds for releasing a great product for a very reasonable price.

Yield per plant was roughly 3.5 to 4 oz'ers but could of gotten alot more if my lamp hadn't gone out (and took less tester samples :stoned::rofl: )during veg and stretched like a SOB...*sigh*

Smell: (8/10)Hash then pungently Sweet with a hint of cedar or something woodsy...an open jar of cured J47 smells just like cream cheese, I kid you not. Delicious.
Taste: (9/10)There's not enough O's in the word smooth to describe this. First sensation is that of hash, then Very sweet, with a peppery undertone but with no harshness whatsoever, a truely unique taste experience for me that is quite pleasing. Notes of Floral and aromatic wood. (it's been about three months since I first jarred her)
Expansion: (9/10) It seems like you exhale double the amount of smoke you inhale. So velvety smooth with a nice cure.
Density: (8/10)
Buzz: (8/10) Creeping head high (bout 5 minutes b4 you're going woah, I...am...pleasantly buzzed), initially lasted four hours but now about 21/2 because of tolerance build up. There's a bit of body stone (~15%) but mostly clear, non-anxiety inducing head high (85%). Quite functional and inspirational, makes me motivated.
Duration: (9/10) on the virgin hit it was 2.5 hrs. indi dom 4+hrs. on sat dom then the high begins to wane to a non-burnout finish. Now after acclimation the chosen pheno last a good 21/2+ hours.

Overall Rating: (8.5/10) I most definately would recommend growing this beautful hybrid cultivar for people with: Depression, S.A.D., Chronic Fatigue Syndrome, ADHD, amotivational disorder, or just lacadasicalness..lol. It makes you happy without any anxiety but doesn't leave you devastated to the point of "The Fear". 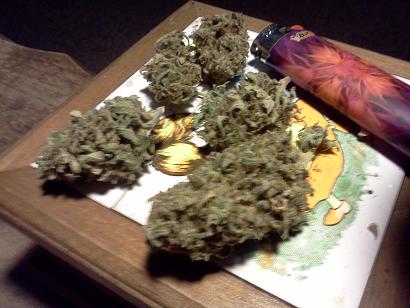 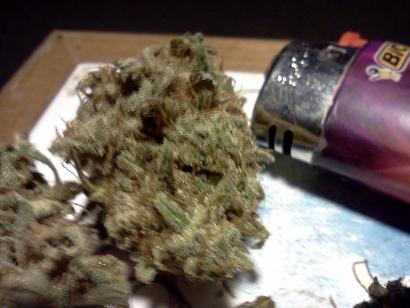 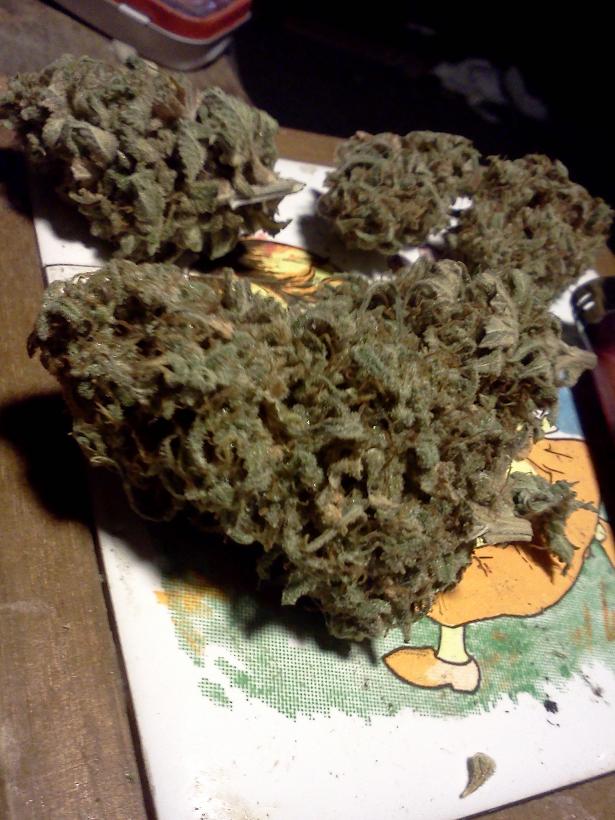 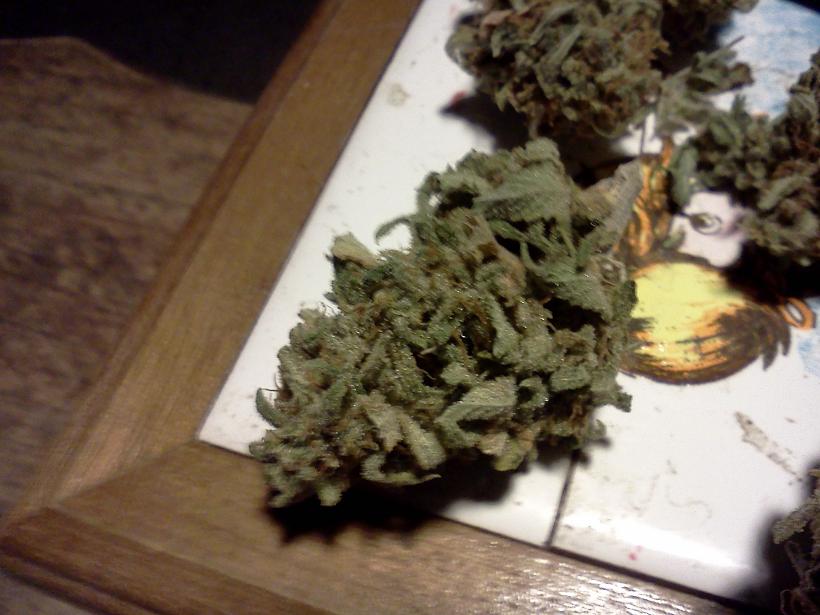 And on another sidenote. These trichomes' are tough ,usually the crystals combust on the first toke of most my strains but these trichs can go almost through a group of 2-4 people come back to me then you'll hear them snap...I'm thinkin' this strain would be great kief hash. So far I've only made some qwiso outta a lil trim. Got some more (trim) I'm reserving :cool2: for the upcoming nuptials.

The green sugar leaves I kept on because they are absolutely encrusted w/ trich's and add no harshness at all. :ccc: 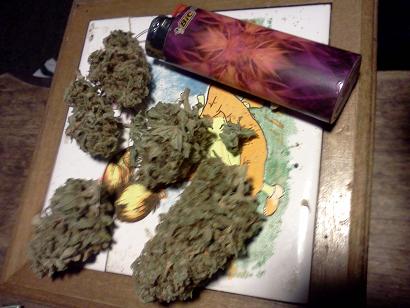 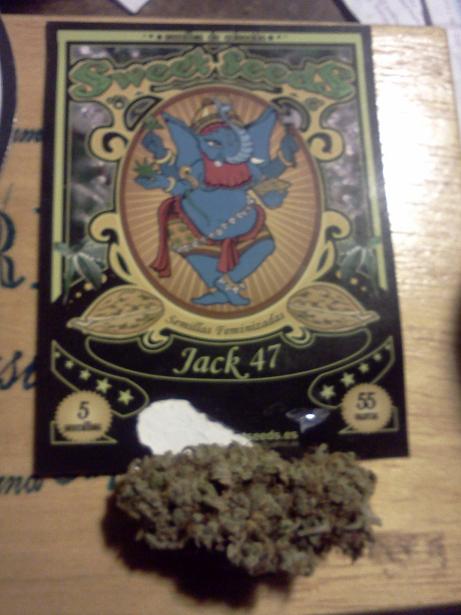 Ive been growing Jack 47 for about 4 runs now. I reeeeeallly liked her as well. Very smooth I love the wood desrciption lol I knew it was something I just couldn't quite put my finger on lol.... I agree mine is a very very much uppy head high.

Unfortunately the strain game is pushing her out after this round, but I do have a jar or two on reserve :hubba:

that's awesome, yeah she's been pushed out as well for my next grow which will be a bunch of freebies then onto my Mataro Blue (which I've really been feining to grow). But will come back to this strain (gave a cpl friends a few cuts and they're workin' with her now:woohoo: ) eventually to have a nice anti-anxiety strain/motivational weed.

thanks for postin' lemon,

This one's a lil better lit...:icon_smile:

p.s. figgered out what an open jar of j47 smells like. It smells just like cream cheese, believe it or not, a very exotic but deliciously enticing smell. 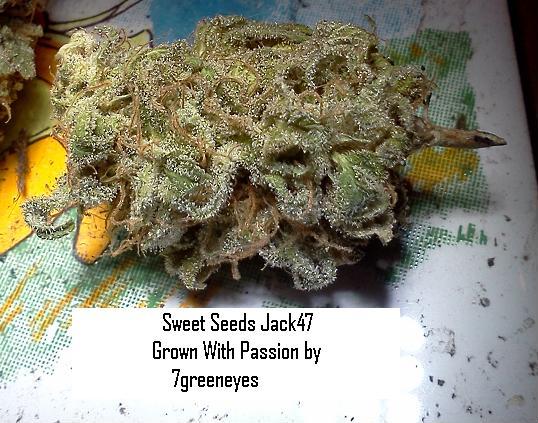 HERE's the url to a gallery of some of my jack's and other flavors atm....

I never consume sativas, but those are some tasty-looking buds. Wish I could find some indica that smelled of cream cheese (break out the lox and bagels). :icon_smile:

This Moose cut at 77 days bloomed matures at:

I'll keep this going so I have some sort of grow diary to check myself against. I get alot of medicated moments
R

Well what a beautiful thread. I had never seen this before..Nice work 7G... Love all thie pictures... and nice ratings... great, thank you.

YYZ Skinhead said:
I never consume sativas, but those are some tasty-looking buds. Wish I could find some indica that smelled of cream cheese (break out the lox and bagels). :icon_smile:
Click to expand...

Sativa's can give certain people rushing, paranoic thoughts. My wife for one loves the Indica's I grow but not so much the Jack (Sativa-dom) because of this exact reason. I know many others that are affected this way.
You must log in or register to reply here.
Share:
Facebook Twitter Reddit Pinterest Tumblr WhatsApp Email Link