I always smoked out of a joint or homemade bongs, but I was wondering where you get your glass water bongs... Can you make one at home somehow? Im tired of wasting my cigarettes for paper and wanna glass pipe for long use. Where do they sell those things? You think they sell them at a cigarette shop?

Headshops sell bongs...
Unless you kow how to hand blow glass (which you dont) then no you cant really make them
You can buy them online too, websites like grasscity.com

Why are you ripping up your cigs anyway? Other then smoking is dumb and you should not do it anyway. Don't they sell papers by you? I just go to any head shop in the area to get a bong or anything else I might need. We have five within 5 miles of my house. Once in awhile you can get them through mail order from the pot magazines.
S

Flylkorean said:
I always smoked out of a joint or homemade bongs, but I was wondering where you get your glass water bongs... Can you make one at home somehow? Im tired of wasting my cigarettes for paper and wanna glass pipe for long use. Where do they sell those things? You think they sell them at a cigarette shop?


You can get alot of good pipes & bongs at Bizarre Bizarre! I had my brother by me a pipe form ther its so0o0 pretty!! lol!! But i have also made a "homemade" water bong....All i did was take an empty 1liter plastic bottle but two holes in it (liek one at the top and one at the bottem) then put a little bit of water in it then put aluminum foil on top making a bowl....fill the bowl light it up...hold one of the holes suck outta the other....release then clear the smoke outta the bottle.....big hits!! Feels good!! hehe

go to the store and get some zig zags and quit using your cigs.
M

dude, this is total secret, no tell!, go to a tobbaco shop, and they sell these magic thingys called, "tobacco water bongs", bongs are neat-o,lol
R

I learned early on to smoke plastic/ceramic/bamboo bongs.
That's after I saw my friend break his $100.00 Star Trek bong when someone bumped the table.
That's 100 1973 dollars, more like $400 nowadays.
T

yeah when you break bongs at first because your stoned your like.. oh crap w/e but then next time you smoke it suddenly hits you and you feel like a idiot

I actually sat down one day and carved a nice small bowl with a mini electric screwdriver. It looks and works great i always show it off to my friends

you can just go to any normal cig shop they sell many kinds of pipes bongs. ect check out my bong i baught it at a cig shop for 18$ does the job you might have seen it already in the last post i did they sell bigger ones but from expreince the smaller ones get you more high 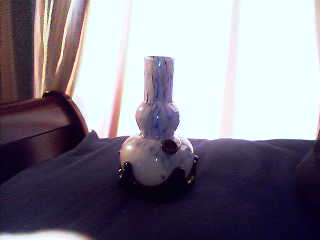 Thats a nice one.

I wanted to say something about home made bongs..

Years ago in high school my friends and I made about a 7 foot bong out of gatorage bottles. The first bottle (the base of the bong) was one of the shorter fatted gatorade bottles, to give it a firm base. One top of the short fat one were the regular size gatorade bottles. Putting it together was so simple: just cut the bottle of the bottle off, and put them together like lego, with duct tape on the seems to make it air tight. Well before we knew it this bong grew, and grew, and grew, and grew. It started as a normal bong that one person could smoke, but before its final smoke (and then destruction) it was a whopping 7 feet tall. It was shaped like an L, so that you could sit fully reclined, then bong sitting on the bong, and it would still reach you. Because the bong was so large it took at least two people to smoke it. Literally, it was so damned big you couldn't smoke it by yourself. It simply was not possible to suck on the mouth piece at the top of the bong and reach the bowl at the bottom to light it..man..those were the days. Even with two or three people, each person would hit it slowly first to fill it completely full of smoke, then you'd try and finish it, which was always damn near impossible. Damn those were the good ole' days..lol..
You must log in or register to reply here.
Share:
Facebook Twitter Reddit Pinterest Tumblr WhatsApp Email Link