Well these seeds were breed by Sam The Skunkman and were FREEBIES from Gypsy Nirvana's Seed Boutique. The thing behind these beans is the fact that they are over 15 years old or so i read. These seeds are very tough to germ but if you get lucky enough to germ one and get a female your in for a wonderful surprise. Out of the 3 seeds we germinated 1 was a male, 1 didn't germ, and the other was a mutant female but a female. She was grown outside and beatin down by deer but we did get some bud from her and a clone which is in flower and over 3 feet tall. The smoke is smooth and taste like Black liqorice or Anise. Three or four bong rips and your good to go for a few hours. 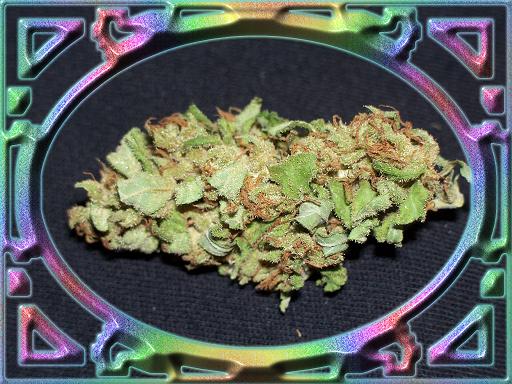 Whats up Zarnon. From what we have read the Durban Poison x Skunk #1 freebies are all old.

I have 4 of them growing. One even broke off the seed leaves trying to shed the shells but its putting on new leaves. Also when some of them open the oily seedleaves that need to open have dryed up a good bit and the plants will have half formed seed leaves that are brown on the tips. Im thinking they get off to a slow start but if you get a couple to grow they should take off and make up for lost time. Slim

how is the high? i have six that germed and are now little sprouts in some pure clean soil. i'm so psyched about these. are there any things to consider when outdoors? i.e nute levels and things like that. can't put outdoors yet as it still hits freezing temps at night and averages 42-46, still way to cold. thanks for any info.
~T-Bone
R

Ahhhhhhhhhhhh i pray i pray that mine germ then... do you think if i get a male it worth using for a cross breed??
D

i got some skunk#1 beans from gypsy and seedman that are from what i know 10-15yrs old.. i grew out a few indoors a while back and they turned out with super purple leaves almost black in color seemed sativa dom with a touch of indica and the plant didnt want to stop flowering so just picked,dried & smoked. nice smooth smoke with nockout stone.. them dpxsk1 look good as well
S

OOh nice TBG. Mutt I had no problem germinating mine. You just gotta talk sexy to them I guess.

TBG- how long was yours in flower? I am at 11 1/2 weeks and getting impatient!
T

Sorry Mom can't remember how long she was in flower but it was longer than usual i think.

SmokinMom said:
OOh nice TBG. Mutt I had no problem germinating mine. You just gotta talk sexy to them I guess.

TBG- how long was yours in flower? I am at 11 1/2 weeks and getting impatient!
Click to expand...

glad they worked out for ya ma. Mine must been "bottom of the bin" stock.
T

We tell ours GROW or DIE. :rofl:

SmokinMom said:
You just gotta talk sexy to them I guess.
Click to expand...

good to hear all the news on south african durban poisen x skunk #1, just started some nl, We will wait to try the freebees, has any one had to crack the shell on those babys? Smokin mom how did you germinate? How tall did you let them get in veg? You said 11.5 weeks, how tall are they now? And as far as nirvana goes I think they are great! thanks again for all the info, jr
S

Hey there. I just germ'd with the wet paper towel and baggie method, worked like a charm. All 3 germed in about 36 hrs.

I am loving this weed. A great heady daytime buzz for sure. LOVE it!.

Got these exact same seeds from gipsy as a freeby. 2/3 Germ'd, slowly, a little birdy came and took em away cause I had already sprouted the NL by the time they Germed
S

When I was at the 06 cannabis cup they were giving out the skunk poison mix from gypsy nirvana, they were an unstable strain, lots of males and hermies, the females that I did get had three different characterisict. Some had very light green tint that were dwarfs, but very fruity!! others had dark green color with male characteristics such as thick stalk that grew faster and taller than others, and between those two, each of them had hermies. I was able to produce some seeds and have been working on stablizing some of the better genes. What I have now is a thick stalk with light green leaves that grows fast and tall and taste fruity over all flowering takes about 10 to 12 weeks but the end result is worth the wait!.

I got some of these same freebies from gypsy last spring...I heard that they may be a bit old...I'll try and germ all of them in late april for a mid-late may planting...

germ'd 5 of em for my current grow and only one popped. lookin very healthy and a sharp contrast of sativa to indica next to my other babies. Here's hopin for a female :bong:
T

Hallo boys and girls its an old thread but just had to sit my self back on the chair after picking myself off the FLOOR!!!! did i just read SAM THE SKUNKMANS 15yo SEEDS WORK?? as a backyard breader! those beans would be like a GOLD MINER SAYING EURIKA BOYS IM RICH!! were can i get some (feelfreeto email me private!!!!) are they the real deal! as this guy is a legand!! friends with my Aussie mates Neville and Scott:holysheep: