Ok my rooted clones that I transplanted into 16oz cups are looking bad. The new growth seems small/stunted and is bright lime green, and some yellow.

Clones were rooted in Root Riots, then transplanted into "Professional Potting Soil" with more perlite I added, then I watered with a light dose of Clonex Rooting Solution with an EC of around 0.5ec(250-350ppm) and a pH of around 5.8

I figured since the roots were only poking out a bit, that it was still considered "soil-less" hence the pH of 5.8 when I watered after transplanting into the soil. Should it have been more around 6.8?

Just trying to figure out what is going wrong? 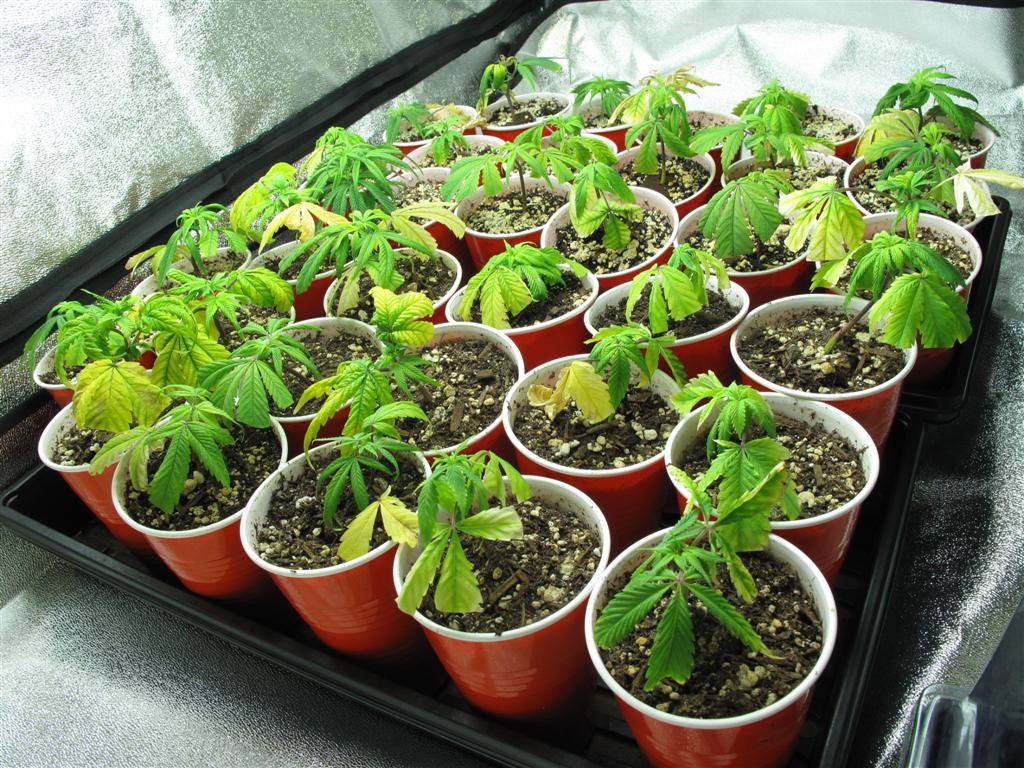 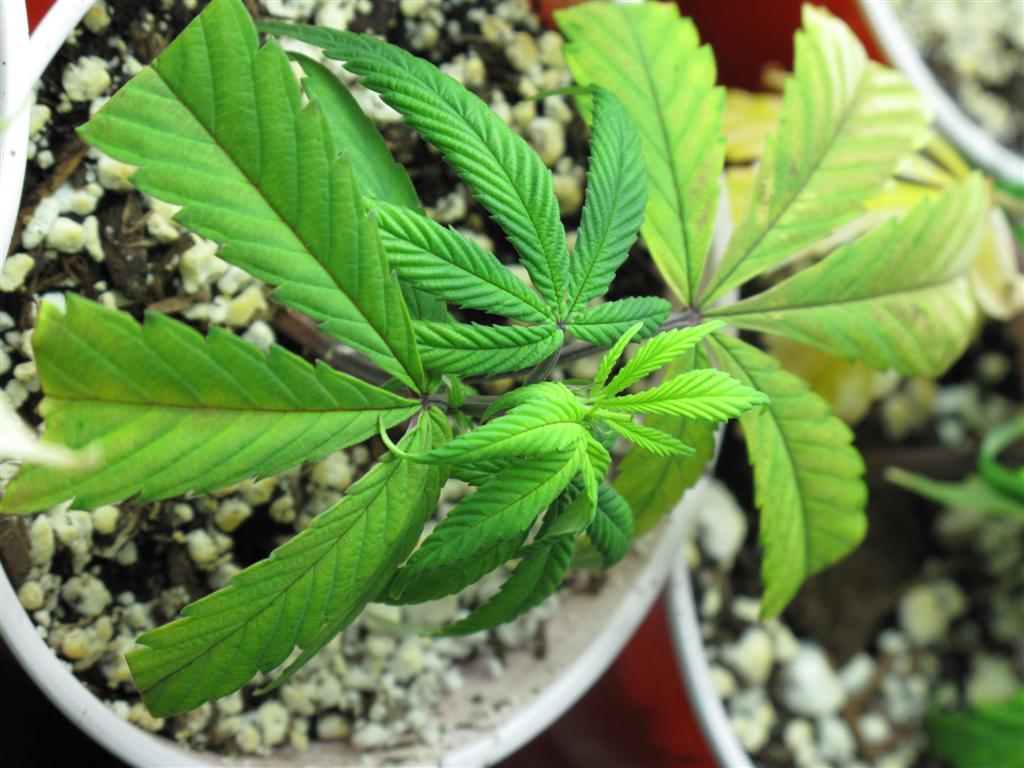 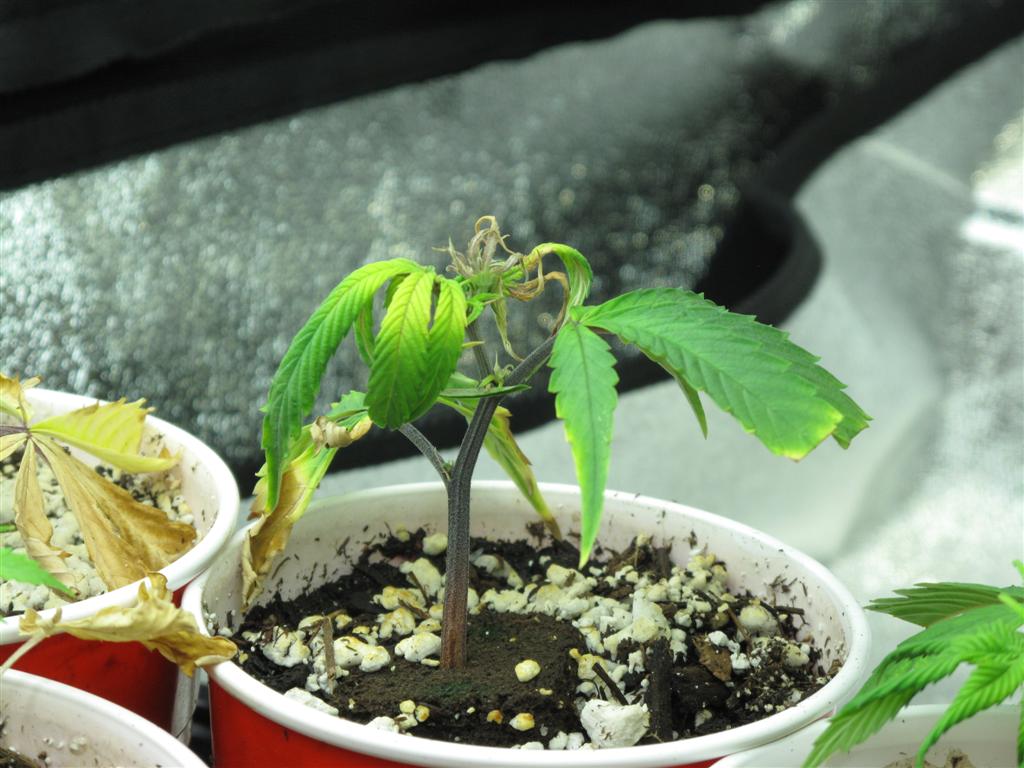 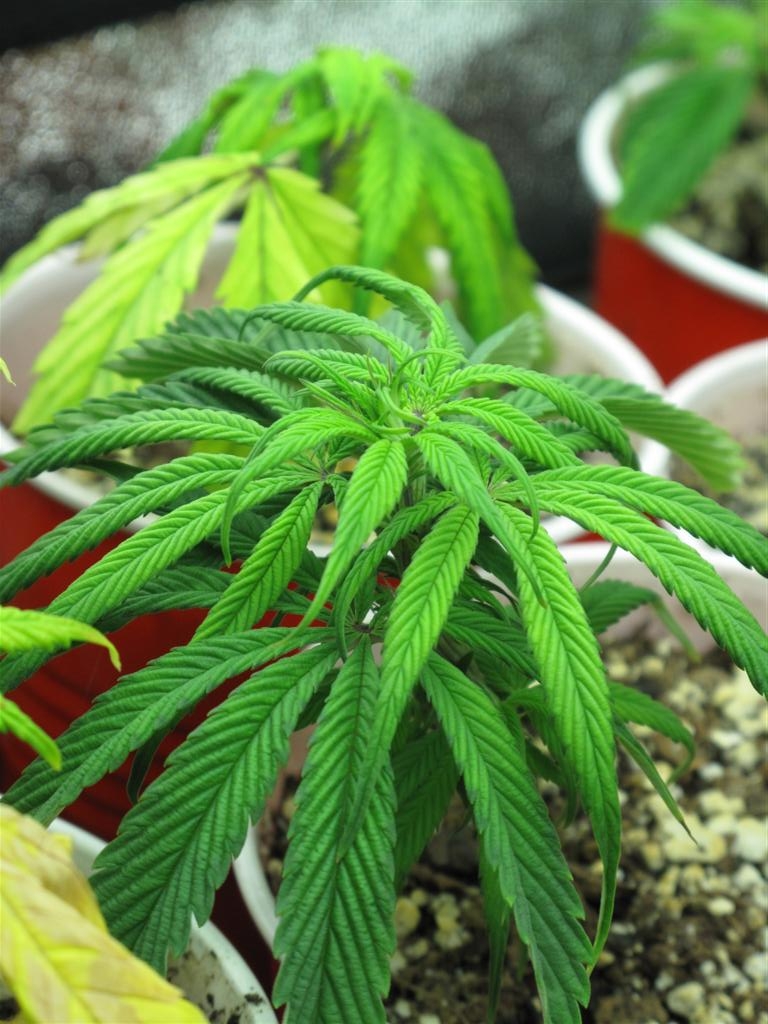 well.. usualy that bright neon new growth color happens when you put them under a HID.. nothing wrong with it.. and to me it looks like they need more water.. try that out.. and just give them water.. no nutes.. the nutes in the soil should be all that they need..

They need a dose of nitrogen and it def helps to let the roots get more established before putting them into soil. Keep the medium extra moist for a bit. It might help to mist them a couple times a day too.
B

When did they start yellowing? how long after transplant? Yellowing and lime green together is almost always Over watering.. Cant tell by the pic for sure but the soil looks soaked. If they been sitting in soaked soil for a week then that is the prob.. I would not give any nutes untill they come out of this. A rooted clone in Soil does not need any nutes for the first few weeks the soil has all they need. They need time to establish then nute em! JMO

Well maybe Im wrong but I think it is too much water, not not enough! lol good luck!
S

I watered only after transplant, and just once until some dripped out the bottom. That was about a week ago for most. Some of the plugs were pretty dry, not rock hard, but some were getting there.

The yellow on most I think started while still rooting, but certainly got worse after transplant. It's been over 3 weeks I think since they were cut, and most started showing roots around day 7-10. I've been pulling out almost every other day, plugs showing roots. Most had a few coming out from every side, but lots too with just a white poke out the side.

So yeah most rooted in 2 weeks, and have been in soil for a week. Some are a bit newer, but within days.

The soil didn't have a NPK lable or have "fertilizer" in the ingredients, but did talk about composts and nutrients to sustain growth. Was it a bad idea to feed a little of the Clonex Root Stimulator even tho it was such a low amount? I was worried because the soil was on sale ($4.99 from $9.99) a bag and there seems to be lots of bark, so maybe it was low on nute content?

But I'm not sure if the green growth it because they need nutes, or from too much?

I think the stimulator was ok and even Very Small amounts of nutes, I like to make sure they are very established though. But Hmm that soil in the pics looks very dark to be a week dry. Take one Upside down and pull the cup up. Tell me what the Moisture content is for real. I have only had a few Very healthy tops not have a litle yellowing when rooting, bottom cuts seem to always have a little yellowing for me!! pretty Normal I think they are too young to be too worried. Don't over water them and in a week or two they will be fine!
T

Given your description of your soil, I am guessing that it is at least a part of your problem.
S

Soil said enough nutrients for 4 months of growth...should I assume it's a hot soil?

try to get ahold of some pro mix. I stay away from soil with nutes already in it.

My first thoughts were in line with thg's. Sounds like a really bad soil. i would get them into something known to work well ASAP!

I burnt my last batch of clones with FoxFarms Ocean Forest which is a hot soil. It took a few days but the plants caught up to the soil, so to speak, and took off like rockets. Most of the original leaves ended up dead and crispy but were replaced with dark green deliciousness within a week. All survived and thrived.

How do the growing tips look?