DO NOT smoke moldy weed

Heres a lil article at Erowid.

I can't believe that you found this great post. I hope one of the Mods will make this a sticky, and give you the proper credit for this find, I am blown away totally by this.

Growers taking time to harvest a healthy cornucpoia of cannabis must also carefully watch over their cut crops. In addition to two-legged thieves, myriad bacteria, molds and insects have been known to rip-off your stash while curing, drying, or in the fridge. Avoiding these ubiquitous threats is nearly impossible, but there is a way to lessen their impact. The key is being able to manipulate storage conditions.

A variety of bacteria grow on damp marijuana. Many are deadly. Researchers have found _Klebsiella pneumoniae_, _Enterobacter cloacae_ and _Streptococcus_ (group D) growing in government-supplied reefer. _Salmonella muenchen_ was found in marijuana growing across the Midwest. (Let someone else roll the joints. I don't lick rolling papers anymore!) Under anaerobic conditions (i.e., damp marijuana stored in airtight containers), _Clostridium_ species will rot pot; these are the famous boutlism bacteria.

In addition, a number of bacteria-like Actinomycetes have been identified in confiscated ganja, including _Thermoactinomyces candidus_, _T. vulgaris_, and _Micropolyspora faeni._ These bugs cause allergic reactions (sometimes severe), as well as "Farmer's lung" disease.

Insects in pot are less intense. Growroom critters, such as aphids and spider mites, rarely damage marijuana after harvest. Smith & Olson (a list of references appears at the end of this article) identified five beetle species from confiscated Mexican weed in San Francisco. They completed this study at the request of the DEA agents, whose offices were overrun by the pests. The predominant species, _Tribolium confusum_ (confused flour beetle), attacks only seeds, not marijuana proper. Two other beetles cited in the study, _Adistermia watsoni_ and _Microgramme arga_, are fungus feeders (the marijuana was moldy). Thankfully, the researchers found no cannabis equivalent to _Lasioderma serricone_, the tobacco cigarette beetle. Otherwise some whacked government lab would be growing the bugs en masse to spread across the continent.

Fungi destroy more bud than bacteria and insects combined. Bacteria in marijuana may be more dangerous to humans, but they are rare. Molds are common, and can be nasty: Ramirez reports four policeman developing pulmonary histoplasmosis after pulling up a 5,000-square-meter plot of marijuana in Puerto Rico. Some fungi won't rot pot, but they will put you in the hospital.

Many fungi causing disease in plants die off after their host is harvested. Exceptions include _Botrytis cinerea_ (the cause of gray mold) and _Alternaria alternata_ (brown blight). After harvest, your competition becomes _Aspergillus_, _Penicillium_, _Rhizopus_, and _Mucor_, the baddest actors on the planet. Each genus causes disease under different conditions:

Schwartz scraped _Aspergillus niger_ from the skull of a marijuana smoker experiencing sinus headaches. I frequently encounter _A. niger_ growing in ganja stored at room temperature. It does _not_ increase potency. Kagen also reports _A. niger_ growing in moldy marijuana, along with two _even nastier_ Aspergilli: _A. fumigatus_ and _A. flavus._

Chusid et al. blame _A. fumigatus_ for causing near-fatal pneumonitis in a 17-year-old. They note the patient buried his marijuana underground for "aging." No doubt the patient was looking for Margolis & Clorfene's fungus, but _A. fumigatus_ found him instead. _A. flavus_, on the other hand, kills slowly. It oozes carcinogenic metabolites called aflatoxins. Llewellyn & O'Rear found aflatoxins contaminating Virginian marijuana.

Five _Mucor_ species have been described on _Cannabis._ Members of this genus grow fast and die young. One of them, _M. hiemalis_, regrettably bioconcentrates (and cannot metabolize) the herbicide paraquat from tainted substrates (Domsch et al.). _Mucor's_ first cousin, _Rhizopus,_ occurs in soil, ripe foodstuffs, and occasionally on people (especially diabetics). Grebeniuk isolated _R. stolonifer_ from hemp stems. In an inoculation experiment, I quickly rotted some damp marijuana with a colony of _R. stolonifer_ found growing on bread.

DIAGNOSIS Rotting marijuana produces a spectrum of odors, from stale to musty to moldy. _P. italicum_ perfumes a lavender bouquet, while _A. flavus_ smells like a locker room. _Clostridium_ bacteria stink like carrion.

To check for aflatoxins, inspect your stash under a black light (in medicalese, a "Wood's Lamp"). Material contaminated with aflatoxin-producing _A. flavus_ will fluoresce to a green hue under ultraviolet light.

To screen for insects, simply shake samples in a No. 10 steel sieve. Of course, not all bugs found in marijuana cause damage. Some are simply "innocent bystanders" caught during harvesting and die right away. Live (and chewing) insects are more suspicious. A hand lens is helpful for I.D.

CONTROL
Avoid damaging plants before they completely dry (even while they are in the ground and growing). Wounded tissues release exudates on which fungi feed and establish a foothold. Lucas says diseased and nutrient-deficient leaves (as well as old yellow leaves) produce more exudates than healthy leaves. Expect more mold problems in poorly grown plants.

The oven-drying method inevitably leads to a harsh product. So most people air-dry by suspending plants upside down with enough space for circulation. Drying rooms should be cool and dry, preferably in uninterrupted darkness. (Most storage fungi require light to sporulate and spread.)

Living cannabis plants are about 80% water. Perfectly dried marijuana contains about 10%-15% water or moisture content (MC). Material below 10% MC becomes too brittle and disintegrates. Fungi cannot grow below 15% MC. Unfortunately, many growers market their crop _above_ 15% MC. Cannabis, like corn flakes, is sold by weight, not volume. Tobacco farmers also allow thier product to gain weight by reabsorbing moisture before sale. They term this risky business "coming into order." Recently purchased products should be redried. Freezer storage will not protect damp pot. Placing lemon or orange peels in stored marjiuana is discouraged, as they raise the MC above 15%. Dipping _Penicillium_-infested plants in a solution of baking powder will inhibit these acid-loving fungi but the product must be rapidly redried.

Maintaining stored marijuana at 10%-15% MC also discourages insects. Insecticides have no application in stored marijuana. Their residue pose a danger to customers. Also, water-based sprays will kill bugs but trigger a fungus infection by raising the MC. Fumigants (gas, not sprays or aerosols) contain no liquid, thus they do not trigger mold infestations. But they leave residues in air pockets of fumigated material. Big buds are full of air pockets. Poisons are very useful for disinfecting drying rooms, but only _after_ the crop has been cleared out.

Low temperatures will "freeze" an insect infestation. However, with rewarming, many bugs continue their destruction. Another drawback to freezing above-15% MC marijuana involves the aforementioned exacerbation of _Penicillium._ Heating marijuana in a 66-93 degree Centigrade oven for 10 minutes will kill most pests. This also dries out the product--again, the cornerstone of control. Marijuana should not be heated longer than 10 minutes or 93 degrees Centigrade to prevent THC oxidation.

Ungerlerder et al. sterilized marijuana with ethylene oxide, reporting no loss of THC from fumigation. These researchers also irradiated their dope with high-dose Cobalt 60 (15,000 to 20,000 Gray Units!) with no loss of THC. _This method is not recommended for novices._

Moody et al. evaluated waterpipes for smoking _Aspergillus_-contaminated marijuana. Unfortunately, they found only a 15% reduction in transmission of fungal spores.

In Chicago, goofy dudes spray their marijuana with formaldehyde. This kills insects and fungi, but at a price. The treated weed, known as AMP, causes anoxia and psychomotor retardation when smoked (Spector). According to _Newsweek_ (Jan. 20, 1986), a few ill-intentioned dealers dipped marijuana in rat poison or insecticides like Black Flag or Raid. They called this product "WAC." Indeed. Have a nice day.

Wasn't really my find. Someone posted the link on another site

You found it for us BBP
K

I am private messaging a couple of the mods, and am going to ask them that you get the credit for this and if they will make a sticky of it. This is what we are all about. Growing and being safe, and that certainly includes watching out for our health too bro.

OK guys it's a sticky. Maybe i should move this to the harvesting, drying, and curing section. What do you guys think?

Thanks for the great information it definitely isn't any fun. Peace
K

You are most welcome my friend.

Mouldy weed isn't good to smoke no matter what; weather it's because it degrades potency or not.

Would you normally - if it didn't have weed on it - pack up a bowl of mold and spark it?

I don't think so.

good read, thanks for the info BBP. makes you think about all the weed you've bought and smoked that might have had some of this stuff on it..

I do keep up on the mold situation here in Puna too. I'm constantly doing battle with mold! One day it's sunny here,with temps right around 86 degrees under clear blue skies. Then by late afternoon, here comes a tropical squall right off the ocean. Causing more havoc than anyone can imagine! I believe a lot of our strange weather patterns here are caused by different elements. One, Hawaii is what is termed as semi-tropical. Meaning that all the west side of the islands are dry, and the east side very lush! Over the past several years we have had either El-Nino, or his sister type weather here,again causing Havoc the like no grower has seen in 30 years!

For me I can no longer grow Indica plants. But cross strains were indica is dominate is where I will check this next grow season. Bud Rot has been a big problem for me this year.
At Sept. harvest, I probably threw away close to a pound & a half of smoke that either had 'Bud Rot', or Mealy Bug infestation!?!?! So the coming seasons I will try to create a newer mold resistant dominate indica strain.
As to what I'll cross this Indica-kush plant is up in the air. I'm very limited to seeds at this current time. As a matter of fact. My last two grows were with 'bag seeds'!!!!! So my grow was totally at the mercy of my seed strains!!! 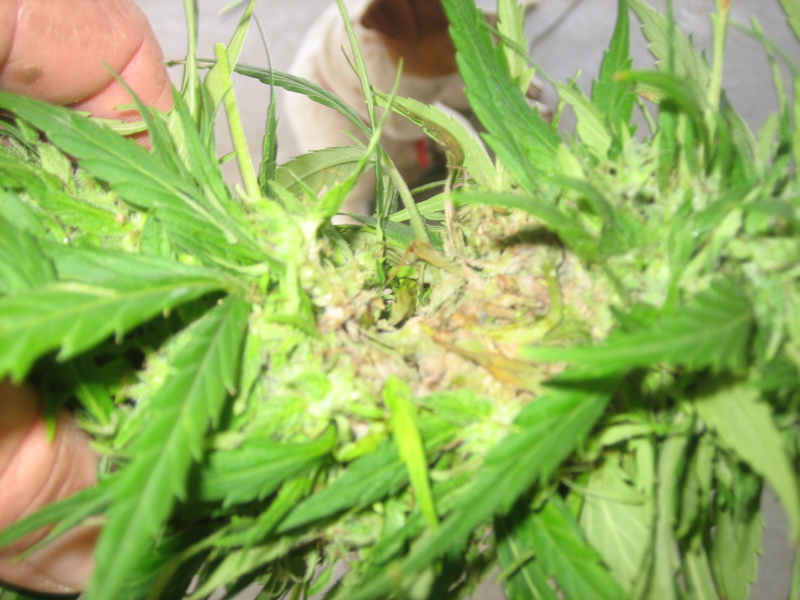 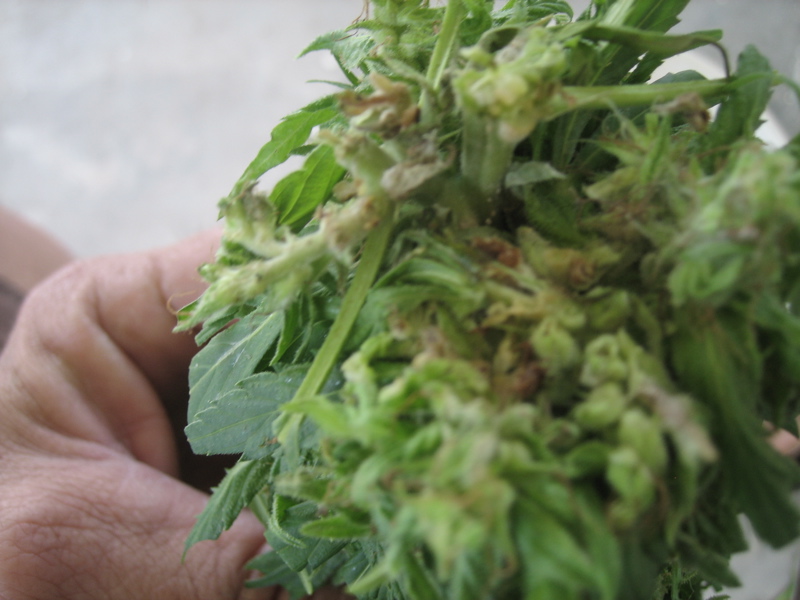 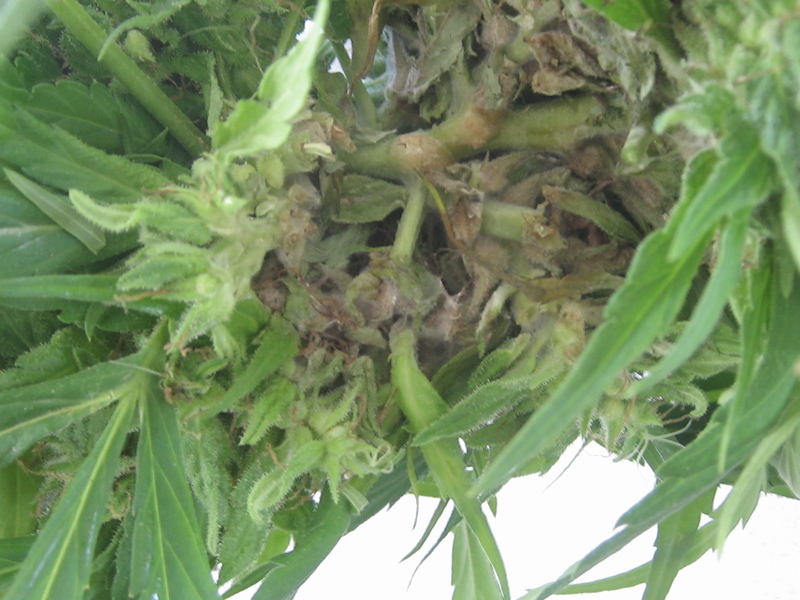 Have you never heard of ISO hash/bubble?

24 ounces is a lot of material to throw away.

Somebody tell me what can live exposed to an open flame? CDC say no bacteria, germ, insect, mold, or fungi is capable of surviving an open flame. It is why it has been used for sterilization for 100 of years. And I agree with HIE hash and hash oil are good alternatives to chucking moldy pot.

umbra said:
Somebody tell me what can live exposed to an open flame? CDC say no bacteria, germ, insect, mold, or fungi is capable of surviving an open flame. It is why it has been used for sterilization for 100 of years. And I agree with HIE hash and hash oil are good alternatives to chucking moldy pot.
Click to expand...

A smoldering ember is not as hot as an open flame, plus a lot of material is carried away with the smoke that hasn't even gotten that hot. Spores are tough and will survive and enter your lungs, where it is a nice warm wet habitat for mold.

I nearly died with a post surgical abdominal fungal infection. Three months in the hospital and 6 more months with suction tubes hanging out of my guts. I'm probably more careful than most people, but the danger is for real.