Hydro or Soil? Which is best overall?

My cousin and I are going to turn a closet of his into a grow room big enough for one plant. However, there is one thing we can't agree on hydro or soil grown. I need some opinions on which is best.You know a typical pro and con list. Like which one is more work, which one cost most and so on ect. Please leave me some feedback on what you think and what you would do.

soil all the way for all grows
G

Hydro grows pot (during veg) faster, but like Hick said, go with soil.
Are you aware that if you grow just 1 plant, from seed, it may be a male and that means no buds?

Hydro, DWC (bubbling bucket) is my favorite. Start out with at least 4 or 5 then keep the best female after they start to flower.

theres alot of good hydro and soil information on growing pot on the web. if your not sure read about 15 or 20 articles and go from there. like weeddog says bubbling buckets are good easy and not too much, unless you have too buy lights, but it sounds like you already have em. dirt is for sure easier and cheaper.

weeddog you recommend air pump instead of water pump for the hydro system?
G

Where'd you get the idea that hydro yields more bud than soil?

Here's a plant I grew last year in DIRT. 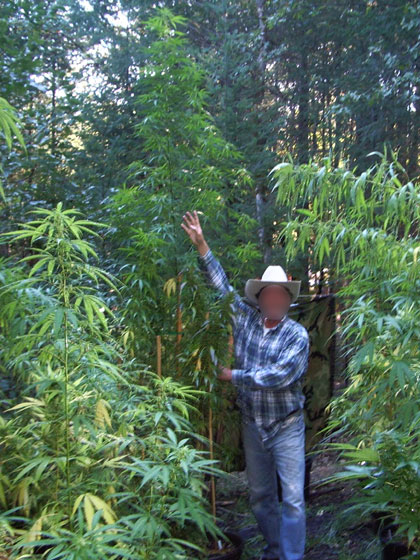 GanjaGuru said:
Where'd you get the idea that hydro yields more bud than soil?

Here's a plant I grew last year in DIRT.
Click to expand...

Sure, lets see you grow that in your closet.

bizzy323 said:
weeddog you recommend air pump instead of water pump for the hydro system?
Click to expand...

Heres my dirt ones from 78. they were just starting to flower, pulled about a third cause they were males. bag seed 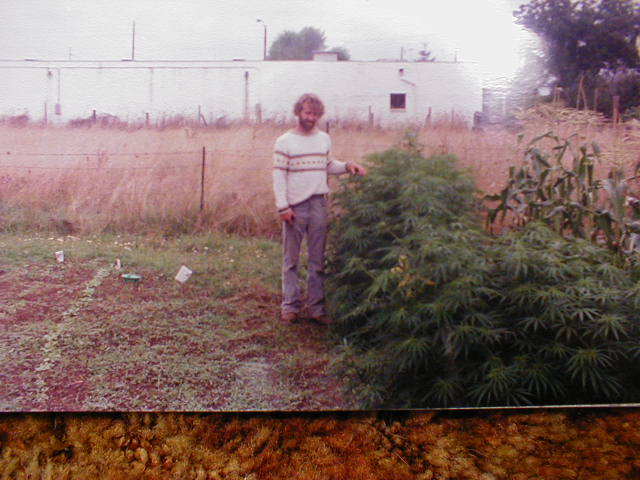 I don't believe hydro yeilds more than dirt. If you achieve 1 gram per watt, hydro or soil, you're juust about maxemizing efficiency. Hydro may get you there faster, but bigger OR better, I think not.

one way i really prefer soil, much higher yields then hydro, but on the other side i really prefer hydro or aero because the faster finishing of the plants, and the direct feeding to the roots.

Actually some of the plants in the pic WERE inside.
This was a weird strain, aquired from a friend who travels the world, picking up exotic seeds of little-known strains. He called it Hobie Big Bud. Because of it's size I'm guessing the strain came from either S.E. Asia or Africa.
This fucker wasn't finished until mid-Jan.
We had out first hard freeze in Nov. Just before that we had no other alternative but to bring them inside.
We hung a few 1000-watt HPS from the ceiling of his garage and put the plants in there, bent over, where they remained until harvest.

That huge plant only yielded 5 oz., and the weed was good but not that great. I've gotten up to 2 lbs. of killer weed off plants 1/2 that size before (not that strain). so we were disappointed.

Here's a pic of that plant at harvest (thanks to mellow dude for the photoshop). Ralphie is holding up the top of that bent-over plant with our legal med-mj garden sign.

P.S. Ralphie is not fat. He's got a bag full of fresh-cut buds stuffed in his blue hoody. 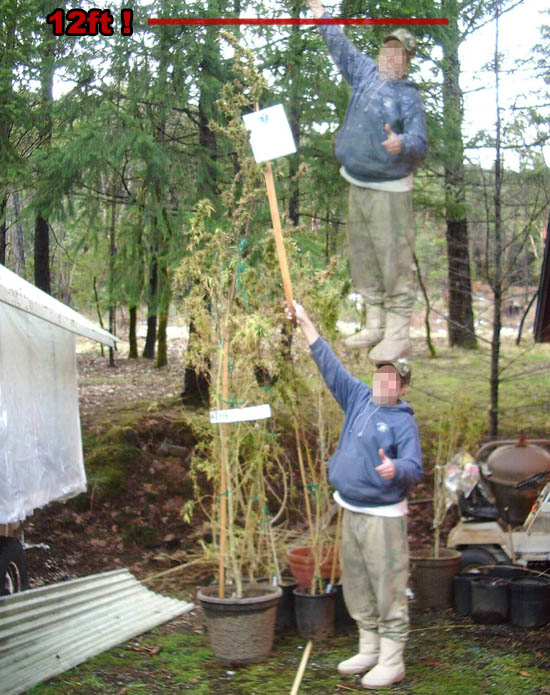 doens't look really dense, that 12ft plant, a pitty. and do you know why? cause the pot you were using is way too small, to develop some nice roots, specially outdoor.

It looks tall enough for some giraffes.

tall, yeah, but tall doesnt mean high yield, it has to expand more in weidth, look @ mine, of last summer, and this was only second week flowering, was 190 centimetres high without the pot, if i didn't topped it it would be like 2,40 metres or more

Those plants were sort of an experiment--we had lots of other strains in the garden. But we had seeds from a rare strain--from North Africa I just found out. The person we got them from didn't know anything about the pot, they were just seeds he picked up in his travels.

When we planted those, we didn't know they were going to grow that tall or take that long. In those size containers we grew 7'-tall trainwrecks that yielded approz. 1.5 lbs. bud each.
Btw, the containers are pulp pots. When the roots hit the bottom of the container, they grow right through them.

I think one reason the buds were so sparse--only 5 oz. total off a 12' tall plant!!!--is because when we had to move those plants indoors in Nov.,they lost a lot of their main roots.

Interesting plant GanjaGuru. It's very tall and with this height you would think it should be much wider. You think that's because of the the strain or do you grow that way?

Those two guys, the twins, standing on each others heads, they work in the circus, do they?..
You must log in or register to reply here.

My Frankenstein!!! Sharing my world with u guys.let me know what you think please
2 3 4