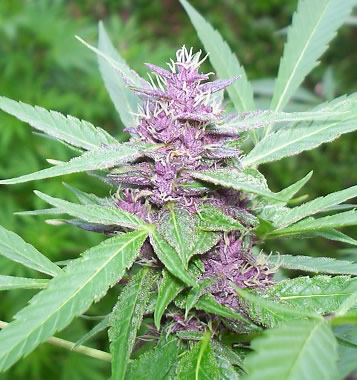 i like the purple too. what kind of weed is that? i know that frost will turn buds purple like that.

This is Purple Power. Not sure if that's the same purple as you get with frost, it will get you bud rot.
M

DAM that looks good
is it cronic
mmmmmmmmm
J

hook a brother up?

haha, i knew it, i looked at the picture and said, that is Purple Power. Very nice strain, but you need to love the earthy taste. Man, i miss Purple Haze

put the purple in the dutch let it burn like ush

will be smokin' it in a couple of months

Picture of a bubba kush bud, from a friends garden. I was gifted a cut of this beauty.

Any seeds available of this strain ?

Mar no seeds sorry. she is one of the "so called" Elites being raved about, or at least highly sought after, in our part of the world. Though, I find it hard to believe it is related to a "Kush" at all, and all information on lineage is sketchy, at best. I do have some friends that are working with it, outcrossing to some other things. I might be able to procure a few beans there.
The report I recieved on her wasn't real impressive. My friend says "not a real high yeilder" and "smoked nice, but not a "keeper" in his garden". He let it go fter only a couple of rounds.
Says the OG kush(of which I also swindled a cut) is far superior in all aspects, and it even looks/grows like a "Kush". But I don't ink it has the color that bubba carries. Let ya' know my opinion in a few months.

here are a pic of the Og(top) nd bubba(bottom) in veg. Bubba is probably one of the prettiest that I've ever grown.

Hi Hick, thanks for the answer.

Do you grow them naturally outside? Are these sativa plants? They doesn't look that way.

I notice a few people here on the board carry their own seeds, so, i was wondering, would it be a good thing to start a seed swap club or something. We can setup an exclusive seed swap forum for this and maybe make it a special group only for invited people or so.

Just to share the different strains with eachother. What do you guys think?
D

that might work. I know I don't wanto spend a fortune buying every one I want to try. I like variety. Work out details
D

i would love to grow some good shit but i cant seem to find any good seeds.. maybe somebody could spare one??
C

I can get my hands on some good seeds. I have 4 white Widow xGS in my yard right now. I'm hoping to have a male so I can seed some of the flower and get some seeds.

But I can probably come up with seeds for cheap froma breeder I know and swap them with people.

I'd love to try some of the premium strains out there.
S

marp, taht's a great idea, in that way, we can expand our own personal seedbank. I have a few strains now, some can be swapped, some strains not, cause i have strains that nobody else has on the planet except the breeder from who i got them, but i will put up a strainbase where members can list up the strains they own, so people can negogiate through PM for swapping seeds.

January 2023 Bud Picture of the Month