I've been using Strainly for almost a year now.
Only good experiences. One delayed shipping with one member. The other 6 order went more than well. I like the rating system. Waited the end of winter to make my first clone order. Will let y'all know how it goes...
Overall great experience.
J

I love Strainly. Ive found stuff on there that Ive been looking for, for YEARS.

Last week I ordered a Clone, Dominion Seed Company... Local Skunk. My 2 buddies have already grown the Local, Dominion Skunk, and Granny Skunk. We kept 2 killer phenos of each, and all the males from 6 packs for further testing. 2 packs of each strain we went through.
Also got original NL5, Mel Frank Sk1, Ed Rosenthal 1982 Durban IBL, before Sk1 was added. 80-100 days flowering.
Been looking for this stuff forever.

Were you around in the 70's, 80's or 90's? Because how are you going to know if these are the real and actual cuts from these plants? People lie all the time in the seed and clone biz
J

I was born in the 50s, and have been smoking since 67. So yeah, Ive been around a while.

Only clone is from the Dominion gear, and I ran the Skelly/Sk1 back in the early 90s-97 until the feds got it. I started buying seeds as soon as they became available by mail order, and am also from a state that is known for weed. Kentucky. Ive seen lots, and lots of different weed since the 60s. Stuff brought back from Nam. Cambodia. And all the old killer Mexicans Jamaican, and Columbians. Panama Red.

I did from 97-2001 incarcerated. Had until 2009 for Supervised Release. The councilors said I had the most supervised release they had ever seen, or hear of...... Was out from 2001-2007, another partner ratted me out, got a State charge, violated my last 2.5 years of SR, and had to go back. Stat ran the 5-10 Class C Concurrent with the Federal Revocation, as the Federal revocation was 2x longer than it would be until I was eligible for parole in the State. 16 months and I would have been eligible for the state, but had 30 to do with the feds. So they let the feds keep me, and they didn't have to apy to house me.

But yeah, Ive been around.

That doesn't mean you would know these plants if you saw them or smoked them before. I've been smoking 50 years, growing 45 years and I wouldn't believe anything a bunch people I don't know, and want my money, to say. I'd want a whole lot more proof than "somebody said so "
J

It doesn't mean I don't either. Whatever, its not worth arguing over, and I used Strainly plenty of times, and got what I was looking for.

DD VA was also breeder of the year at Emerald Cup, so yeah, I trust both of these guys.

Been to the Emerald cup numerous times. I know more than a few breeders and a few Cup winners. Running MeanGene's cherry limeade from the cup winner a few years ago. Running Magnum Opus also. Never heard of Duke, but I'll ask my buddie in Laytonville about him.

Here we go, a voting sheet for Emerald cup, when it was still in Laytonville 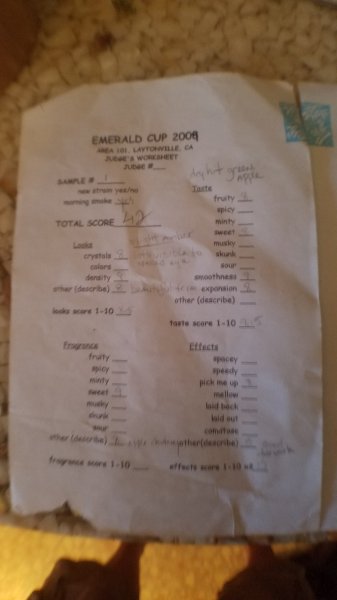 Hes been around a good while, worked with many people, and a lot of his stuff sells out in hours after is released.

He released 1000 packs or so of Local Skunk, and they were gone in 4 hours, at $150 a crack too. Many other strains he has also sell out just as fast.
His stuff is pure fire, and 1 pheno of the Granny pheno we kept beats out our pre 2000's- 90s Serious Seeds AK47, which is really hard to do. The Local, and Dominion Skunk are also super potent. Anything with the 89 Skelly/ 80s SSSC x Sk1 is pure fire, and very consistent.

He also extensively tests all seeds before theyre released. He stresses them with both light, and over/underfertilization

Hey Jimi, I was up in Laytonville a bunch from 2010 t0 2012 on Spyrock with Beans, I'm back east now and looking for some good seeds to start, anything you could recommend that would be fairly easy to acquire?
J

Hes also written a book with Mel, and is very active in the MJ community.

Im going to get this MALE crossed with Original 79 Romulan cut....90s White Widow....OG Kush.… Critical Hog for a start
S

Yep. I bought some of his 82 Durban
S

Id breed all those 5 Durbans together, and make as many seeds as possible. Those are killer IBL genetics. I wouldn't let those get away. He could have sold those for a lot more than $125 a pack too. He gave you $65 worth of seeds. Rare seeds.
S

Id breed all those 5 Durbans together, and make as many seeds as possible. Those are killer IBL genetics. I wouldn't let those get away. He could have sold those for a lot more than $125 a pack too. He gave you $65 worth of seeds. Rare seeds.
Click to expand...

burnin1 said:
For some reason Strainly has blocked my IP address.. grrr.
"The owner of this website (www.strainly.io) has banned your IP address (162.222.31.112)."
I have never had this happen with any website.
eff them
Click to expand...