Hi groovers,
I used to harvest my grass when it looked done. Then I discovered trich gazing. I bought a children's microscope and pulled off dozens of little leaves in an attempt to "read" the trichs like a shepherd "reads" the weather. I am a little bit wiser, but no expert yet. One says it's best to harvest the plant when a number of trichs-heads have started to go amber. As my weed is increadibly potent, I would prefer to be early than late. But not too early, 'cause it's a weak budder and puts most weight on at the end. The leaves are covered in trichs and f I take a leaf from just under the tops it has a fair number of very small amber trichs on the top side of the leaf but underneath and on the side they are still clear to cloudy. I have the feeling they are just starting to turn. They are plants I have often harvested at under 7 weeks, which they are at now, but have been outside in bright shade therefore a bit slower. My problem is I'm going away for 10 days this Friday, and I can't decide whether to harvest them before or not.
Any advice on that? Can the main side and bottom trichs still stay clear for quite a while when the few small top ones go amber?

Same decision problem with 2 Olés. It's actually called Olé 47, but I harvested the last one at 54 days with still only crystal-clear trichs. Very good, but I imagine it could be even stronger. These ones now are at 52 days. I could chop them right before I go and hang them to dry hoping they won't get too dry in 10 days, or leave them until I return at over 9 weeks. But once again the trichs are still crystal clear. Anyone grown Olé?

Well when harvesting you want to consider the potency and yield of the harvest and you say is it very potent harvested at 54 days and you say your at 53 now so I wouldnt worry about harvesting a bit early unless your worried about yield.

Then again.. you say that you think your harvest could be much more potent if left a bit longer so if I were you I would give it that extra week or two then harvest it. This is my grow philosophy if you know what works then try and find something that works better
G

Or--
You could harvest 1/4 every 3 days for the next 2 weeks.
Or 1/3 every 4 days.
You get the picture.
The advantage is that you get a slightly different high from each batch.
This helps avoid the "getting used to" effect that pot often has.
C

...a lot, guys . Insane, you just prove you'd be as indecisive as I am , and would split the harvest as I've sort of decided. GanjaGuru, you crack me up chum, how am I going to harvest every 4 days when I'm a 1000 kms. away looking for the Loch Ness Monster .

But back to trich gazing. Here's a photo from someone whose name I cannot read up the top which downloaded somewhere (so sorry for "borrowing", Mr. X, but all in the good cause):
http://www.marijuanapassion.com/forum/attachment.php?attachmentid=976&stc=1

Looks clear cut and simple eh, but anyone who like me has spent hours pulling off little leaves and trying to get them to stick to the microscope tab rather than my fingers, and then hours looking at the little diamond mine and realising that nothing in life is that clear cut. I have some amber trichs as of about week 5 of flowering, mostly the relatively few and small ones on the tops of the leaves, but "most" in the above reasoning is a very relative amount. I normally reckon the best time is when a couple of the hefty trichs along the ridge underneath start turning colour. That might seem a bit perfectionist, but I reckon "if it makes a difference, go for it". Imagining for a moment an upward curve of THC that peaks and starts to decline (quite rapidly, I believe) and a slightly upward curve of undisired cannaboids that goes much steeper at the point where the THC dips.... well, obviously there is an ideal moment/day to harvest the plant, and so go fot it! I can imagine it might make 10-20% difference and who wouldn't go to a lot of trouble to boost yield by that much.

So the difficult choice has been made. 1 Olé and 1-2 Pearls get harvested before I go (tomorrow) and the others when I get back in 10 days. The Pearls are in small 6 ltr. pots and are really juicy. One has grown 1,50 high and will produce about 20 gm. of the best grass in Paradise, void of any leaf. She's already loosing her fanleaves through lack of nitrogen so the choice is easy. Only problem is I like to jar juicy like GG and 10 days hanging could see it too dry but I'll have to get my gf to come and turn the fan off after 2-3 days and roughly strip them and jar them after a week. Try to get some pics up tomorrow, the ones I have are too big for here. 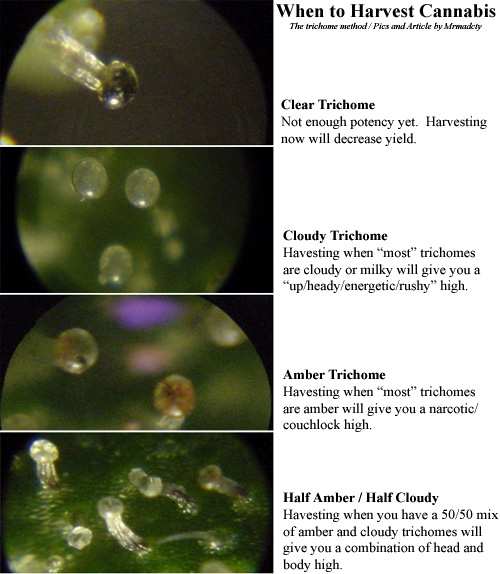 ... we did get a couple of sightings of the monster, but couldn't get the camera out in time . But I did say to myself, whilst rolling the 3rd. "Welcome to Loch Ness" spliff, who needs weed when one has all this beauty and tranquillity?

Lots of amber in there, but as explained above, that was the tops of the upper leaves. The weed which is now dried and jarred is very good, not too couchlock but strong surging head high.
I may have done better to chop the lot before leaving however, as the others were a few days behind this one, but had been going a long time throughout the summer and I came back to find this on some trichs:

Black trichs, now that's something new. Doesn't seem to be decaying in any way, and they put on even more resin in those 10 days, now chopped and awaiting prolonged testing

Here, for any advanced trich fanciers, is a pic of a leaf off some cured Pearlette that I harvested quite early when the trichs were cloudy.

I wanted to know if the trichs would change colour when dried. Well they did, though this pic exagerates the colour intensity somewhat, to a beautiful opaque pale pale amber, like some quartz. Another intersting thing to note is that the vegetable matter has dehydrated to almost nothing, whereas the trichs stay virtually the same (?), so now the pic just shows a thicket of resin glands.
I've got 100 gms. of little leaf resin forests like that, so about to take the plunge (literally) with some ice hash. Tried the dry shaking method and it was very good, but am hoping this will increase purity and yield.

The trich gazing will continue with this plant just coming up to maturity:

Jack Herer, pretty nice plant, seriously weight trained, flowered outdoors. This is what happens when you have to grow sideways: lots of pretty chunky nuggets. Probably the stickiest plant I ever touched, even more than my Pearlettes, though the high could never beat them. But I reckon it will go a bit "balsamy" and very tasty if I let it go to the edge, so some serious trich-gazing ahead. I'm really starting to believe in it, and as there is a best moment to harvest plants (depending of course on what you want from them) I want to be able eventually to spot it by instinct watching the trichs that from one day to another seem the same. Like clouds and a shepherd who can read the weather out of them. 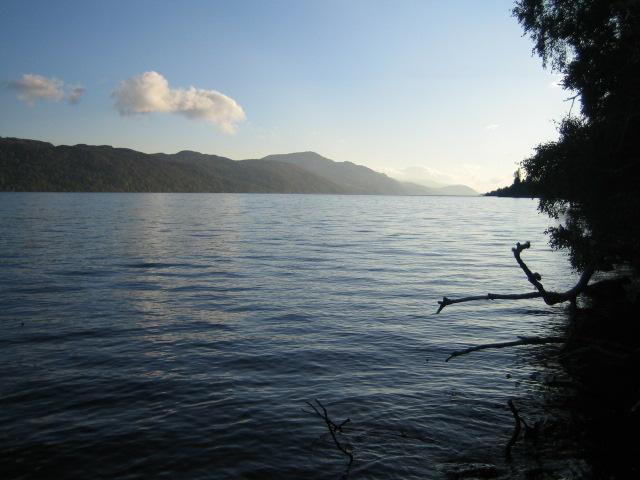 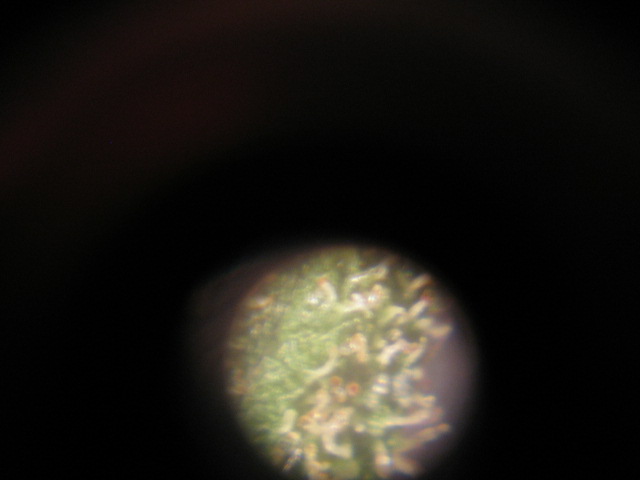 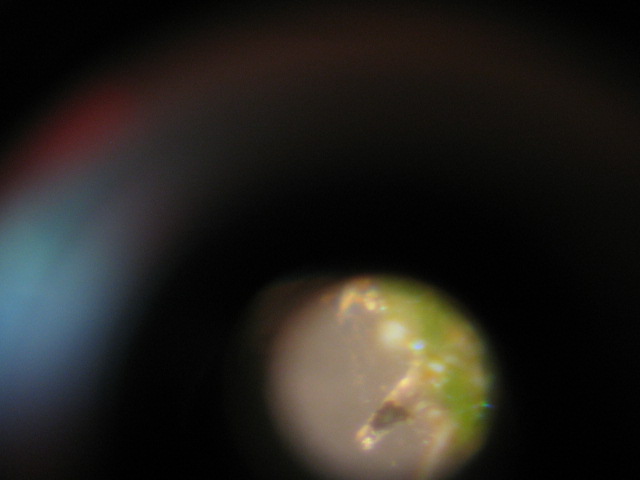 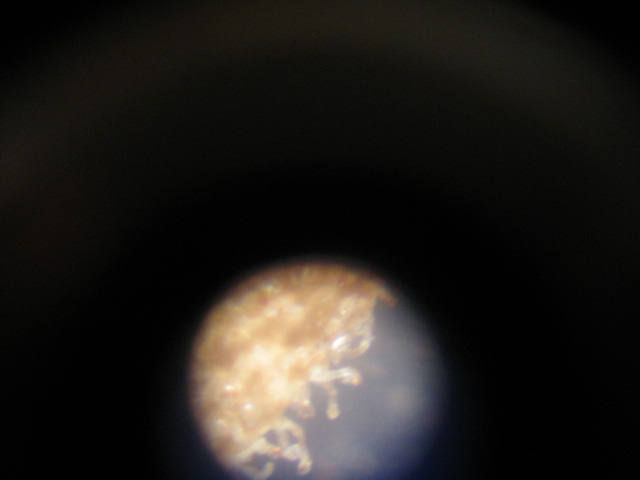 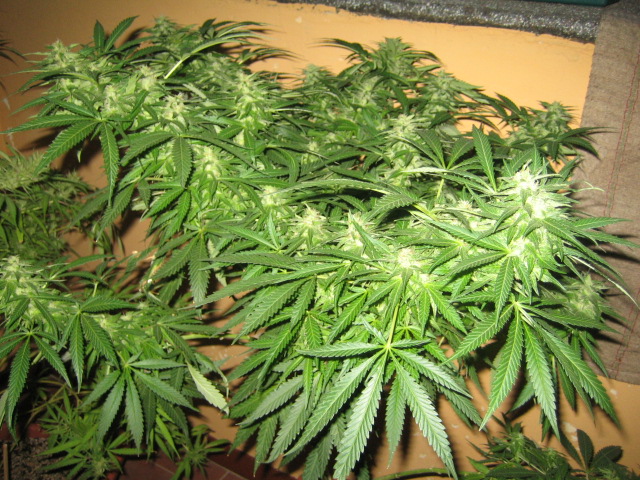 I think i had a dream about that lake...
C

are there NO fellow trich-fanciers in this forum??¨