Does this look done?

Hi everyone. I have a young friend and he started a plant from some bag seed back in early December in a pot outside in his back yard. ( Florida) . Well about a month and a half ago he called me to come look at it and it was covered with white hairs.. The plant was started in December so being that the sun cycle is at its shortest I am guessing it just went to flower with very lil veg growth.. The plant is only a foot high. if that and is more bushy than tall... today I went back over to his houes and then he goes on to tell me it is covered in some kind of insects which I really didnt get down and look to see what they were. ( even if I knew) anyways does this plant look fairly ripe to you all? it is nothing but say 6 or so colas and I didnt have a magnifiing lens with me.. Thanks Hero 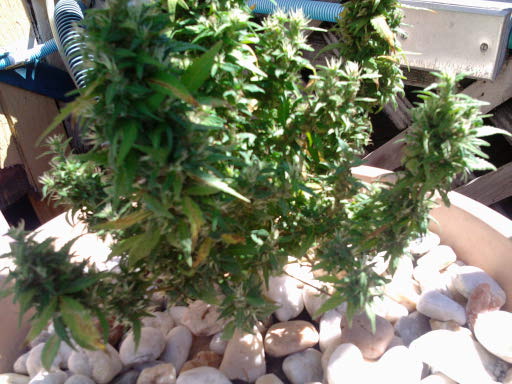 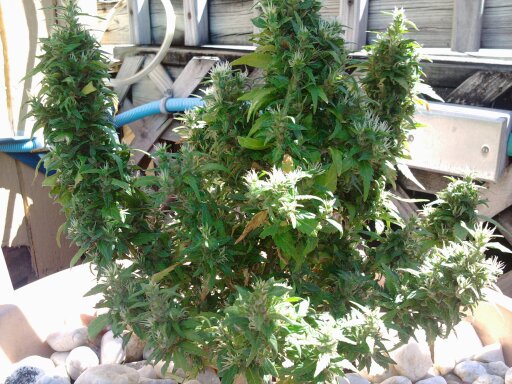 I can't see any trichs but when I click on the second pic it looks like the pistils are still all white and none have begun to turn amber so I would say no. The plant is very small for having been growing outside for 4 months. Maybe it was flowering and then went back to revegging. I can't really tell without closer pics (sorry). I also don't see any fan leaves at all on the plant, just the leaves coming off the buds, were they removed?

BUGS?! :holysheep: I hope for your friend's sake it is not mites.

Well he isnt a serious grower.. smoker yes.. grower no.. he is young 19.. He just wanted my opinion and to be honest up close it looks ready to me but then again.. I am not experienced enough to know.. can u copy them save them and open them up in windows media? That way maybe u can magnify..
D

hard to tell how far along it is, but its definetly not done
L

Sorry but that plant is a mess lol..no fan leaves and it might even be reveging...no way to tell if she is done with pics from that far away...wld need some up close shots. She looks like she lived a hard life...
T

These are a long way from ready, IMO. The days are going to keep getting longer until June 21..this is not favorable conditions for flowering. I'm with orangesunshine, you need a 12/12 light schedule if he wants these to finish before fall. I am pretty sure that lengthening days are going to cause reveg.

NO she started reveggin and I told him to cover the plant up when he gets home from work 6 pm to continue the flowering process,. thats was like in march so he puts a tarp over her. It is all colas. lol infested with some kind of bugs I guess I will tell him to just keep on letting her do what shes gonna do.. lol Thanks

Thanks I doubt he will go that far.. He is a true weed head in every sense of the word but he isnt into doing much in cultivation quite yet..Part of where he lives. his age. resourse's I guess, He will probobly harvest her.. shake out the bugs and blunts away. lol
T

IMO, Just putting a tarp over the top is not going to do it--that isn't real darkness and the trapped humidity is always a problem when doing something like this..

You gave a plant to a kid that lives with his parents? He tells you that they are aware of its presence? Are they aware of the consequences if HE gets caught?

It looks to me that the plant has already started to reveg.

No HG it is HIS plant stop trying to judge and fine happiness within. When I am constantly judging others I am truly unhappy inside Hero
D

i cant speak for THG but shes not judging, she is advising you, and she is only going off what you have posted.

you have judged her, so by your own standard you must be truly unhappy inside.
T

I am only concerned for the well being of your friend's parents. If he is busted with plants growing on their property, their liberty and their home are at risk.
R

THG us spot on there!
L

hero4u2b said:
No HG it is HIS plant stop trying to judge and fine happiness within. When I am constantly judging others I am truly unhappy inside Hero
Click to expand...

Really? I wld hate for you to be friends with a child of mine...can you say poor judgement?

The Hemp Goddess said:
I am only concerned for the well being of your friend's parents. If he is busted with plants growing on their property, their liberty and their home are at risk.
Click to expand...

i'd like to know in what state there gunna take someone to jail or their house for there 19 yr old kid growing a plant in the back yard. (i understand the 19yr old may go to jail) he also said the kids parents knew. if the cops in that town have so little to do that they go bust someone for one plant... sounds like a peaceful place to live.


this is a pot growing forum and i'm sure not all of the people here are from the 15 medical mj states.... i guess the outdoor forum should go huh cuz thats almost all illegal growing.

"Most" states have confiscation laws on the books..and it matters not, if the owner of the property had prior knowledge or gave permission. They are not 'usually' put into play over lesser felonies. But that certainly doesn't mean that it can't be used.
I was in my late 30's when caught "cultivating" on my late parents ranch. The confiscation laws were used as a "tool" to pressure me into a plea bargain.
"You plead to this, and we won't go after that"..
It is the DA's prerogative to use it or not.

"almost all outdoor growing is illegal????" :rofl: :rofl: :rofl:....
hmmmm... this is a pot growing forum formed to help folks learn how to "provide for themselves" whether in legal med states or not.. Maybe all the self proclaimed commercial "suppliers" should be the ones to go.....:rofl:

Maybe all the self proclaimed commercial "suppliers" should be the ones to go..
Click to expand...

I'd be cool with a stand at the farmer's market LOL Next to the old timer with the best tomatoes. and no taxes...just locals providin for locals. and of course can't forget the moonshiner...he'll always be stuck selling out the back of the car tho...the poor guy. Southern Women can't stand us country boys gettin into the shine LOL
You must log in or register to reply here.
Share:
Facebook Twitter Reddit Pinterest Tumblr WhatsApp Email Link