Hey all! So I started growing again about 2 months ago. The last 2 times I grew just a single plant for the sake of trying it out and seeing how I did with just the instruction I could find for myself.

Both original attempts worked out quite well. Unfortunately I don't know the names of either of their strains.

One was from a seed I had found in a particularly potent bag I had once. I used only organic fertilizers like blood and bone meal, with worm castings. The bud was on the dense side and I didn't realize it's a lot more difficult to flush out fertilizers that are mixed into the soil and not dissolved away and absorbed.

The second I was given by a friend after he had grown it under a vegetative fish tank light for 12 months, which I ended up just flowering after a week of adjusting to proper lighting under a 1000w MH (I know a bit strong for just one plant, but I use it for more now This plant I had a problem with Powdery Mildew, but It was kept under control very quickly with a mixture of Baking soda and water, and match burning.

Ok! So for my setup I have: 1x 1000w MH magnetic ballast 1x 1000w Electronic ballast (running 1000w HPS bulb currently at 75% for 3 flowering plants. when I run it at 100% the bulb starts to scream at me) with variable control, 1x 25lb co2 tank/regulator (still don't have a controller though so I'm just trying to use math as best I can for the space I'm using), one maverick sun air cooled shade, and one plain old batwing. My reservoir is a 50gal fish tank constantly aerated and 2x 55gal drums (not being used yet)

For this round I started out with 8 seeds from the Vancouver Island Seed Company in BC, germinated in a wet paper towel. After they started to sprout I placed them into seedling pucks that were soaked in a very weak nutrient solution. They were placed in a little growing dome under the 1000w MH and moistened as the pucks became lacking in moisture. About a week and a half after this they looked ready to be transplanted into bigger containers. I started to see root poking out of the sides of the pucks. All 8 were placed into 5gal pots with ProMix HP soil, and placed under the same 1000w MH light.

I didn't start taking pictures until they were about a month and a half into the whole process so you'll see what the progress has been from about week 5/6 onward. Also since I started and then ended up having a lot of other obligations pop up into my schedule I didn't get to pay as close of attention to them as I would have liked, but hey, it's the holidays. I Just couldn't wait to start them

This is my first time using liquid nutrients, so I'm using a simple drain to waste routine from General Hydroponics FloraGro/Micro/Bloom on a 12 week cycle with what looks like might be an extra week added into flowering.

The seeds I had were non-feminized, so 5 of the 8 turned out to be males, and were removed after the first week of flowering, leaving 3 lovely ladies (or so I thought!) behind. Well it turns out there are a few male flowers that I found on the lower 25% of 2 of the 3 plants.

I removed as many of them as fast as I could find them as carefully as I could, and turned off the ambient circulation fans in the room in hopes it will lessen the spread. I've resided myself to the fact that there will most certainly be a few seeds in this batch because I can't eradicate every bit of pollen from the flowers. It doesn't look like a rampant enough problem to completely ruin the batch anyway. Besides I love seeing them grow either way. It was hard enough to get rid of the males! 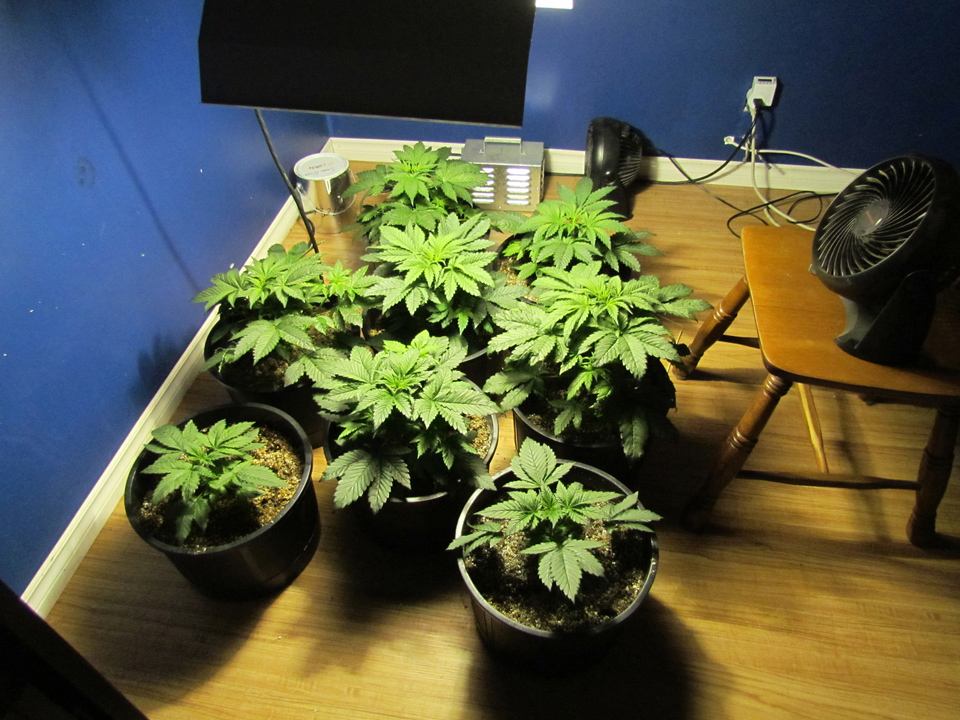 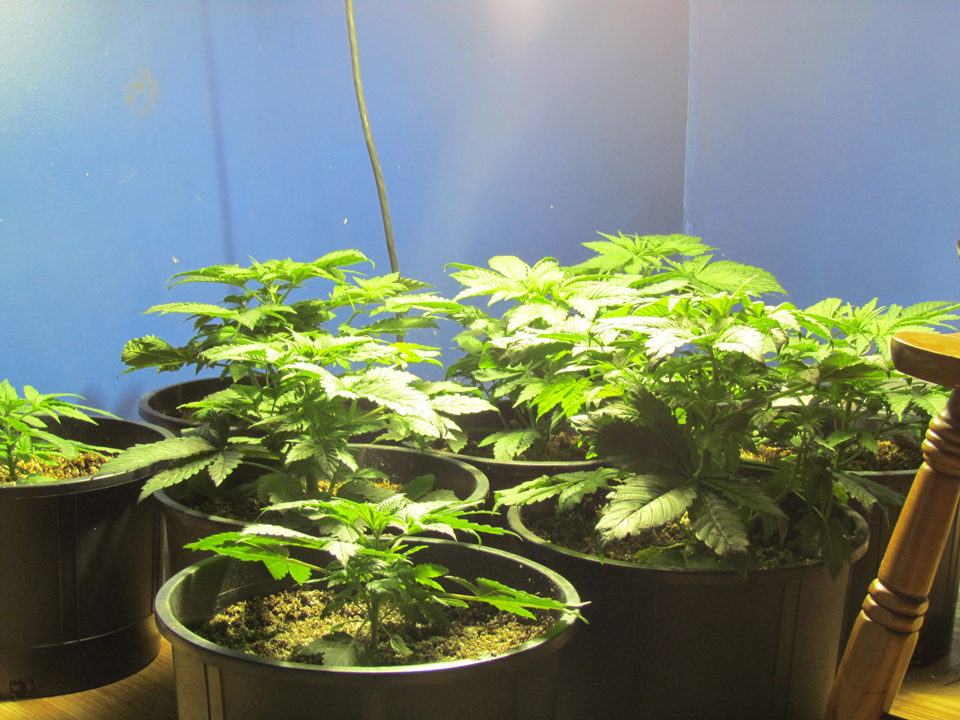 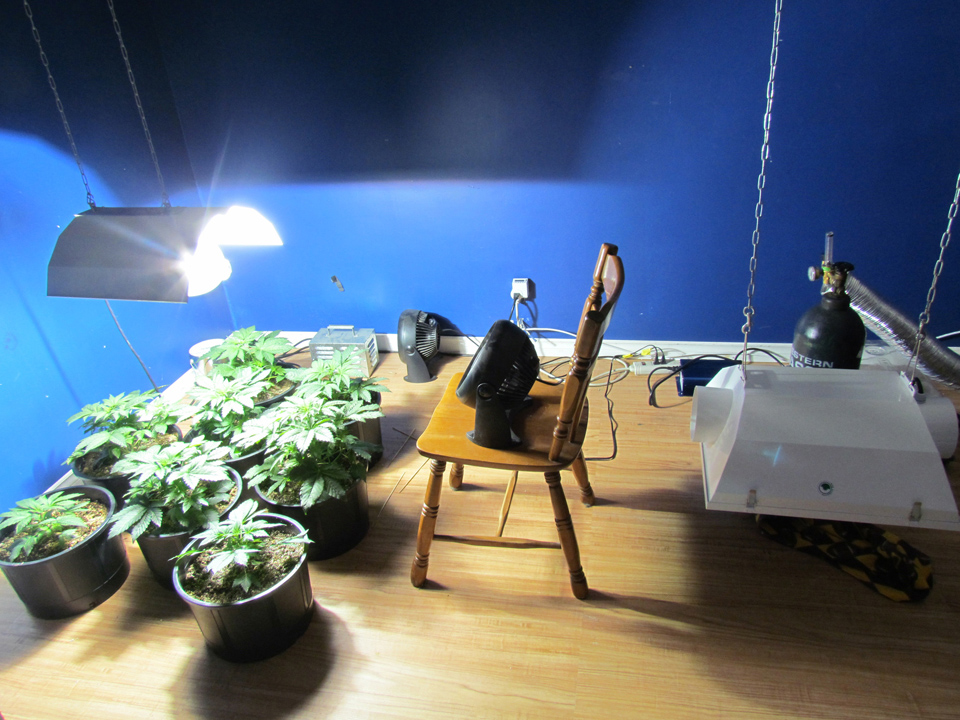 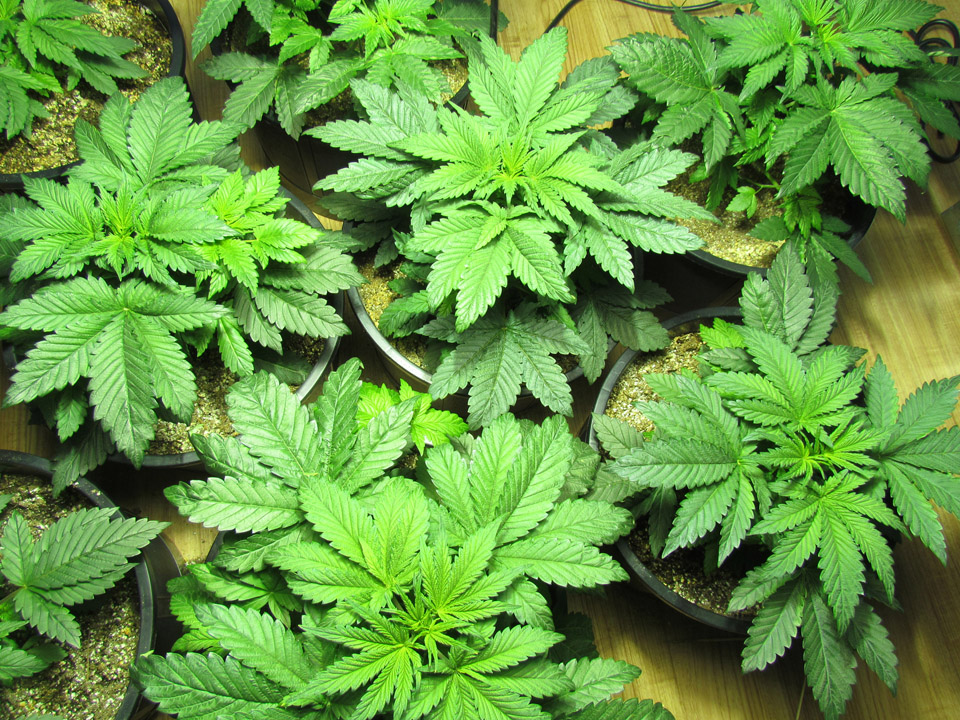 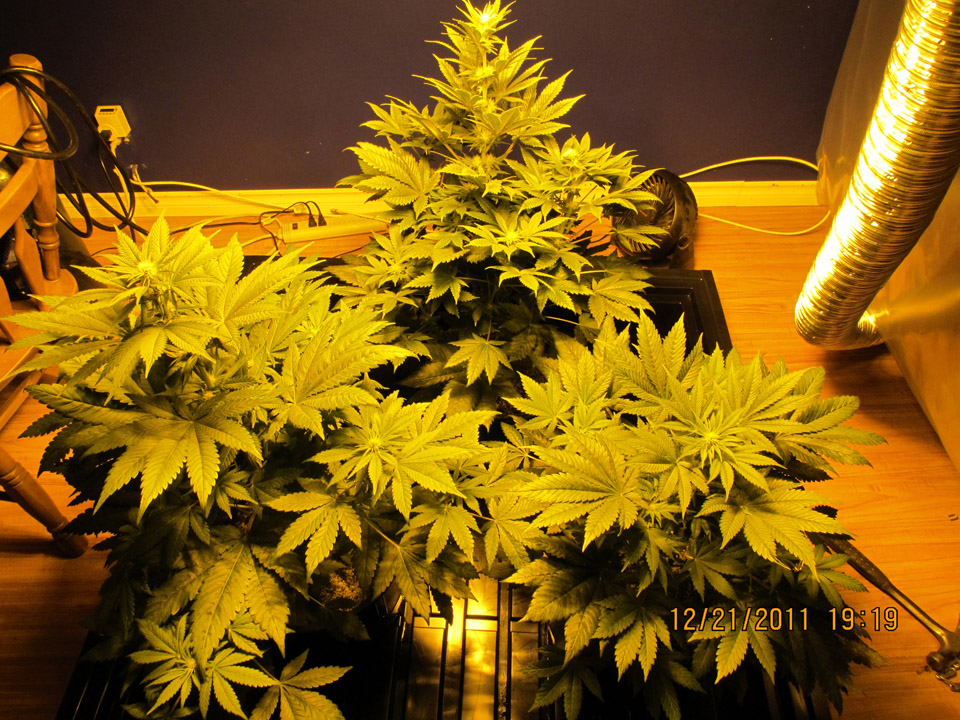 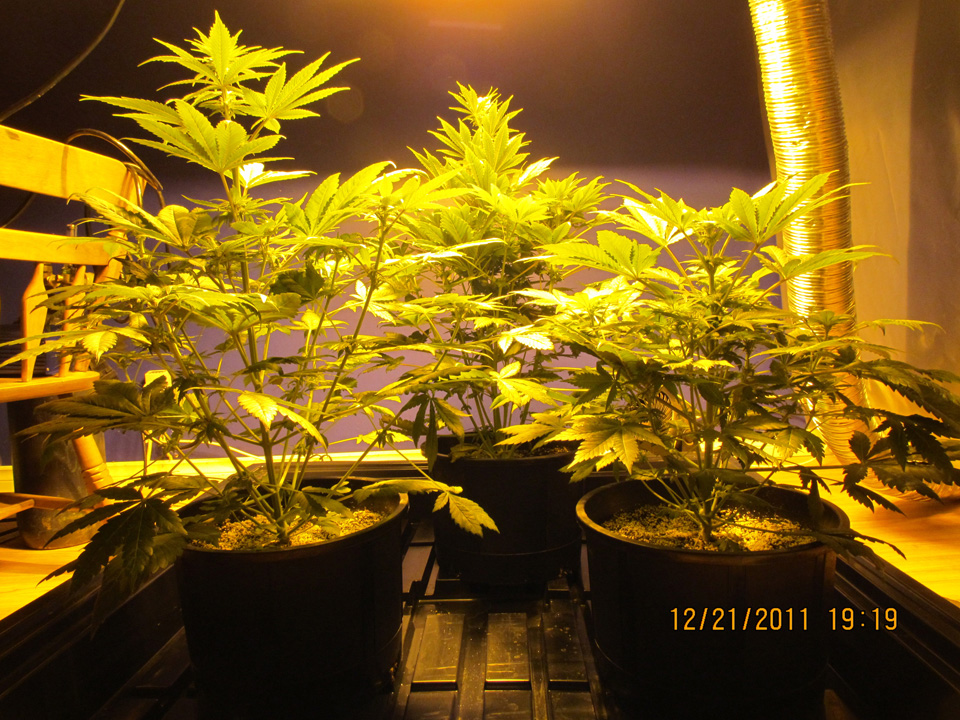 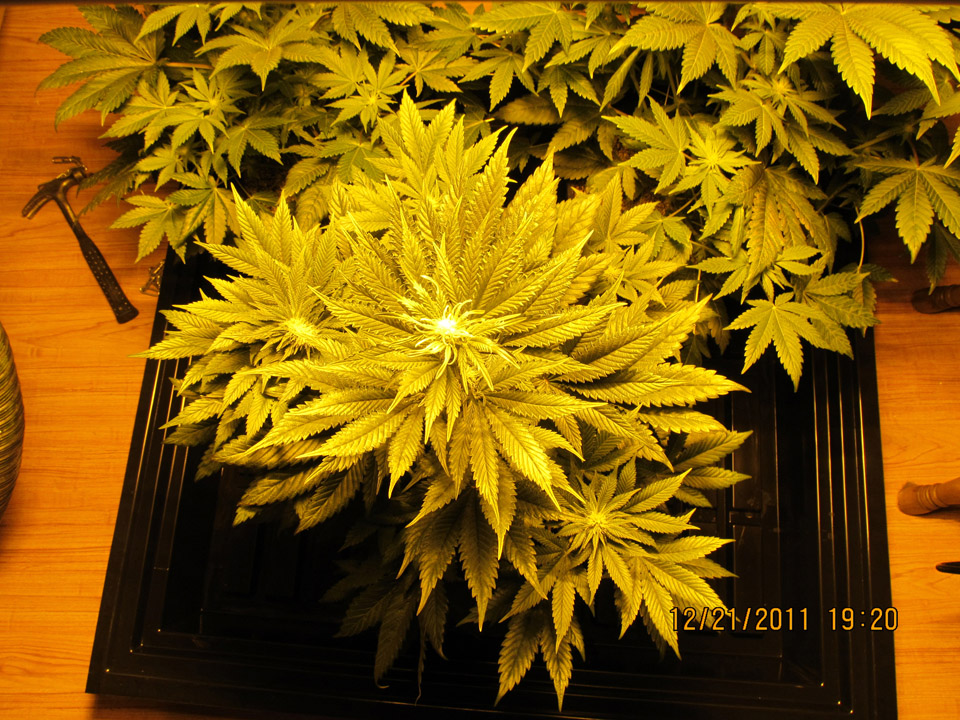 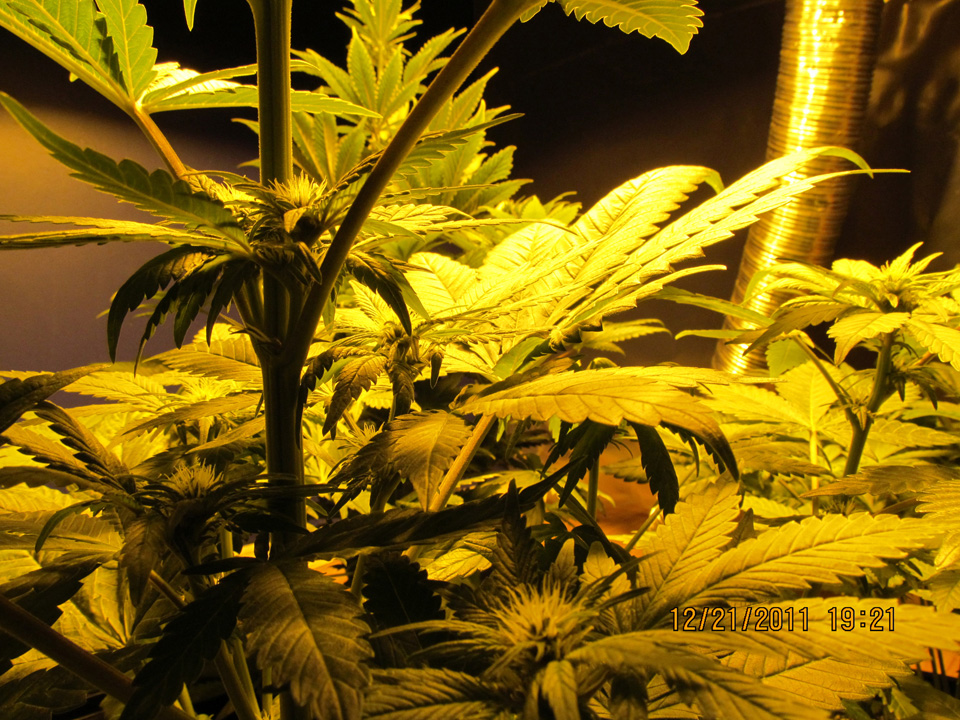 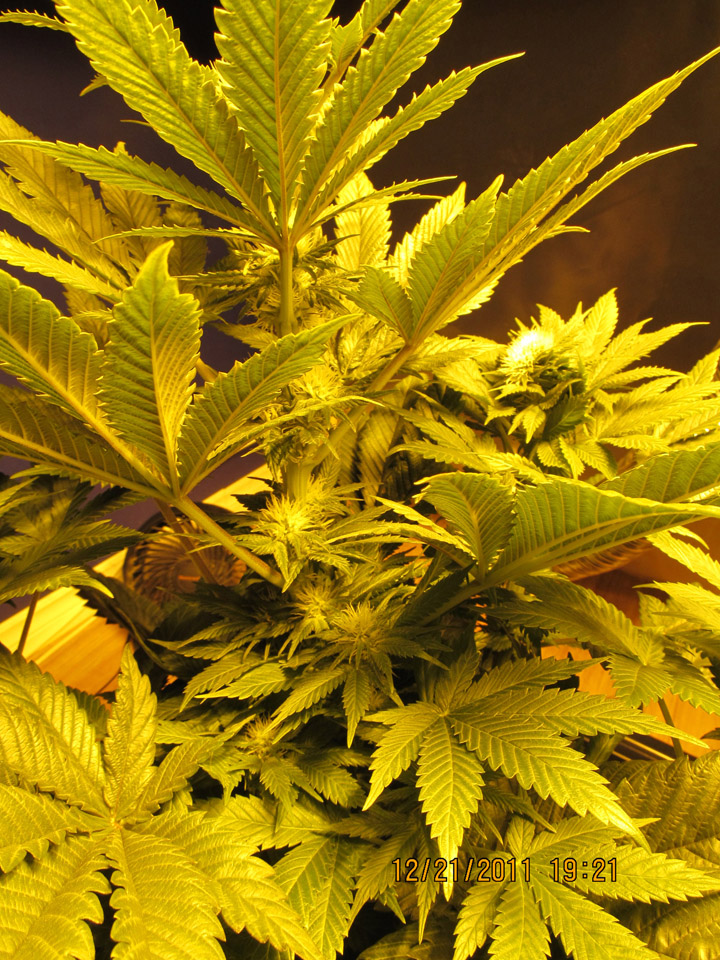 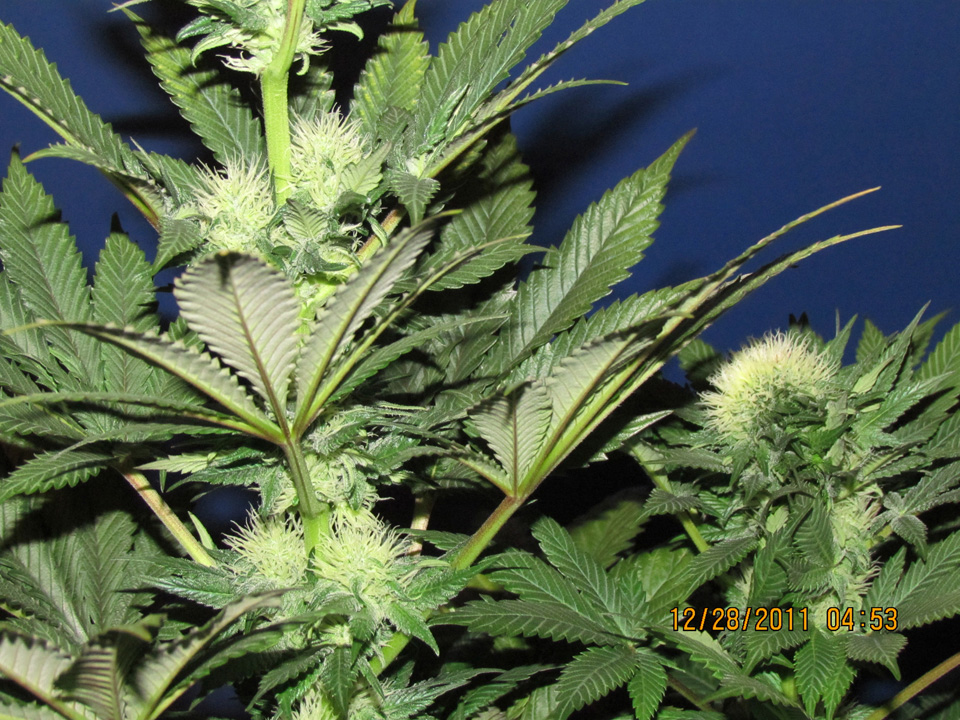 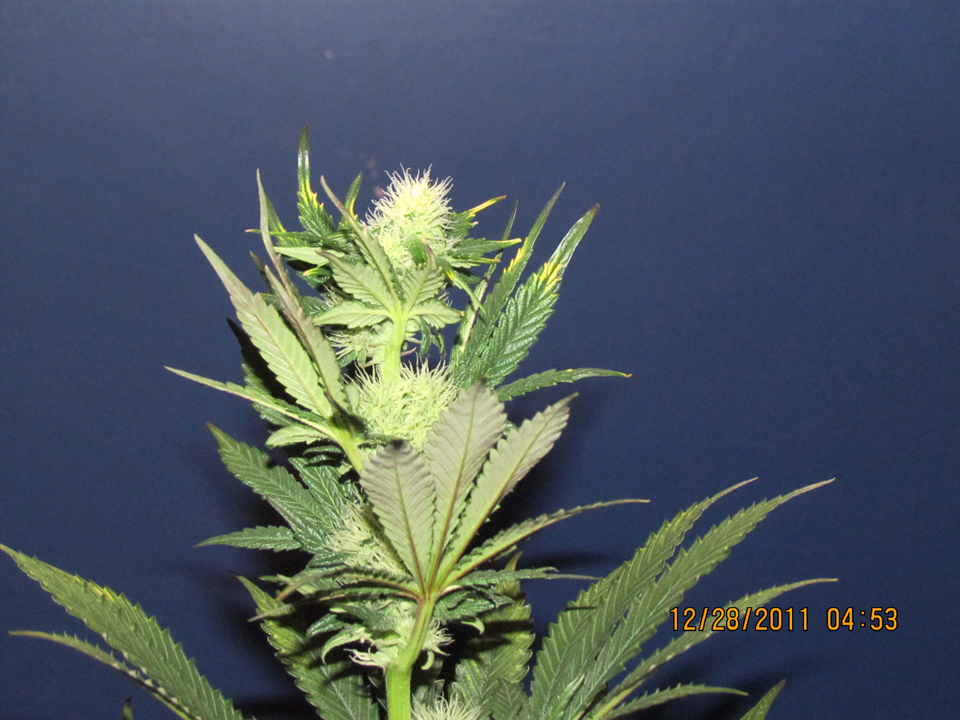 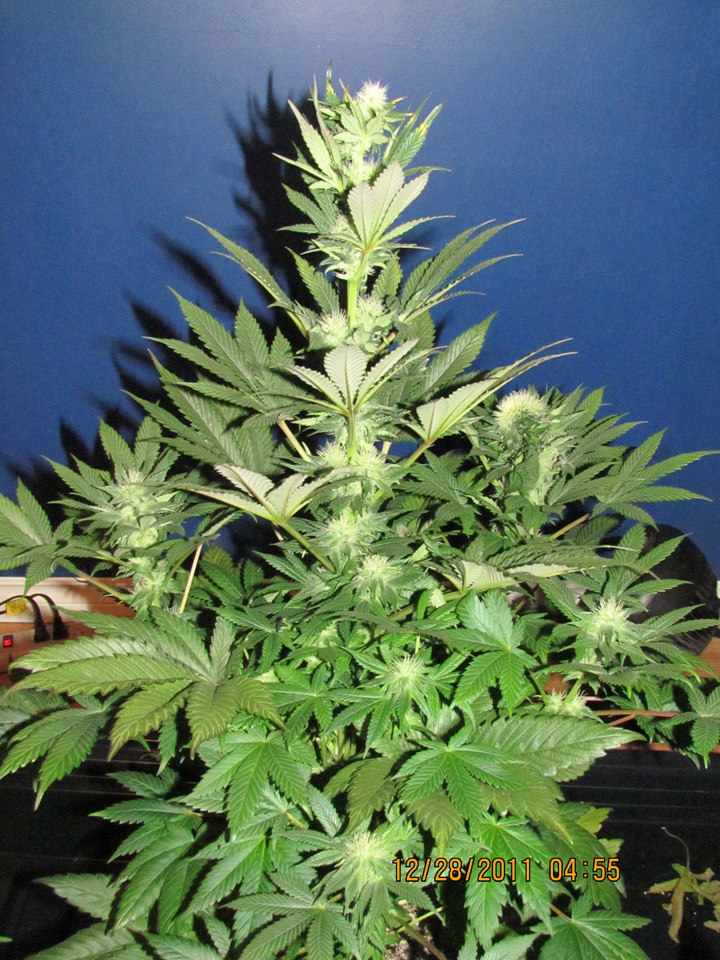 The first 4 Photos are from Veg, the next 5 are from when I started flowering a couple weeks ago, and the last 3 are from tonight.

They grew so fast I ended up with a bit of heat stress on the top of one before I realized I needed to raise the light. and there's a bit of nutrient burn on a couple of leaves otherwise They look pretty damn good to me

The stalk that bud is attached to is a strange shape also, it's VERY wide compared to even the main stalk of the plant. Almost like on of those really thick cherry twizzlers.

Time to rotate them!

Here's a picture of my reservoir and the rest of my setup not on the other pictures. I think I said it was a 50gal tank, I think it might actually be 35gal, I don't actually mix in it, I measure out what I need into a the bucket so I know exactly what I need to mix. One of the little clear jugs is for plain water, and the other is for nutrient solution. 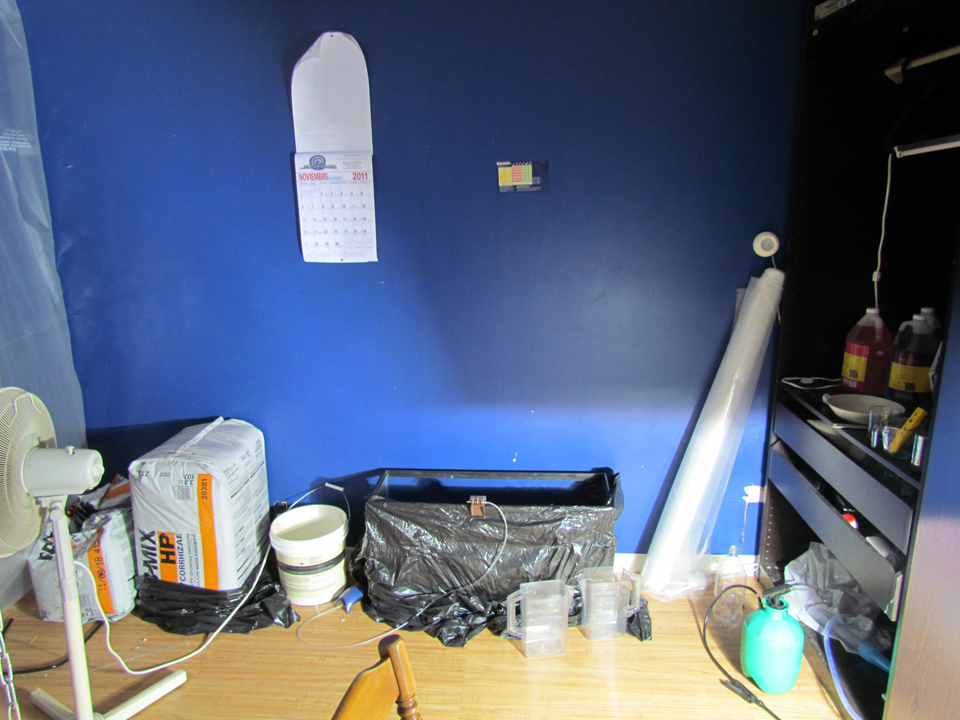 Looks good! You should really really think about mounting those ballasts on the wall and get all the electrical off the floor. Couple simple staples and zip ties go along way. Can be very dangerous.

nouvellechef said:
Looks good! You should really really think about mounting those ballasts on the wall and get all the electrical off the floor. Couple simple staples and zip ties go along way. Can be very dangerous.
Click to expand...

good call......we should all safety check our grow areas.

The ballast on the floor is sitting in a container so it can't get wet but I'm gonna be moving everything soon and I don't want to put too many holes in the wall inside. The new space is much nicer for growing and i will be mounting the ballast on the wall or making a shelf as soon as the new space is clear. Also the other ballast is up on the chair you can see in the photos now, so it's up off the floor.

Thanks for the input so far all!

Kool. If available at new spot. Mount ballasts outside room. Will help greatly when summer heat rolls around.

I can't paint inside my house but I never really planned on using the space for as long as I have so far. The new space has walls I can either paint flat white, or put up something reflective. I'll most likely go the route of painting, I have an abundance of flat white base coat from renovating recently anyway. It also has a separate breaker box from the main house

I don't have any outlets close enough to place the ballasts outside(the room is separated from the house entirely), plus the magnetic one is noisy and attracts a lot of attention, but that is a good idea. Thinking about it though, I could probably put them under the floor in the open rafters of the garage underneath it.
T

I would be for trying to figure out why 2 out of 3 plants hermied....

I'm not too sure how to go about determining the cause. Any wisdom to depart on me? I don't know the general causes of it. I've grown females in much less ideal conditions in this space before, so any ideas as to what could cause this sort of thing would be helpful, then I can address possible contributing factors that may be present in my room.

Edit: After a little bit of reading I think the cause of the problem may have been due to light leakage, mainly a problem because the room they're in has the main water valve and breaker in it so the door gets opened and someone forgets to close it.

Hey everyone! The purple is starting to creep more and more around the plant, it's looking more beautiful by the day! I took some pictures today i'll toss up. The buds are growing like crazy and by the time they're ready to harvest it should be quite bountiful!

Judging by the pictures below, how long would you all say I've got left before harvest?

Keep the comments and input coming! 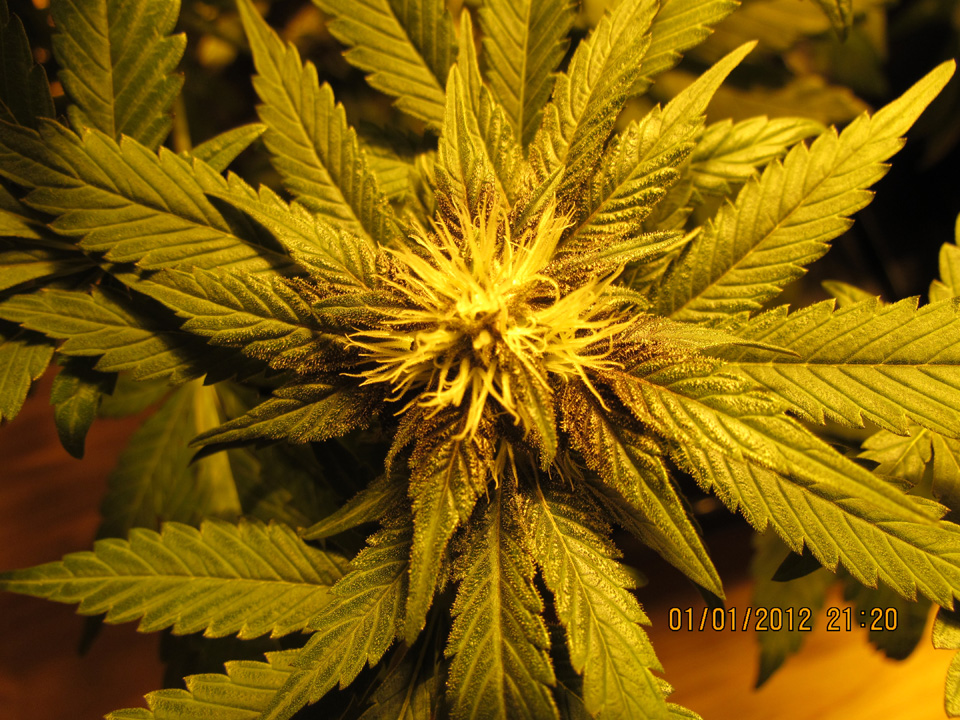 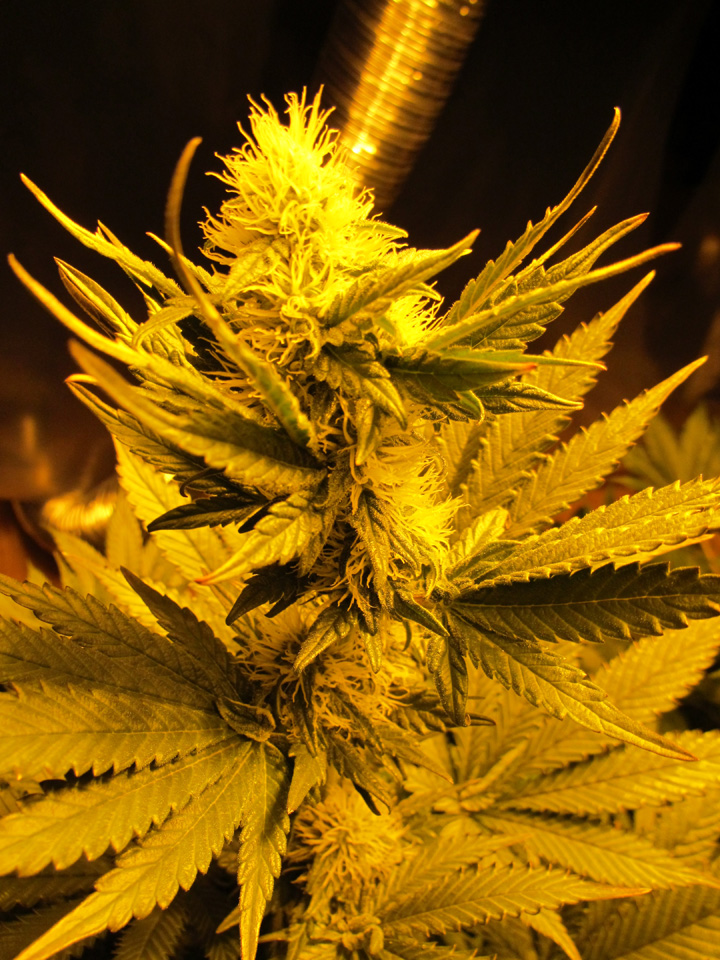 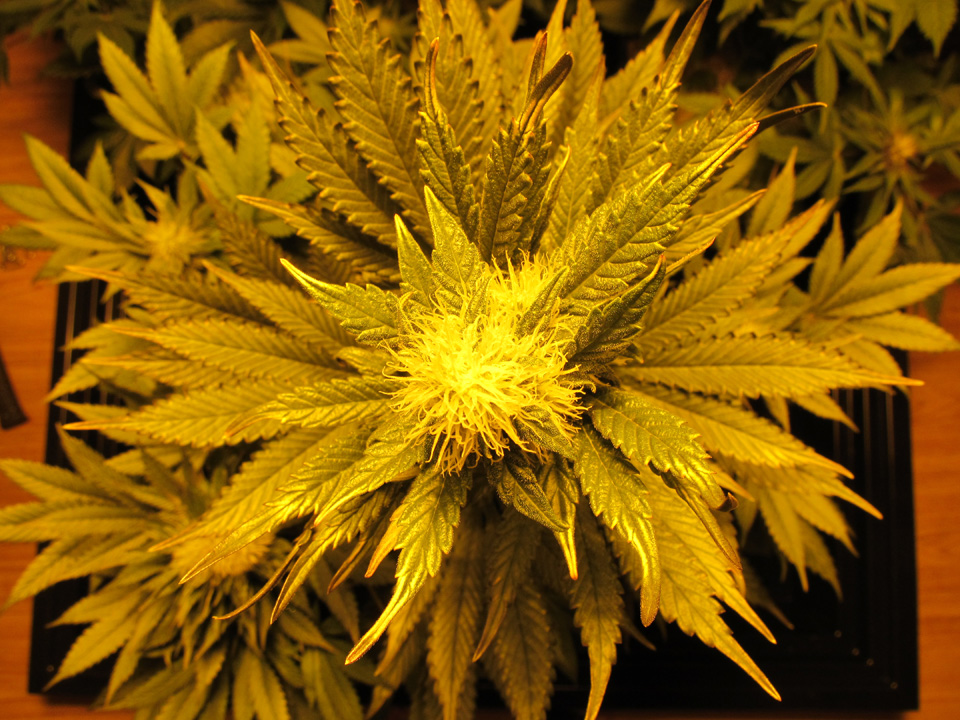 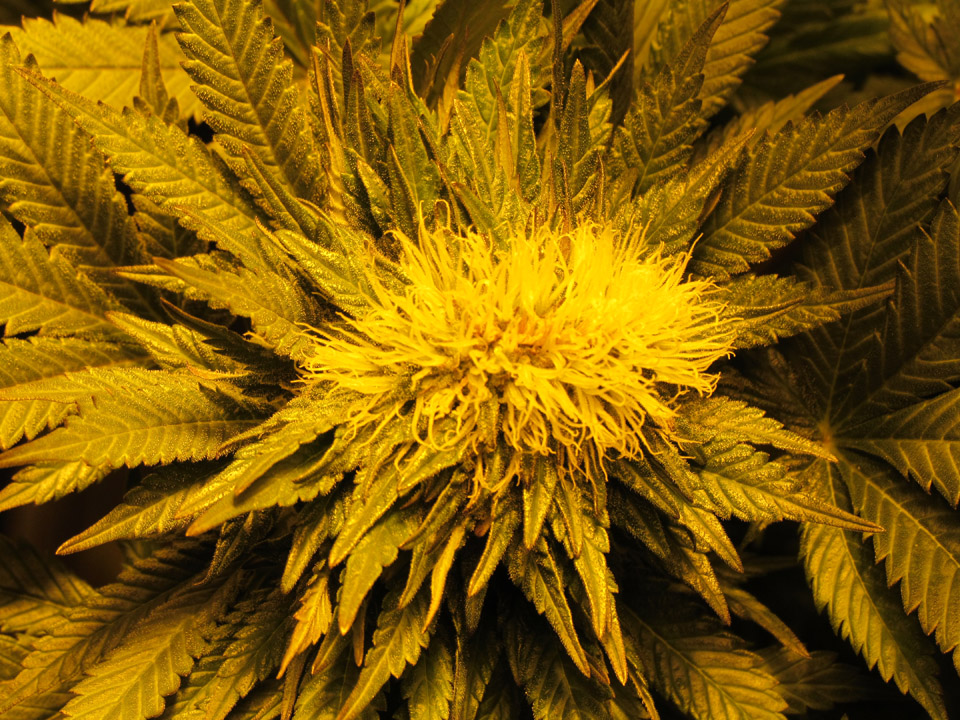 Thanks Powerplanter! I'm really excited about them. Ever since the first time I got one to grow it's been a fascination. I like to just sit there and watch them for an hour or so, sometimes I'll play music for them or talk to them.

I trimmed a few fan leaves off today to let them breathe and let a bit more light through as well.

I know the feeling. I haven't been able to grow because of this s#@ty state so I live vicarously through some of you guys. When Ohio get's the MMJ petition on the ballat I will take all of the knowledge I have acquired here and run like hell with it. :hubba: LOL Just wondering, but I have heard that trimming the fan leaves is not good. What do you say? Anyway, enjoy your grow, as I will. LOL :icon_smile: :icon_smile: Take care and be safe.
T

PartyBro420 said:
Thanks Powerplanter! I'm really excited about them. Ever since the first time I got one to grow it's been a fascination. I like to just sit there and watch them for an hour or so, sometimes I'll play music for them or talk to them.

I trimmed a few fan leaves off today to let them breathe and let a bit more light through as well.
Click to expand...

Trimming fan leaves is a no-no. Fan leaves are where all the photosynthesis takes place.

A close friend of mine that has been growing for close to 30 years now said he has great success towards the end of his flowering cycle when he trims a few leaves, and actually physically snap some of them as well as a way of i guess causing the plant to feel as if harsher conditions are coming and to put as much of it's energy into flowering as possible.

I didn't go crazy or anything, I took off probably about 12 leaves between the 3 plants. and perhaps I'm using the wrong terminology. They're not huge leaves they're the small ones that are just cluttering up the inside areas.

Any thoughts on that?
T

Sorry, but IMO that is another one of those myths that is not true. The same goes for driving spikes through the stems and giving a week or 2 of darkness. There is really no proof that doing any of this makes for better bud. Through the years I have tried several of those methods that are supposed to stress the plant into more resin production, but have really found nothing like that makes much difference. Giving the plants optimum growing conditions with as little stress as possible gives the best bud, IME. I also have been growing for over 30 years.
You must log in or register to reply here.