roots growing out the bottom of 5gal bucket

anyone ever have this problem, i moved the plant and notice the roots are actually growing out the bottom of the 5 gallon bucket.

think i might know what caused it. i had it sitting on a towel after i watered it since i didnt have a catch tray big enough to catch the little dribbles still coming out of it. so the towel was damp for a couple of days i bet.

do you guys think it was just the roots seeking out the moisture in the towel?? 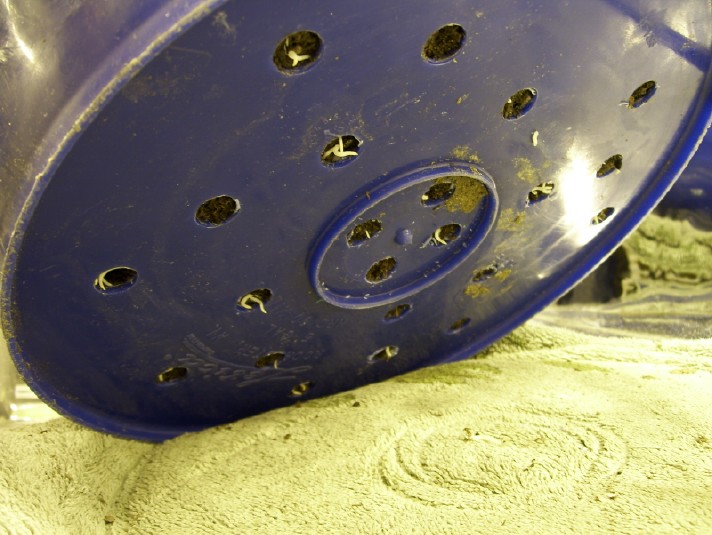 I have the same problem. My plants are three weeks old, in 2 gal pots and already the roots are coming out the bottom. I think that this is normal. I notice it happens when I let the pots dry right out. I think the roots dig down looking for more moisture.

funny thing is my cheapo moisture meter tells me on the 1 to 5 scale it shows that the soils is as wet as can be. but i didnt like this soil and i wont be using it again cause i dont like how it doesnt let the water drain very well.

its mixed with 50% soil, 50% peat moss, and perlite mixed in too and it still dont drain worth a rats butt. as much as i hate to say i am pretty sure i am going back to the MG soil, i actually like it. its a no brainer soil if you ask me, dont give it nothing but water thru veg, and its moiture level is great.
A

I use Mg Organic and it been working great

i usually use the MG seed starter to get them going, its got a lot more airy soil mix and less ferts so its a little easier, then when i pot them in big pots i like the MG moisture control.
this new soil i got is 50% organic compost, 35% peat humus, 15% sand and perlite, which sounded great, i ripped open a bag and peeked at it before i bought it and it looked like great soil. i come home throw it into a pot and add some water and i had a 5 gallon MUD PIE, and when i say mud i mean sloppy nasty mud.
so i then bought some more peat moss and spent a hour mixing and mixing this stuff 50/50 and its still was like mud and didnt drain worth a crap.
give me the no hassle frills of MG soil anyday over that crap. with MG i put it in the pot, water it down nice, let it drain good, and put my plants in, no hours worth of having my elbos into a pile of dirt.
You must log in or register to reply here.
Share:
Facebook Twitter Reddit Pinterest Tumblr WhatsApp Email Link