um. so. Day 12 of bloom SOME of my flowers look like this ... and Some look like this. I think I see a coupla 'nanners on that sum'bish too. Sorry pics taken with the lights off. Whack 'em or keep?

Kind of hard to tell from the pics. Get some more close up.

oldfogey8 said:
Kind of hard to tell from the pics. Get some more close up.
Click to expand...

Thanks OF ...
three plants have wispy tendrils all over and three have what appear to be male flowers clumped together at the top with more male flowers, on a stem, going down the branch. maybe these show it better, maybe not. 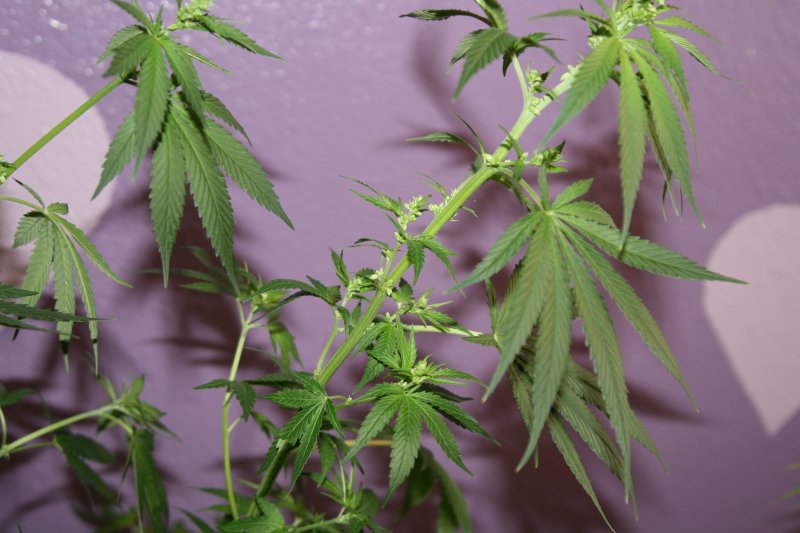 They certainly look like pollen sacs to my uneducated eye. I don't have one of those new fangled, smart(so-called) phones and I'm using an old digital camera that won't let me get close enough for details. Okay. So. At the six week vegging point in time I was positive all six were females and I vegged all six for two more full weeks. However ... I had one LED bank then. It went TF out (!) ... just quit. Four days later my new lights arrived and I began vegging with TWO, 1000W LED. They took off after that and have climbed.
So, Lesso, from the sorry pics I posted .... 100% male? or transformed? do you think? These were not store bought beans so the 50/50 sex option math would make sense ... but what do I know.
Okay. So. Snatched. and, Boy, HOWDY! do I have enough room NOW!
Thanks Again, All
bj

Im certain thats no herm. They were male from the get go

I agree with gloman and lesso. Deep six those guys.

Hey Thanks, Fellas. That's exactly what I was afraid of. I heard crying sounds when I tossed those rascals on my compost pile out back. Turns out it was me, snubbin' and blowin' snot bubbles. C'est la Grow, huh.
Thanks Again,
bj