Howdy dudes! New to site, not to grow

Hi all! Yet another newbie here. In a legal state. I restarted growing recently after a 6+ year absence. It is lovely to be back!

Growing was actually introduced by a parent (stumbled across theirs as a teen & believed he was growing tomatoes - yes I was naive), who is a first generation grower. Hippie generation, but was not a hippie himself just a stoner, tried and true. I’m in the midst of a wealth of grows and projects, started in May. Being a second generation grower from years back we were just seeing LEDs hit High Times when we stopped growing, so a lot has changed! That’s partly why a I wanted to join a forum - I love lurking and reading on new techniques, items, etc.

We had three 1k watt HIDs - two were taken out of commission when I restarted & fully took over, in exchange for a plethora of LEDs, with my prized one being a Mars Hydro 3k. I expanded with a couple of tents as well as mylar, a full overhaul of our nutrients, and other little touches. I have a so-far-so-good first ever hydro grow as well.

Just harvested my first plant and progressing but I wanted a place to turn to as I get into my weirder projects like cloning and breeding. 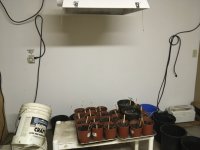 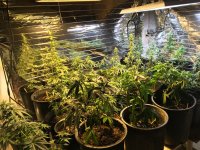 I have a combination of autoflowers, feminized photogenic, and regular plants. Lamb’s Breath, White Widow, NYC Diesel, Green Crack, Gorilla glue 4, Bruce Banner, Tangerine Dream and Blue Dream.
Also a few auto Jack Herer for someone in need of it, but unable to grow themselves. 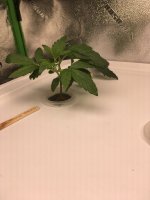 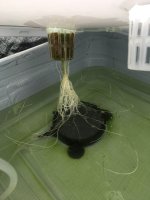 Hydro grow auto Tangerine Dream: Probably was foolish of me to use an auto seed for my first hydro but ah well! Little gal is doing okay. She was started the second week of July. I’m only doing three plants under a 2k LED panel in a tent, but for now she is the lone one. I’ll move a couple of rooted clones over once they grow out more.
Last edited: Aug 5, 2022
You must log in or register to reply here.

Clones waiting for their turn in the tent…

I’m Mrtherapeuticallyhigh and this is my 1st grow