joeb631a said:
Somehow, I have a great desire to ask you about concrete ....
Click to expand...

Makes me think of bacon 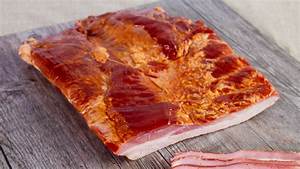 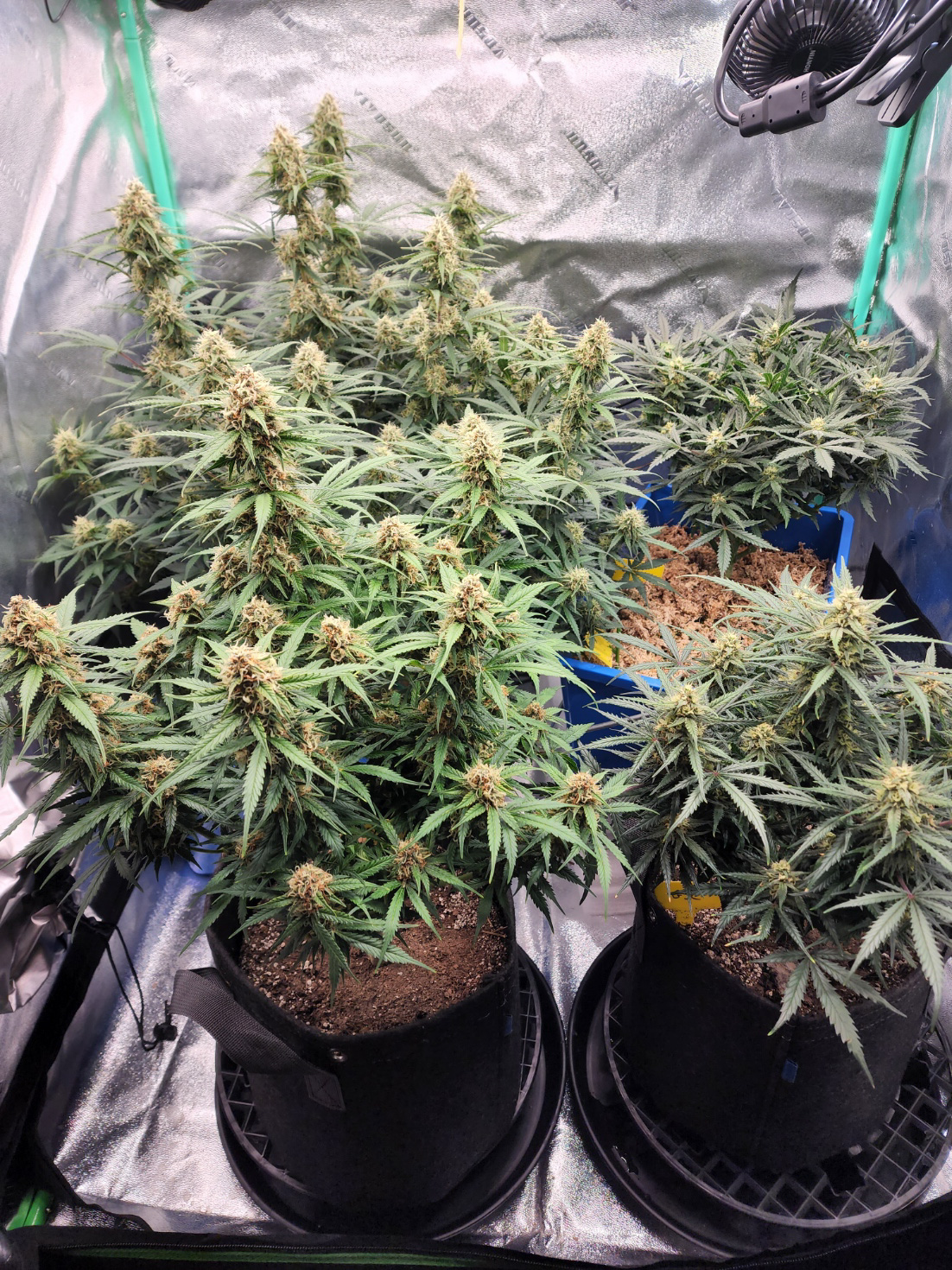 Update: Starting flush today nearing end of week 9. I'm starting with a bit of GH FloraKleen in dechlorinated water and will taper that off. (5ml/gal, aiming for moss: 6.0pH, soil 6.5pH.) The Trichomes are half milky and half clear, with the tallest buds showing 5% amber. The GSC may be slightly behind the Critical FB.

I have to say this Critical FastBud is super sweet smelling! And they are quite big for autos! The two GSC autos are showing different traits and smell more complex. The soil plant is growing as expected without training, and the moss one shows a more indica genetic, not stretching much at all but bushy and getting very frosty sugar leaves. I noticed very slight nutrient burn on leaf tips on the moss critical and on the soil GSC so I was pushing them a bit recently with the nutrients. I'm hoping for at least a 10 day flush and maybe starting a few days earlier next time.
S 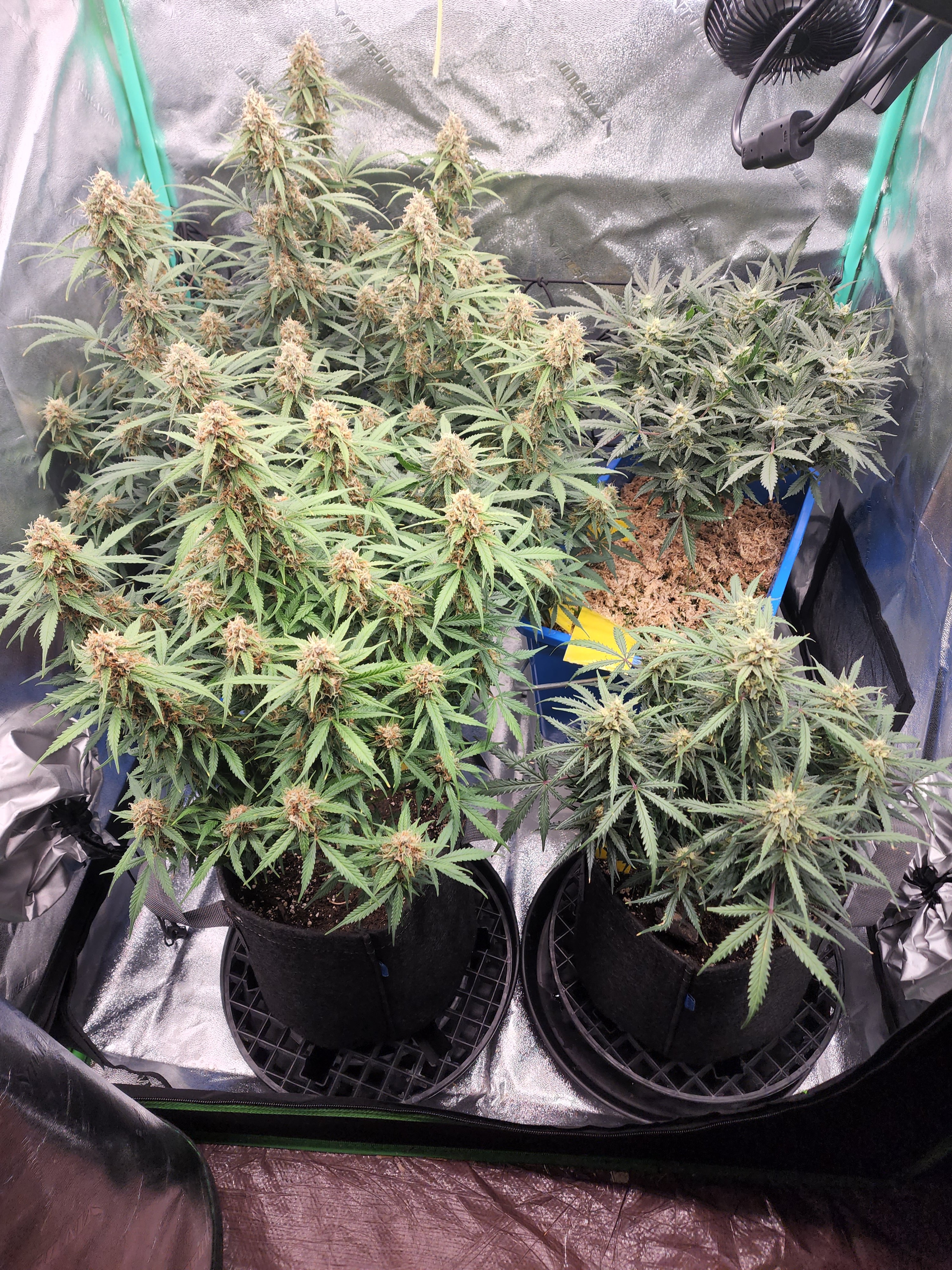 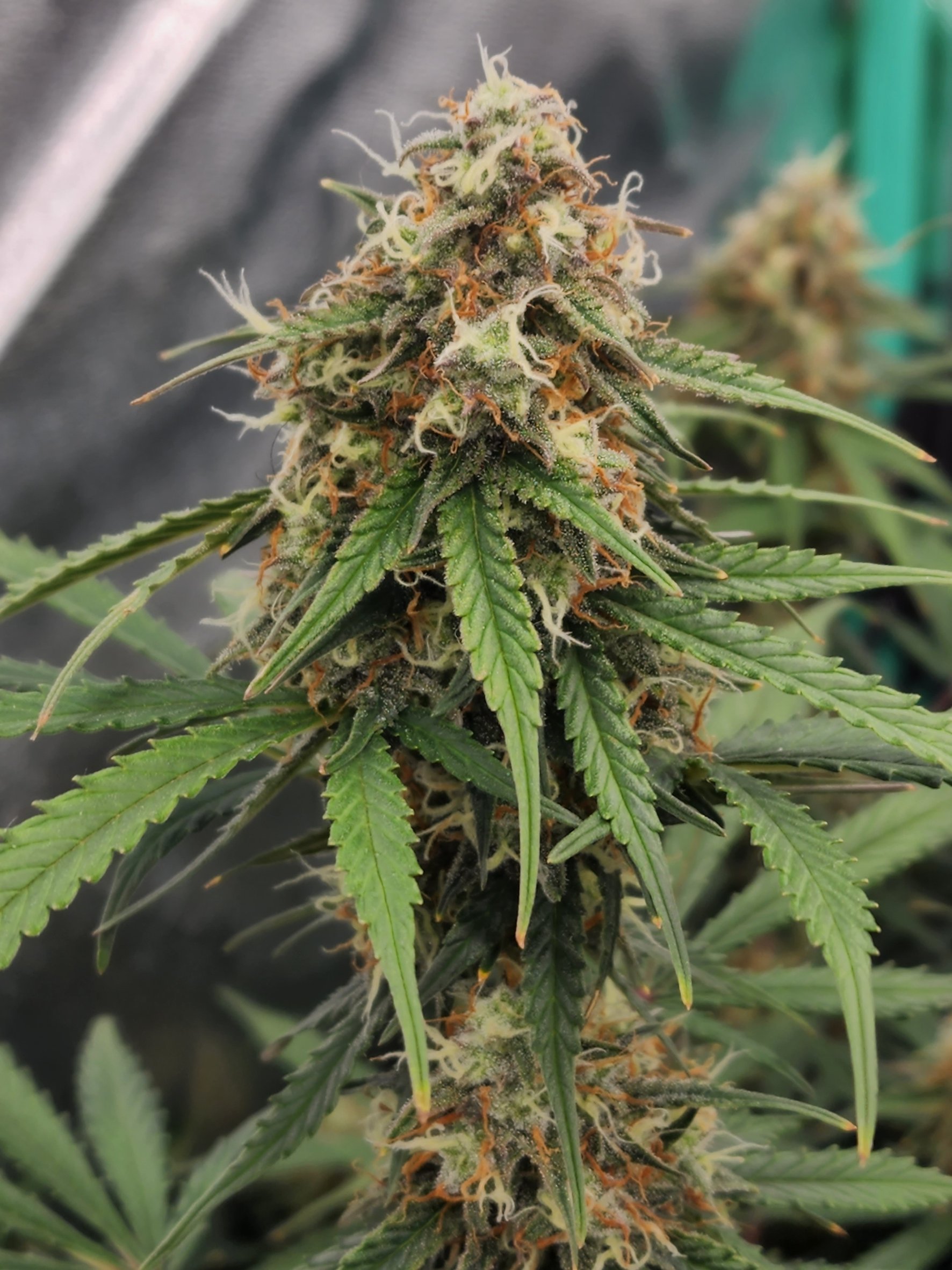 Blew all chances of being a Mod again.

It looks like soil is winning. Am I seeing that correctly? Also, I am liking those drip pans with the grates to keep the pots out of the run off. Where did you get those? Nice looking plants, slab.
S

You can't see it well in this pic, but the moss critical (back left) is much wider. It grew more aggressively from the start and demanded serious LST, whereas the soil one grew a little slower and I just let it alone with only lolly-popping. It caught up in height and looks fine too. Maybe I'll post better comparison pics when I harvest. The GSC on the right is showing two genetic traits, with the moss version less desirable (no stretch).

I think they are both depending more on the genetics that come out than the actual medium. To me, both are viable. The moss requires hydroponics but I think my GH schedule is working fine and it gives a lot of control but requires more work making the nutrients. The soil seems great too with less work overall. I am a noob so I probably have a lot to learn about the soil. I used the same soil on a couple of "Early Girl" tomatoes outside and they exploded, so it seems pretty good so far.

My first grow (in 4 decades) was the one before this, also moss and soil, all zskittlez auto fem, and I screwed up the soil by underwatering them and they hermied. I also stunted the moss seedlings by being too careful about fertilizing them early. So my first harvest of zskittlez auto fem was a learning experience. They were small and I had to toss the two in soil for seeding. I ended up with 5 ounces cured. Also, I didn't have my drying/curing ready and they got degraded the way I dried, but even so the smoke came out very strong and not horrible tasting in spite of the drying failures. This time, I have a Dry Tent, a humidifier, and I plan to do it right. Or at least better and I'm quite excited about how these are turning out! Thanks for the feedback!
Last edited: Aug 21, 2022
S

oh, one question: I see in a lot of youtube videos of autos ready to harvest, that most of them are just buds and almost no leaves outside of some sugar leaves. I didn't defoliate nearly that much. Is there an advantage to heavier defoliation during flowering?

You are gonna get several different opinions on this. I defoliate but not to the bone. Some do some don't. Experiment and do what works best for you. I especially clean up the bottom 1/3 of the plant. Everything. The buds down there are gonna be nothing but popcorn buds and rob energy and growth from the upper canopy. Some leave all that on. Looks like a fungus jungle to me.....
S

I plan to strip a little more of the bottoms on my next grow. I've been doing about 1/3rd also. I feel like I could be a bit more aggressive clearing out the competing internal foliage too. I suspect it might be just for appearance that they strip so much of the leaves for the giant bud shots. Or maybe that is a way to eliminate popcorn buds completely? As you say, more experiments needed

I clean up the bottom 1/3 too. I also pull fan leaves off just about every time I check the tent too and always seem to find a jungle of extra leaves to pull. Leaves are good, but to many can cause air flow problems and when your tent has high humidity, you don’t want your leaves smashing together causing other issues. You remind me that I have to defoliate in my flower tent now

I've been leaving fan leaves on if they stick out the side and don't block a bud site, especially during veg. Otherwise, they eventually get plucked. But I think I am ending up with a few too many lower bud sites so maybe will try to lollypop more aggressively to 1/2 next time, along with a little more aggressive thinning internally. The moss GSC has been the biggest issue with overlapping leaves leaving dew areas where they touch in spite of multiple thinnings.
S

Here are some better side by side pics (first 2 are GSC, second 2 Critical): 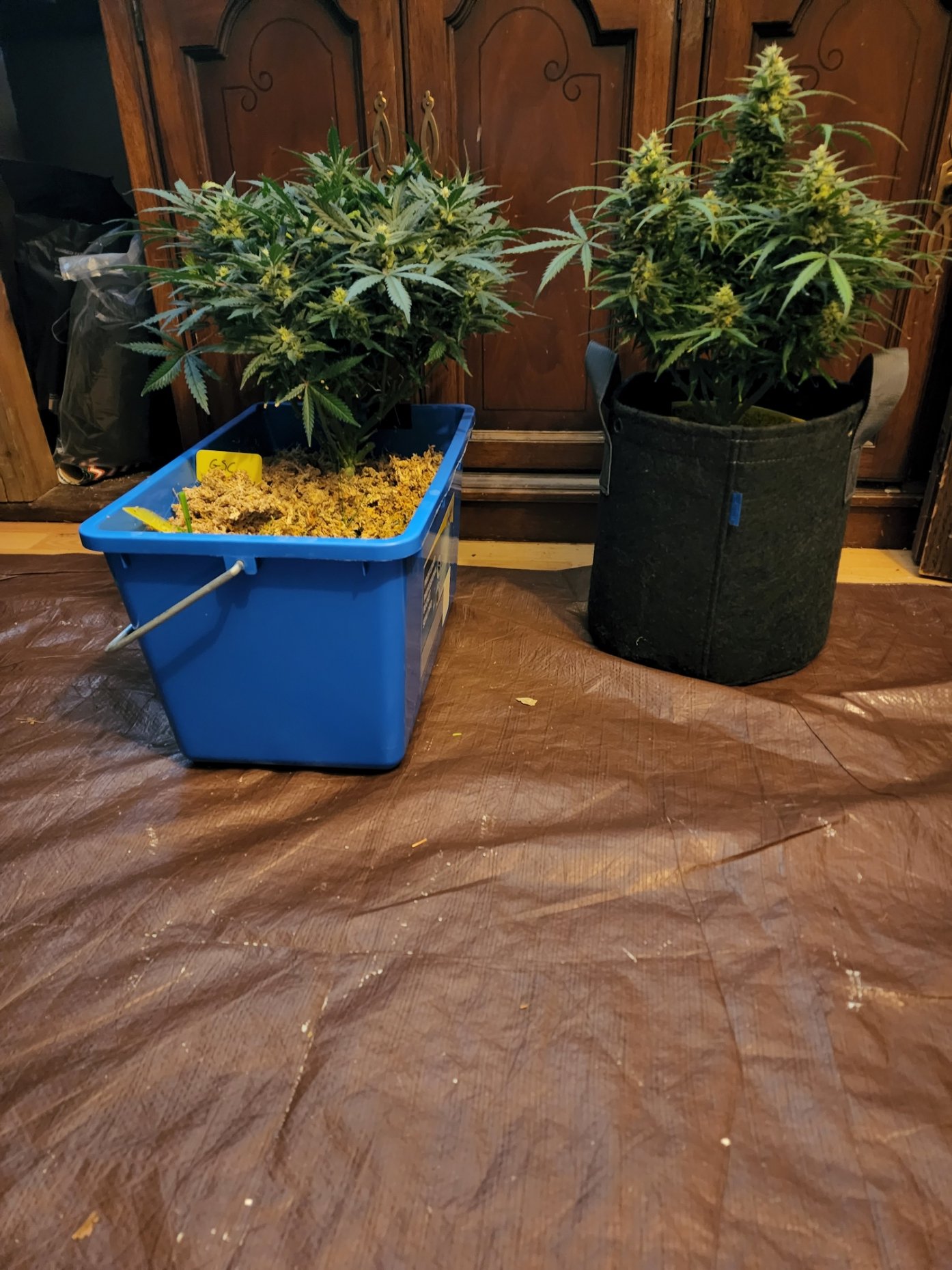 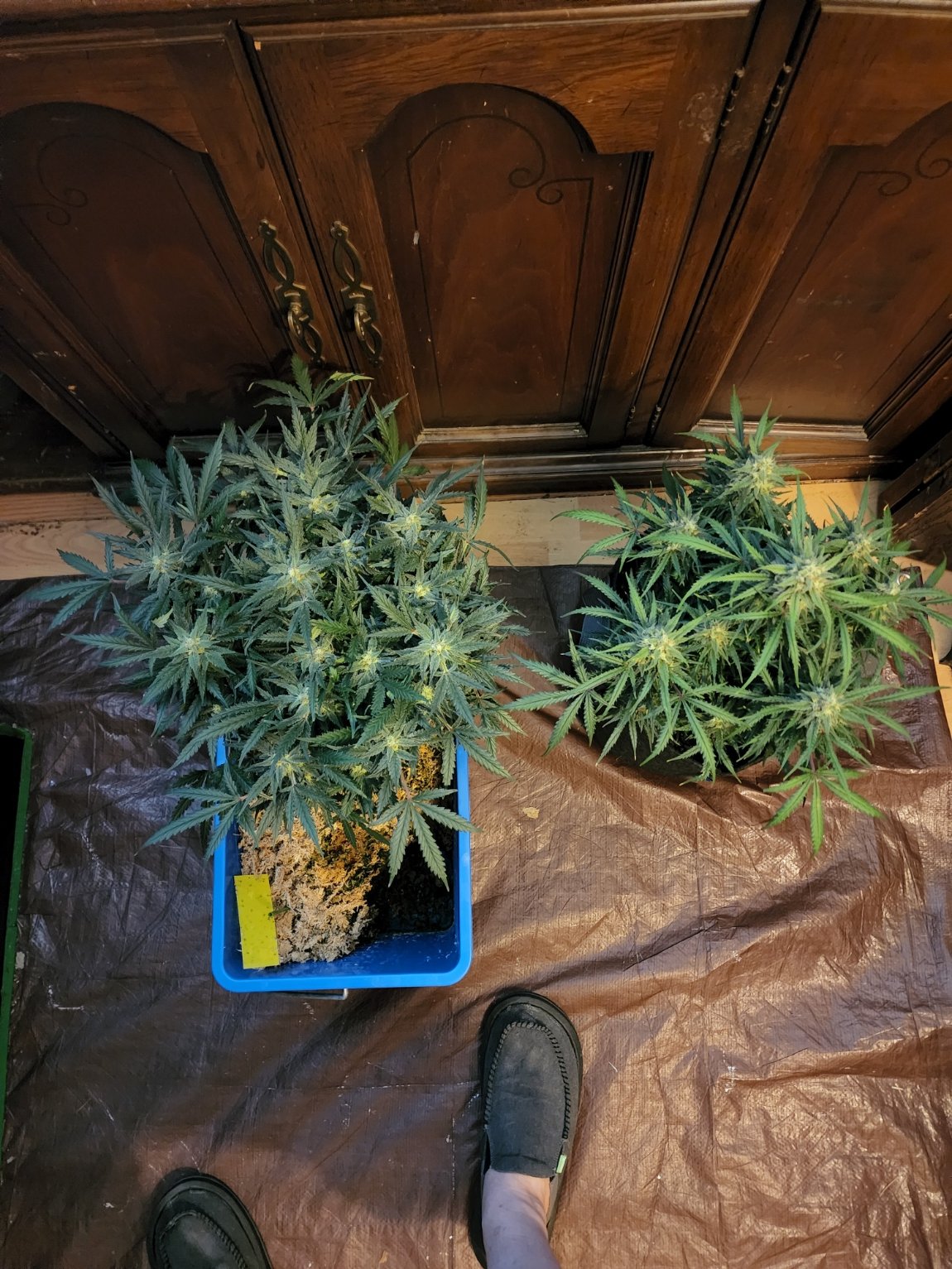 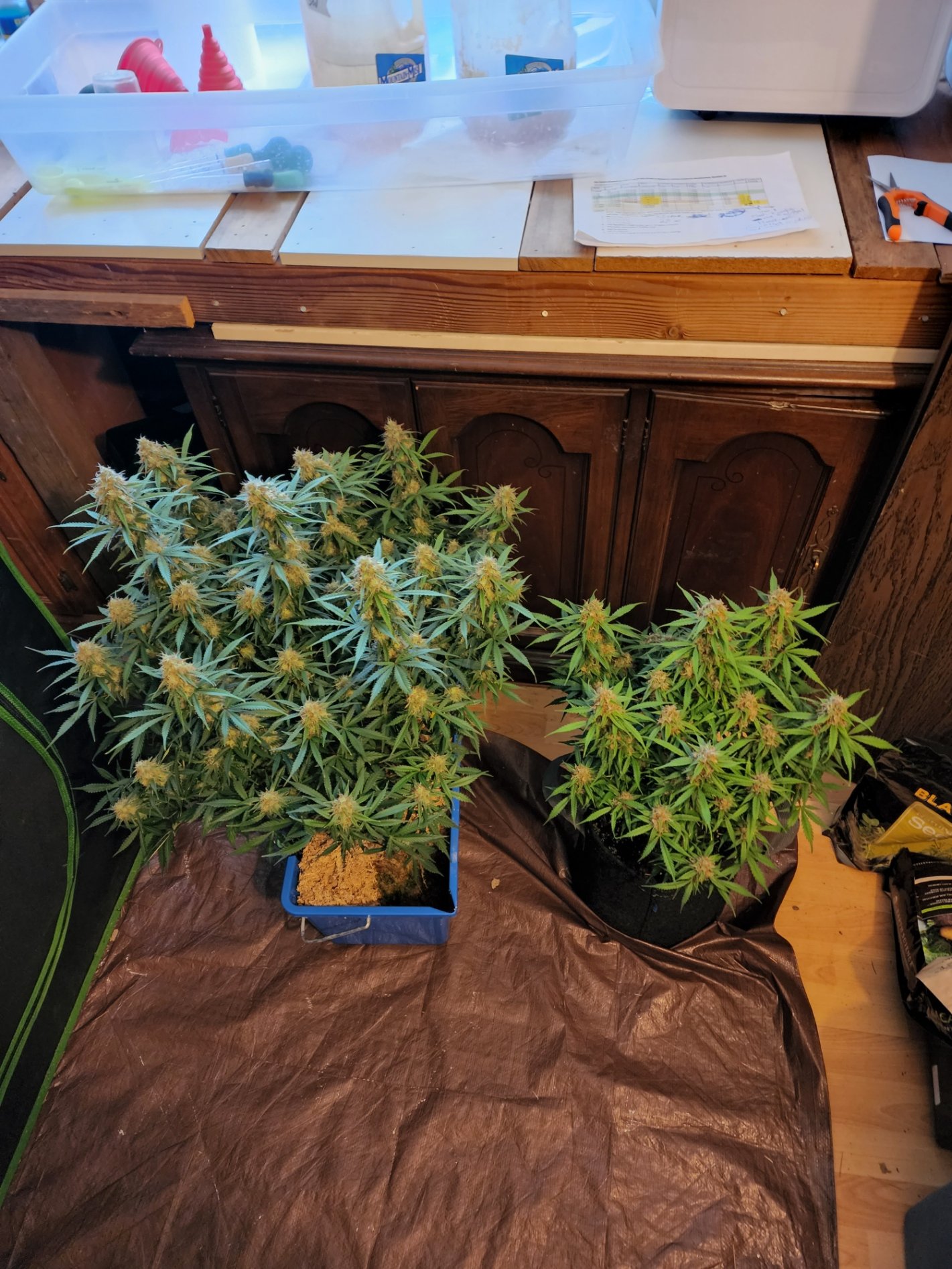 The moss is definitely holding its own. I could try larger fabric pots next time for the soil. These are only 3-gallon.

I once seen where a guy from Jamaica the last 2 or 3 weeks would take all the leaves off his plant,,,and his buds were huge. He said the buds could take all the energy they needed from the sun or lights. Said he was growing buds to smoke,, not leaves.
You must log in or register to reply here.

Howdy dudes! New to site, not to grow

Greetings from the midwest U.S.
2