Looking so good! I love the stretch! They smelling good?

Skunky and fruity. Gonna be a good crop

Day 21 of 12/12.
As expected i had a good amount of stretching over the last 2 weeks. Now it looks as though i will have several dozen 12 inch colas poking up though the screen. I trimmed out a few sucker branches from each of the plants, just enough to not cause stress. They are stacking tons of calyxes with brilliant white hairs. Primitive trichomes are forming on the leaves around the bud sites. The smells from the 3 strains combine into a fruity skunk perfume bouquet. Its quite strong, the carbon filter is working overtime.
Ppms are up to 1450 after adding a bloom booster. There is a very slight tip burn on sweet amnesia. Im adding back just ph water until i get the ppms down to 1200. Ph ranges from 5.6 to 6.1 with no ill effect.
The three plants are reaching for the spiderfarmer light. So far it seems to be a good purchase. There is much less heat now that the kind led is gone. Temps are staying in the range of 80f before lights out and 75 before lights on.
Im still flooding 2 times daily, which seems like a perfect amount using promix medium. No pests of deficiencies noted this week. I believe this is a very healthy garden up to now (knock on wood). I will continue to take sucker branches here and there. I will continue with the same nutrient schedule and feeding regiment. I will keep the mars sp250s at 12 inches and the spiderfarmer at 20 inches away. I thinks thats it for the week. 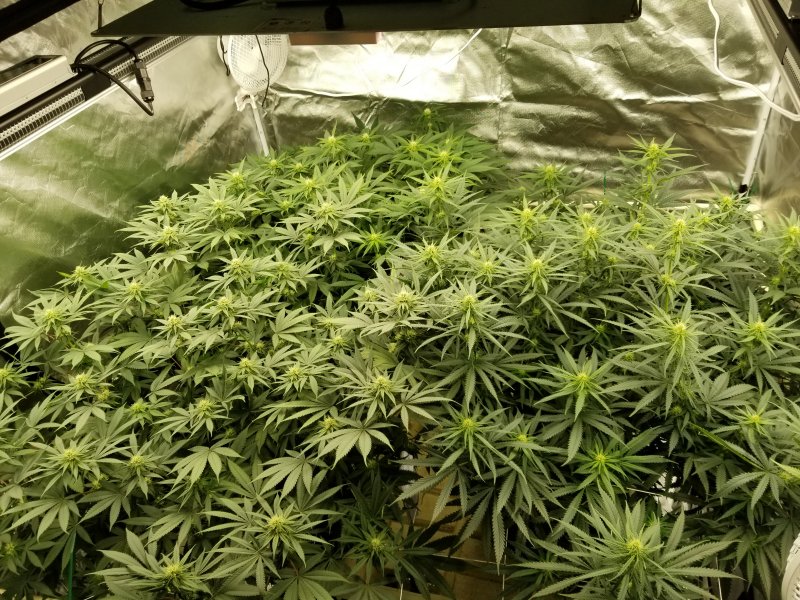 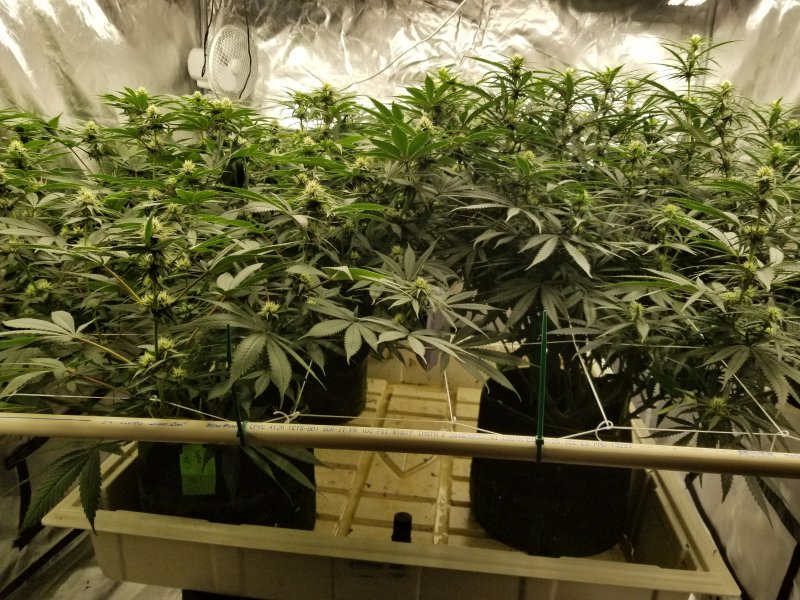 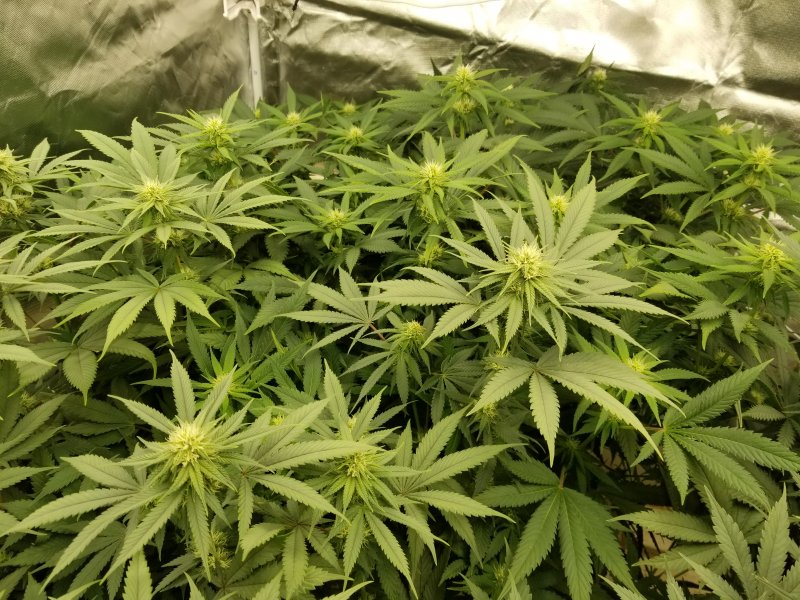 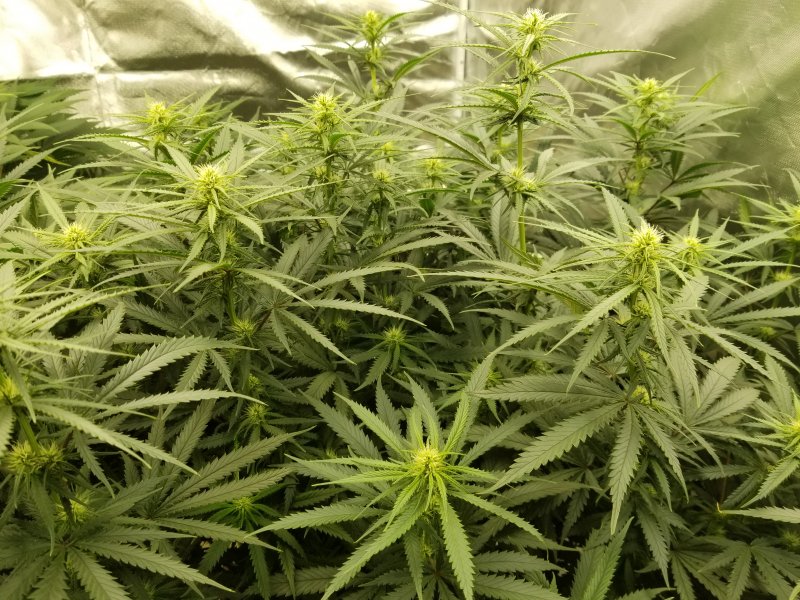 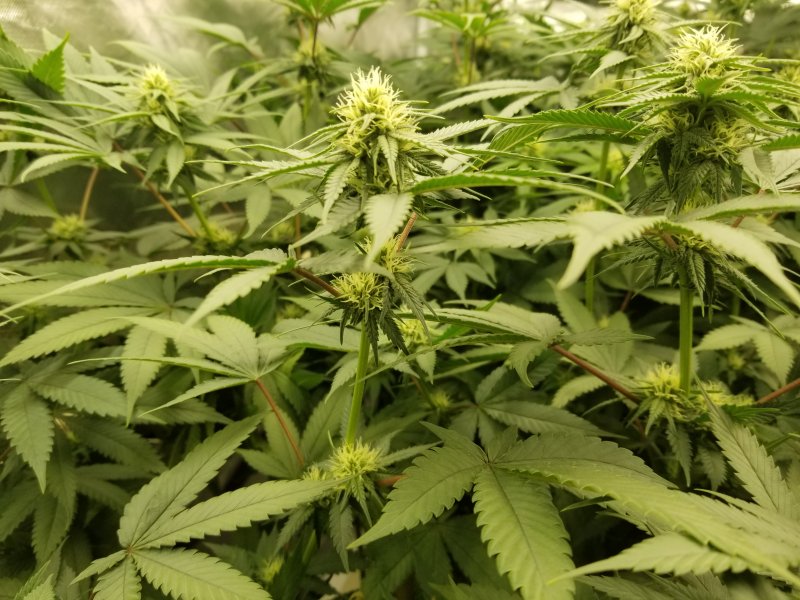 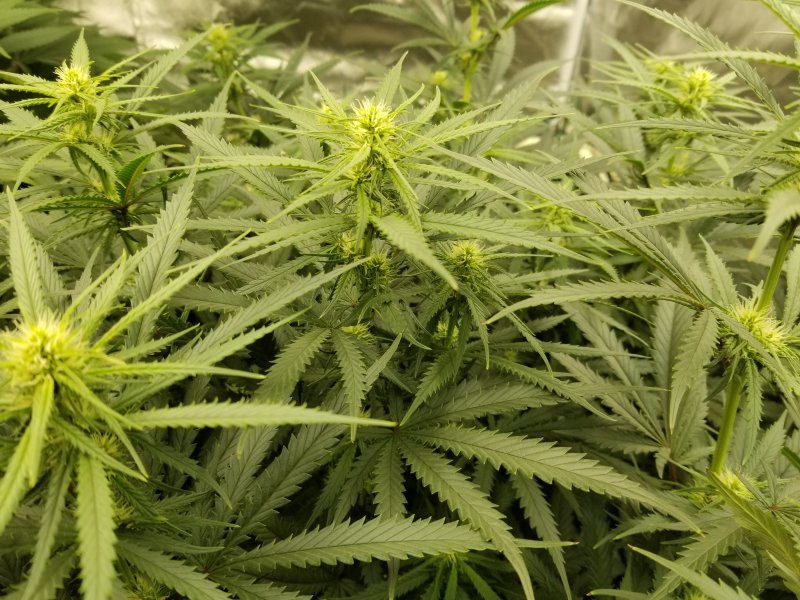 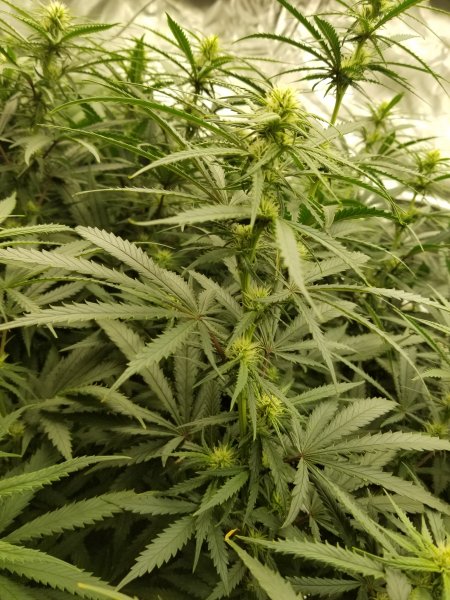 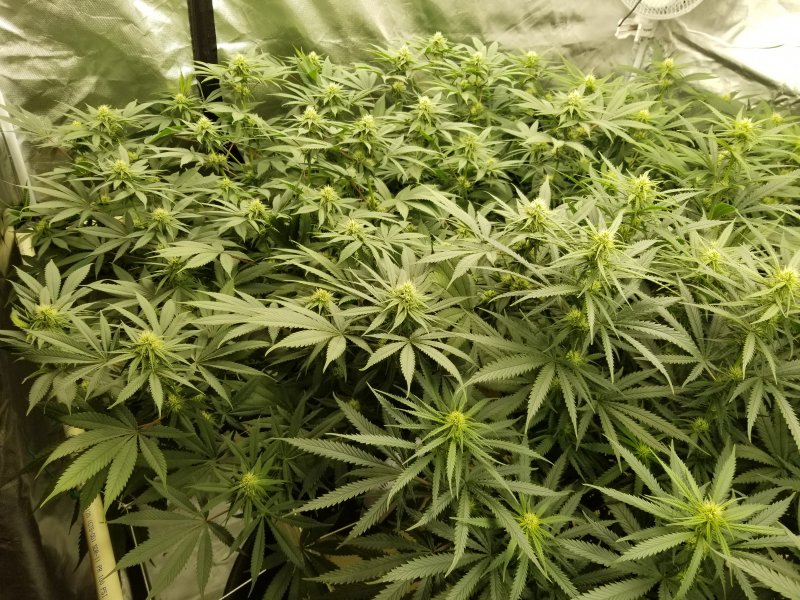 Wow! That's impressive. It's looking really nice on there. Thanks for the pics!

Thank you thank you

WOW! Plenty of TLC here Lesso! Keep it up, Ill be watching!

Day 28....some trouble on purple moby and an equipment failure.
My tds meter was 500 ppms low out of the blue which caused me to add too much nutes. I had it at 1200 on the meter which was actually 1700. Too much for these plants. There is some burn here and there. Purple moby was hit the worst with yellowing of the leaves and browning pistils. I gave her a flush with ph'ed water and adjusted my res back to 1100. Hopefully they will pull through and not lose too much on the yield. Its early enough so that i think the next 5 weeks will be ok. Totally my fault for not calibrating the meter as often as i should have. No signs of pests or mildew/mold. The rh is around 46%, temps around 75 to 81. I may cut the bloom booster out of the equation, everytime i add one in the plants start looking worse.
Even with the foulup i still see massive improvement on bud development throughout the grow, i cant be too disappointed i guess. Im still expecting 900 grams dry weight.
Sweet amnesia is the biggest producer, sweetest smelling, and frostiest buds. I love the sativa dom structure she has.
Blackberry og has a very pungent smell, golfball nugs, and a squat indica look. Im guessing it will be a night time smoke.
Purple moby has nute shock. Period. I hope she pulls out because she has a nice hybrid structure and sweet fruity smelling frost covered buds.
Worst week of the grow so far.
Get it together old man! 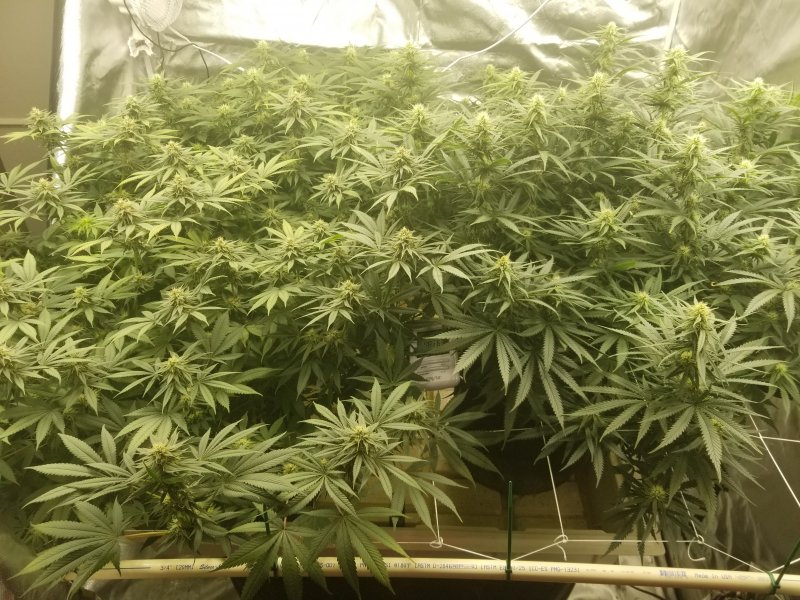 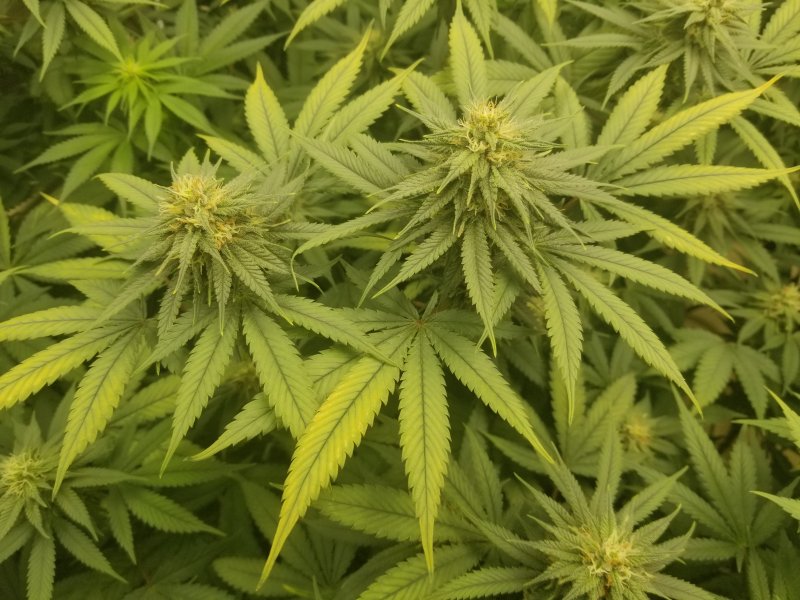 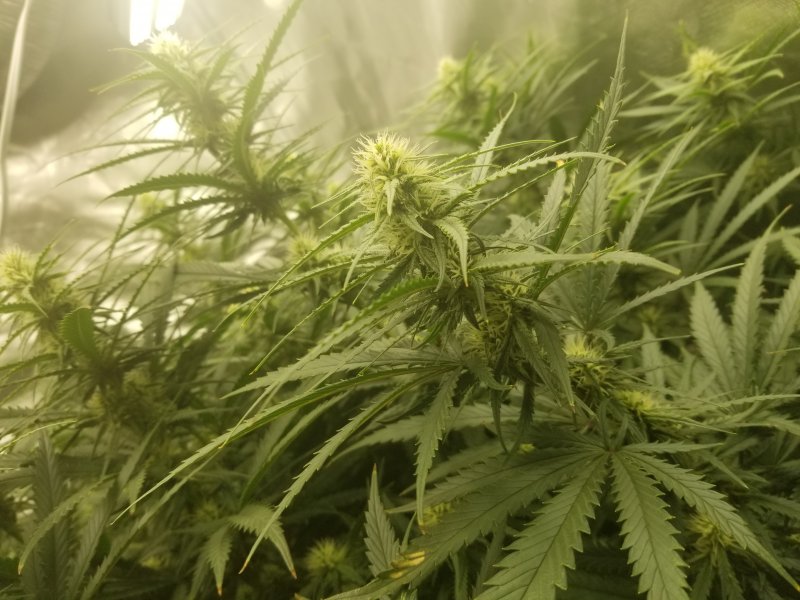 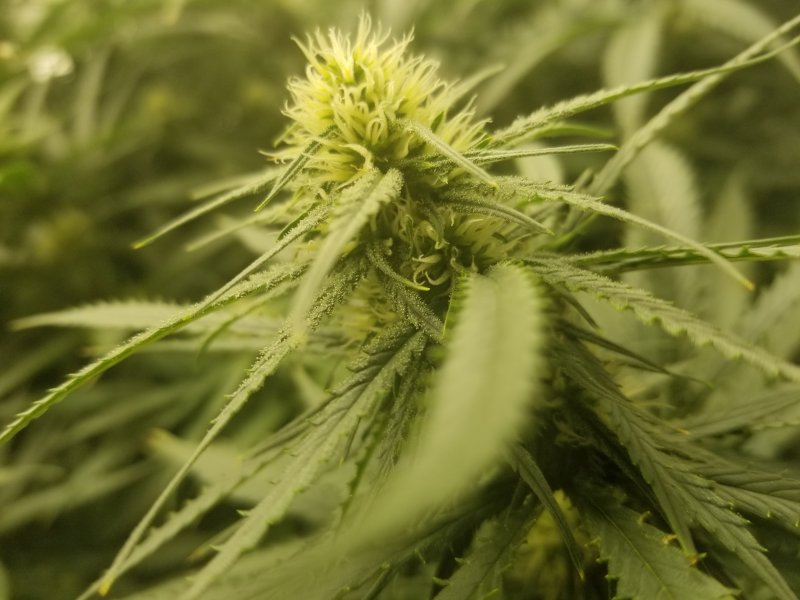 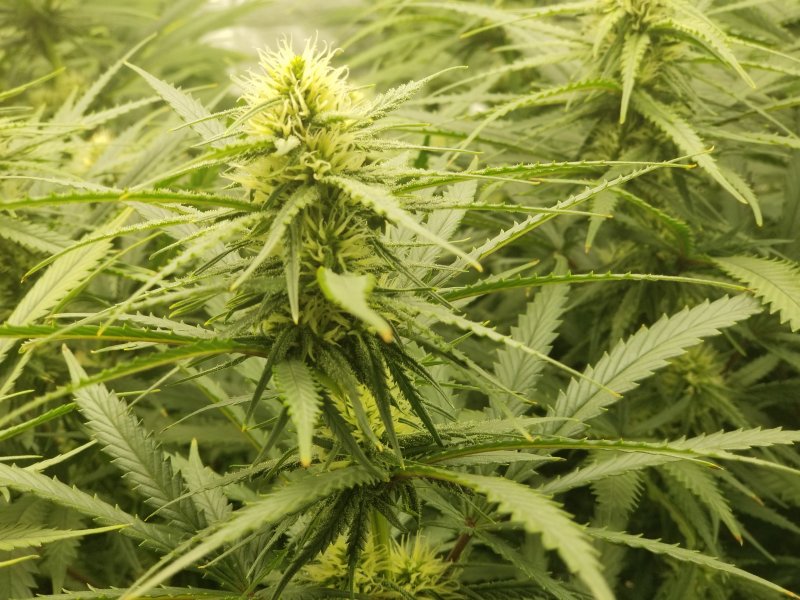 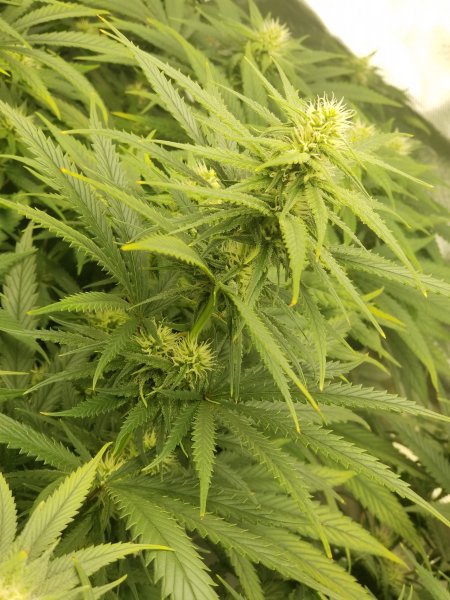 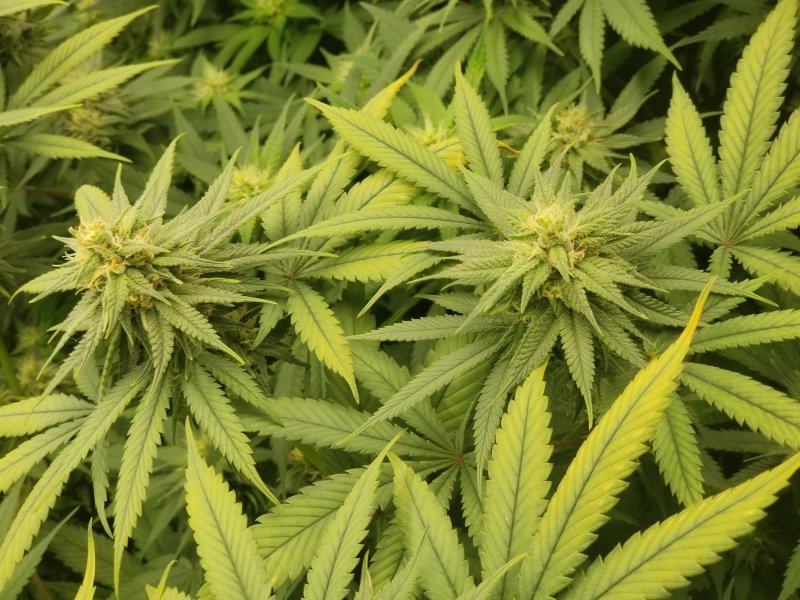 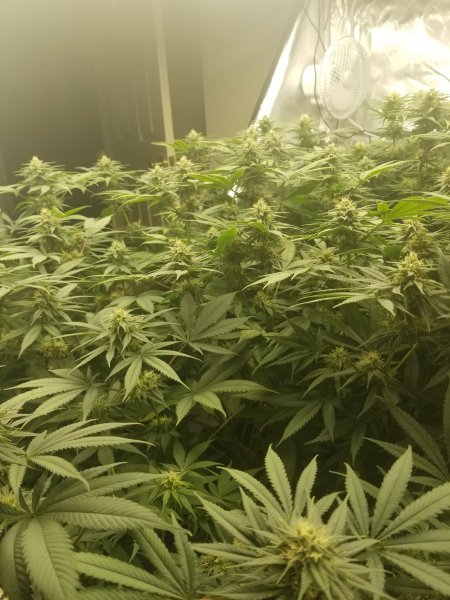 Great update! The pics are on point, thank you! I hope you do get your expected 900! With the amount of TLC I see here you should!

Thanks, i hope so

If I was on the fence about shelling out for a decent LED before , I think I just fell off it. And where are my socks?! : )
Great grow, great read.

Thanks you. I have been running leds for a while now. I was sold on efficiency and heat management. You cant go wrong with either of the ones i have.

Is that this light? https://www.kindledgrowlights.com/products/k5-xl1000-wifi-led-grow-lights

I guess you really do get what you pay for. Look how much bigger your buds are at 21 days than mine are over on my thread. Of course, the 2 Kings cost $300 bucks and, if that's your light, it costs $1900. But if I were doing this regularly, that's eye-opening.

I used to have the kind led. I bought it used for 800 dollars. It was a good light, not as advertised though. No reason to pay that much for that light. In the 1500 dollar arena there are some really awesome lights. The lights i have are a spiderfarmer sf4000...500 dollars...sp250s at 250 each. Yeah i spent 1000 on lights, but there are no bulbs to change, ballasts to maintain, and about 60 percent less heat than when i ran hid lights. Heat is a major issue, its always hot where i live.
K

Had to come see what Lesso was up to !-- That looks like pictures of marijuana ?-- Ain't that against the law ?

Keef said:
Had to come see what Lesso was up to !-- That looks like pictures of marijuana ?-- Ain't that against the law ?

Day 35
So the purple moby is still not looking very good, in fact it is showing signs of maturing. The sheet says its a 56 day flower, so who knows. Swollen calyxes, cloudy trichomes, brown pistils. The other two plants are still forming well. Im seeing some late autumn discoloration in the fan leaves, makes sense since they are about half way through flower.
Ppms are back to normal about 1000 to 1100, ph is 5.7 to 6.1.
Temps have been a steady 79f.
I hope to get a decent finish from the purple moby, she is very frosty, just not very large colas. 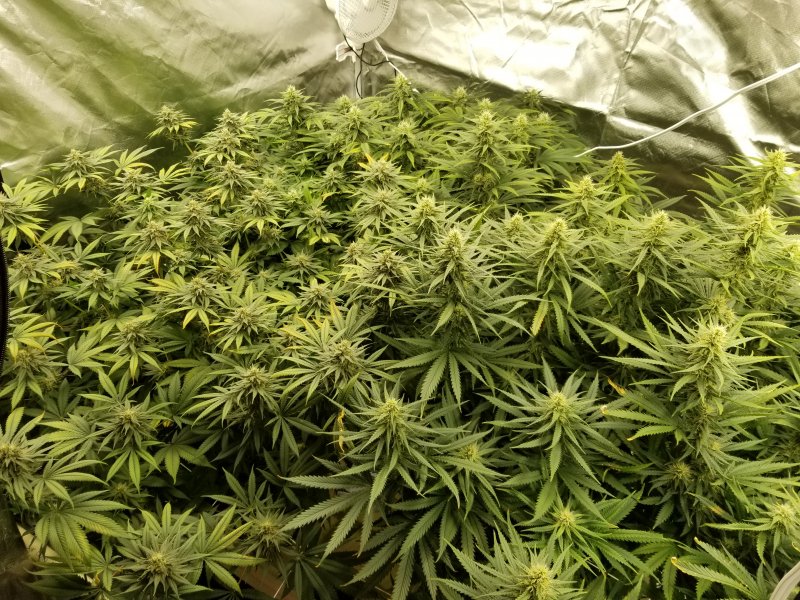 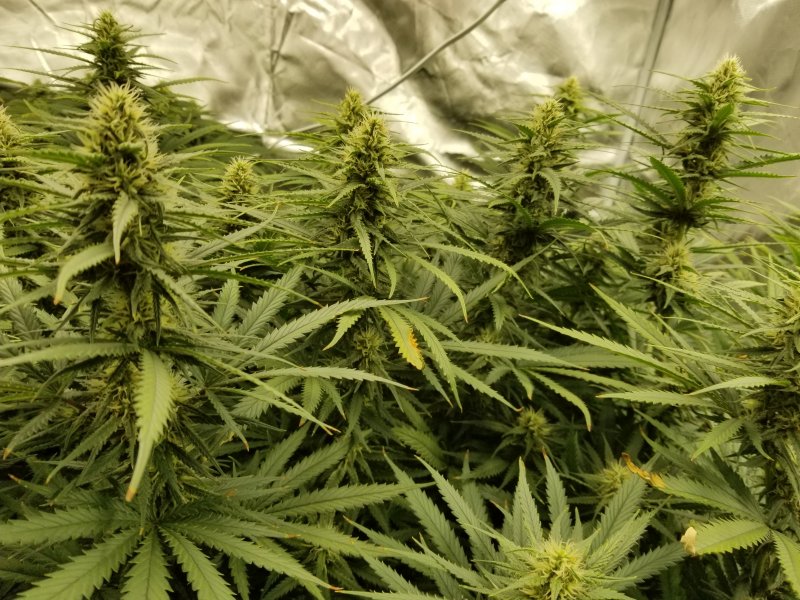 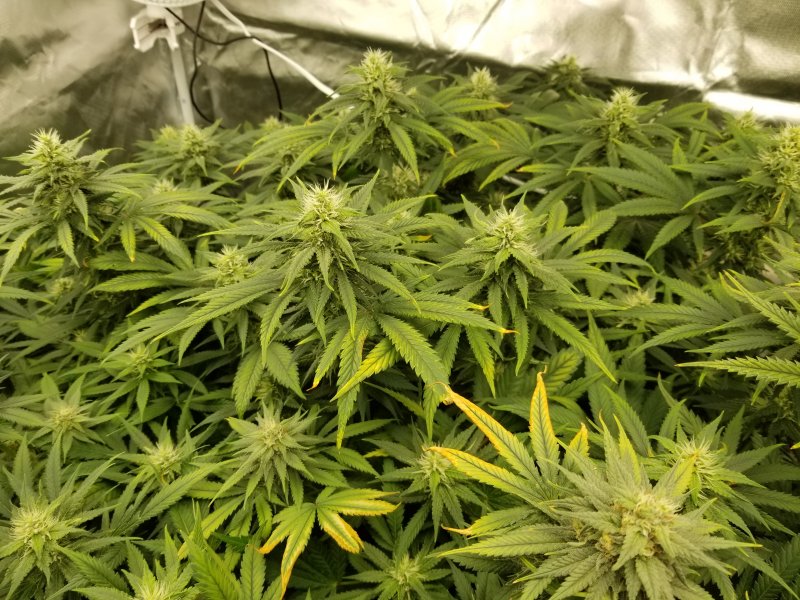 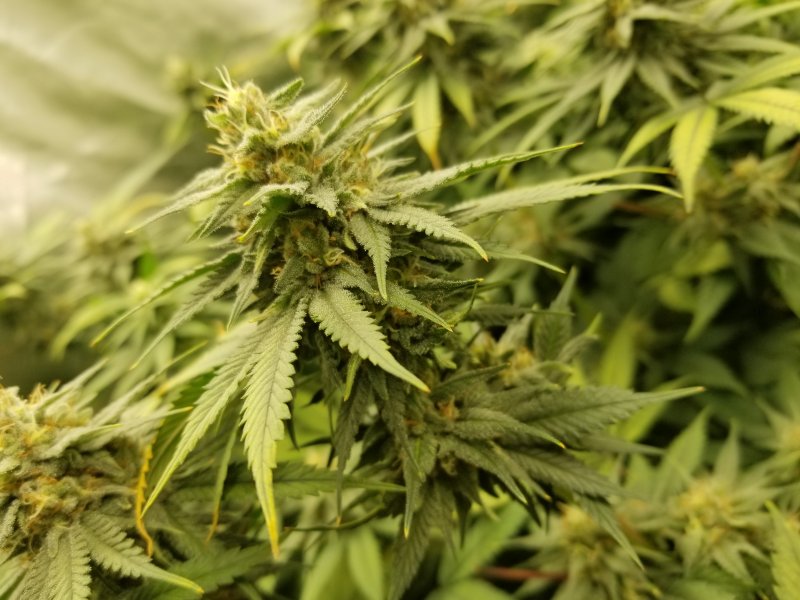 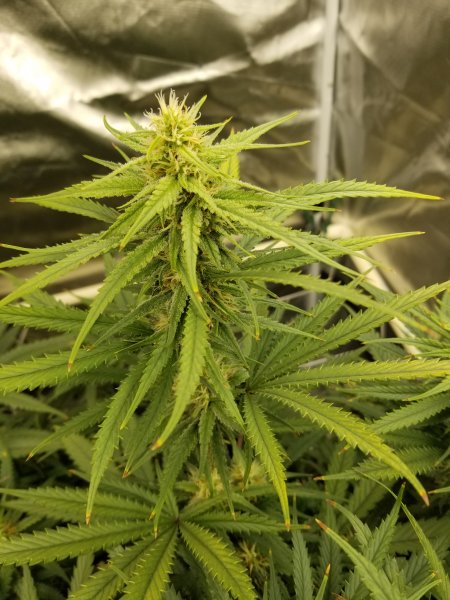 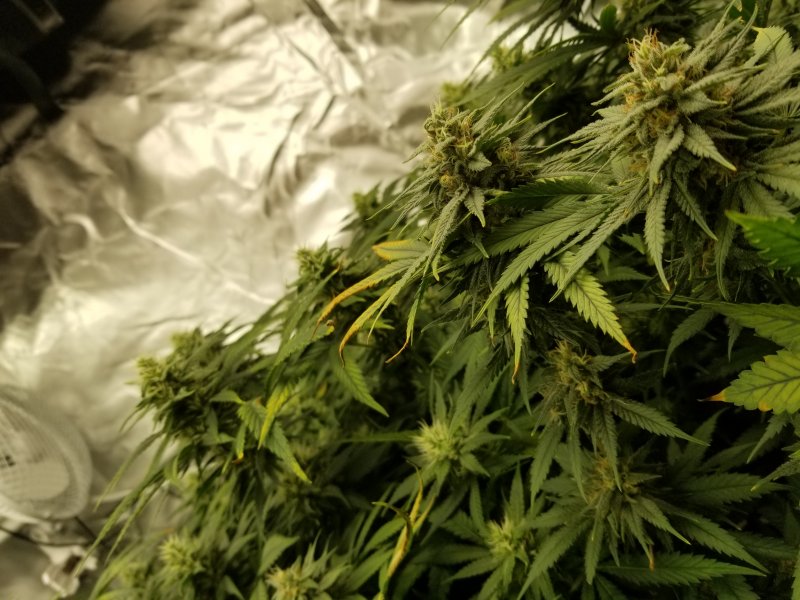