Well, After my catastrophe. I've pretty much started over.
The one in the bubbler is a cutting of an NL. That one has a story. It never rooted and never died. Just started to yellow recently. It was green for over 2 months. So its turned into a pet project with me. Pretty much grow or die. hahaha.
The one that has a couple of nodes to it is one of my bagseed starts that didn't suffer much damage after the fiasco. I like to grow a "whats it gonna be" plant.

I'll weed out the weaker males and females and select the best. I'll prolly keep one male and 1 female of each. then weed out more after the smoke test. Of course flower the females I don't want to keep.

In a cab in the other room. of course my NL mom. But heck I got pictures plastered everywhere of NL so not worth the server space.

This is to get things started.

I'm considering closing off the tub section for veg and prop. and adding a shelf above for flower. but then I'd prolly have to train em. I'm torn between my cab and just doing everything in the tub. We'll see after thing progress.

The camera setting was off. so things look "faded" I gotta mess with it.
I also got to go to wal-mart today and get two new tubes. those are older and don't have the brightness. but they are workin ok for new sprouts.
I moved everything to the center so ya can see the plants. but they moved right back under them lights. 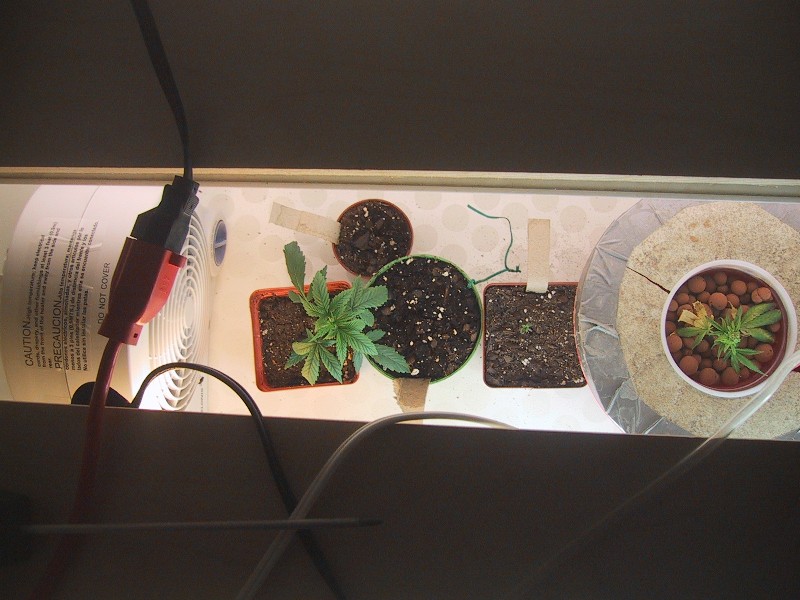 Man those sound like some nice crosses Mutt. I like the sounds of the Juicy Fruit x Champagne, and the Juicy Fruit x Cindy99. I'm sending all my GREEN FEMALE MOJO your way for this grow seeing how were not gonna need it for awhile (clones). Gonna be following this journal from beginning to end so be sure and keep them updates coming including pics. Good luck man.

Those do sound like some awesome crosses. I cant wait to see this one pan out Mutt.
S

I'll be doing a weekly journal. So I can keep track of growth. I spaced the sprouting 1 week apart. I have 9 more that need to break ground. Not including my wifes 2. Its HER First Grow!!!! I'm not allowed to water them or anything. Those are her babies. She's all excited. I hope they grow good for her. She has a great green thumb.

So here is my first batch. Seedling stage. I need to get my hands on some plastic tags I just shoved some paper tags in there for the time being.

Well here is the ole "what it gonna be"
It seems to be bouncing back from the stress ok. 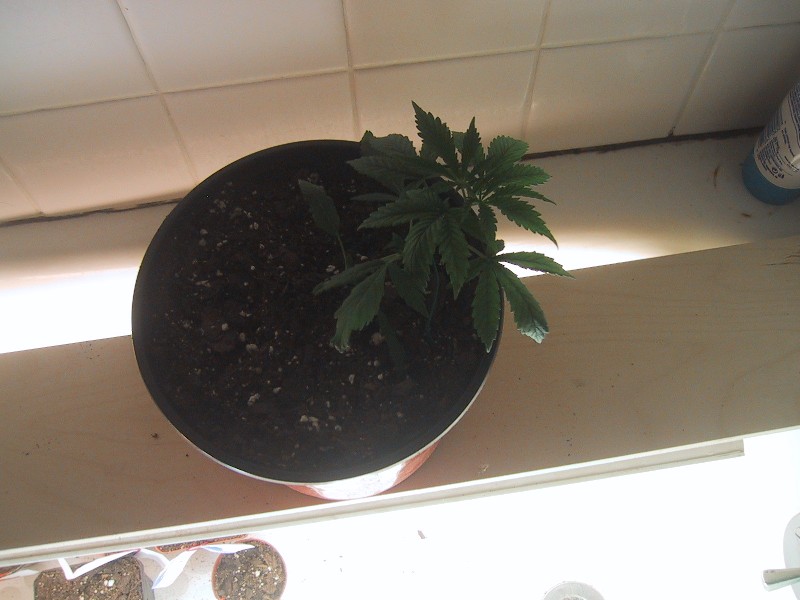 Well heres the "Charity Case". This thing is about one sad clone. I know she's gonna hermie. It reminds me of a horror flick where the monster gets shot 100X thrown off a cliff then put in the bottom of the lake, but still don't die.
Still a little green to her tho. I won't let her go until everything is toast.
But I don't think she's gonna root.
but hey, gives me something to do.
The stem is emmersed in bubbling water and I mist her twice a day. 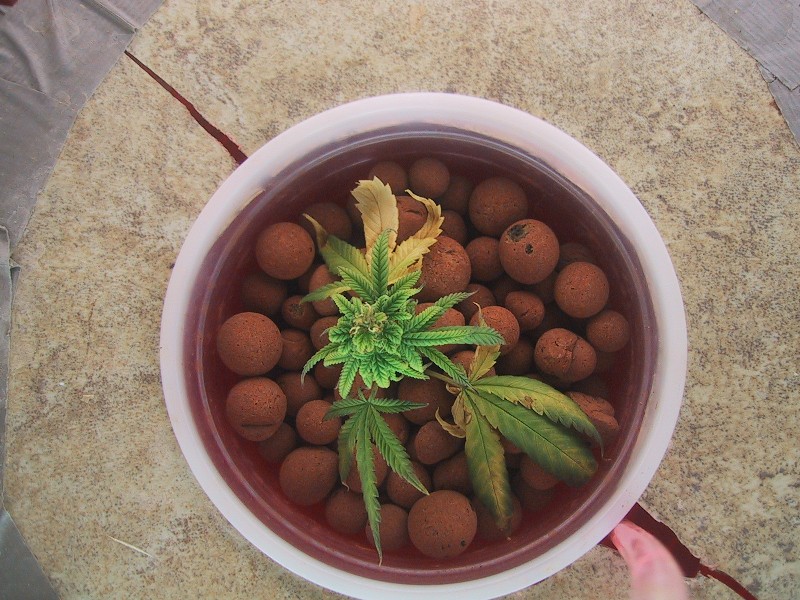 Figured I'd post my chems if anyone is curious.
I want to get away from the Dyna-gro..but looks like I'm stuck with it for a long while. Hey it was only 20 bucks for a gallon. I want to switch to the Gen. Hydro Maxi series. I really like that line. I look for hydro ferts with recipes for soil and foilar spray as well. Only 1-part mixes. not the 3-part ones. I like it easy for my simple mind. LOL
The superthive I only use for the watering right after transplant. It works great for me during that time. but don't use it any other time. 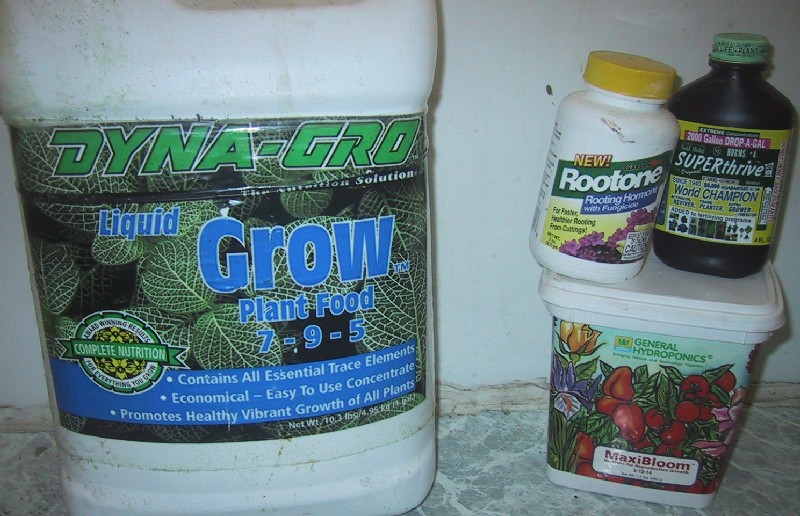 Hiya Mutt. How's stuff? That's one sick lookin' little clone. I'd recommend taking it out back and shooting it but that would be a waste of a good bullet. Nah, it just might make it. Green mojo and Karma work in weird ways. We pull for the underdogs in life. I think that plant qualifies.
Somehow I missed your fiasco. I'll have to read some older posts to see what happened.

I agree with you on the "simple" ferts. I use the 2-part GH Flora Nova and wish I could simplify further. I want to go organic at some point. You mentioned in your note the Superthrive being used at transplant time. I've got a couple of questions if'n you don't mind. How long have you been using ST? What amount do you use?

Here's my latest. Gonna harvest this one for Thanksgiving. All the best. 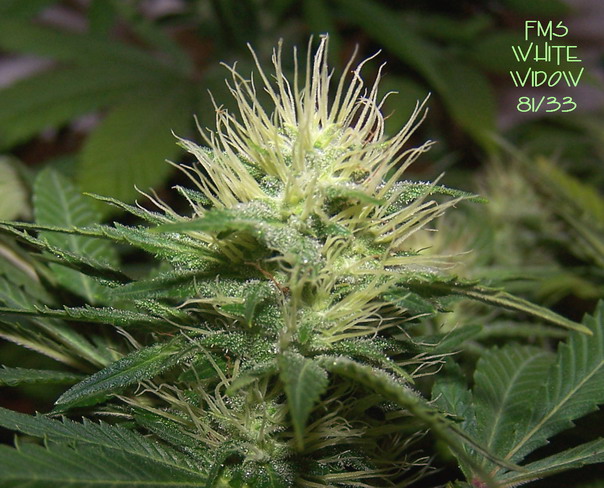 Hey REV. Your title cracks me up man.

Yeah my clone is pretty sad. LOL, but thats why its a charity case. Not ready to pull the plug even though it looks terminal. HAHAHA

I been using ST since my first indoor grow. I found using it too much can have a -impact. but during transplant I found a much faster recover time. Plus the B1 never hurt. I would prefer to use ThriveAlive (no hormones). but can't find it anywhere around here. and I don't like paying shipping and handling for something I can find similar.

I just put a cap full per gallon of water. the cap is a hair under a 1/4 tsp.

Tidbit tho, I've been told NOT to use ST during flower though, not sure why, but I listened. Maybe because of the hormone thats in it.

Looking good Mutt! Now I knew there was no way you could have got the tub from her, I see she did not actually give it up, just found a better use for it. Two Green Thumbs Up!

Good Luck with the clone in the last pic man.
T

Damn Mutt your gonna have yourself a jungle in there before ya know it. Here is some GREEN MOJO for the wifes two babies.

C'mon Mutt, if anyone can save it , you can! Way Good Luck on the grow

I was outa town for a couple of days. When I came back. I was in a great mood.
All but 2 broke the surface. The clone looks hideous tho. She ain't gonna make it. But still haven't "pulled the plug" yet.

Goin to wally world and putting another 4' flo fixture in and replacing the other tube flos. That should help some.

The flash didn't go off. I'll get a better pic tomorrow. but was happy to see sprouts all over the place.

Mutt said:
I was outa town for a couple of days. When I came back. I was in a great mood.
All but 2 broke the surface. The clone looks hideous tho. She ain't gonna make it. But still haven't "pulled the plug" yet.

Goin to wally world and putting another 4' flo fixture in and replacing the other tube flos. That should help some.

The flash didn't go off. I'll get a better pic tomorrow. but was happy to see sprouts all over the place.
Click to expand...

Considered overdriving them? I noticed you are having to add heat.

lookin good, congrats on the breakthrough. I am the same way, I wont pull the plug until it is wilted over.

Elephant Man said:
Considered overdriving them? I noticed you are having to add heat.
Click to expand...

I replaced the flos in the 4'. gonna add another 4' fixture tomorrow. I think they will perk right up with an extra 6K lumens. giving me a total of 24K lumens. I'm gonna let that sit for about a month then start adding the HIDs.

I'm very excited, will be following your journal religiously bro