RosterMan said:
Good show but the sub titles made me stop watching
Click to expand... 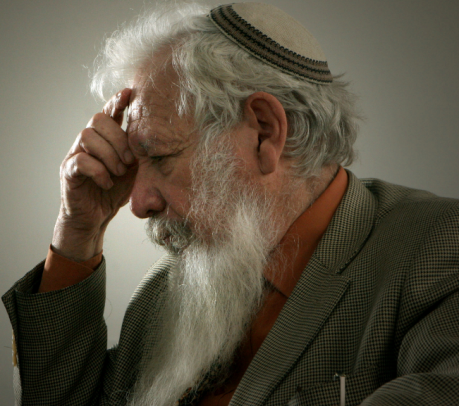 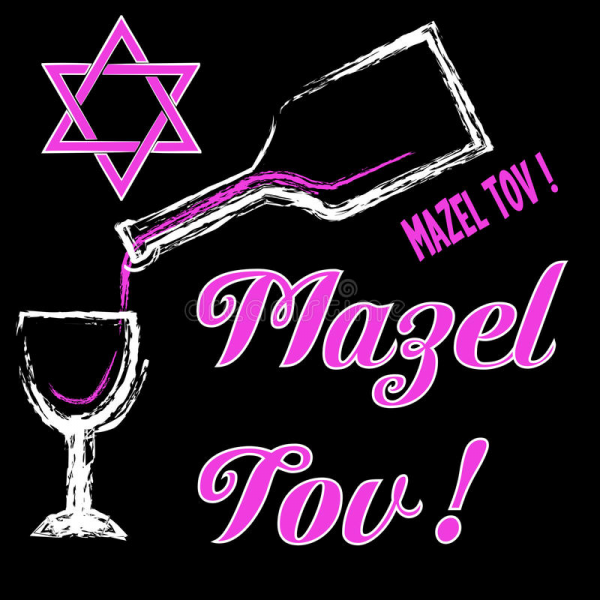 Ya'll are crazy... probably why I like ya's. hehe.

What a week it's been.. really miss wife when it comes to watering day.. she moves all the plants for me. I spilled water, made messes I had to clean up only to repeat in a day. this Happy Frog manure soil dries out so fast it blows.
plus with plants being a week away from 60 days old, I've not seen buds this small in some time. looks like I'll be running these a good 80 days to achieve weight.

Let's take a quick peek at our side by side experiment on , should I up pot?? hehe 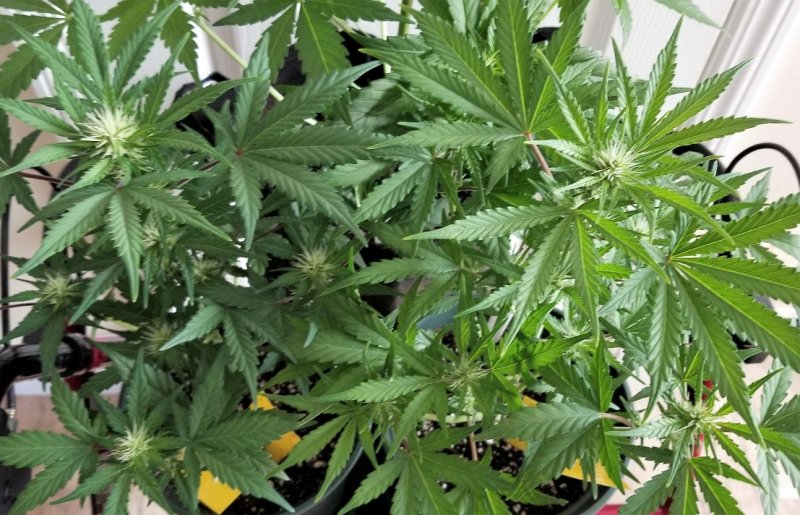 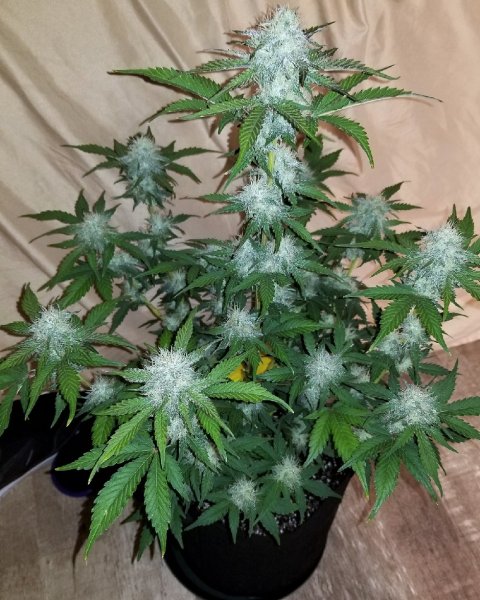 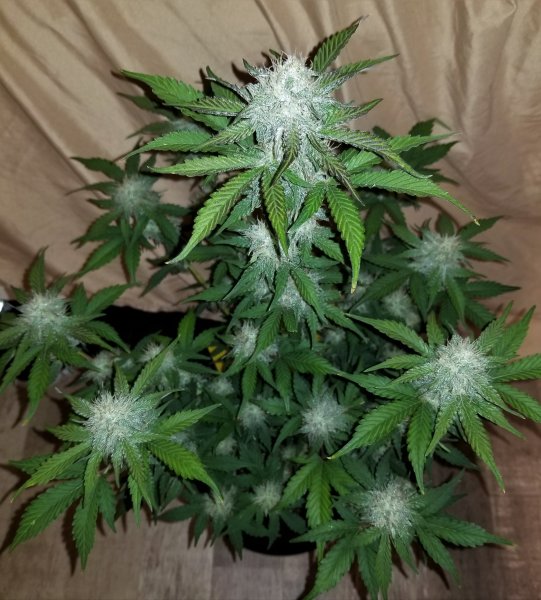 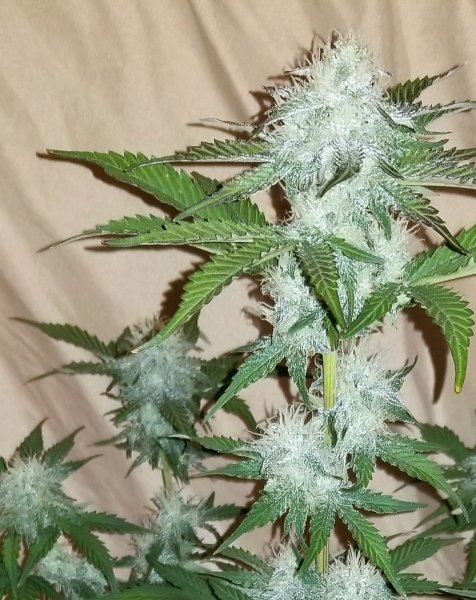 What's the longest you've seen an auto go before showing preflower? My knows Candy is going on six weeks and nothing.

Well least its a good chance it's female because male Autos have a tendency to show up quicker then the female.
I had a Gabagoo Auto show balls in 3 weeks.

What's the longest you've seen an auto go before showing preflower? My knows Candy is going on six weeks and nothing.
Click to expand...

Hey bro.... um, just over a month and that plant finished at almost 5ft. 6wks is really unheard of and you may be dealing with a cross that hasn't been quite mastered yet and still throws some photo periods, needs to be taken a
few more gens to weed them out and keep breeding just fast showing autos until ya do.. flip your lights to 12/12
for a week and you should see the tops yellow.. sowwy.


WeedHopper said:
Well least its a good chance it's female because male Autos have a tendency to show up quicker then the female.
I had a Gabagoo Auto show balls in 3 weeks.

Typically a male will show around week 2 in most Autos.. give or take. 3wks for a male is actually long, but I say if an auto takes 4wks to show sex, then it's vegging longer and filling out better. long as they show sex under 18/6 eh?
My Gabagoo 2 are looking pretty nice.. 2 shorties taking after the Sour60 side more and one nice bushy one ..

And, remember the up potting testing I was doing to show you the difference between a plant up potted right
after showing sex and one that was left in a 1gal pot..
Gamhazn F3.... 2 left in their 1gal pots, 1 up potted at around week 3. 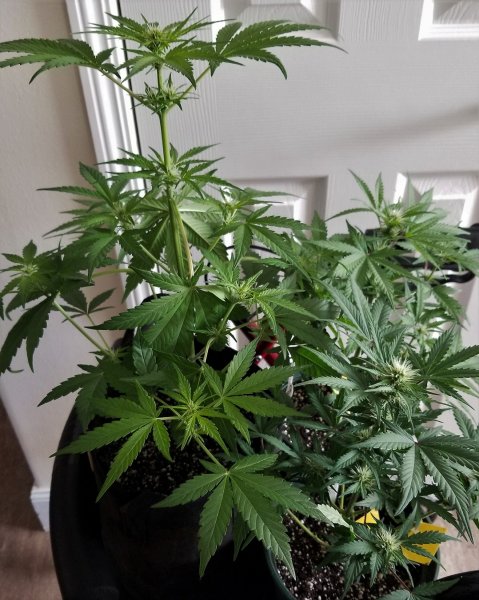 The 2 not up potted... smaller but the roots being given less room they are flowering faster... 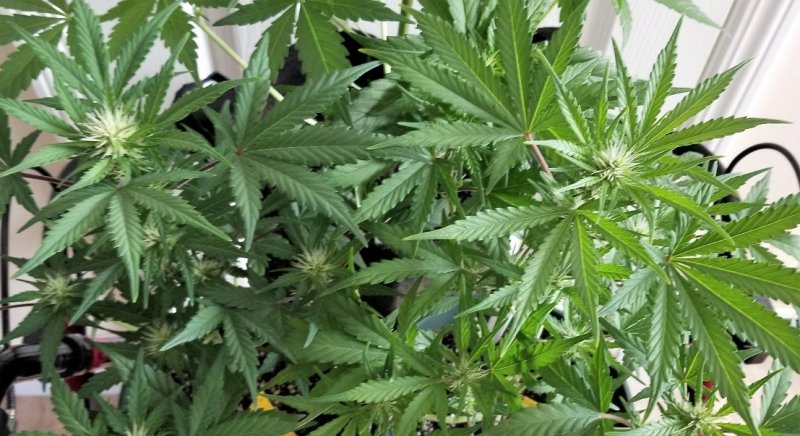 Since this is pretty much my Auto thread now lets just keep it going as such and I'll continue to show you my methods of madness here ok...

The smaller tent is the veg tent. and sometimes flowering too... running 3 small lights that do well. 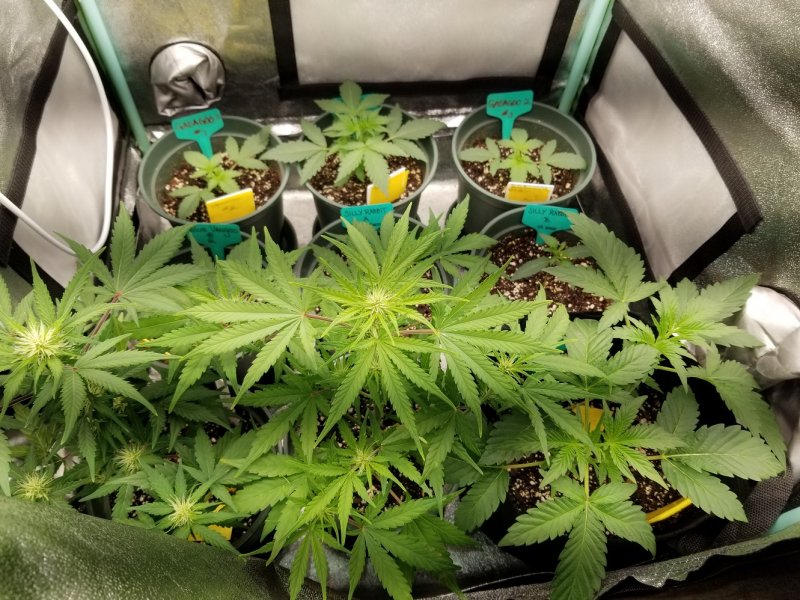 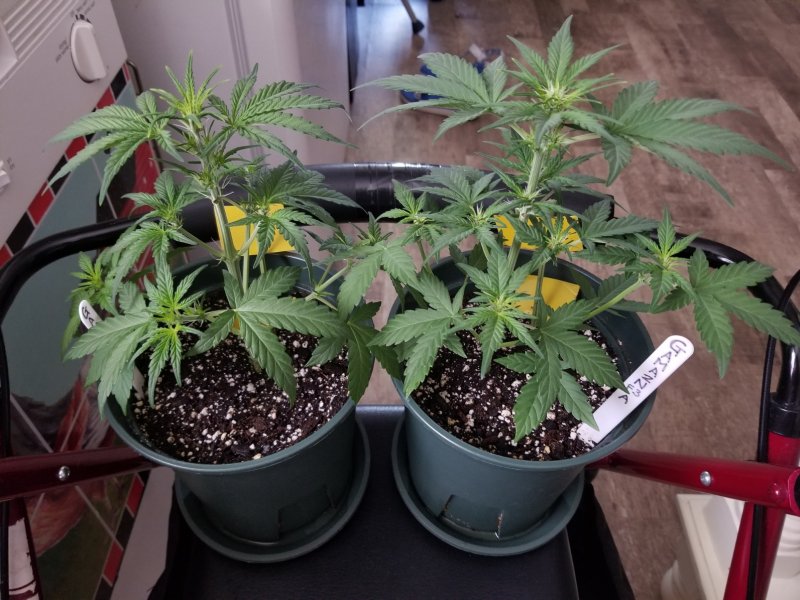 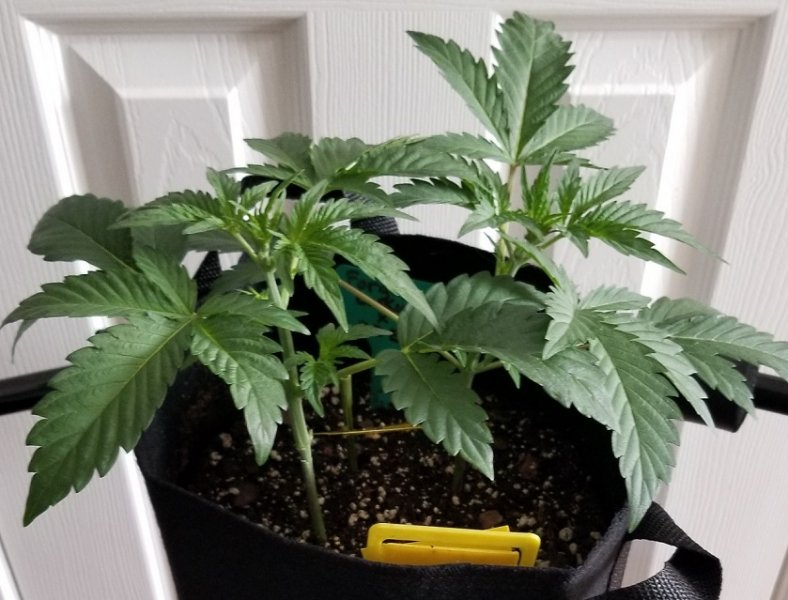 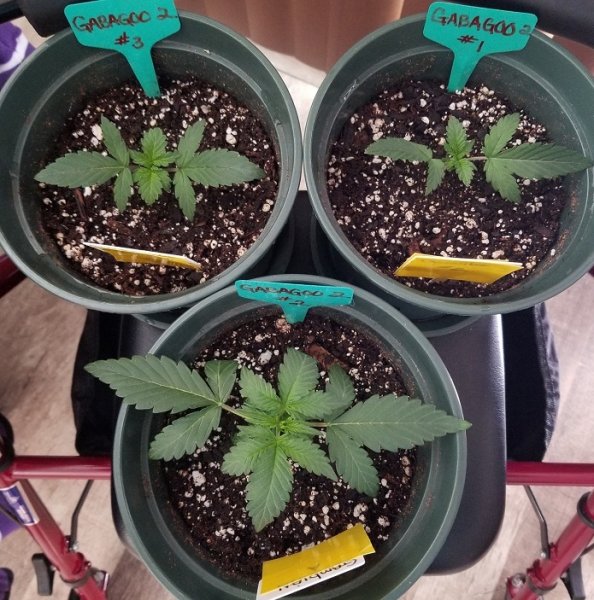 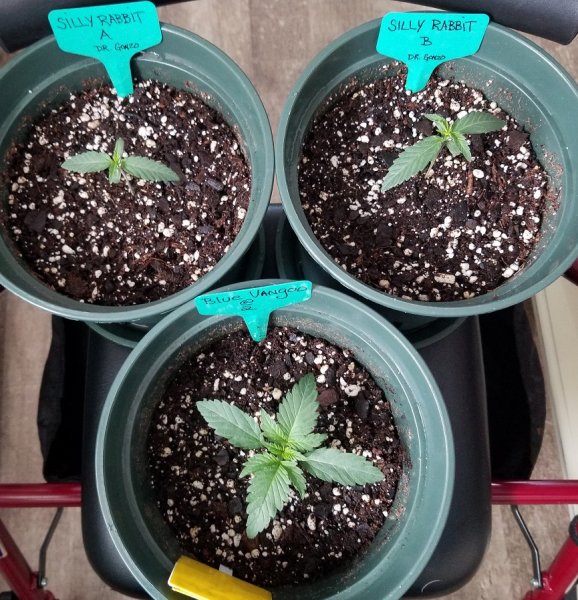 My Blue Vangoo is doing good. Got 3 Mister Magoos growing. One is kicking the others ass though but it's in the sun more. I'll show pictures later. Had no luck with the Miss Piggy's. She is playing hard to get

Hi ya Carty all your plants are looking great. Thanks for the tips. I'll be starting some of your Auto's as soon as my pots come from ups. I know Baby Yoda is going to be one plant. And I'm going to do another outside I haven't decided which one yet. Maybe Bruse Banner Auto Fem. Happy Growing.

Have a look see at the difference in leaving them in 1gal vs 2gal. Rear one was done, front not done
the one left in the 1gal one is finishing a little faster but with no size to it..

The small Tent A is now in flower.. using new fatter lower profile cheapo 2gal felt pots in here... R/R is the last Gamhazn F3 in that horrible soil.. plant is not happy as you can see... 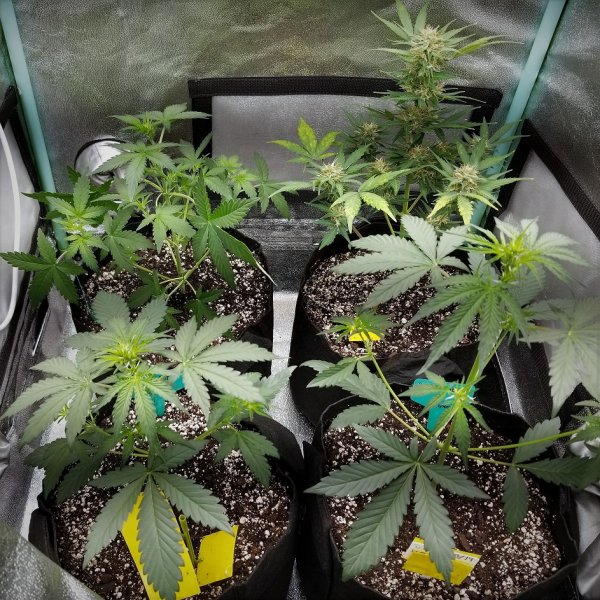 Gabagoo 2 at L/R and Dr Gonzo's 2 Silly Rabbit plants up front... all females just up potted at week 3 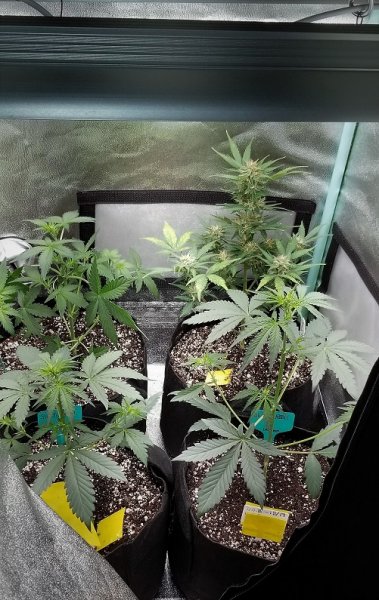 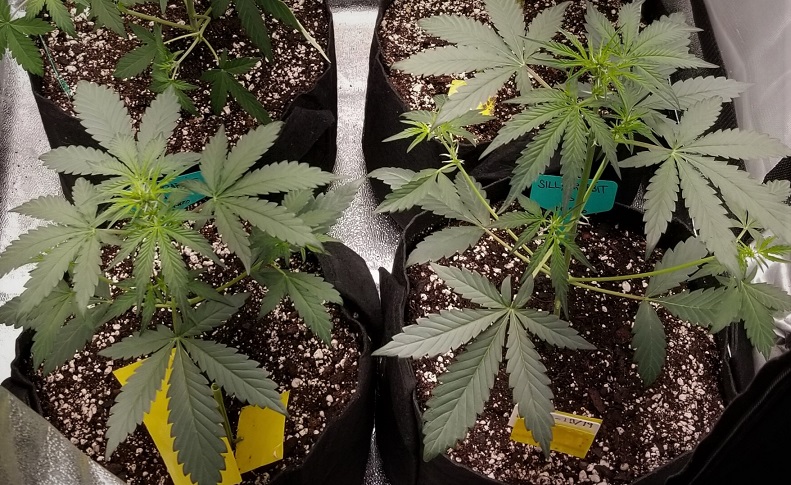 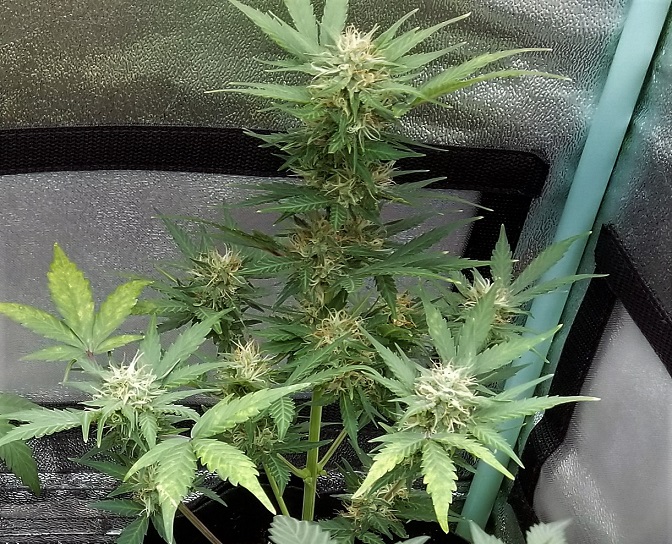 Hi ya Carty thank you for showing the different in 1gal or 2gal pots. All your girls are looking great.

Location
Somewhere in the deep recesses of my mind

Hey brother hope you and ladybug are doing well. She gets past that surgery and you will not keep up with her.

ness said:
Hi ya Carty thank you for showing the different in 1gal or 2gal pots. All your girls are looking great.
Click to expand...

Nice to see the side by side.. watering is tricky in smaller pots and takes twice as much time to do it right..
easiest way is to run them 3 wks in 1gal pots, then up pot right after showing sex to permanent homes..
2gals is quite enough, larger yielding strains I'd go 3gal..

thanks Ness... next up is a little SOG grow using 1gal pots start to finish... all about early trimming..


giggy said:
Hey brother hope you and ladybug are doing well. She gets past that surgery and you will not keep up with her.
Click to expand...

Have had a few challenges but all in all things are going pretty good... she's recovering just awesome, girl is
so strong it's amazing..
and yeah, I get my 1st hip done soon as she's recovered, then the other... so then with my bionics I should be able to keep up with her.. hahaha

Soaked the seeds for 24hrs and already started to crack open... so I skipped the paper towel method and they went right into the dirt... Roots Organics for these little feminized ladies... 8 in 1gal pots running a small SOG method... never tried this technique but have always wanted to... so here goes. 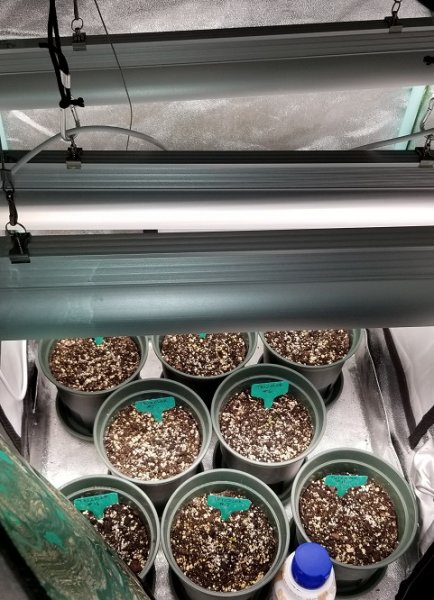 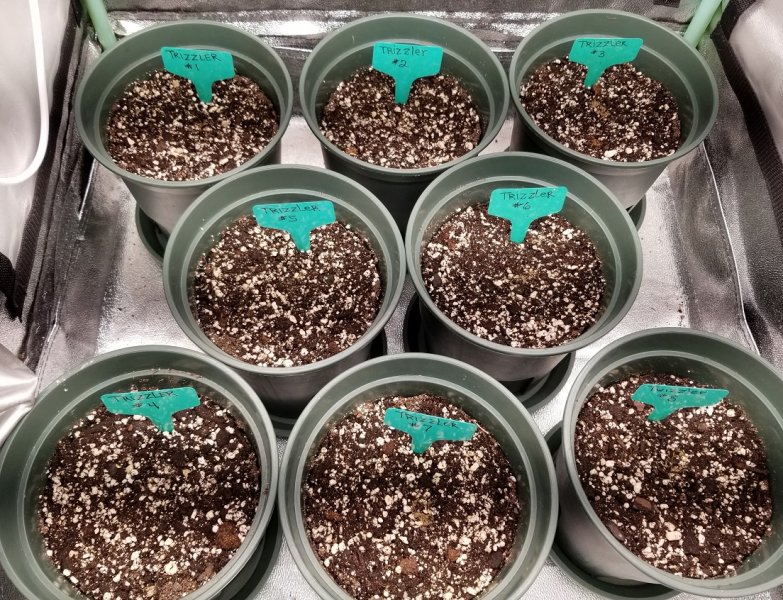 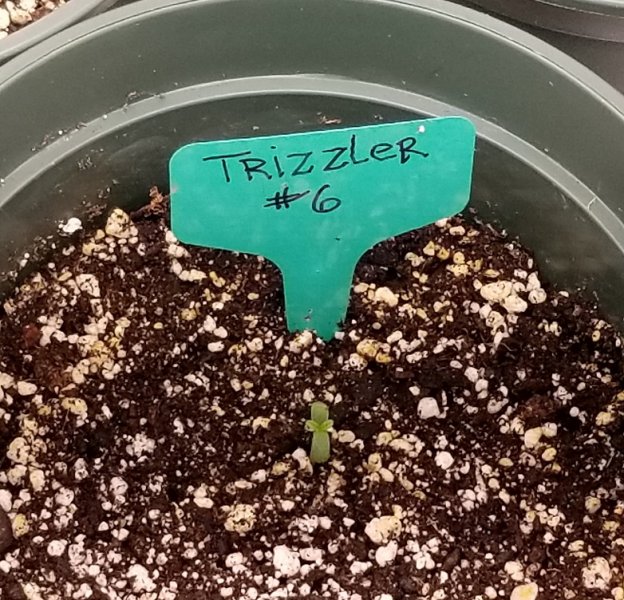 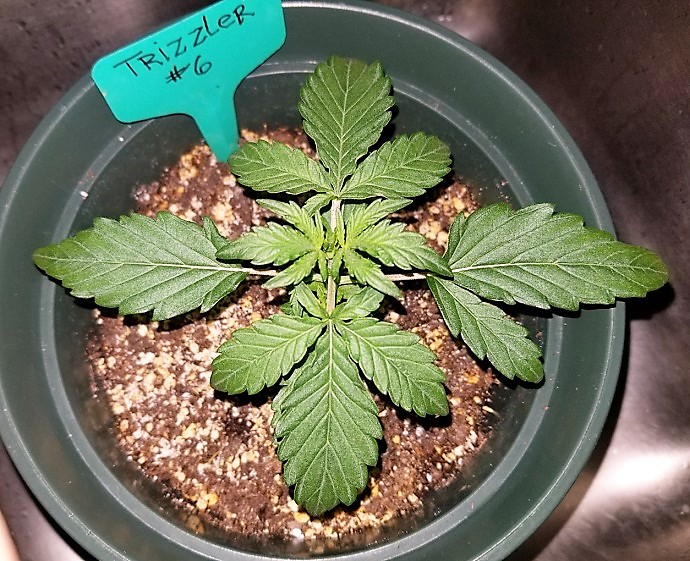 I am loving the results of changing my foods to Humboldts Secret Formula.. and this is just using their part A&B for now.. I plan on picking up the main 6 I need to follow their chart.. for now my
silica will have to do vs theirs.. lol.

Also, the soil is Roots Organics this run and even though I can feel the formula has changed since they sold out.. no big chunks of guano I had to break up, no black gooey hands at the end.. but still decent soil and very fast draining..

The Gabagoo 2 that were up potted are doing incredible in their 2 gal felt pots of Strawberry Fields soil..

Actually, they've put on quite a bit of weight since these photos were taken just 3 days ago.. tonight they got a good feeding with a dose of Mammoth P.. 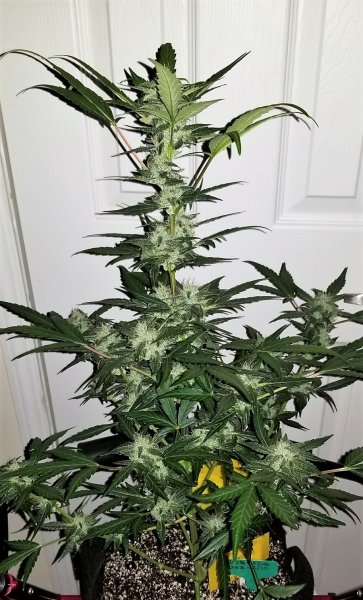 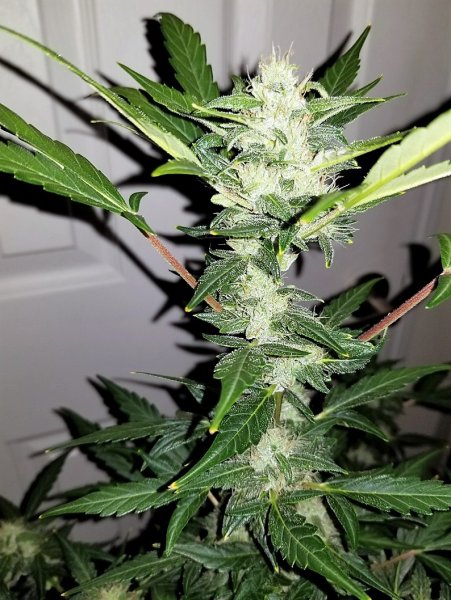 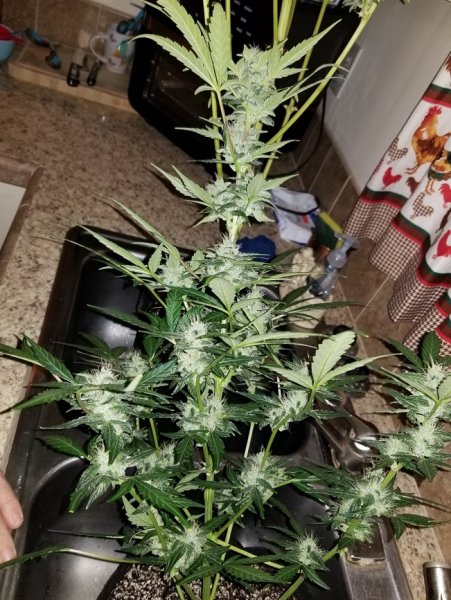 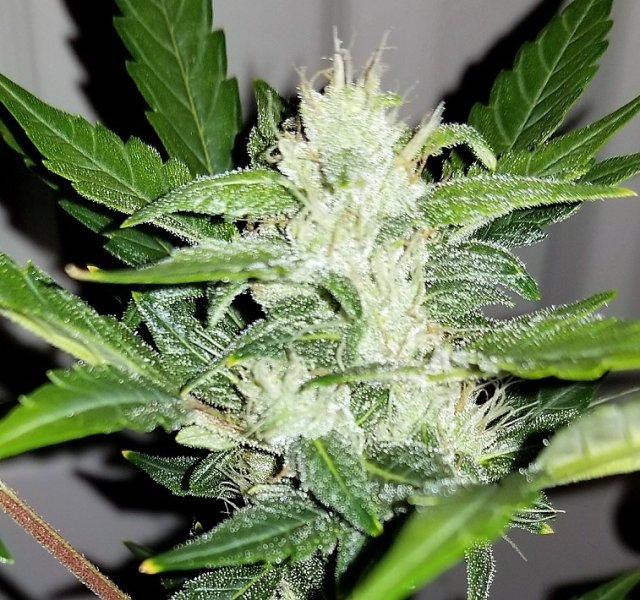